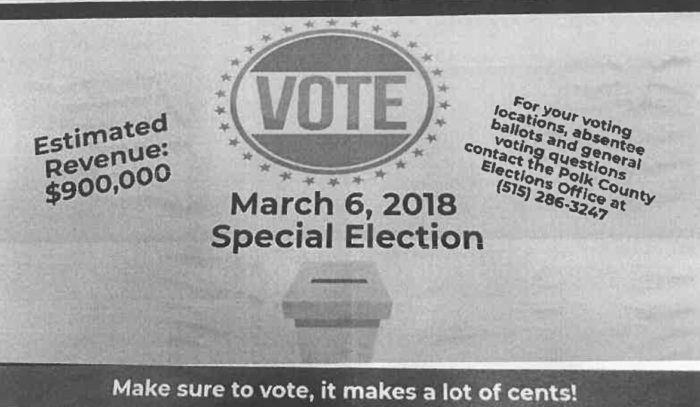 The Iowa Ethics and Campaign Disclosure Board voted unanimously on July 13 to fine and reprimand the city of Windsor Heights for sending a mass mailing that appeared to advocate for passage of a local-option sales tax in Polk County.

Iowa Code 68A.505 forbids state or local governments from spending public money “for political purposes, including expressly advocating the passage or defeat of a ballot issue.” Haley O’Connor filed a complaint with the ethics board after receiving this city-funded mailer, which went to all Windsor Heights households a few weeks before the March 6 election. 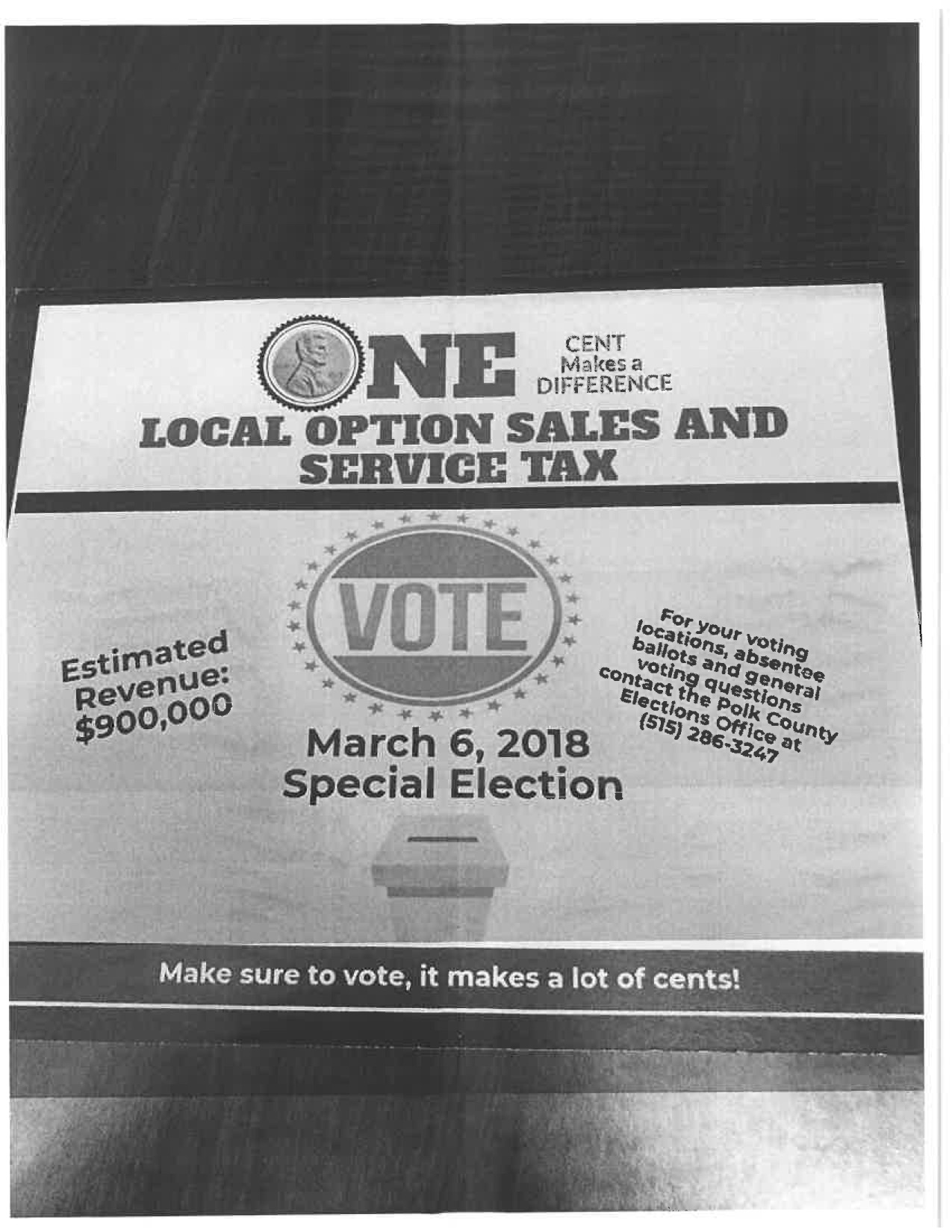 Writing to the ethics board on behalf of the city, attorney Erin Clanton argued that Iowa Code defines “express advocacy” as messages containing “explicit words that unambiguously indicate that the communication is recommending or supporting a particular outcome in the election […].”

The mailing piece at issue in the Complaint states “Make sure to vote, it makes a lot of cents!” It is the City’s position that this language does not expressly advocacy [sic] for the passage of the LOSST ballot measure, as that term is defined in the Iowa Code, but rather makes reference to a measure that could have a financial impact on metropolitan cities. There was no intent on behalf of City staff to expressly advocate for the passage of the LOSST ballot item, but only to inform the public of the March 6, 2018 special election and encourage the public to vote. Regardless, the City understands the concerns raised by the mailing and, in the future, will make certain to avoid any language in such mailings that could be construed as express advocacy for or against a position. […]

After discussing the matter in closed session at their July 13 meeting, the six ethics board members agreed that the Windsor Heights mailing crossed the line to advocacy. Even without a direct call for a yes vote, the phrases “ONE CENT Makes a DIFFERENCE” and “it makes a lot of cents!” put a positive spin on a tax that would have generated an additional $900,000 in revenue.

The Iowa Ethics and Campaign Disclosure Board doesn’t always punish entities that violate election-related statutes. Sometimes remedial action, such as correcting an erroneous report, is sufficient to resolve a complaint. But this time, the board sent a message by approving a reprimand and a $500 fine, the maximum civil penalty allowed through an administrative resolution.

The City will certainly be more careful in selecting language moving forward.

Local officials should remember this case the next time they draft publicly-funded communication about any election. School districts have often skated close to the line in educational materials about bond initiatives. Iowa’s campaign regulator has now determined that the legal prohibition on “expressly advocating the passage or defeat of a ballot issue” doesn’t only refer to materials containing the magic words “vote yes” or “vote no.”

Also on July 13, the ethics board unanimously dismissed a complaint charging that the city of Des Moines improperly used public resources to advocate for the local option sales tax. The e-mail message at the center of that allegation was more neutral than the Windsor Heights mailing, didn’t require a special expenditure for printing or postage, and targeted only e-mail list subscribers (not all city residents).

The local option sales tax could come before some Polk County voters again as soon as next year. A new Iowa law allows cities in three counties (including Polk) to approve such taxes regardless of how neighboring towns vote. *See update below. Previously, state code considered contiguous cities as a bloc for these elections. On March 6, residents of suburbs that opposed the sales tax by large margins gave “no” a slim majority in the ten municipalities with touching borders. That prevented the extra penny sales tax from taking effect in Des Moines, Windsor Heights, and West Des Moines, where voters approved the ballot initiative.

Appendix: July 10, 2018 response from the city of Windsor Heights to the Iowa Ethics and Campaign Disclosure Board. 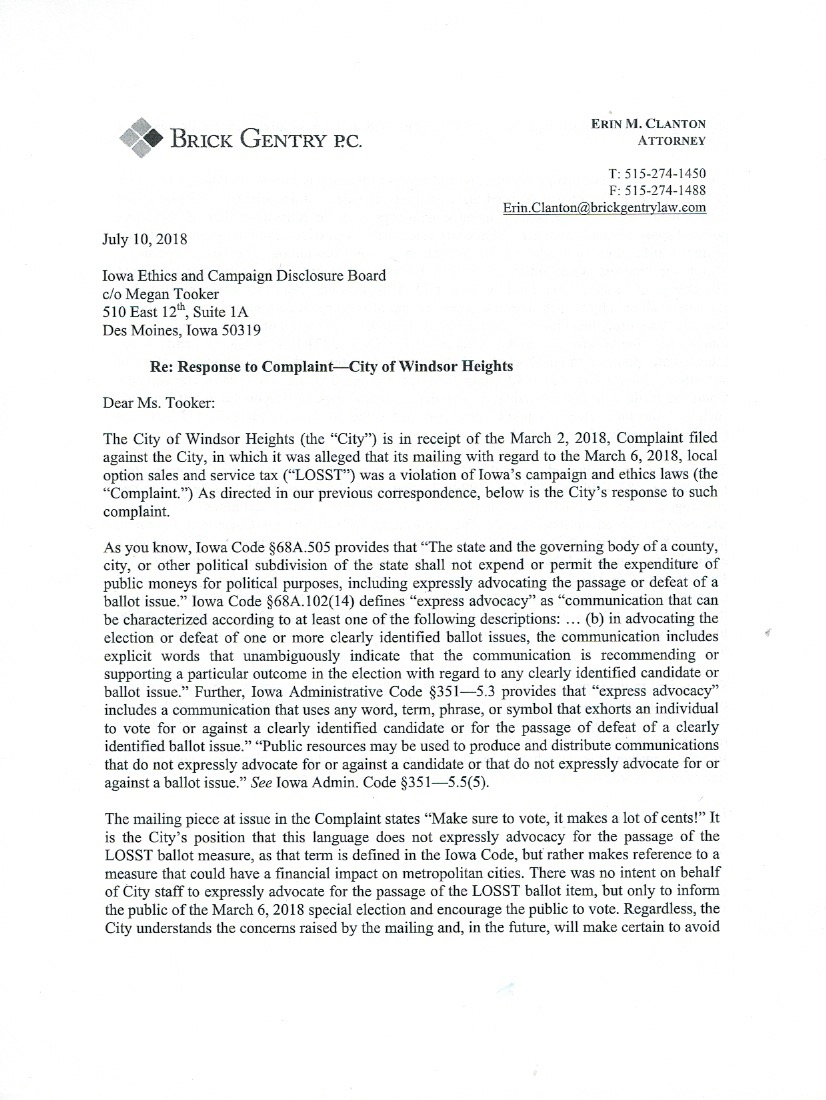 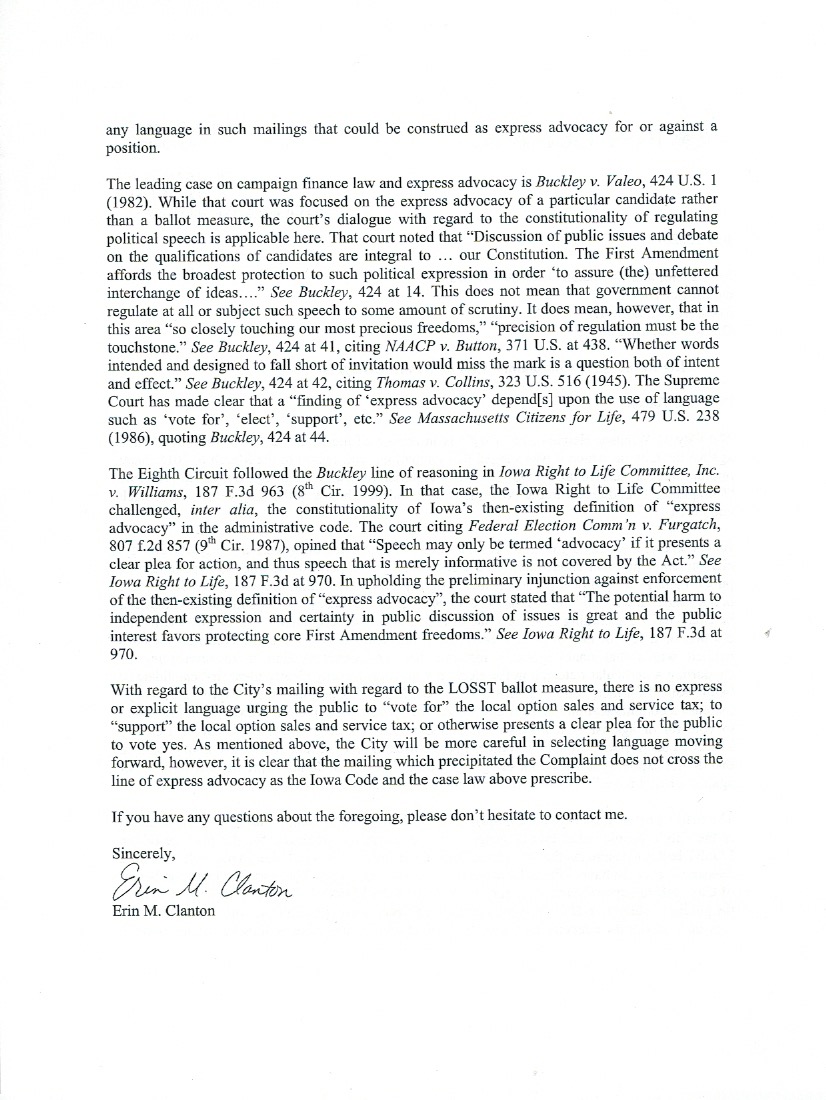 *SECOND UPDATE: In the comments, Bleeding Heartland user cr_citizen noted that the section of the new law dealing with local option sales tax votes does not apply statewide.

That only affects three counties in Iowa: Polk, Johnson, and Dallas (respectively).

The other 96 counties in Iowa are all still subject to contiguous-bloc voting and allowed any percentage to property tax that they’d like for LOSST.

SECOND UPDATE: The board released its reprimand and civil penalty order on July 20. After explaining its legal analysis and the $500 fine, the letter states, “The Ethics Board cautions the City to be more careful with its communications in the future when discussing ballot issues or candidates. The Board will consider a more significant civil penalty in the future if the City violates section 68A.505 again.”