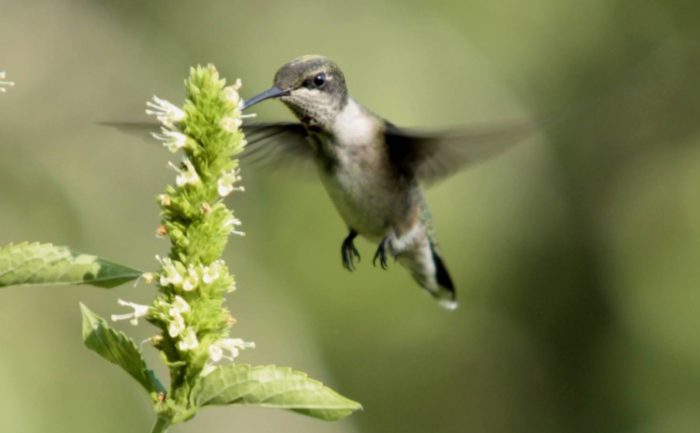 Some flowers are much more difficult to photograph than others. For years, I've wanted to feature yellow giant hyssop (Agastache nepetoides) in this series, but I have struggled to capture clear images of the tiny yellow flowers.

Ecological consultant Leland Searles came to the rescue. Not only is he one of Iowa's best resources on native plants, he is also a gifted photographer. Leland has previously shared his pictures of Golden Alexanders, various sedges, northern prickly-ash, and the rare leatherleaf with Bleeding Heartland readers. This week he provided some gorgeous shots of yellow giant hyssop, including an incredible picture of a ruby-throated hummingbird sampling these flowers.

Yellow giant hyssop is native to most states in the eastern half of the United States. Leland noted that it is an "open woodland, savannah, or woods edge species." I've seen some growing near trails and also deeper in the woods, in partial shade. I don't recall finding it in plantings, but the related purple giant hyssop is now blooming in flowerbeds outside the Des Moines Public Library branch on Franklin and near the Meredith trail between Gray's Lake and downtown Des Moines. Anise hyssop is shorter than either of its relatives and is most easily identified by the scent of a crushed leaf.

Leland took this picture of "the earliest leaves to emerge, with the thick square stalk from the prior year" in a private yard in Des Moines in March 2015. 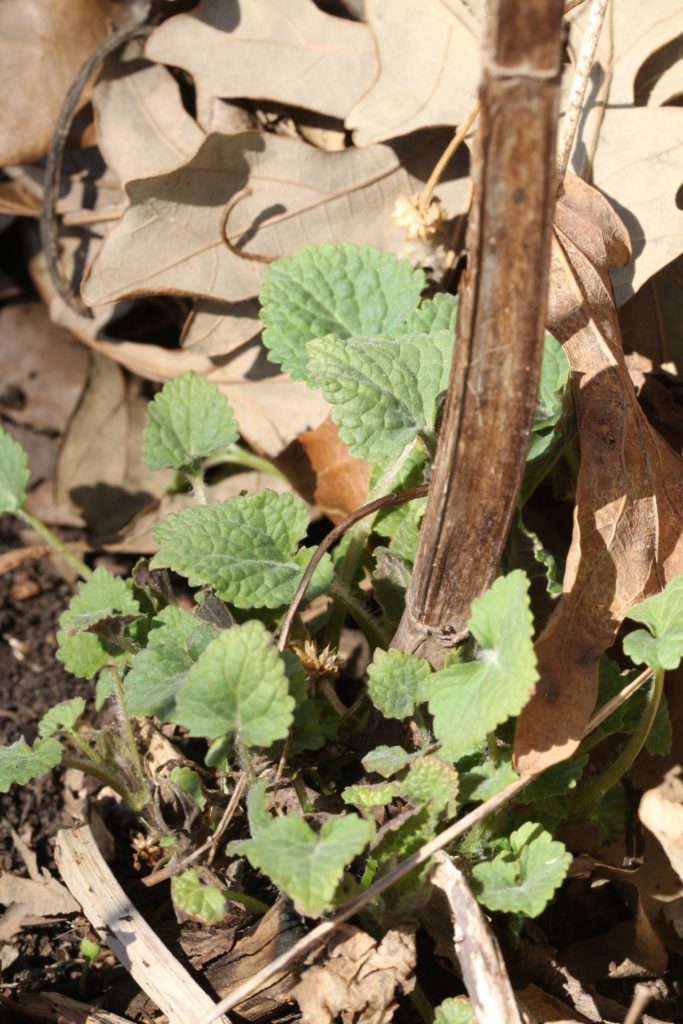 Leland found these yellow giant hyssop stems in May 2011. 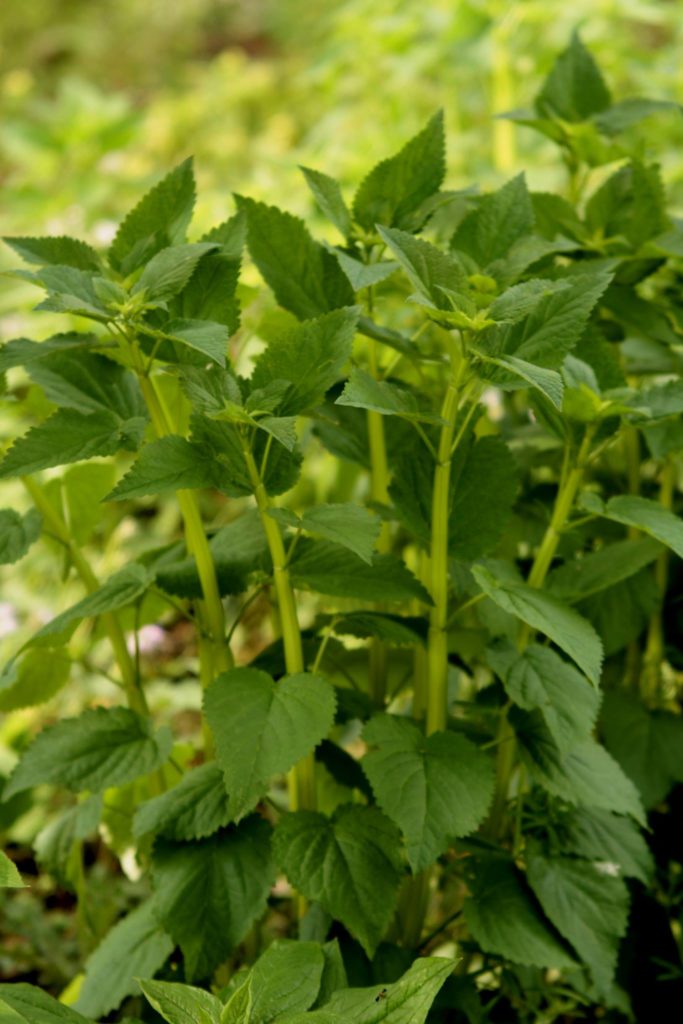 The pale yellow flowers are not very showy because they seem small in comparison to the rest of the plant and only a few flowers are in bloom at the same time. Thus, the attractiveness of Yellow Giant Hyssop consists primarily of its foliage.

I took these pictures last August, along the Windsor Heights bike trail in Polk County. Notice how few flowers are blooming. 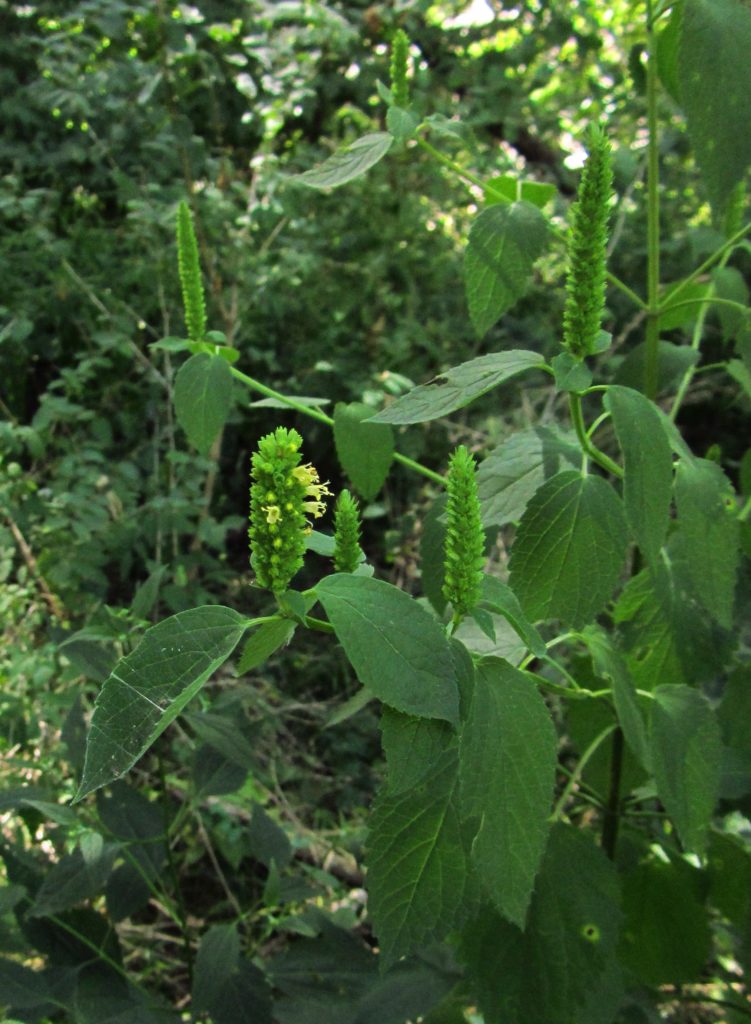 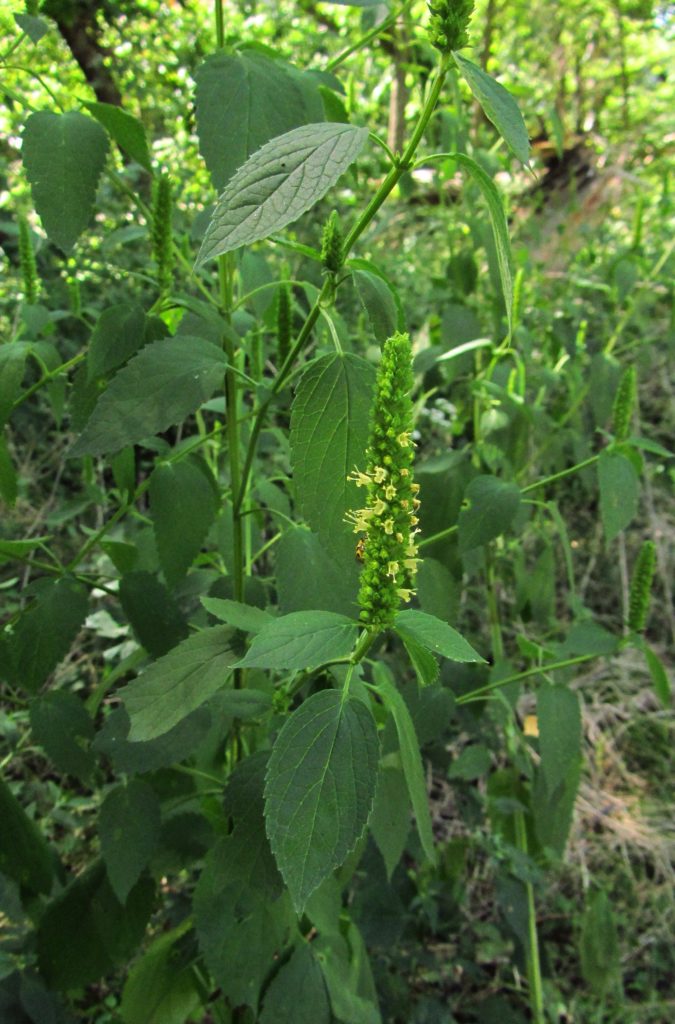 This is my best effort at a close view of yellow giant hyssop flowers, from the woods on Mike Delaney's Dallas County farm in August 2016. 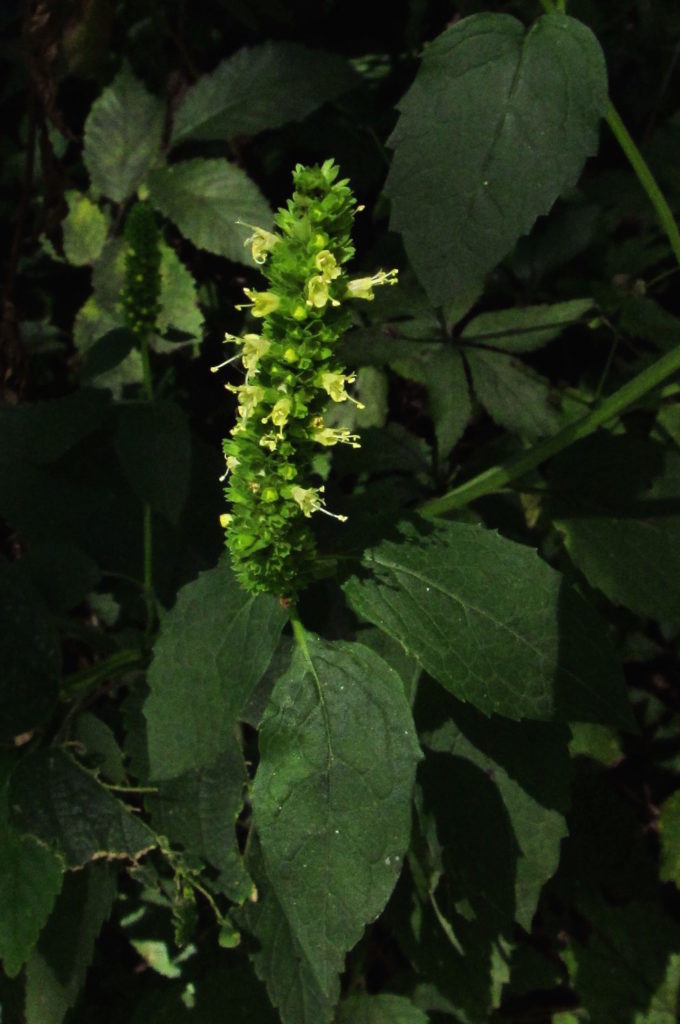 The flower parts are much more clear in Leland's photo, taken at Brown's Woods in West Des Moines in August 2015. 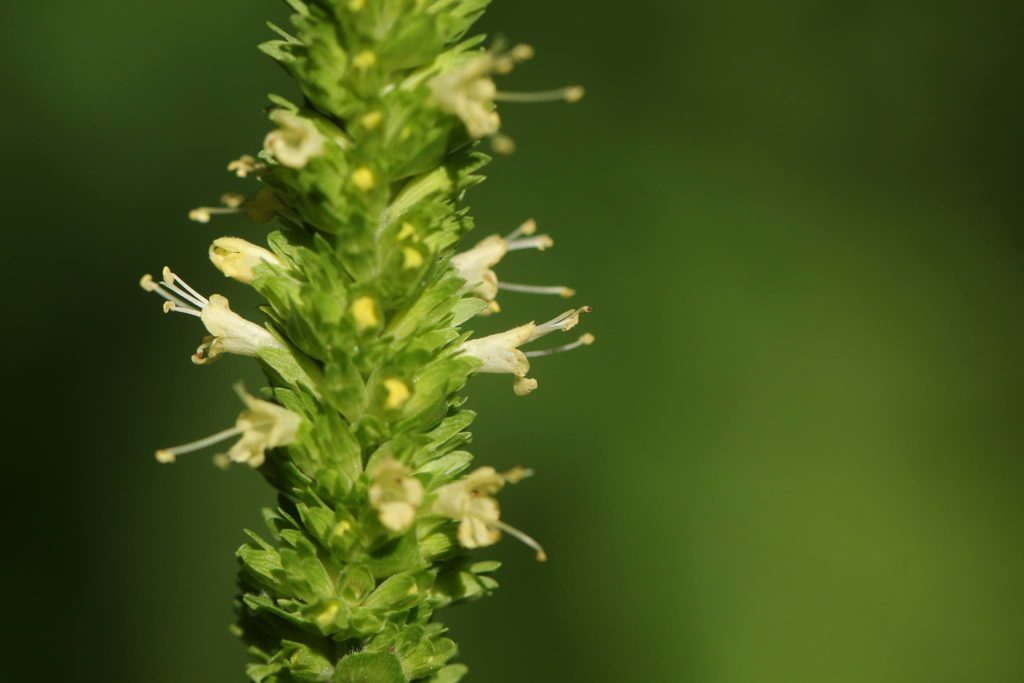 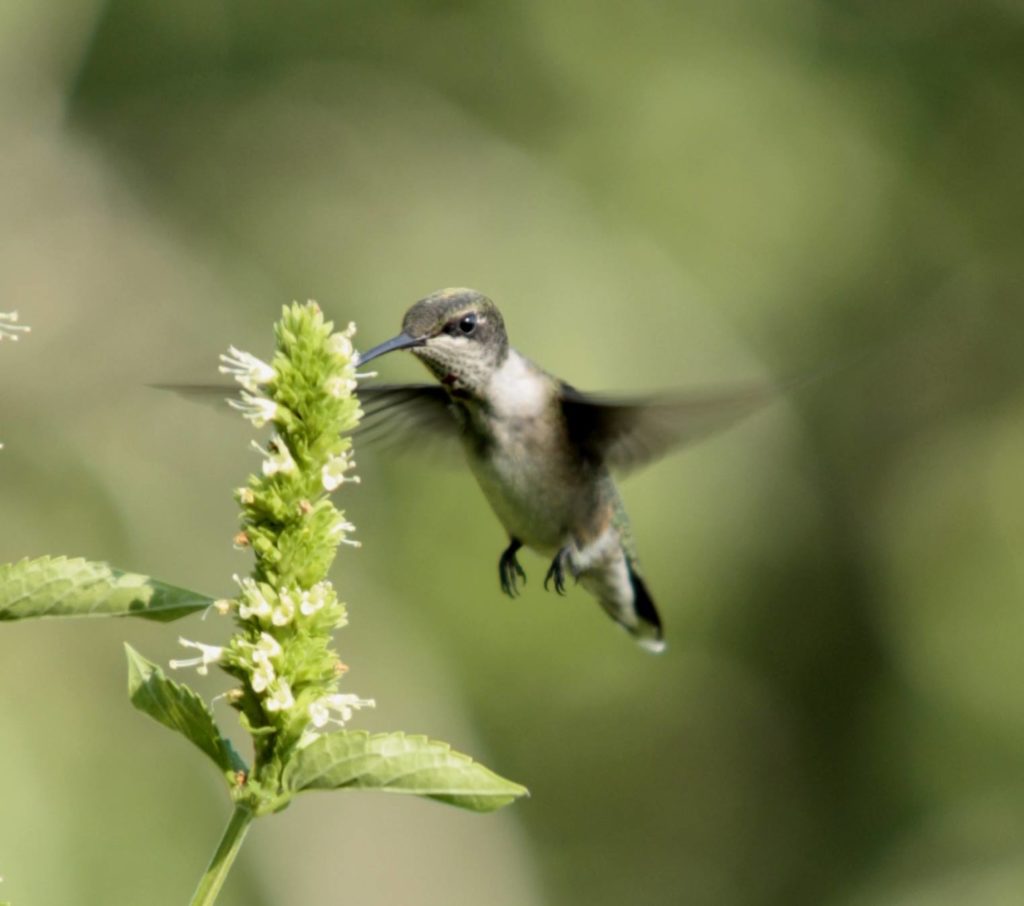 After yellow giant hyssop goes to seed, the plant will remain visible for months. Leland commented on his photograph from December 2013, "while the dry plant is somewhat fragile, it can persist for several weeks into winter. Distinguishing it from the similar Purple Giant Hyssop (A. scrophulariaefolia) in winter depends mainly on noting its location during bloom." 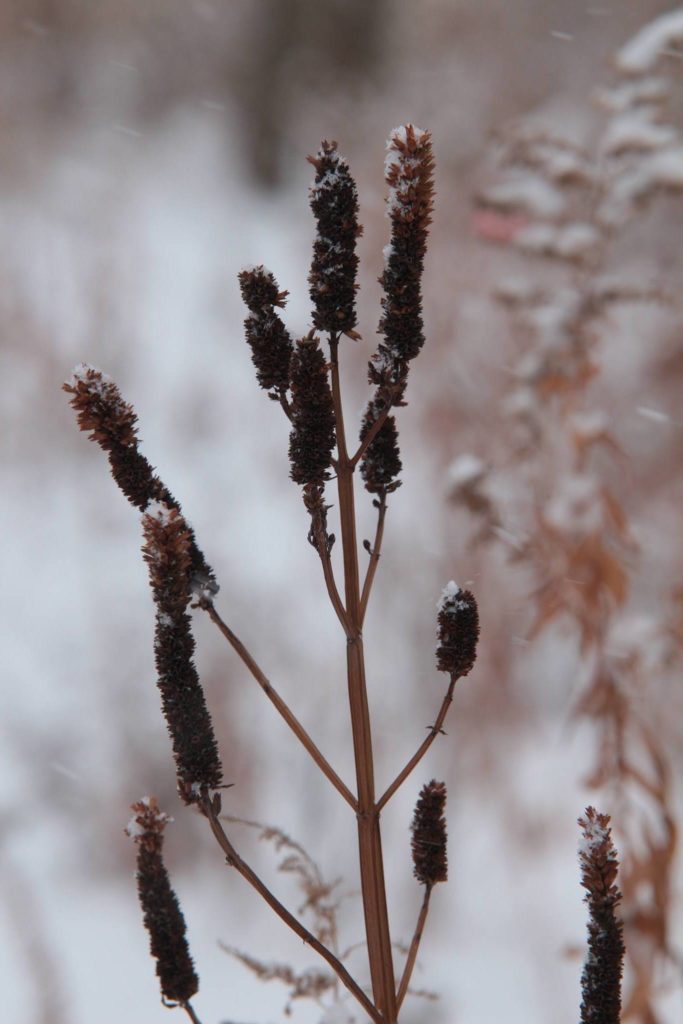