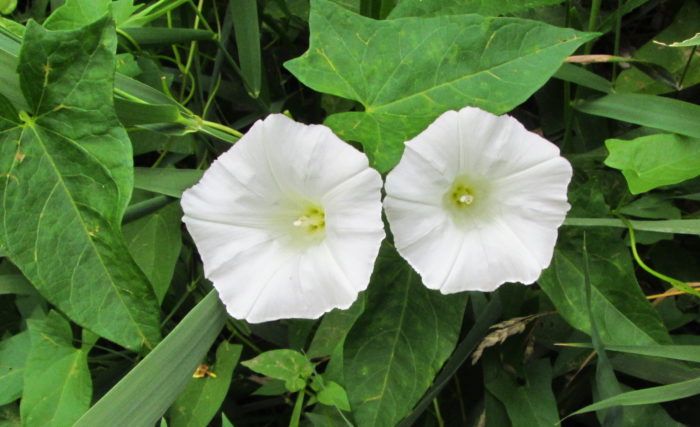 UPDATE/CORRECTION: Bleeding Heartland user PrairieFan speculated that I photographed the native vine Hedge bindweed, (Convolvulus sepium or Calystegia sepium). John Pearson of the Iowa Department of Natural Resources confirms: "The key character between the two species is the size of the bracts at the base of the flower: small in C. arvensis versus large (leaf-like) in C. sepium. The photos in your article that provide a profile view of the flowers show large, leaf-like bracts that would point to C. sepium." Hedge bindweed is also found across North America. Original post follows:

I haven't featured many vines in this series, other than bittersweet nightshade, bur cucumber, and wild grape. I've also rarely focused on non-native plants, with exceptions noted in the archive. So this week is doubly unusual.

Field bindweed (Convolvulus arvensis) originated in Eurasia but has spread to nearly every part of the U.S. and Canada. Don't go looking for this plant in high-quality habitats; according to the Illinois Wildflowers site, field bindweed "occurs primarily in disturbed areas" such as "lawns, gardens, fields, clay banks, areas along roadsides and railroads (including ballast), vacant lots, and miscellaneous waste areas." You probably won't want to cultivate it, but it may find its way onto your property.

It has considerable drought tolerance, and flourishes in poor soil that contains sand, gravel, or hardpan clay. [...] Eradication of this plant is difficult, as mechanical cultivation often spreads the rhizomes around, producing new plants. Because of the deep root system, it has been known to survive bulldozer operations. It can also persist in lawns, notwithstanding regular lawn-mowing. The application of broadleaf herbicides can be an effective control measure, if it is repeated as needed.

I took all of the pictures enclosed below last month along the Windsor Heights or Walnut Creek bike trails.

Field bindweed vines can start blooming in the late spring and keep producing flowers for months, "even though individual flowers persist for only a single day, usually opening during the morning and closing by late afternoon." The arrow-shaped leaves of field bindweed somewhat resemble arrowhead, but you can't confuse these species once the plants are blooming. Arrowhead flowers with white petals and yellow or green centers look nothing like field bindweed blossoms. 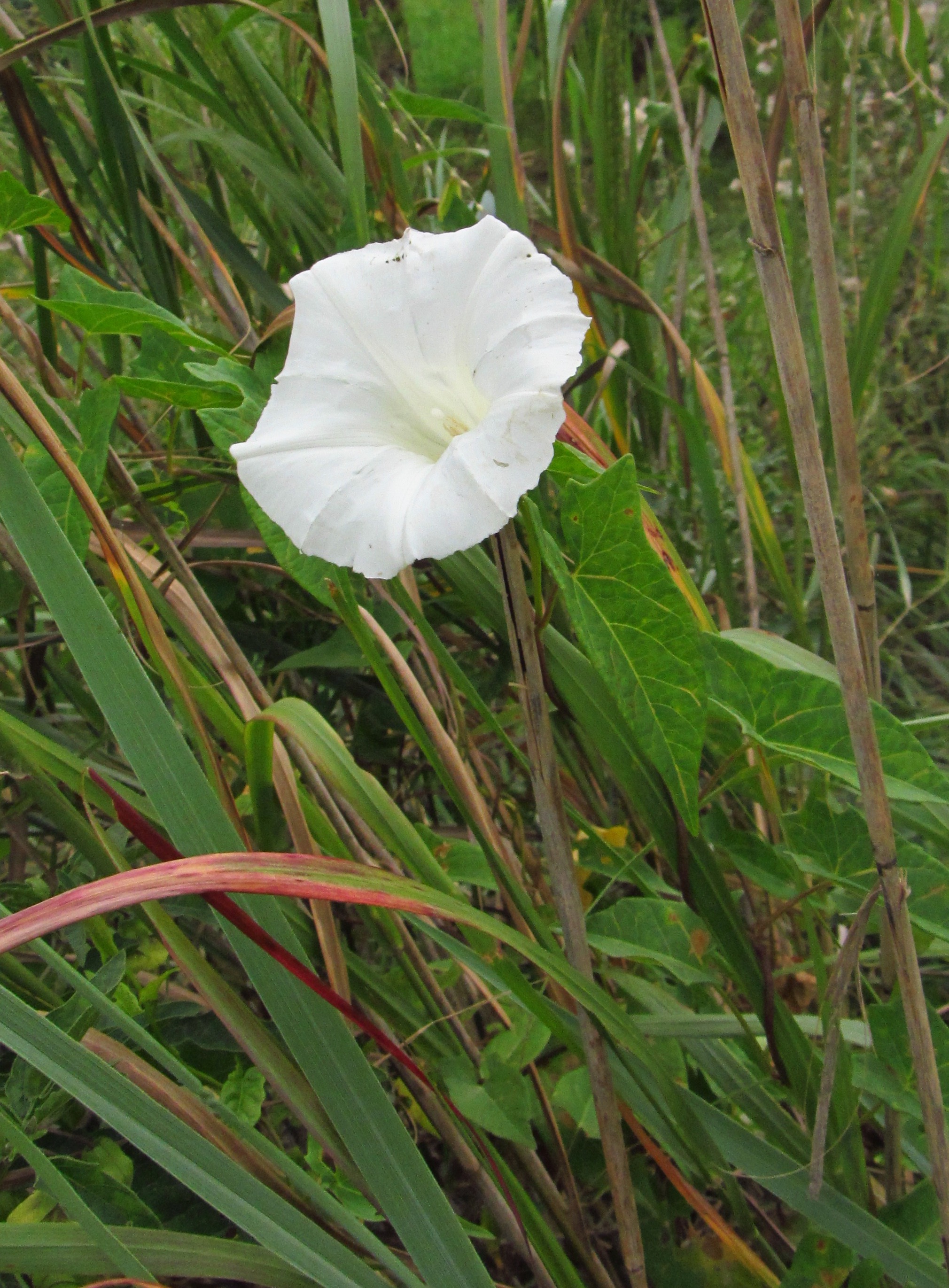 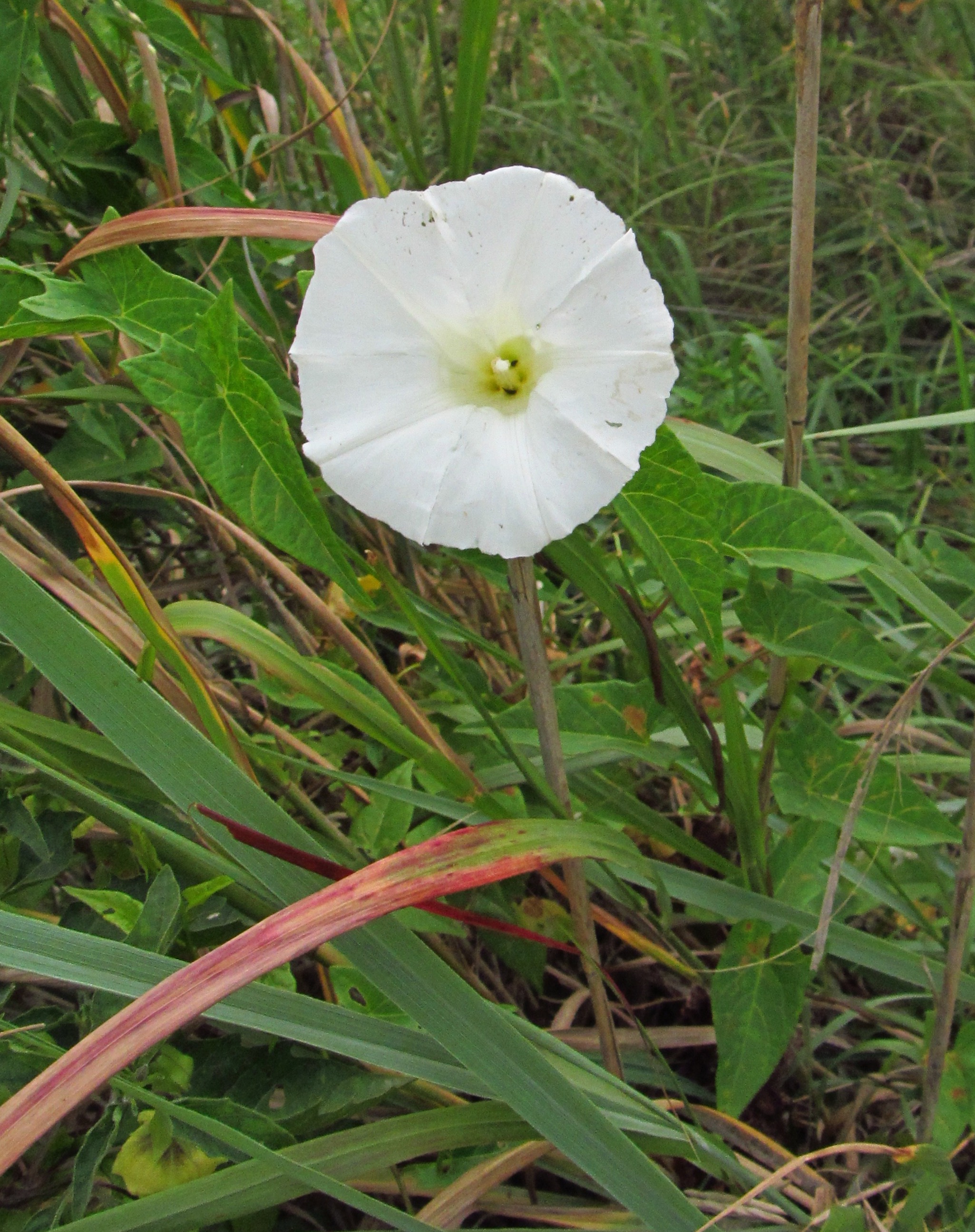 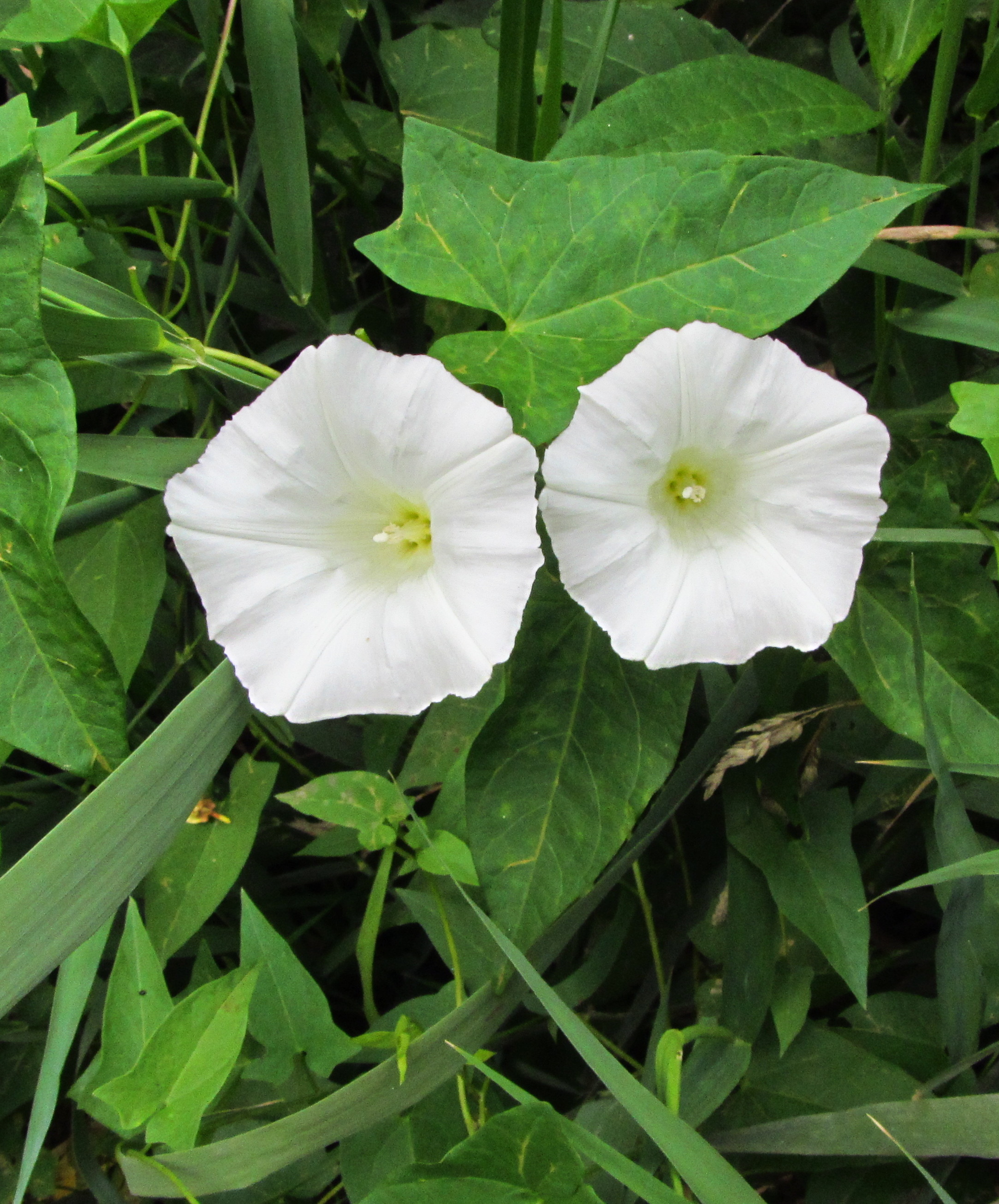 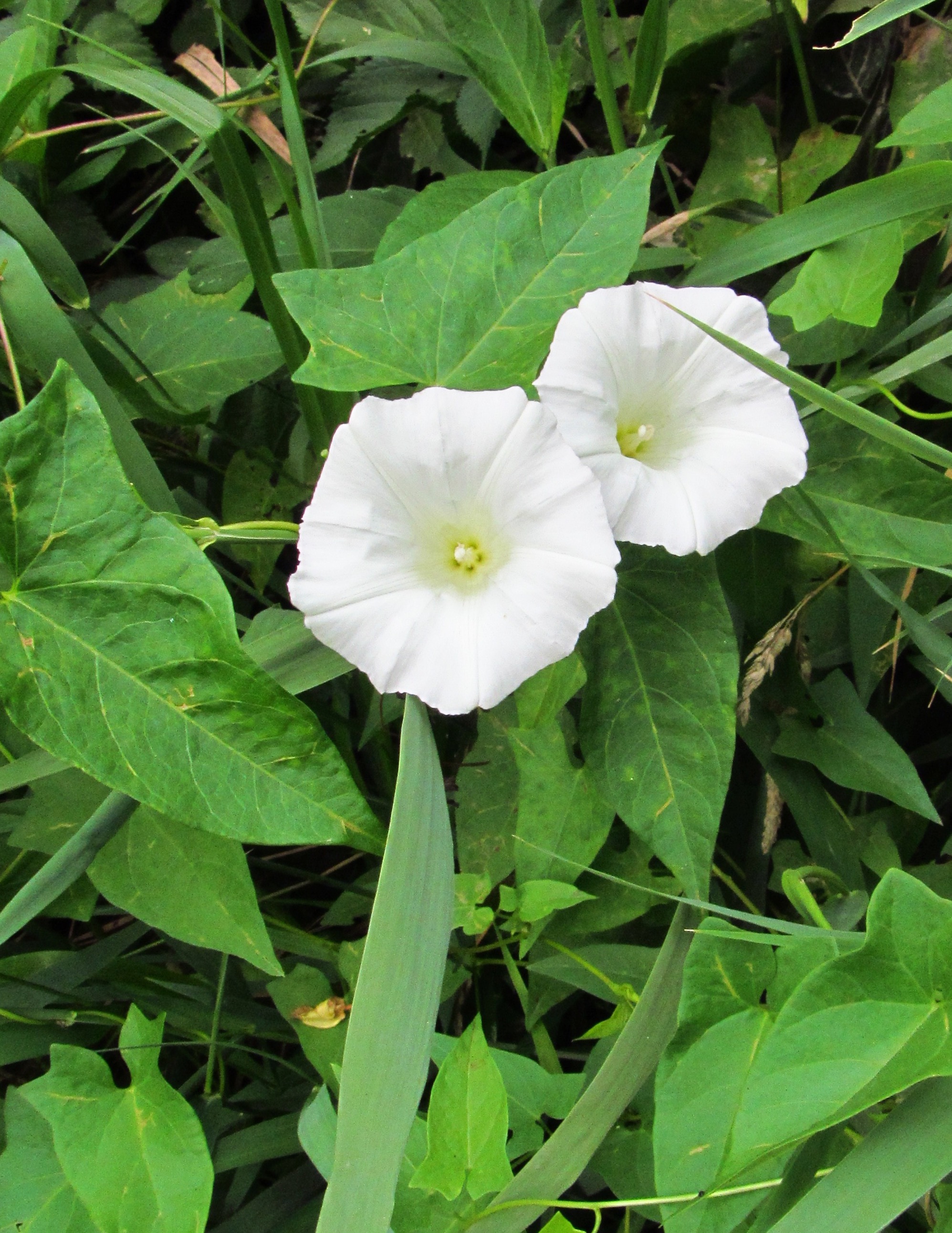 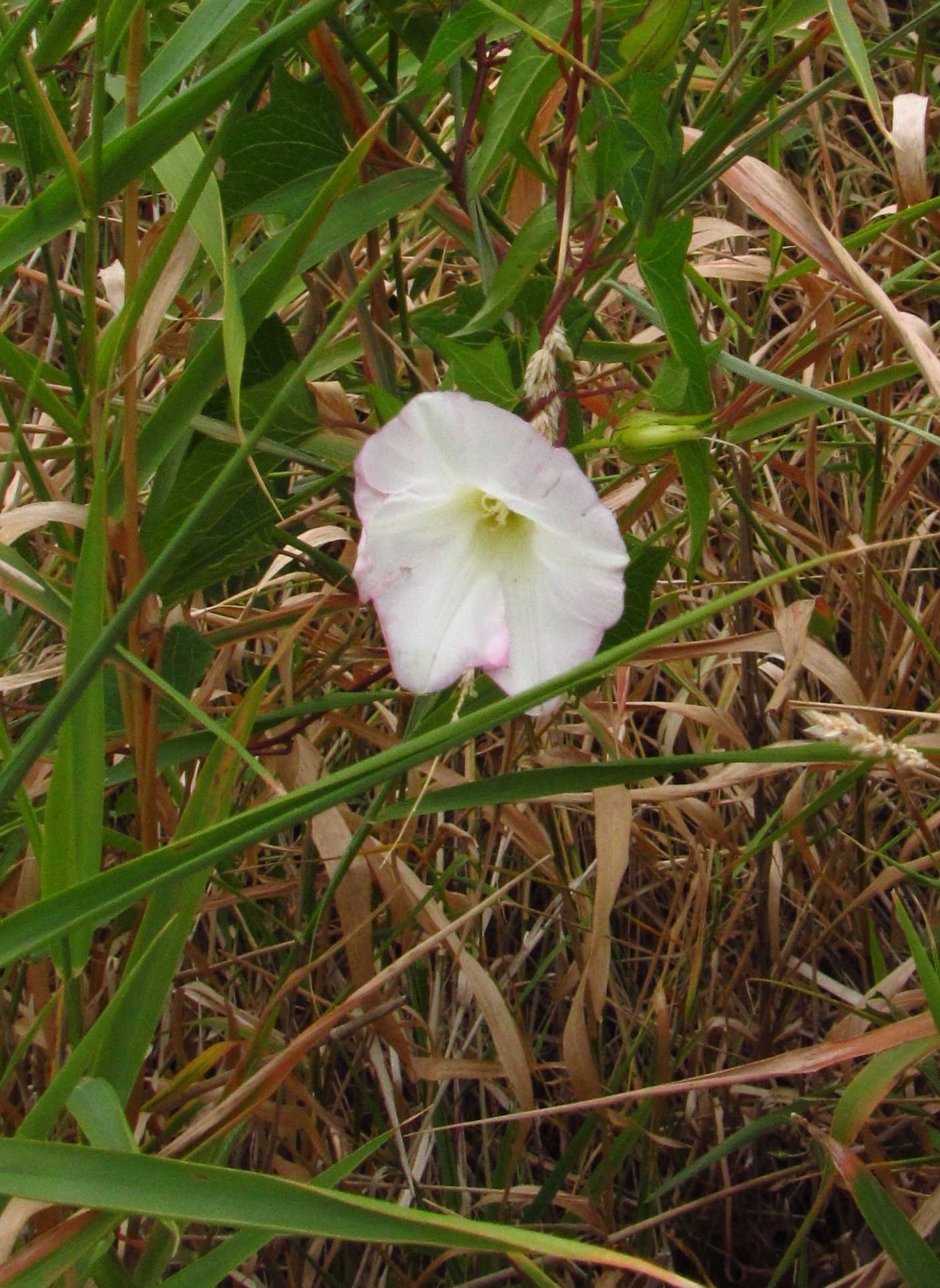 Side view of two flowers. The leaves in the center with toothed edges are not part of the bindweed; I think that's a wild grape vine. 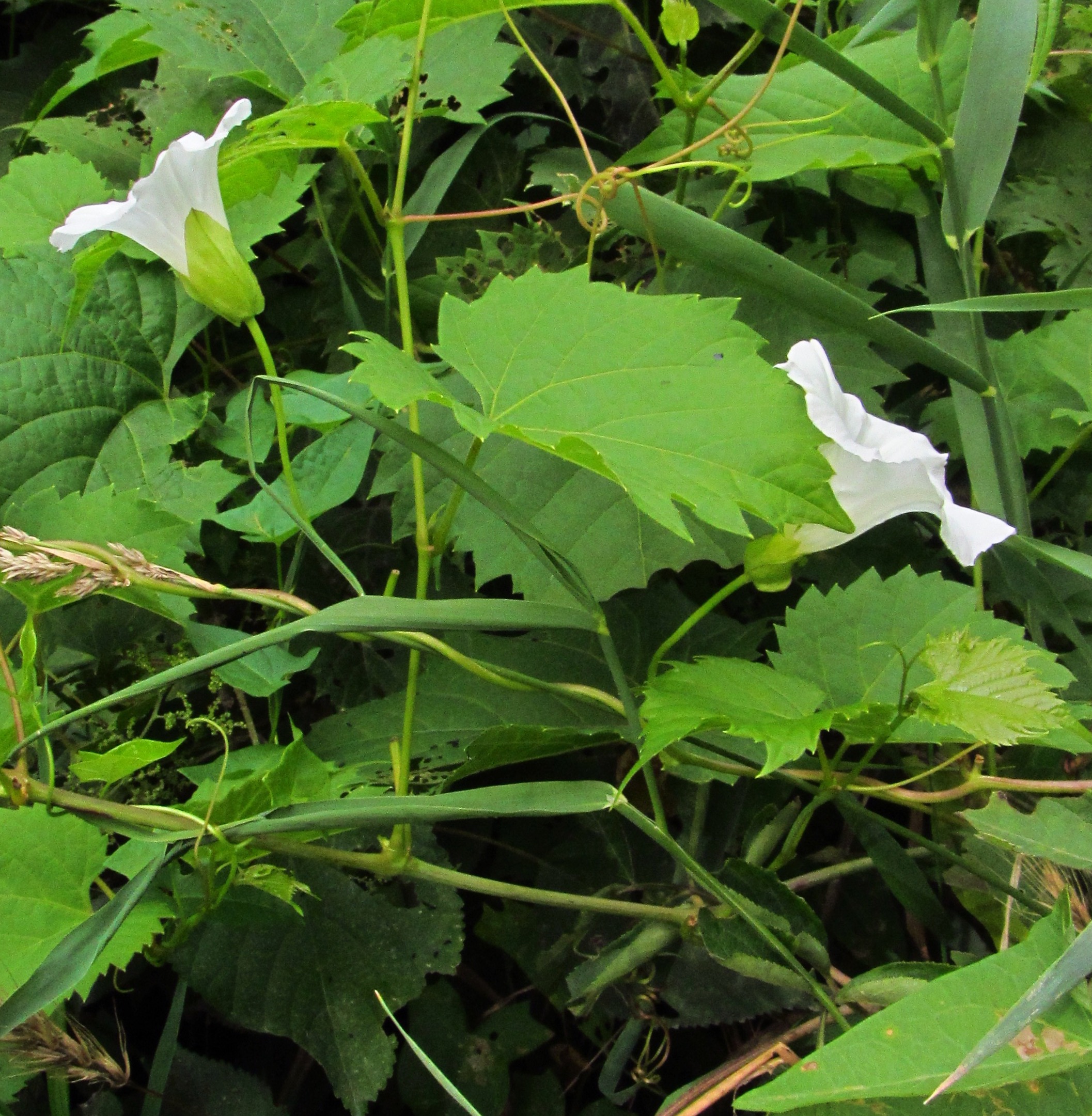 On the left, a bud hasn't opened yet. 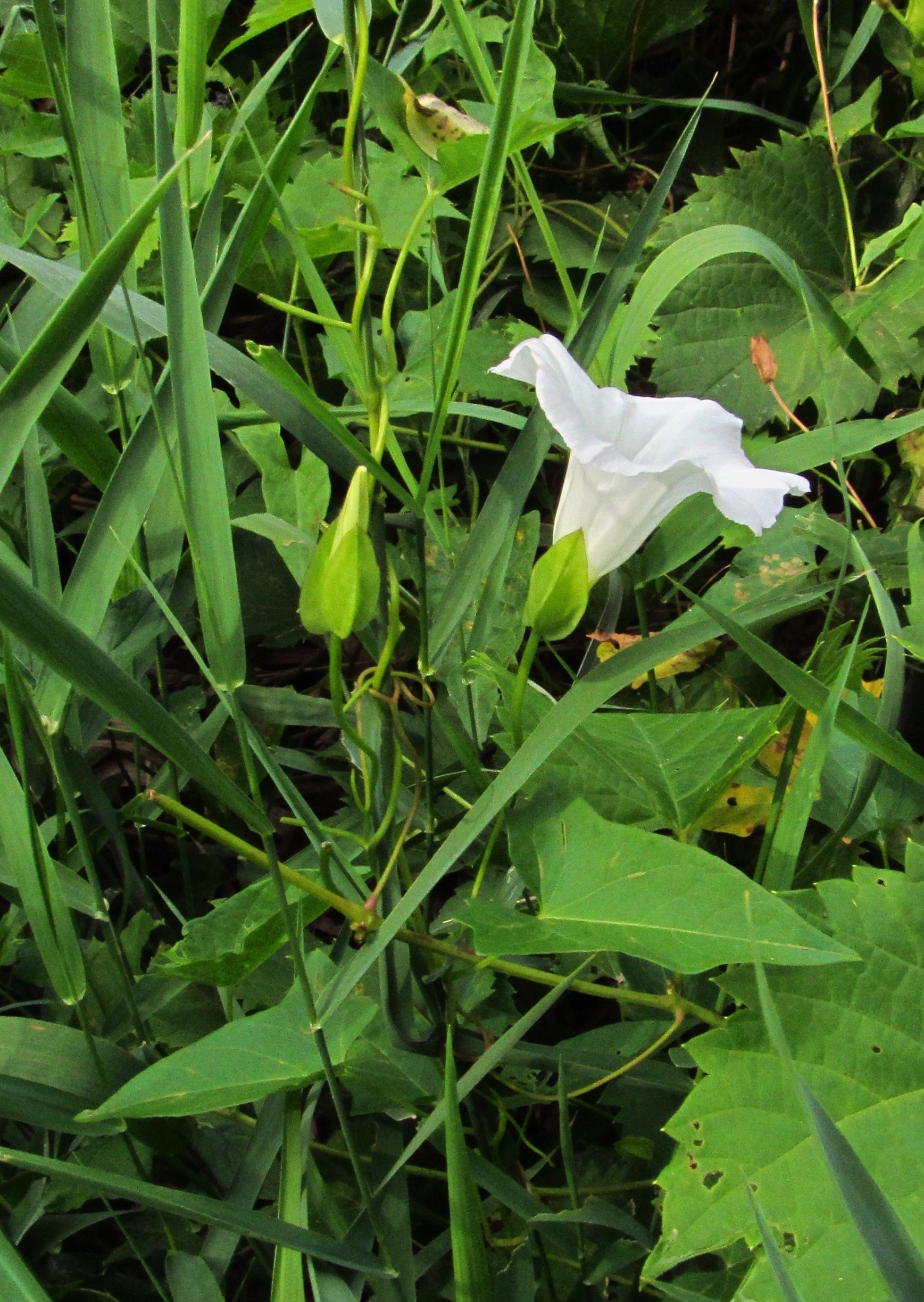 Hedge bindweed growing near the bank of Walnut Creek: 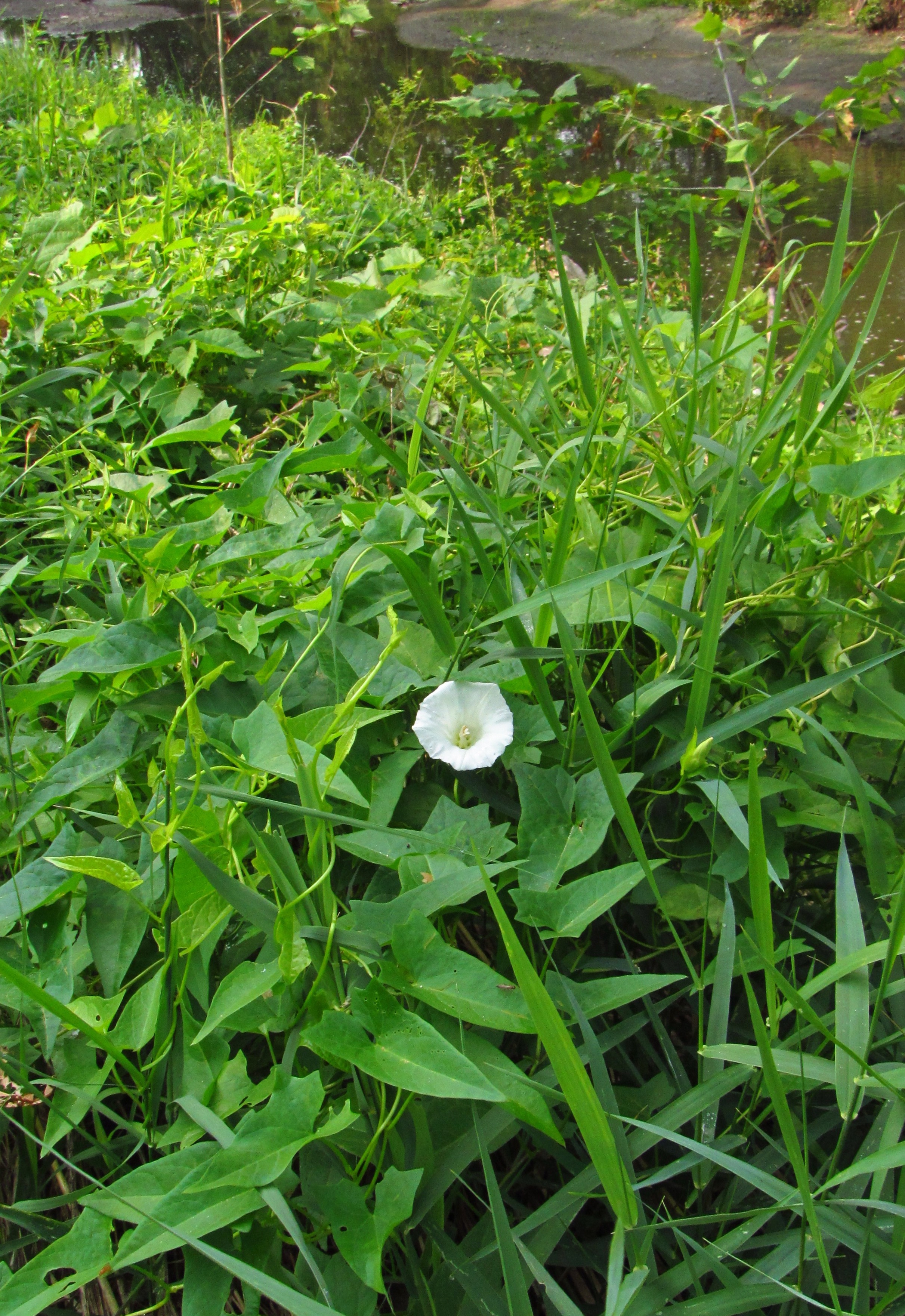 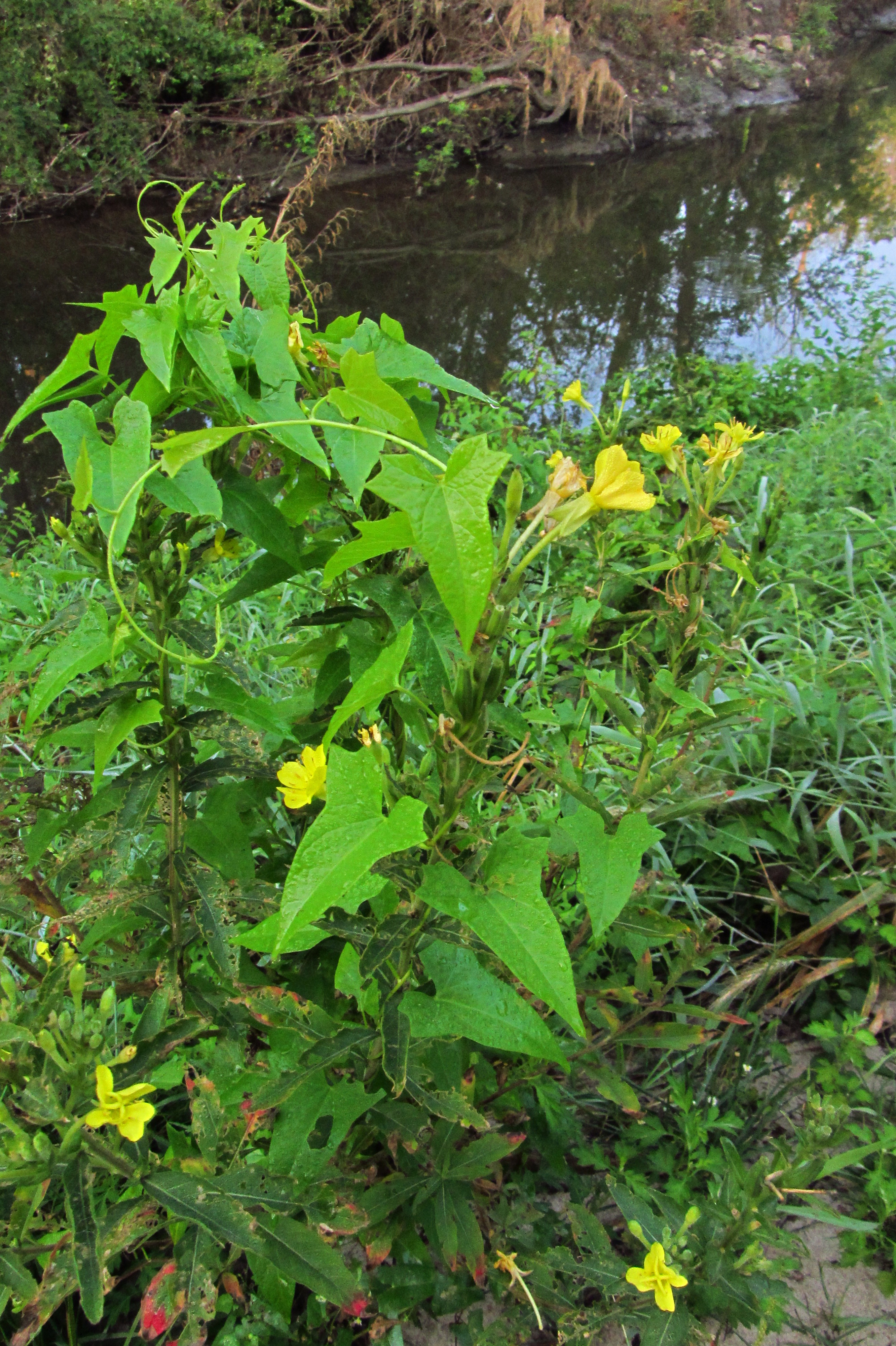 The yellow flowers here are wingstem. 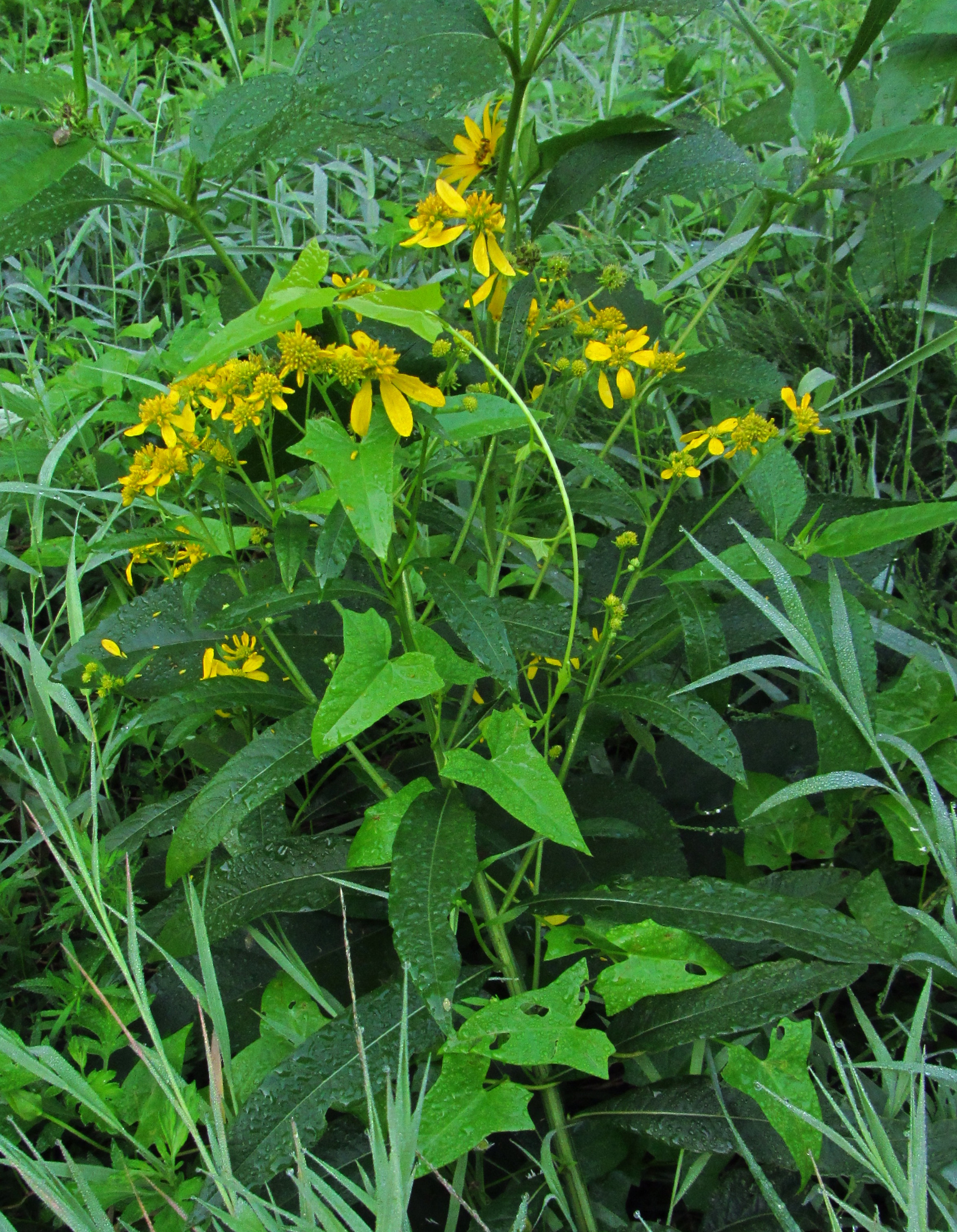