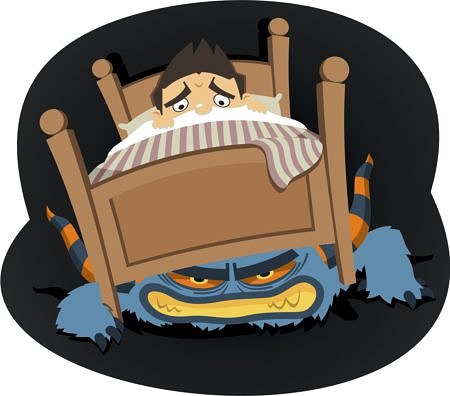 Vacuum up the monsters

There are monsters under the bed. And they are coming for us.

This is the agenda that the right has been pushing on Americans for the last 30 or so years. And it is working for the same reason my twins, when they were toddlers, were afraid that monsters lurked under their beds.

Psychologists tell us that in addition to the fears we feel because we sense that there is real danger, such as a fire, much of our fears emanate from what we don't know or what we are taught not to know. Once, sailors were terrified because they had been told, by experts, that the world was flat, with monsters at the edge, ready to swallow us up if we got too close.

Today, we are being told that monsters are everywhere:

*They don't look like us and they speak strange languages, all the better when planning to do something horrible to white people.

*They are women, waiting to gleefully ensnare our sons and husbands in willfully false allegations, with the intent of bankrupting them and ruining their reputations for all time.

*They are homosexuals and lesbians, leering at our children, with an agenda of luring them into a lifestyle of moral depravity.

*There are Arabic-speakers, who want nothing more than to take God away from us.

*And of course, there are liberals, who continue to look the other way whilst all this is going on.

Monsters under our beds.

When my twins were toddlers, I had a choice to make: Deny that the monsters existed and tell Josh and Julia to forget about them and go to sleep, or admit that they were real and do something about them.

Progressives have largely taken the first course. We pooh-pooh Americans' fears -- the fear of financial insecurity, of job loss, of wholesale family structure upheaval, of the rest of the world catching up to us -- while we attack those who harbor those fears merely as ignorant, xenophobic, bigoted and so on. But attempting to deal with the monsters in that way only reinforces the doubt, insecurity and mistrust of those who believe in them.

To change our country, we must deal with Americans' monsters the same way I dealt with my kids' monsters. I looked under the bed and announced that I had found a few. Once I had established that I believed them, I commenced to eradicate them ... with a handheld vacuum cleaner I used under their beds. I did this every night until the twins told me that the monsters weren't there anymore: They knew I'd be coming for them each night and they stayed away.

Puerile? Infantile? Perhaps. But it's a lesson for how we need to approach today's phobias.

We need to understand people's fears, and assure them that we believe. Establish trust. Then, we can work to eliminate those fears. When Americans realize that the monsters can no longer harm us, the fear will be gone. Maybe even for good.