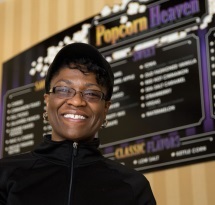 We need representatives who vote for us!

ReShonda Young of Waterloo has been an advocate for small business owners on a variety of issues. -promoted by desmoinesdem

My U.S. House Representative Rod Blum, along with his Iowa colleagues David Young and Steve King, has repeatedly voted to take away health care from me, my brother, my employees, and many other Iowans.

This is personal for me, as it is for most of us. I have a serious health condition and, as a business owner, have employed people with serious conditions of their own.

Blum was one of the small majority of U.S. House members who supported repeal of the Affordable Care Act, including rolling back protections for people with pre-existing conditions.

Now he swears he stands up for people with pre-existing conditions. He wants us to forget his voting record.

I can’t forget. Too much is at stake.

One year ago I was diagnosed with blood clots in my legs, a serious condition I manage through regular check-ups and good health insurance. I don’t want to return to the days when insurance companies could discriminate against people who need health care the most.

I’m thinking not just about myself. Before the Affordable Care Act passed, I couldn’t get health coverage for my employees. We were priced out of the market because of our health conditions.

One employee had a condition that required his esophagus to be stretched regularly. Another was my brother, who worked for our company and suffers from high blood pressure. Insurance corporations didn’t want to touch us.

Those are just some of the guarantees Iowa Republican Representatives voted to take away when they cast votes for health care repeal.

Now Blum is trying to cover his tracks. His spokesman swears Blum didn’t vote to let insurance corporations flat-out reject us for a pre-existing condition. But he voted to let insurers do just about everything else.

He voted to let insurers put annual and lifetime dollar limits on our care -- as if needs stop when a corporation says you’ve cost them enough. And he voted to gut Medicaid, which covers nursing home care for so many of our parents and grandparents.

Those weren’t votes for us.

Fortunately, ordinary people stopped the bill that Blum supported before it could become law. But his supporters are hoping this election turns out in their favor, and Republican leaders are already talking about cutting the ACA, Medicare, and Social Security.

That’s why -- as a businessperson and an Iowan – I’m looking at my congressman’s record and voting accordingly. I encourage others to do the same.

We need elected officials whose votes show that they’re really on our side.

ReShonda Young has been an advocate for small-business owners on a variety of issues, including those seeking to provide health insurance for their employees. In 2009 Young testified in front of the House Education and Labor Committee, supporting a draft proposal for health care reform. She is the owner of Popcorn Heaven, based in Waterloo, and a leader in the Main Street Alliance of Iowa.