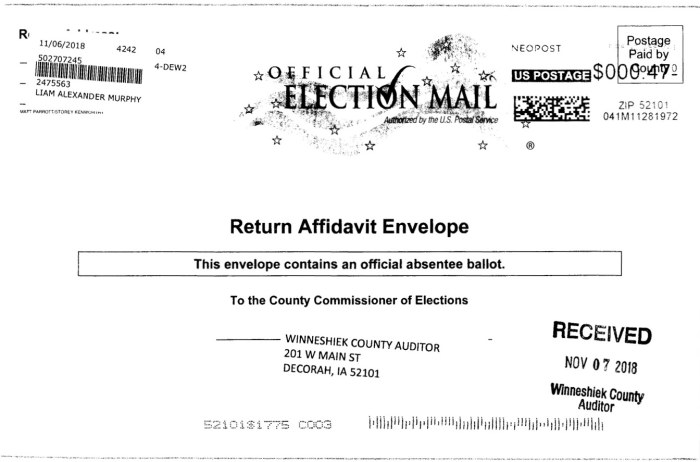 Bev Clark calls for action to prevent a 2020 repeat of the scenario that played out in Iowa House district 55. -promoted by Laura Belin

The Iowa legislature must clarify the law that determines the timeliness of absentee ballots. Some 41 percent of Iowans who participated in the 2018 election voted early, according to the Secretary of State’s certified results. That's 547,205 ballots!

Those are the known, counted absentee ballots. Some of them may not have complied with the postmark requirement, but were counted anyway. In the very tight election for Iowa House district 55, where only nine votes separated the candidates, Winneshiek County rejected 29 late-arriving absentee ballots without a postmark. But those ballots did have an intelligent mail barcode, proving they entered the postal service before election day. The dispute centered on what kind of mail barcode.

Iowa law requires that absentee ballots bear a postal mark or an intelligent mail barcode. The Administrative Rules Code requires a postmark or “Intelligent Mail barcode, “IMb” on absentee ballots. The preamble to the rule indicates the intent to allow county commissioners of elections to utilize the United States Postal Service’s Intelligent Mail barcode (“IMb”) to determine timeliness, as an alternative to the postmark. “IMb” refers to a unique county barcode program set up to pre-print a unique “IMb” on the return ballot for each voter. This return ballot can then be traced to its entry in the mail system, allowing determinations of timeliness.

Only six counties in Iowa voluntarily participate in this system. It costs more in printing and personnel time to set up. Winneshiek County did not participate in 2018. The dispute centered on whether the postmark was the only allowable indicator of timeliness. On the contested ballots, the postmark was missing. All that was available on the envelopes was an “imb” postal mail code, not an “IMb” county specific mail code, to answer the question of timeliness.

It took a court order to answer this question. The “imb” on each of the contested ballots was read at the post office; 29 of 33 ballots were, in fact, timely mailed. The court then said the legislature was the proper place to decide the contested election. The rules provide that the ballots could be opened and counted. But the Republican-controlled Iowa House voted along party lines not to open or count the ballots, thus keeping in place the Republican legislator who may or may not have been the legitimate winner of that election.

So, we have a “voluntary” barcode tracing process, “IMb,” enabled but not defined by rule making, used only in six counties in Iowa, to pre-print an “IMb” on the return envelopes. We also have a postal system that no longer postmarks all the mail, but does mark envelopes with an “imb” after the return envelope is deposited in the mail. This “imb” was contested as not being a legitimate way to determine timeliness.

Voters in the other 93 Iowa counties now have uncertainty. Their absentee ballots may or may not arrive with markings that show timeliness. In House District 55, absentee ballots without postmarks were counted in Fayette County but not in Winneshiek. Yet those 29 uncounted ballots might well have changed the outcome of the election, which Michael Bergan won by nine votes.

Unless the legislature cleans up the discrepancies in the interpretation and application of the rules and the law surrounding absentee balloting, this scenario could be repeated in the next election. So, does the Republican-dominated legislature want to fix this problem, or will this simply be another way to suppress voting, assuming more Democrats continue to vote by absentee ballot?

Those 29 uncounted absentee ballots remain on my mind. I listened intently to the interviews of some of these voters and the statements made by various legislators in the Iowa House floor debate. A number of these voters had health issues impacting their decision to vote by mail, rather than at the polls. It really bothers me that these voters, who thought they had done everything right, in the face of their own personal difficulties, are instead disenfranchised. Why? Over the definition of “intelligent mail barcode!” Is it “IMb” or “imb” or both?

I reflected on the absentee ballot voters I encountered as a volunteer in this past election. While canvassing in an unfamiliar neighborhood, I knocked at an open door to ask where the address I was seeking could be found. A lady’s voice welcomed me in. I soon saw that she was in a cast. I explained what I was doing as a volunteer and she told me she needed an absentee ballot herself as she had fallen, breaking her leg, soon after having surgery. It was pure happenstance that I met her and was able to help her get a ballot.

Another absentee ballot voter lived in very austere conditions, rarely venturing out due to being totally dependent on others for transportation. Many absentee ballot voters are elderly, finding getting to the polls very difficult. Often they have to wait for family members or others to help them get their ballots back in the mail.

A family I met lived a considerable distance from the polling place so all eligible voters requested absentee ballots when I knocked on their door.

The huge construction project on Highway 330 this past summer caused many people in the countryside west of the highway to be essentially cut off from their polling place. It took some driving gymnastics to get from one point to another. In addition, with the heavy rains, many of the gravel roads were very difficult to travel. In some places, a bridge was out or nearly impassable. People unfamiliar with country driving found themselves in a mess on B and C roads.

People decide to vote by absentee ballot for various reasons. Many mailed their ballots before the election, trusting that they would arrive at the election commissioner’s office in the courthouse and be counted. According some legislators who spoke during the Iowa House hearings, more than a thousand ballots around the state were rejected due to missing a required “postmark” or “IMb” (barcode.) No one knows how many of those ballots were timely mailed. Only the disputed Winneshiek ballots were brought before the House election contest committee.

Will we continue to allow only those absentee ballots that have either a postmark or an assigned barcode “IMb” pre printed on the ballot return envelope, remembering that only six counties opt into this system? What are we going to do about all of the other Iowa counties if their ballots come in without a postmark but with an “imb” put on by the post office? The old-fashioned postal stamp could be replaced entirely by an intelligent mail barcode, “imb.” Will a court order be required each time to count ballots in envelope with only an “imb?”

Surely we can do better than a system where a vote being counted depends on where someone lives.

Our legislators owe Iowans a process that is clear and can be trusted to result in timely ballots being counted, without resort to the courts. Every county should be required to follow the same procedures. We should either be all in or all out on requiring “IMb” tracing on absentee ballots.

The guiding value to ensure that voters' voices are heard should compel our legislators to act this session to establish consistent absentee ballot voting procedures. 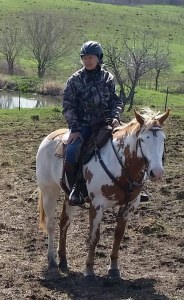 Top image: Envelope containing Liam Murphy's uncounted ballot. The photograph was part of an exhibit for Kayla Koether's lawsuit seeking to force the disputed ballots to be counted. Murphy also provided an affidavit for that case.