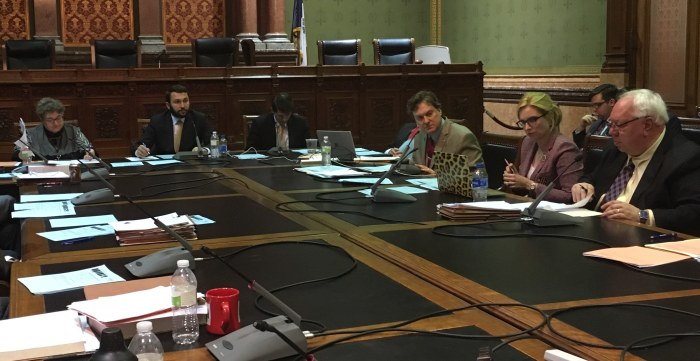 The controversial 2018 election result in Iowa House district 55 has inspired two legislative proposals related to late-arriving absentee ballots. The House State Government Committee on March 5 advanced a bill designed to enfranchise more Iowans who voted by mail, with uniform rules for all 99 counties.

The leader of the Iowa Senate State Government Committee would move in the opposite direction, excluding all ballots that arrive after election day, even if envelope markings could prove voters mailed them on time. That approach appears to be a non-starter for House Republicans.

In November, the Winneshiek County auditor excluded 33 ballots that arrived after election day with no postmark. The U.S. Postal Service later determined that voters mailed 29 of those ballots on time, but House Republicans refused to count them, because the envelopes did not have a specific kind of barcode ordered by county auditors.

Hundreds of late-arriving absentee ballots with no postmark have gone uncounted in every recent Iowa general election (one reason I encourage early voting in person). The problem gained more salience this year because the two candidates for House district 55 were separated by only nine votes, according to official results. The 29 rejected absentee ballots could have changed the outcome.

Republican State Representative Steve Holt, who chaired the special committee that considered the House district 55 election contest, introduced House File 608 on March 4. The bill would replace current Iowa Code language on "intelligent mail barcodes." Instead, absentee ballots that arrive at the county auditor's office after election day but before noon on the Monday following the election could be counted if the envelopes were postmarked or bore a "postal service barcode traceable to a date of entry into the federal mail system not later than the day before the election."

A subcommittee considered the bill the following day, due to the coming "funnel" deadline. Non-appropriations bills need to clear at least one House or Senate committee by March 8 in order to stay alive during the 2019 session.

The initial draft of HF 608 did not require county auditors to order the "postal service barcodes" before the election; in 2018, only six county auditors ordered "intelligent mail barcodes." But on March 5, subcommittee chair Jon Jacobsen and Democratic Representative Bruce Hunter agreed to support an amendment to make the use of such barcodes mandatory in all counties. Jacobsen highlighted the importance of having uniform rules on which ballots can be counted, citing the U.S. Supreme Court's 2000 decision in Bush v Gore.

After the subcommittee meeting, Jacobsen told Bleeding Heartland, "If for whatever reason someone uses a barcode that's not purchased, those [ballots] will all go to a tribunal committee." They will be counted if it can be independently verified that the voters mailed the ballots on time.

Worth noting: HF 608 would particularly benefit voters in rural Iowa. Because letters mailed in smaller counties are typically routed through a processing center in a larger city, absentee ballots tend to take longer to reach a county auditor's office and are in more danger of arriving after election day.

While House members looked for ways to enfranchise more voters, Republican State Senator Roby Smith's answer to the House district 55 travesty is to reject thousands more ballots every election. The State Government Committee chair introduced Senate Study Bill 1241 on March 5. Among that wide-ranging election bill's many bad provisions: new code language would invalidate all absentee ballots county auditors receive after the polls close on election day, regardless of any postmark or barcode on the envelope.

After the House State Government subcommittee meeting, I asked Jacobsen whether the House GOP caucus might support Smith's proposal. "The House is closest to the people," he said. "Ours is the best bill, absolutely. We think it's more comprehensive and is the most comprehensive in its enfranchisement of all voters."

The full House State Government Committee met on the evening of March 5 to consider seven bills, including HF 608. Jacobsen briefly explained the concept, and Hunter thanked Republican colleagues for their work on the bill and its amendment. All 22 committee members voted to approve the bill, which will be eligible for House floor debate within a few days.

I sought comment a few minutes later from State Representative Bobby Kaufmann, who chairs the State Government Committee. He didn't want to speak directly about Smith's bill, which he hadn't read. But he affirmed, "This is the direction the House has chosen to take," with bipartisan support for allowing more votes to be counted. "This is how we intend to move forward."

A Senate subcommittee will consider SSB 1241 on March 6.

The House bill on late-arriving absentee ballots was renamed House File 692 and passed unanimously on March 14.