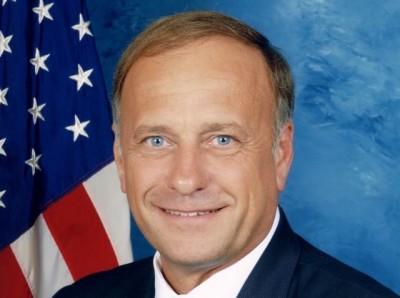 Representative Steve King (IA-04) was the only member of the U.S. House to vote "present" on March 7, as the chamber passed a broad resolution condemning various forms of bigotry. Every Democrat, including Iowa Representatives Abby Finkenauer (IA-01), Dave Loebsack (IA-02), and Cindy Axne (IA-03) supported the measure, along with 173 Republicans (roll call). Another 23 Republicans voted no.

Originally envisioned as a statement against anti-Semitism after first-term Democratic Representative Ilhan Omar suggested that supporters of Israel have dual loyalty to a foreign power, the resolution grew into a lengthy denunciation of intolerance toward minority or marginalized groups. Scroll down to read the full text, which includes specific examples of smears and ends by encouraging

all public officials to confront the reality of anti-Semitism, Islamophobia, racism, and other forms of bigotry, as well as historical struggles against them, to ensure that the United States will live up to the transcendent principles of tolerance, religious freedom, and equal protection as embodied in the Declaration of Independence and the first and 14th amendments to the Constitution.

King's office did not release a statement explaining his "present" vote, nor did he discuss it on his social media feeds. On March 6, he published a memo purporting to fact-check the New York Times article from January that quoted him about white nationalism. The furor surrounding that interview led House Republican leaders to strip King of his committee assignments.

Meanwhile, Andy Campbell of the Huffington Post reported on March 6 that white supremacists involved with a group called Identity Evropa "have actively worked to keep King and his racist ideology in office — by donating to his campaign, calling members of Congress to show their support when King stumbles or by attempting to reach the congressman directly."

UPDATE: The Sioux City Journal quoted King's communications staffer John Kennedy as saying, “Congressman King voted Present because he isn’t going to validate a rigged game which punishes Republicans for things they don’t say, while moving heaven and earth to provide cover to Democrats for the things they did say."

Whereas adherence to these principles is vital to the progress of the American people and the diverse communities and religious groups of the United States;

Whereas whether from the political right, center, or left, bigotry, discrimination, oppression, racism, and imputations of dual loyalty threaten American democracy and have no place in American political discourse;

Whereas White supremacists in the United States have exploited and continue to exploit bigotry and weaponize hate for political gain, targeting traditionally persecuted peoples, including African Americans, Native Americans, and other people of color, Jews, Muslims, Hindus, Sikhs, immigrants, and others with verbal attacks, incitement, and violence;

Whereas the Reverend Martin Luther King, Jr., taught that persecution of any American is an assault on the rights and freedoms of all Americans;

Whereas on August 11 and 12, 2017, self-identified neo-Confederates, White nationalists, neo-Nazis, and Ku Klux Klansmen held White supremacist events in Charlottesville, Virginia, where they marched on a synagogue under the Nazi swastika, engaged in racist and anti-Semitic demonstrations and committed brutal and deadly violence against peaceful Americans;

Whereas a White nationalist murdered nine African-American worshipers at the Emanuel African Methodist Episcopal Church in Charleston, South Carolina, on the evening of June 17, 2015, in the hopes of igniting a nationwide race war;

Whereas, on October 27, 2018, the perpetrator of the deadliest attack on Jewish people in the history of the United States killed 11 worshippers at the Tree of Life Synagogue building in Pittsburgh and reportedly stated that he “wanted all Jews to die”;

Whereas anti-Semitism is the centuries-old bigotry and form of racism faced by Jewish people simply because they are Jews;

Whereas there is an urgent need to ensure the safety and security of Jewish communities, including synagogues, schools, cemeteries, and other institutions;

Whereas Jews are the targets of anti-Semitic violence at even higher rates in many other countries than they are in the United States;

Whereas it is a foreign policy priority of the United States to monitor and combat anti-Semitism abroad;

Whereas anti-Semitism includes blaming Jews as Jews when things go wrong; calling for, aiding, or justifying the killing or harming of Jews in the name of a radical ideology or extremist view of religion; or making mendacious, dehumanizing, demonizing, or stereotyped allegations about Jews;

Whereas Jewish people are subject in the media and political campaigns to numerous other dangerous anti-Semitic myths as well, including that Jews control the United States Government or seek global, political, and financial domination and that Jews are obsessed with money;

Whereas scapegoating and targeting of Jews in the United States have persisted for many years, including by the Ku Klux Klan, the America First Committee, and by modern neo-Nazis;

Whereas accusing Jews of being more loyal to Israel or to the Jewish community than to the United States constitutes anti-Semitism because it suggests that Jewish citizens cannot be patriotic Americans and trusted neighbors, when Jews have loyally served our Nation every day since its founding, whether in public or community life or military service;

Whereas accusations of dual loyalty generally have an insidious and pernicious history, including—

(1) the discriminatory incarceration of Americans of Japanese descent during World War II on their basis of race and alleged dual loyalty;

(2) the Dreyfus affair, when Alfred Dreyfus, a Jewish French artillery captain, was falsely convicted of passing secrets to Germany based on his Jewish background;

(3) when the loyalty of President John F. Kennedy was questioned because of his Catholic faith; and

(4) the post-9/11 conditions faced by Muslim-Americans in the United States, including Islamophobia and false and vicious attacks on and threats to Muslim-Americans for alleged association with terrorism;

Whereas anti-Muslim bigotry entails prejudicial attitudes towards Muslims and people who are perceived to be Muslim, including the irrational belief that Muslims are inherently violent, disloyal, and foreign;

Whereas Muslims and people perceived to be Muslim are subjected to false and dangerous stereotypes and myths including unfair allegations that they sympathize with individuals who engage in violence or terror or support the oppression of women, Jews, and other vulnerable communities;

Whereas in 2017, mosques were bombed in Bloomington, Minnesota, and burned in Austin, Texas, Victoria, Texas, Bellevue, Washington, and Thonotosassa, Florida, and mass attacks on Muslim communities were planned against communities in Islamberg, New York, in 2019, Jacksonville, Florida, in 2017, and Garden City, Kansas, in 2016;

Whereas the Federal Bureau of Investigation reported that hate crimes against Muslims or Muslim institutions in the United States increased by over 99 percent between 2014 and 2016;

Whereas attacks motivated by bigotry against those who are Muslim or perceived to be Muslim have substantially increased since the September 11, 2001 terrorist attacks;

Whereas the violation of an individual’s civil rights based on his or her actual or perceived membership in a particular religious group clearly violates the Constitution and laws of the United States; and

Resolved, That the House of Representatives—

(1) rejects the perpetuation of anti-Semitic stereotypes in the United States and around the world, including the pernicious myth of dual loyalty and foreign allegiance, especially in the context of support for the United States-Israel alliance;

(2) condemns anti-Semitic acts and statements as hateful expressions of intolerance that are contradictory to the values that define the people of the United States;

(3) reaffirms its support for the mandate of the United States Special Envoy to Monitor and Combat Anti-Semitism as part of the broader policy priority of fostering international religious freedom and protecting human rights all over the world;

(4) rejects attempts to justify hatred or violent attacks as an acceptable expression of disapproval or frustration over political events in the Middle East or elsewhere;

(5) acknowledges the harm suffered by Muslims and others from the harassment, discrimination, and violence that result from anti-Muslim bigotry;

(6) condemns anti-Muslim discrimination and bigotry against all minorities as contrary to the values of the United States;

(7) condemns the death threats received by Jewish and Muslim Members of Congress, including in recent weeks;

(8) encourages law enforcement and government officials to avoid conduct that raises the specter of unconstitutional profiling against anyone because of their race, religion, nationality, political, or particular social group, including the assignment of blame or targeting members of an entire religious group for increased suspicion, based on the conduct of a single individual or small group of individuals; and

(9) encourages all public officials to confront the reality of anti-Semitism, Islamophobia, racism, and other forms of bigotry, as well as historical struggles against them, to ensure that the United States will live up to the transcendent principles of tolerance, religious freedom, and equal protection as embodied in the Declaration of Independence and the first and 14th amendments to the Constitution.