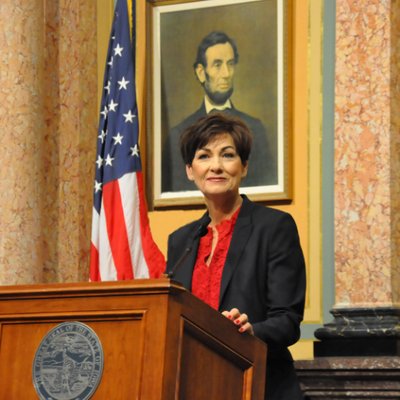 When a government press release arrives at 4:45 pm on a Friday, you know it's not bearing good news. UnitedHealthcare will soon pull out of Iowa's Medicaid program, the governor's office announced on March 29. The company "manages health care for more than two-thirds of Iowans on Medicaid," at least 425,000 people, Tony Leys reported for the Des Moines Register.

The official spin portrayed Governor Kim Reynolds as a hero who resisted a for-profit insurer's "unreasonable" and "unacceptable" demands.

WHO PULLED THE PLUG?

The governor's news release cast Reynolds as the change agent.

“Today I ended negotiations between the State of Iowa and UnitedHealthcare because of terms that I believed to be unreasonable and unsustainable.

"From the day I was sworn in as Governor I have been committed to ensuring a sustainable managed care program that protects patients, supports providers, and holds the insurance companies accountable.

"We have continued to work in good faith, along with the legislature to make improvements to the managed care system, including a substantial increase to funding this past year.

"Unfortunately, UnitedHealthcare continued to make additional demands that I found to be unacceptable, including a provision that would remove pay for performance measures that would hold them accountable.

"I want to assure Iowans that the state will work closely with UnitedHealthcare over the next several months to minimize disruption and ensure a smooth transition to the two other managed care companies.”

But one page on an agency website indicates the insurance company pulled the plug the day before the governor "ended" contract talks: "On March 28, 2019, The Department of Human Services (DHS) received notice from UnitedHealthcare that they would be leaving the IA Health Link program in the next several months." 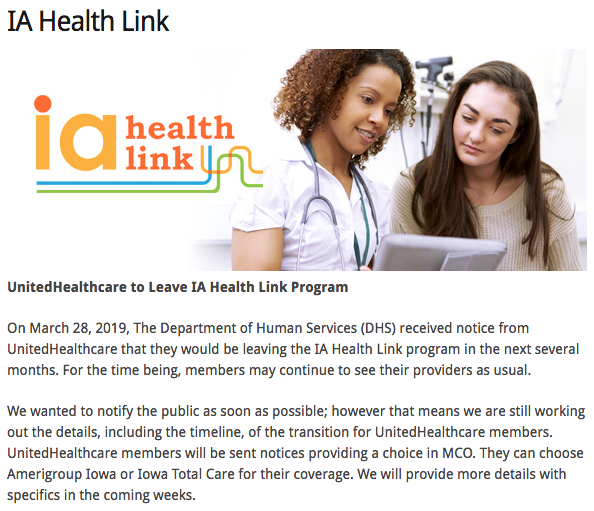 A subsequent agency news release confirmed that the company decided to leave, but dated that news to Friday (not Thursday): "Today, March 29, 2019, the Department of Human Services (DHS) received notice from UnitedHealthcare that they would be leaving the IA Health Link program in the next several months."

UPDATE: On April 1, the DHS edited this page, dating the communication from UnitedHealthcare to March 29. The department's top communications staffer Matt Highland characterized the previous version as a "typo" but has not yet sent Bleeding Heartland a copy of the notice in question. SECOND UPDATE: UnitedHealthcare confirmed the company gave notice on March 29 but has not provided a copy or clarified when the document reached DHS. I am trying to ascertain whether the company walked away from the table or the governor cut off the contract talks. At the end of this post I have enclosed a statement UnitedHealthcare released on March 31.

THE "RIGHT THING TO DO"?

Immediately after the Friday news dump, DHS Director Jerry Foxhoven pushed the line that UnitedHealthcare's departure shows the process is working. From the department's press release:

“Ensuring that our members receive the best care, and that our program is sustainable for the long-term, is our highest priority. The Governor and I have both been firm that our MCOs need to be held accountable and I applaud her for her support in that effort. This is the right thing to do for our members and for taxpayers,” said Director Foxhoven.

From Michaela Ramm's story for the Cedar Rapids Gazette:

“That’s the issue here,” said Human Services Director Jerry Foxhoven in a Friday interview with The Gazette. “UnitedHealthcare did not want to be held to the performance standards the contract holds them to, and we’re just not willing to budge off that.”

The state had imposed certain performance measures in contracts with the Medicaid insurers earlier this year, such as paying health care providers on time and reducing use of emergency room services among members. If the organizations failed to meet the standards, the state would withhold payment from them.

“We were very clear they signed a contract that required those performance standards to be met, they hadn’t met them, they’re not entitled to the money and we’re not willing to waive that,” he said.

Foxhoven contended the fact the state refused to meet those demands, "shows that the system works. ... The fact that we're able to say, 'If you don't want to be accountable, this isn't the right state for you,' means it's a success. Being afraid to do that means you're giving up the integrity of the program."

What integrity? Thousands of Iowans have faced cuts affecting medications or home health care or transportation services they'd relied on for years.

Meanwhile, many health care providers have laid off staff and some have shut their doors because of chronically late payments from the MCOs, or failure to reimburse for the full value of services to patients. As Democratic State Senator Liz Mathis explained during floor debate on a Medicaid-related bill earlier this month,

Yes, language exists in current contracts about payment, but it's not happening. Ask some of the providers, who were at one time owed 3 million and 4 million dollars. Non-profit agencies that were owed that, took lines of credit and another line of credit. Several closed down programs [....]

So yes, in your contract, it says, yes, they're supposed to pay. But they don't come to a resolution, and it's the managed-care organizations' resolution, right? It's their resolution, it's what they decide, because there's no appeal procedure.

Mathis and fellow Democratic Senator Amanda Ragan proposed legislation this year (both as part of a Medicaid omnibus and as a stand-alone measure) to allow a third party to review disputed payment claims. Republicans in control of the Iowa Senate didn't even give those bills a subcommittee hearing. They later voted down an amendment that would have held the MCOs accountable.

Timely payment was not a significant problem when Medicaid was a state-run program. Administrative expenses were lower as well, which is one reason per-member costs have "climbed nearly three times as fast since the state hired private companies to manage the program, when compared to the previous six years."

UnitedHealthcare's caseload in Iowa nearly doubled after a different company pulled out in late 2017. Now two other MCOs currently serving fewer than 200,000 people are supposed to take on some 425,000 additional recipients in a matter of months.

Instead of patting herself on the back and promising that DHS will work "to minimize disruption and ensure a smooth transition to the two other managed care companies," Reynolds should use the powers of her office to bring Medicaid back under state control as soon as possible. Privatization has failed on every level.

P.S.- Commenting on Leys' report, Ditchwalk noted that the governor and DHS director "have been cutting secret, friendly deals with these privateers for years." He speculated that talks with UnitedHealthcare broke down because "now there is a new state auditor looking on." Thoroughly investigating how MCOs have used Medicaid funds was a key campaign promise for Democratic State Auditor Rob Sand.

Below outlines the primary reasons we determined we could no longer participate in the IA Health Link program, which are also summarized in our Notice of Intent to Exit the program sent to the Director of the Iowa Department of Human Services on March 29, 2019.