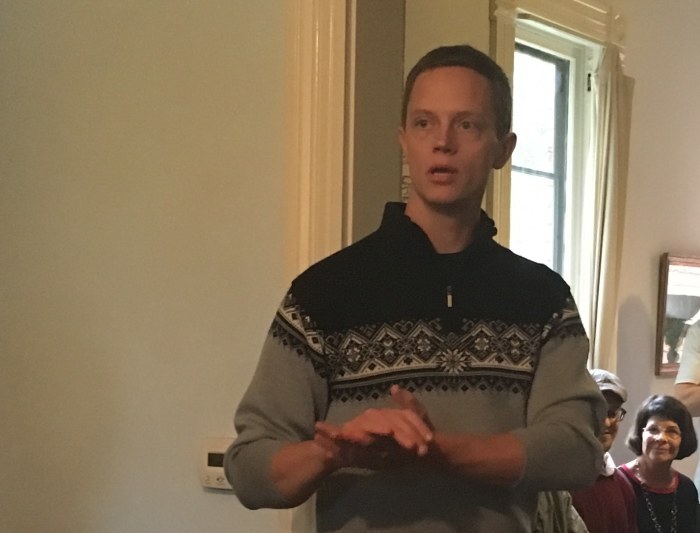 Rob Sand: If I'm elected, Medicaid MCOs will get subpoenas

Iowa’s disastrous Medicaid privatization is becoming an important theme of Rob Sand’s campaign for state auditor. While Republican incumbent Mary Mosiman was slow to embark on a review of the program and won’t promise to release her office’s findings before the November election, Sand has pledged to thoroughly investigate the operations of managed-care organizations (MCOs), which now make health care decisions affecting more than 600,000 Iowans.

A growing number of Iowans are realizing it was a mistake for former Governor Terry Branstad to put private insurance companies in charge of Medicaid. The latest statewide poll by Selzer & Co for the Des Moines Register and Mediacom found that just 28 percent of respondents think private companies should continue to manage Medicaid, while 48 percent want to “revert to a state-administered program.” The last time Selzer asked that question a little more than a year ago, 37 percent supported continuing the privatization policy, while 47 percent preferred a return to state control.

Like her predecessor, Governor Kim Reynolds has repeatedly claimed her policy would make Medicaid more efficient and save taxpayer dollars. State officials have never been able to explain how much money (if any) the state saved, however. The Reynolds administration agreed to give the MCOs 7.5 percent more state funding during the current fiscal year.

Patients and their advocates say any savings have been achieved by covering fewer services for Medicaid recipients, or by failing to reimburse health care providers. In June, Mosiman accepted Democratic State Senator Pam Jochum’s request for the State Auditor’s office to determine whether the state has saved money by privatizing Medicaid, and if so, where the savings came from.

The matter came up during a joint appearance by Mosiman and Sand on Iowa Public Television’s “Iowa Press” program on September 28 (video and transcript). Noting that Medicaid privatization has become a major issue in the governor’s race, Brianne Pfannenstiel of the Des Moines Register asked Mosiman whether her office would release findings from its review of the Medicaid program before the election. The auditor’s answer was baffling.

For those of you that have worked with me in the past, I can’t answer specifics about a work in process. We did recognize after there was different information out there that we needed to provide some financial clarity. An audit does typically not audit the savings, but because there was confusion about the savings, we wanted to address this issue. So ideally, the method of determining how the savings would be that would be the would be guessed, will be gauged, would be worked into the implementation of the privatization process or into the law. And it wasn’t in this case and we did comment on that, um, as this privatization first took place. But that being said, now that we’ve had a couple of years of this process, there are some numbers for us to work with. We are seeing the same information that has been publicly reported in the media. And when we get done with our work, it will be a report that is complete, that will be comprehensive, and that will be verifiable because that’s the key information that is needed from finances that people can trust the information. But will it be released before the election date? I can’t answer that, because we have never let the political process dictate our work product. We are doing this in addition to our statutory work, as well as our ongoing investigations. But we do have this as a priority.

More than one-fifth of Iowans are on Medicaid. Mosiman ordered this review months ago. Her staff should be able to finish the analysis before voters choose a governor and state lawmakers who will influence future policy.

When it was his turn to speak, Sand said the auditor’s office is “supposed to be a watchdog for Iowa taxpayers” and should “be sniffing around” whenever there is a major change in a program affecting Iowans. He added,

We’re in a state of upheaval with this issue. And to me, while I agree that the audit or the examination shouldn’t be political, it ought to acknowledge the fact that people are going to be walking into their, uh, voting booths in a couple of weeks here with a really important decision to make. And I think they deserve to have clarity and transparency in making that decision. It doesn’t mean that that determines what the result is. It should be a dig down into finding out what the truth is. And Iowans ought to know what the truth is.

Yepsen: But you know how this looks. You’re a Republican. This is a controversy that’s got the governor, uh, behind the eight ball. It looks, it looks to a lot of people like you’re slow walking this thing in order to keep her from taking a bad hit on election day. What do you, how would you say to that?

Mosiman: I will say without any qualms whatsoever, we do not work for the governor. We do not work for the General Assembly. We are an autonomous office. We work for the people of Iowa. This is an important issue. You should want the information to be complete. You should want it to be comprehensive. You should want it to be verifiable. That takes time, and you can’t push the auditor’s office based on or you can’t push a financial information office on behalf of a political calendar. I understand the priority and I understand the election calendar. It will be issued. I just can’t give you an exact date, or I would be also behaving politically in an office because I would be dropping the statutory duties and the other ongoing investigations. Everything we do in the auditor’s office is important. There’s dead, their statutory deadlines. There’s sometimes other outlying factors. But we do understand the importance of getting this information to the people of Iowa.

In two speeches on September 29, Sand blasted Mosiman for not using the powers at her disposal to find out what has been going on with Medicaid since the program shifted to managed care in April 2016. Here’s the audio from Sand’s remarks at a morning fundraiser in Des Moines, hosted by Ed Fallon and Kathy Byrnes. He delivered a shorter version of the same message at the Polk County Democrats Steak Fry later in the day.

Sand’s comments about Medicaid began around the 6:30 mark of this clip.

First, he told the “heartbreaking” story of a quadriplegic man who had been living at home for many years, but was forced to move into a care facility after his MCO refused to cover essential in-home services. Three months later, he died. Jason Clayworth was first to report on the inexcusable treatment of Todd Mouw in the Des Moines Register last August. His experience was not an isolated case. Private insurers have cut in-home services for thousands of Iowans with disabilities. One quadriplegic man who was also forced to move out of his home recently appeared in a television commercial and online video for Fred Hubbell, the Democratic candidate for governor.

“There are literally people dying because of the privatization of Medicaid,” Sand said. “And our governor still thinks, ‘Well, we’ve made a couple of mistakes, but we’re moving forward with this.'” He went on (around 8:30):

You know who in this state, who the one single person is that can have a real big impact on the direction of this debate? The state auditor. Every time a public tax dollar gets spent in this state, the state auditor can send out a subpoena along with it, and say, “Hi. State auditor here. I want to know what you’re doing with this money.”

But it’s not just subpoenas that they can send out for documentation. They can demand testimony too. They have an incredible ability to investigate as to what is going on with our money.

So we’re two years into privatization, and have we heard anything from the state auditor about what the direction of Medicaid is, or whether or not it’s good or bad? No. Nothing. Not a single word.

And yet, here, we have someone who just on IPTV said last night–they are looking in their investigation, which she said, I can’t tell you whether or not it’s going to be released before the election. Well then, why didn’t you start it earlier? We’ve had this going for two years. Do you care about the public, or do you care about your party? That’s what this comes down to.

And the other thing that she said was, we’re looking at the same information that’s out there in the public. Why? You’ve got subpoena power. If you actually cared about this, you could be sitting people down and having them raise their right hand and answer questions under oath under penalty of perjury. If you cared about what was happening in our state. If you put the public ahead of your party. And they don’t do it. Why?

You help me become state auditor, and those MCOs that just got seven and a half percent raises? They’re going to get subpoenas.

Sand began running two television commercials this week, one lighthearted spot featuring his wife, and another with certified public accountants who support his candidacy. They are good introductions. In the coming weeks, he should distill his message on Medicaid into 30- or 60-second clips for television or radio. Iowans need to know the state auditor could do much more to look out for their interests.

UPDATE: A 60-second radio ad is running in the Des Moines market with the three CPAs expressing their support for Sand. Near the end, one of them says something along the lines of, “With the state budget a mess and Medicaid privatization a disaster,” we need a watchdog like Rob Sand as state auditor.