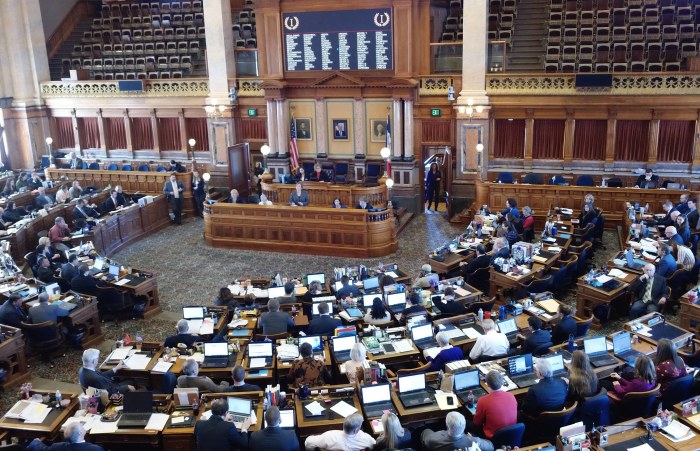 House File 732 cleared the lower chamber by 96 votes to 3 on March 26. Four days later, a member of the advisory board resigned in protest, claiming state lawmakers had misrepresented the board's input and approved a "dangerously high" allowable dosage for some patients. (Bleeding Heartland discussed that House debate here.)

When the Iowa Senate Judiciary Committee considered this bill on April 4, senators recommended an amendment to keep the current THC cap of 3 percent. At that point, the advisory board decided to weigh in on the matter, according to sources at the IDPH.

HF 732 contains some of the recommendations the advisory board suggested on January 1: removing felony disqualifiers, adding physician assistants and nurse practitioners, employment of pharmacy professionals, and collection of data. However, the House bill also lifted the 3 percent cap on THC. The board had recommended keeping the 3 percent cap in place.

At its April 16 meeting (audio available here), the board generally agreed with lifting the 3 percent cap, but did not concur with the House bill's new proposed dosage limit of 25 grams of THC per 90 days. In a letter to Governor Kim Reynolds and state lawmakers, the board suggested changing the THC limit to 4.5 grams per 90 days (50 mg per day).

During the board discussion, Dr. Robert Shreck mentioned that the original House Study Bill 244 created a THC cap of 20 grams per 90 days, but would have allowed the department to reduce that cap. During floor debate, House members amended the bill to increase the allowable 90-day dosage from 20 grams to 25 grams, and removed language permitting the department to lower that amount.

Shreck cited his experience as an oncologist with Marinol, a synthetic THC product.  He said each Marinol tablet contains 10 mg of THC and that prescibing more than four of those per day would be so unsual he would have the Board of Medicine and the Board of Pharmacy knocking on his door the next day.  He said 10mg of THC per day was enough to cause psychoactivity in some of his patients.

Shreck also alluded to studies from the MedPharm website showing averages of 30 mg of THC per day, but I’m unable to find them (I’ve asked MedPharm if they can help me with this). In addition, he cited studies involving Sativex, an inhaled product with 1:1 THC to CBD ratio currently under FDA clinical investigation, showing an average of five to eight sprays per day--which Shreck said is not even 30 mg of THC per day.

Dr. Lonny Miller, a family medicine practitioner, reasoned that going higher than 50 mg per day would discourage more doctors from certifying patients' diagnosis--a necessary step for Iowans wishing to participate in the state's medical cannabis program. In Miller's opinion, a higher allowable dosage would be viewed as authorizing abuse.

Then things began to get really strange.  Miller said the Iowa program was intended to be CBD only.  The advisory board began to discuss topics that were not on the meeting agenda. No one in attendance was prepared to adequately address those items. Furthermore, the board usually allows public comments, but not at its April 16 meeting.

Miller suggested recommending a maximum THC to CBD ratio of 1:1.  Shreck responded that MedPharm produces and distributes a 20:1 THC to CBD product.  MedPharm could not manufacture that product if the board hadn’t approved it.  After Shreck said it would be disruptive to change that limit, Miller withdrew his suggestion.

Miller then proposed that patients under age 18 be limited to 20:1 CBD to THC ratio products and no more than 10 mg of CBD per kg of body weight per day.  He cited pages 78-79 of the Minnesota Department of Health report, showing 10 mg of CBD per kg per day and 20:1 CBD to THC ratio being used in a study on pediatric autism.  Miller offered this idea as a motion, which passed without objection.  No one spoke up for the children who now receive higher THC ratio products.

My sources at the IDPH tell me the legislature did not request further advice from the advisory board.  The board had already submitted its advice on January 1.

State law permits this board to meet only four times per year, so members cancelled a quarterly meeting in May to hold this irregular meeting.  While I’m extemely displeased by what took place, I would say the House leadershp didn't give this matter enough time and thought. Instead, the House bill got rammed through in a hurry, two days before the legislature's "funnel" deadline. The obvious intent was to kill Senate File 501, which was moving through the upper chamber. HF 732 appeared on the same day the Senate Judiciary Committee had passed SF 501.

The advisory board's intervention last week was another link in the chain of last-minute moves that hadn't been thoroughly considered.