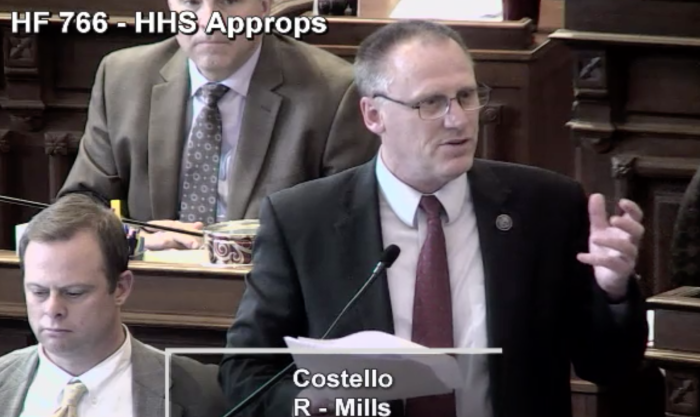 Iowa Republicans choose not to look for overspending on Medicaid prescriptions

The Iowa Department of Human Services will not audit a practice that could be inflating costs for Medicaid prescription drug payments by millions of dollars a year.

However, House and Senate Republicans dropped that section from the final version of House File 766.

State Senator Mark Costello, who floor managed the health and human services budget in the upper chamber, claimed Iowa's Medicaid director Michael Randol and an Amerigroup representative had told him the audit was unnecessary.

The Forbes amendment called for DHS to examine a number of issues related to pharmacy benefit managers, companies that serve as middlemen between pharmacies and entities offering prescription drug coverage.

Democratic proposals rarely advance in the Republican-controlled legislature, but House members voted 98-0 on April 11 to add the audit provision to the DHS budget for fiscal year 2020.

The majority party omitted the Forbes language from the last versions of this budget bill. On April 26, every GOP senator but Tom Greene, a retired pharmacist from Burlington, voted for House File 766. Greene did not respond to an inquiry seeking clarification on his reasoning. The House passed the bill the following day, with yes votes from every Republican but Megan Jones. It's not clear why she opposed the legislation. UPDATE: Jones told The Iowa Standard she had concerns about government data collection.

"AMERIGROUP THOUGHT THERE WAS NO NEED TO DO THIS AUDIT"

Speaking on the House floor on April 27, Forbes sounded frustrated and bewildered as he described the chain of events (beginning at the 12:08:30 mark of this video).

When I found out that the Senate was not possibly going to take it up, I went over and had more than--probably two or three conversations with Senator Costello. And I asked Senator Costello, I said, what's the reason why you don't want to take this amendment on the bill?

And his comment to me was, he had spoken with the representative from Amerigroup, and Amerigroup thought there was no need to do this audit.

I kind of looked at him, thinking, did you just tell me that you spoke with the company that, whose PBM we are going to look at, which is Express Scripts, [and] tell me that Amerigroup didn't think the audit was necessary? He said yes.

Forbes then showed Costello findings from his own audit last year. Using his own financial records and data provided by DHS, he looked at about 800 prescriptions filled through Express Scripts. He also scrutinized OptumRX, the pharmacy benefit manager for UnitedHealthcare, Iowa's soon-to-be-former Medicaid managed-care provider. (OptumRX has faced lawsuits in other states because of questionable billing practices.)

"Their numbers came right to the penny," Forbes said of OptumRX. "Not one claim was off by one penny."

In contrast, the Express Scripts figures didn't always match up. For one drug used to treat some mental health disorders, Forbes' pharmacy was paid $92.03, while Express Scripts billed Amerigroup (and by extension the state of Iowa) $247.58--an additional profit of $155.55 on one prescription.

A drug used to treat high cholesterol resulted in a $175.32 reimbursement to Forbes' pharmacy, while Express Scripts billed Amerigroup $346.14, a $170.82 profit. Forbes examined records for another pharmacy and found comparable results.

Considering that some 4 million prescriptions are filled for Iowans on Medicaid each year, Forbes told fellow lawmakers, he conservatively estimates the state is spending $10 million too much annually. But we can't ensure the state won't be defrauded in the future, he said, because the audit won't happen.

"DIRECTOR RANDOL DOES NOT BELIEVE THAT SPREAD PRICING...IS AN ISSUE IN THE IOWA MEDICAID PROGRAM"

However, Republicans used a procedural trick to block debate on the Democratic ideas. Costello introduced a new strike-after amendment containing some unpleasant surprises on April 26. Once Republicans adopted that amendment, Senate President Charles Schneider was able to rule every other Democratic amendment out of order.

Bolkcom referenced the Forbes amendment during the Senate debate (starting around the 04:32:20 mark). The issue is not going away, he warned. Drug costs keep going up. Through his own research, Forbes spotted trouble. "We should have had an audit in this bill," Bolkcom said, but Amerigroup said it's not a problem.

Costello addressed that point during his closing remarks on the bill. Here's the relevant segment:

DHS took Forbes' concerns "very seriously" and "met with him numerous times" last year, Costello said. Reading from notes, which he said the agency had provided, the Republican added,

[looked up from notes] And so, they do not have concerns with that. And the way that we compensate and set our Medicaid cap[itation] rates [for managed-care companies], it would not be affected by the way that this was calculated.

So it's a very complicated thing, and I'd be happy to share it with you individually, maybe in more detail so I can explain it at more length. But I just wanted--I did look into that, I took it seriously. I talked to a lot of people about it. And I just really don't think that audit is necessary.

The only outcome that might come from that, and I don't think it really would, would be that the PBMs would have to pay the managed-care companies a little bit more. It would never come back to us.

After watching that clip at least ten times, I still can't tell whether Costello was duped or playing dumb.

OTHER STATES SAVE AFTER INVESTIGATING SPREAD PRICING

An audit might not immediately produce revenue for Iowa, but it would reveal the scale of the problem. Following similar investigations, several other states have taken steps to recover overpayments or reduce future spending on prescription drugs.

West Virginia dumped pharmacy benefit managers from its prescription drug program for Medicaid in 2017. Officials projected $30 million in annual savings, and a recent report estimated costs dropped by more than $54 million during the 2018 fiscal year.

In July, CVS sued the state [of Ohio] to prevent the release of a report on how much spread it received from Medicaid programs there. A summary released in June found that CVS and other PBMs’ 8.8 percent spread came to $5.70 per prescription across all brand-name and generic drugs.

Ohio could have gotten the same services for $1.90 per prescription or less by switching to a fee-based model, according to the state-sponsored analysis. The hidden fees Ohio paid amounted to $223.7 million in a 12-month period through March, according to the consultant. [...]

Following the report, Ohio ordered managed-care plans in the state to terminate their spread pricing contracts for 2019.

Louisiana officials decided in 2018 "to eliminate 'spread pricing' in their Medicaid programs, and require new types of contracts."

Pennsylvania's auditor general looked into the issue last year and in December "set out 10 recommendations for legislators such as requiring greater transparency and oversight of PBM pricing and contracts."

This February, a report Kentucky state legislators commissioned last year showed that in 2018, pharmacy benefit managers made $123 million through spread pricing, "a 12.9 percent increase over the previous year."

passed new regulations that eliminate so-called "spread pricing" on prescription drugs within the Medicaid managed care system, a move they say will save taxpayers about $43 million a year. [...]

The change could save taxpayers much more than the $43 million elected officials project, according to a study earlier this year by the Pharmacists Society of the State of New York, which showed the state was overcharged on Medicaid managed care prescription drug claims by nearly $300 million.

Also this month, U.S. Senator Chuck Grassley and the ranking Democrat on the Senate Finance Committee questioned executives for pharmacy benefit managers at a Senate hearing and asked the U.S. Department of Health and Human Services to look into spread pricing on Medicaid prescription drug claims across the country.

Costello may genuinely be ignorant about those developments--though my online search for "Medicaid prescriptions pharmacy benefit managers" turned up numerous news articles in seconds.

Randol must be aware of what is happening elsewhere. It's disturbing that

1) Iowa's Medicaid director assured the Senate Republicans' point man there was nothing to see here,
2) Costello was so easily persuaded to back off, and
3) Senate and House GOP leaders didn't insist on including audit language when Costello was pulling together his April 26 surprise.

The mess sounds like a case for State Auditor Rob Sand, who has promised his staff will thoroughly investigate the privatized Medicaid program.

UPDATE: Sand announced on KCCI-TV on May 2 that his staff will audit the pharmacy benefit managers involved with Iowa's Medicaid program.

“We are paying more than what we need to pay for the drugs that we’re getting,” Sand said. [...]

Sand said it’s analogical to when a “middle man sells you a Ford but then charges the state for a Ferrari.”

KCCI's Alex Schuman interviewed Forbes for an April 25 report on "evidence that the state is overpaying for certain generic medications."

Of the funds appropriated in this section, the department shall use a sufficient amount to audit all prescription drug benefit claims managed by a pharmacy benefit manager under the Medicaid program. The audit shall address issues including but not limited to transparency of data on pharmacy services, the relationship between pharmacy reimbursement and overall costs to the Medicaid program or spread pricing, any potential conflicts of interest related to a retail pharmacy chain that is affiliated with a pharmacy benefit manager and any reported reductions in pharmacy reimbursements, and the impact of reduction in pharmacy reimbursement on access to care, especially in rural areas. The department shall report the findings and recommendations of the audit to the governor and the general assembly by December 15, 2019.