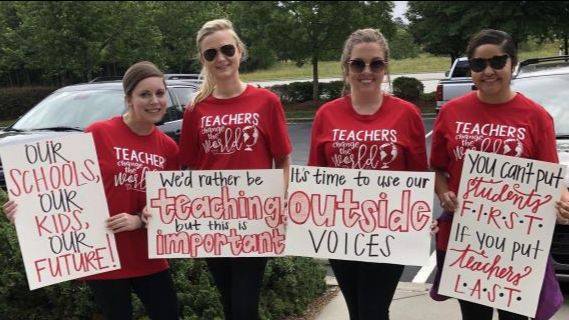 This is the time of the year when “bargaining season” wraps up for Iowa’s teachers. Under the collective bargaining law in place for more than 40 years, most local unions would have either reached a voluntary agreement with their school board or be headed to mediation, or possibly arbitration.

Unfortunately, the bargaining law enacted in 2017 has changed this pattern. Now, local teacher groups can only bargain their base salaries and have limited abilities to seek help through the arbitration process. Consequently, many school boards across the state are offering teachers “one-time” increases in pay with no advancement on a salary schedule. Those increases are often so little that when combined with the additional costs of health insurance, many teachers will be taking home less money in 2019-20 than they did this year.

School officials will say that minimal pay raises stem mainly from a lack of state government support. They are correct that Iowa schools have received historically small increases in state funding over the last eight years. However, some school districts have managed to accumulate a large “pot” of money that can only be spent on teacher salaries, and for some reason, they aren’t spending it.

So where is this pot of money? It’s hidden in something called a “categorical” fund. Categorical funds were created in the early 2000s as part of compromise between Democrats and Republicans that gave schools more money, but limited how the funds could be used. Categorical funds were established to finance talented and gifted programs, the teacher leadership program, and professional development. The same approach gave rise to the Teacher Salary Supplement.

Under the administrative rules adopted to implement this provision in state law, the Teacher Salary Supplement could only be used for

“additional salary for teachers, including amounts necessary for the district to comply with statutory teacher salary minimums; the amount required to pay the employers’ share of the federal social security and Iowa public employees’ retirement system, or a pension and annuity retirement system […].”

The state also required that

In other words, schools must spend every dollar in this fund for teacher salaries every year.

Fortunately, we can track how well school districts are spending the money by looking at documents from the Iowa Department of Education (DOE). According to the latest information the DOE compiled, 109 school districts are in compliance with the law and carry a balance of less than $100.00 for the Teacher Salary Supplement program (98 schools actually have a zero balance).

Regrettably, a number of schools have chosen to ignore the legal requirement. They have allowed those carry-over dollars to grow and grow, contrary to the clear intent of the law.

As of 2018, Iowa school districts were sitting on a combined $11,621,441 just in Teacher Salary Supplement funds. Those funds were specifically meant to be used for teacher pay. The 223 school districts with more than a $100 balance in those accounts are currently sitting on $11,597,456.94. That’s a little over $490 for each of the 23,663 teachers employed in those districts. Here’s the full list of districts, in alphabetical order.

While it’s apparent these funds were designated for teacher salaries, the employees have little ability to force the district to use the money that way. The current bargaining law precludes local teacher groups from negotiating on the distribution of this fund.

Given the tight finances of schools and the small amounts going towards teacher pay, schools need to do the right thing and allocate this money to their teachers.