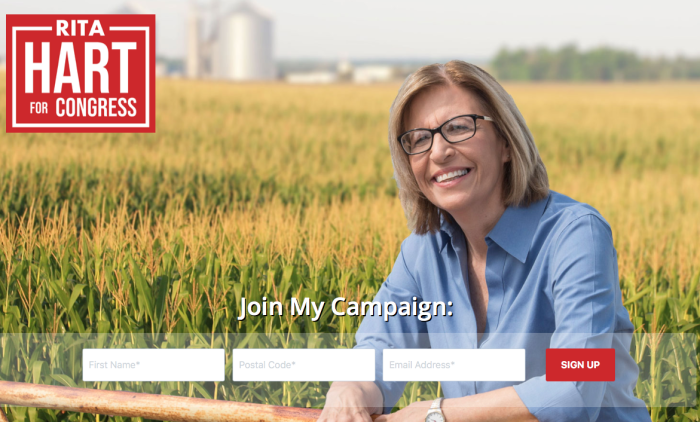 Former State Senator Rita Hart will run for Congress in Iowa's second district, she announced this morning. Her campaign is online at RitaHart.com and on Twitter @RitaHartIA.

1. She is a good fit for the district.

Although Loebsack has represented IA-02 since 2007 and survived three Republican wave elections, this district is far from safe for Democrats. Its partisan voter index is just D+1, indicating that in the last two presidential elections, voters in these 24 counties were only about 1 point more Democratic than the country as a whole. Scott County (containing the Iowa side of the Quad Cities) and Johnson County (containing the Iowa City area) are the population centers of IA-02, but combined, those counties contain fewer than half of the district's Democrats and around 40 percent of all registered voters.

Hart taught English in smaller school districts for two decades and has farmed in Clinton County since the 1980s. After winning an open-seat race in Iowa Senate district 49 in 2012, she was re-elected despite the GOP landslide two years later. Her Senate district included Clinton County and parts of Scott County outside the Quad Cities (map). She should be able to keep GOP margins down in rural areas.

As Bleeding Heartland discussed in more detail here, the key to keeping IA-02 in Democratic hands will be doing well not only in the largest counties, but also in the mid-sized cities that used to (but no longer) consistently provide good margins for Democratic candidates. Loebsack carried the counties that include Burlington, Ottumwa, Keokuk, Muscatine, and Clinton the last several election cycles, while 2016 presidential nominee Hillary Clinton lost them all, and 2018 candidate for governor Fred Hubbell carried some of those areas but didn't match Loebsack's share of the vote anywhere.

Click on any county on this map to bring up the vote totals and percentages for Loebsack, Peters, Clinton, and Donald Trump in 2016. The colors represent the Congressional results; Clinton carried only two of these counties: Johnson and Scott (barely).

Loebsack won with more than 60%

This map shows how Loebsack, Peters, Governor Kim Reynolds, and Hubbell did in each county in 2018. Again, the colors represent the Congressional results. Hubbell carried six of the nine counties that voted for Loebsack: Johnson, Scott, Lee, Des Moines, Jefferson, and Clinton (barely).

Loebsack won with more than 70%

Peters won with less than 50%

This post includes county-level results from 2016 and 2018 in table form, for those who prefer to view the data that way.

2. She built up tremendous goodwill among Democrats during the governor's race.

As the 2018 lieutenant governor nominee, Hart became better known statewide and was universally considered an asset to the ticket. I cannot recall hearing one complaint about her performance on the campaign trail. On the contrary, many Democrats (especially in rural counties) grumbled that the Hubbell campaign didn't do enough to put Hart in front of voters, both in person and on television.

I anticipate at least one other candidate will file for the Democratic primary in IA-02, but beating Hart would be quite difficult. State Senator Kevin Kinney already ruled out this race, and State Senator Zach Wahls has said he would not run for Congress if Hart does.

Hart's candidacy may scare off some prospective Republican candidates as well. So far Osceola Mayor Thomas Kedley is the only declared GOP contender here. Bobby Schilling, who represented an Illinois district in the U.S. House for two years, is "98 percent certain" to run as well, John Gizzi reported for Newsmax on May 13.

Final note: Clinton County lies on the northern edge of this Congressional district and was part of the first Congressional district during the 1970s, 1980s, and 2000s. If Hart manages to win next year's primary and general elections, Iowa's new political map following the 2020 census could force her to move in order to seek a second term. Loebsack traveled that path in 2011, when redistricting put Linn County in IA-01, covering most of northeast Iowa.

UPDATE: Daniel Clark, who filed in IA-02 as an independent candidate in 2018 and won about 0.6 percent of the vote, had been considering a Democratic bid next year. He announced on Twitter on May 15 that he is endorsing Hart instead. Clark noted,

LATER UPDATE: State Representative Bobby Kaufmann told James Q. Lynch of the Cedar Rapids Gazette on May 19 that he will seek re-election in Iowa House district 73 instead of running for Congress in 2020.