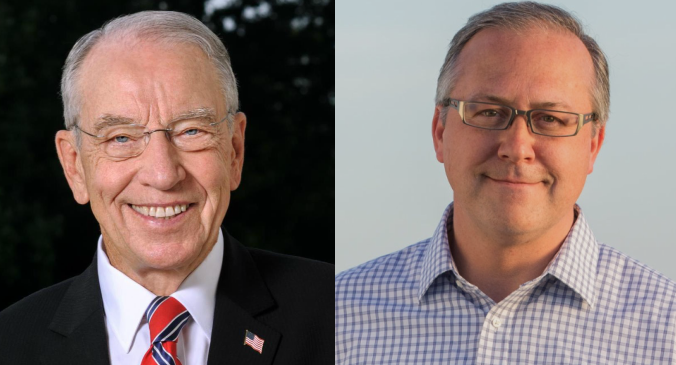 "He knows how to get things done": Grassley endorses Young for IA-03

Senator Chuck Grassley is urging Republicans to support former U.S. Representative David Young in the primary for Iowa's third Congressional district. In a written statement released on May 20, Grassley described his onetime chief of staff as "an effective leader" who "knows how to get things done" and could "hit the ground running" if elected to the House again.

Grassley rarely endorses in Republican primaries and did not publicly support any candidate before the GOP primary in 2014, the first time Young ran for Congress. That year, Young finished fifth out of six GOP contenders but won the party's nomination on the fifth ballot at a district convention.

Young became the first declared challenger to U.S. Representative Cindy Axne earlier this month. Army veteran Bill Schafer will also seek the GOP nomination. The National Republican Congressional Committee, the main campaign arm of U.S. House Republicans, is rumored to prefer State Senator Zach Nunn. He is positioning himself as part of "a new generation of leaders." While not yet officially running, Nunn is touring the district and recently alluded to Young in an interview as “a good man, but we don’t want to see a repeat of 2018." Nunn briefly worked in Grassley's Washington office, but Young worked for the senator from 2006 to 2013.

Appearing on Iowa Public Television's "Iowa Press" program on May 10, Craig Robinson of The Iowa Republican blog was bullish on Young's prospects, saying,

If you look at how David performed in 2016 and compared it to 2018 you see that there was about a 13 point drop off in the part of the district that he won in 2018. So there's plenty of I think votes out there for him to get that could help him recapture this seat. Republicans don't have a problem I think with who David Young is, the type of campaign he runs, it was just kind of the perfect storm that knocked him out and I think if there's ever an opportunity to have, to give someone another shot at getting the seat back, I think this is a good one for David to take on.

[O.Kay] Henderson: But he may have a primary, he may have to run against newly-minted State Senator Zach Nunn, who was formerly in the Iowa House and an Iowa National Guardsman. Can he win that primary?

Robinson: I think he can. I think David has the advantage in that race. Strong name ID, his constituent services were outstanding and look, he's got a good report [rapport] with activists. He has worked hard, he was in a difficult primary and won that contested convention. Zach Nunn I think is an impressive, upcoming leader in the Republican Party, but David Young has an awful lot of name ID and an existing campaign apparatus to strap right into and start running again.

Van Meter, IA -- Today, Sen. Chuck Grassley announced his endorsement of David Young for Iowa’s Third Congressional District seat. Young announced his candidacy on Monday, May 6. He previously represented the people in Iowa’s Third Congressional District for two terms from January 2015 to January 2019 where he served on the House Appropriations Committee.

"I am honored to have the endorsement of Sen. Grassley. He's a good friend and great leader for Iowa and I'm humbled to have his support in this important race," said Young.

The following quote is attributed to Sen. Grassley.

"There’s nobody better positioned to do more for Iowans in the Third Congressional District than David Young. He has already served Iowans with dedication in the district for two terms, making their concerns his top priority, from Pottawattamie to Polk counties and every county in between.”

“An effective leader, David will be able to again hit the ground running immediately like he did when he was first elected to Congress. And before that he worked side by side with me as my Chief of Staff, delivering for Iowans every day of the week. So he knows how to get things done.”

“Iowans in the Third Congressional District know they can count on David. He puts their interests over partisan politics. I am proud to endorse David. We need David back in Congress."

UPDATE: Speaking at the Westside Conservative Breakfast Club on May 22, Young attributed his loss to a "blue wave" that "A lot of people don't want to admit" happened, Barbara Rodriguez reported for the Des Moines Register. Asked by an audience member why Republicans should stick with him, Young said,

"I will tell you this: I'm focused on Cindy Axne. I've won this district twice with your help. You know who I am. I know who you are. And I'm in it early. I'm that serious, and that's why I'm taking the fight."

He defended President Donald Trump's trade policies ("I don't like tariffs. But I don't like bad trade deals") and tried to connect the incumbent to Democratic proposals like the Green New Deal and Medicare for All (policies Axne has not endorsed).

Young admitted, "But it's frustrating when you do win 15 of the 16 counties ... but you know what, we're not quitters. I'm not a quitter."

Republicans make much of the fact that Axne won "only" one county, glossing over the reality that more than half the district's registered voters live in Polk County. Axne also carried the county by a historically large number (more than 33,000 votes). Once again, I'm posting this interactive map showing the vote totals and percentages for Axne and Young in the 2018 election. (Percentages don't add up to 100 because four other candidates were on the ballot.)