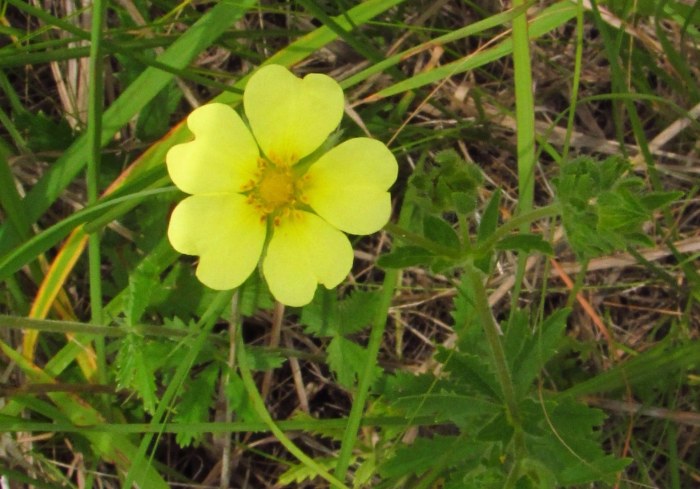 Among roughly 200 wildflower species featured on this website since 2012, all but a dozen have been native to North America. Today's plant is one of the exceptions.

Sulfur cinquefoil (Potentilla recta), also known as Rough-fruited cinquefoil, is indigenous to Eurasia but can now be found in almost every U.S. state and Canadian province. Like many non-native plants, it thrives on disturbed ground. According to the Illinois Wildflowers site, "Habitats include limestone glades, pastures and abandoned fields, vacant lots, roadsides, gravelly areas along railroads, compacted soil along grassy paths or dirt roads, infrequently mowed lawns, weedy meadows, and waste areas."

Although the U.S. Wildflowers site describes this plant as invasive, the ecological consultant Leland Searles told me, "It’s introduced but not aggressive."

I took all of the enclosed pictures on Mike Delaney's restored Dallas County prairie, mostly in late June. Searles speculated that this plant may have found its way there through some prairie seed mix.

"Pale yellow flowers, each with five notched petals," are the key identifying feature for sulfur cinquefoil. 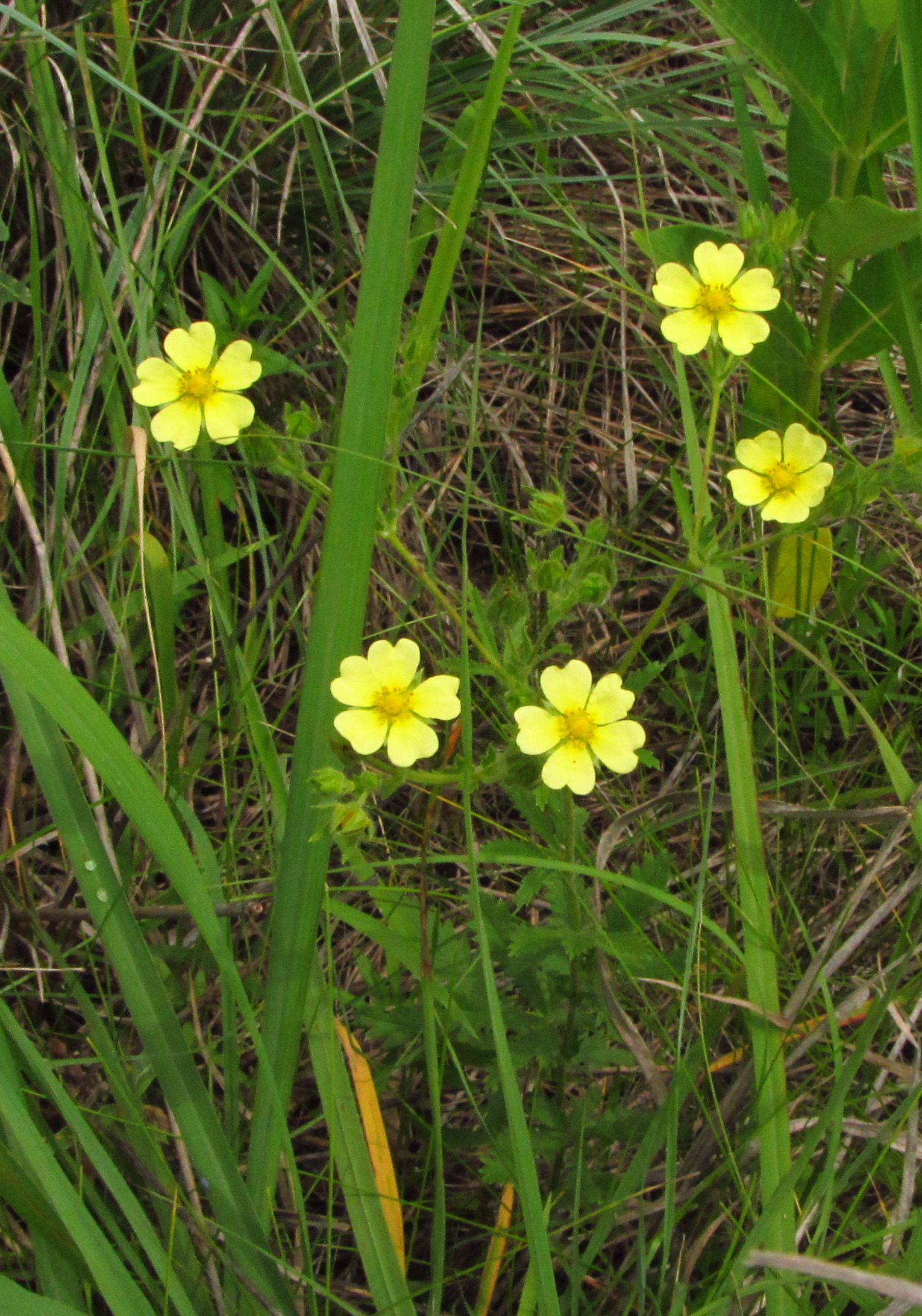 The Minnesota Wildflowers website explains, "The flowers vaguely resemble Tall Cinquefoil (Potentilla arguta), but its flowers are white and its leaves are pinnately compound rather than palmate."

In the next few photos, you can see the sulfur cinquefoil's palmate leaves. 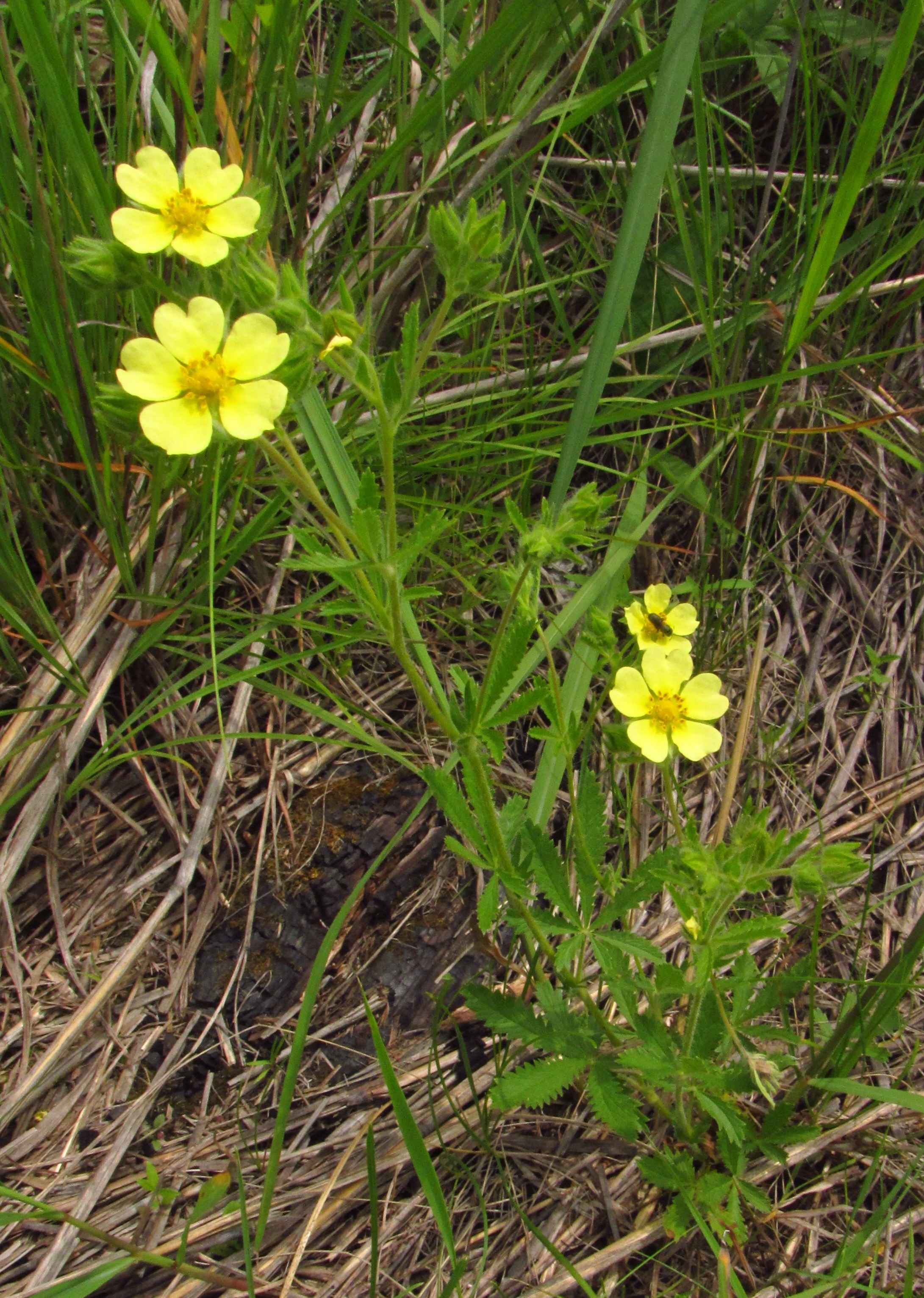 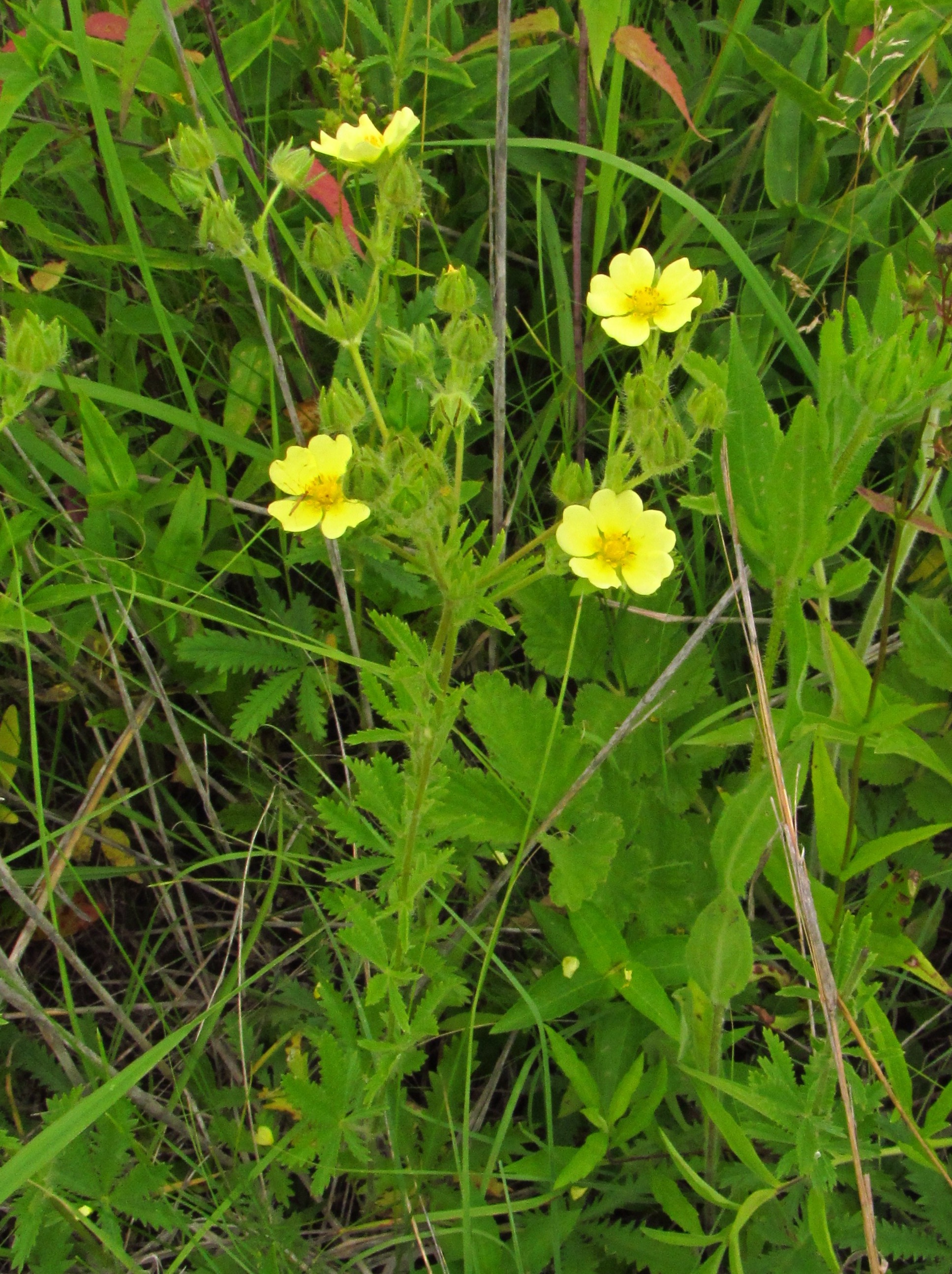 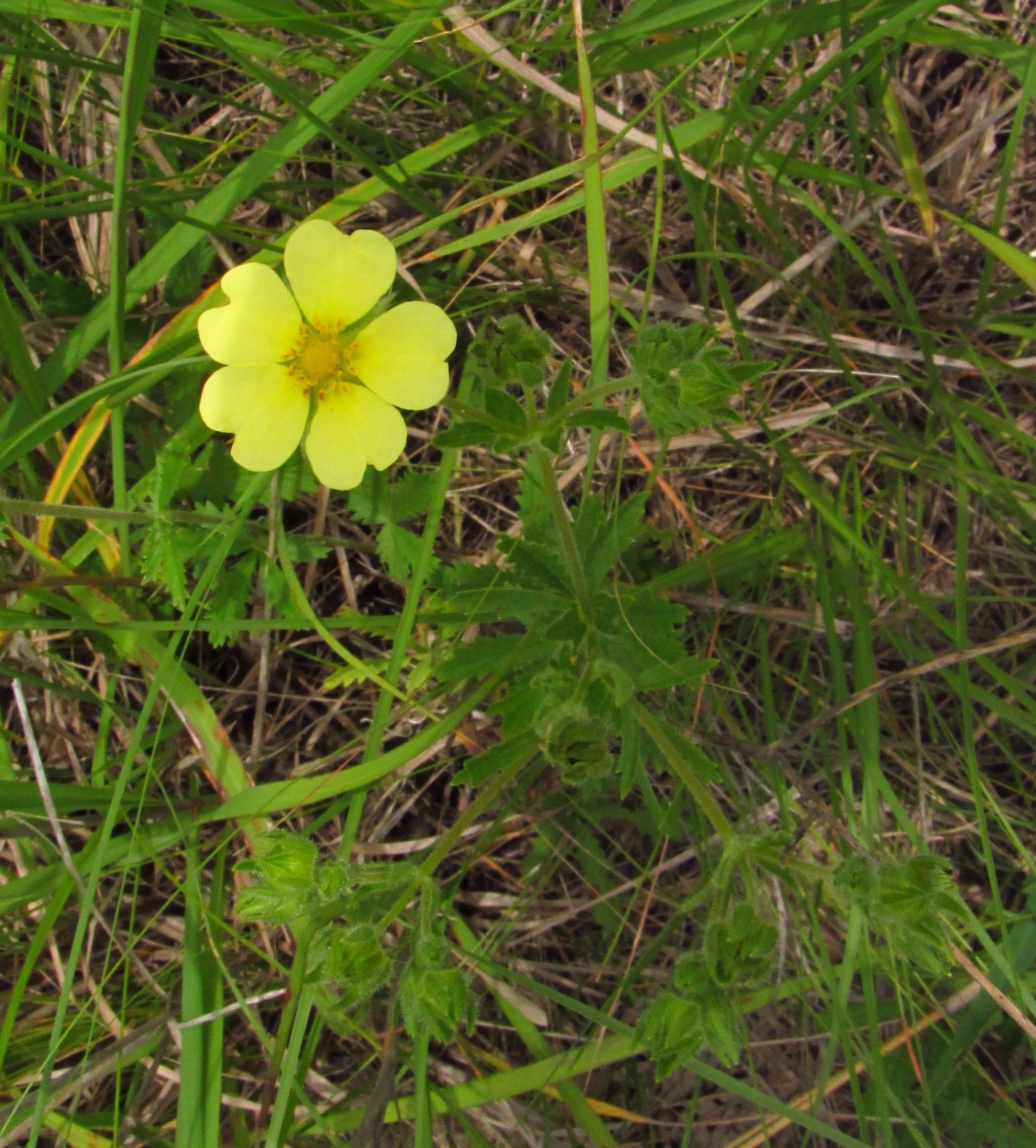 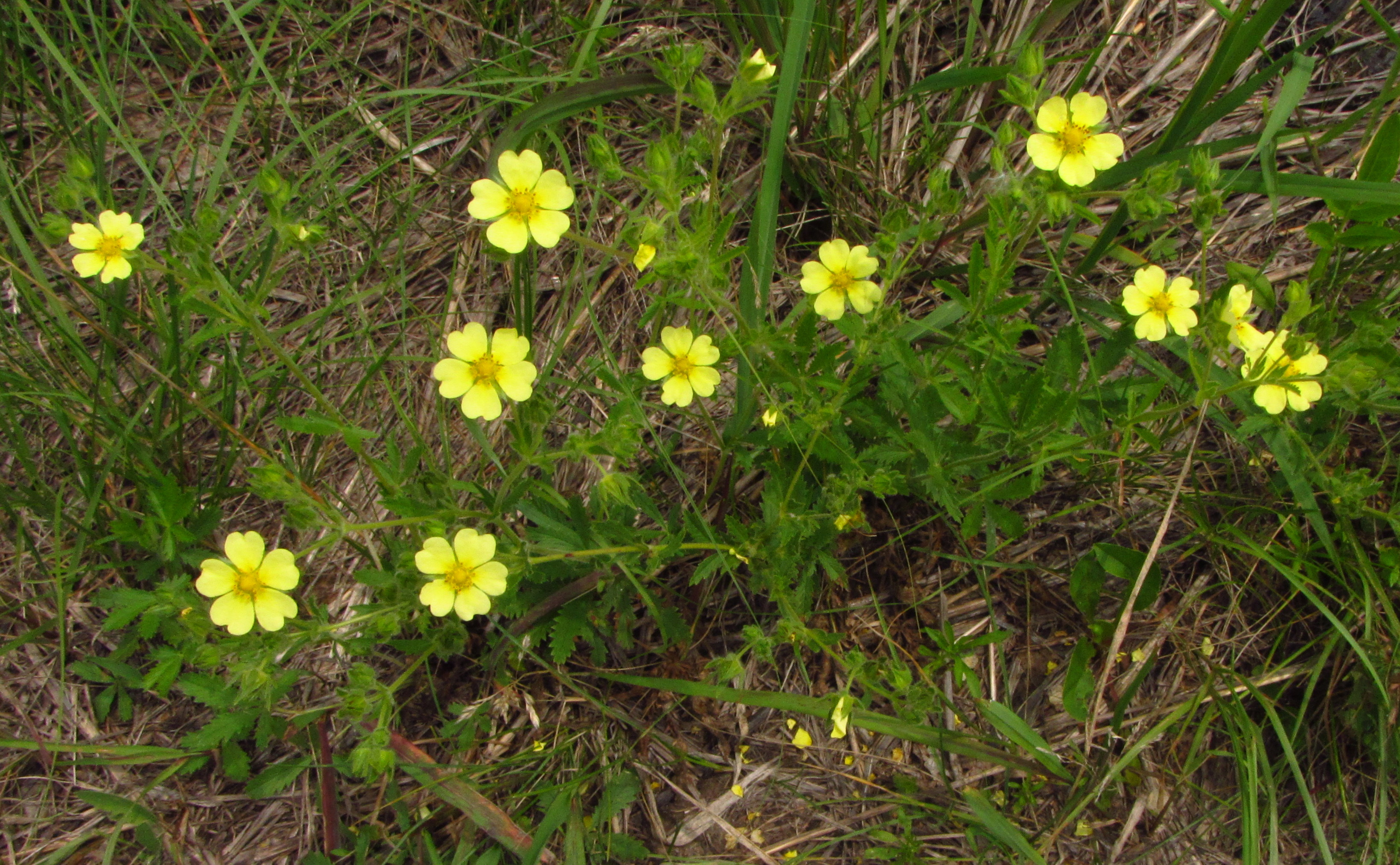 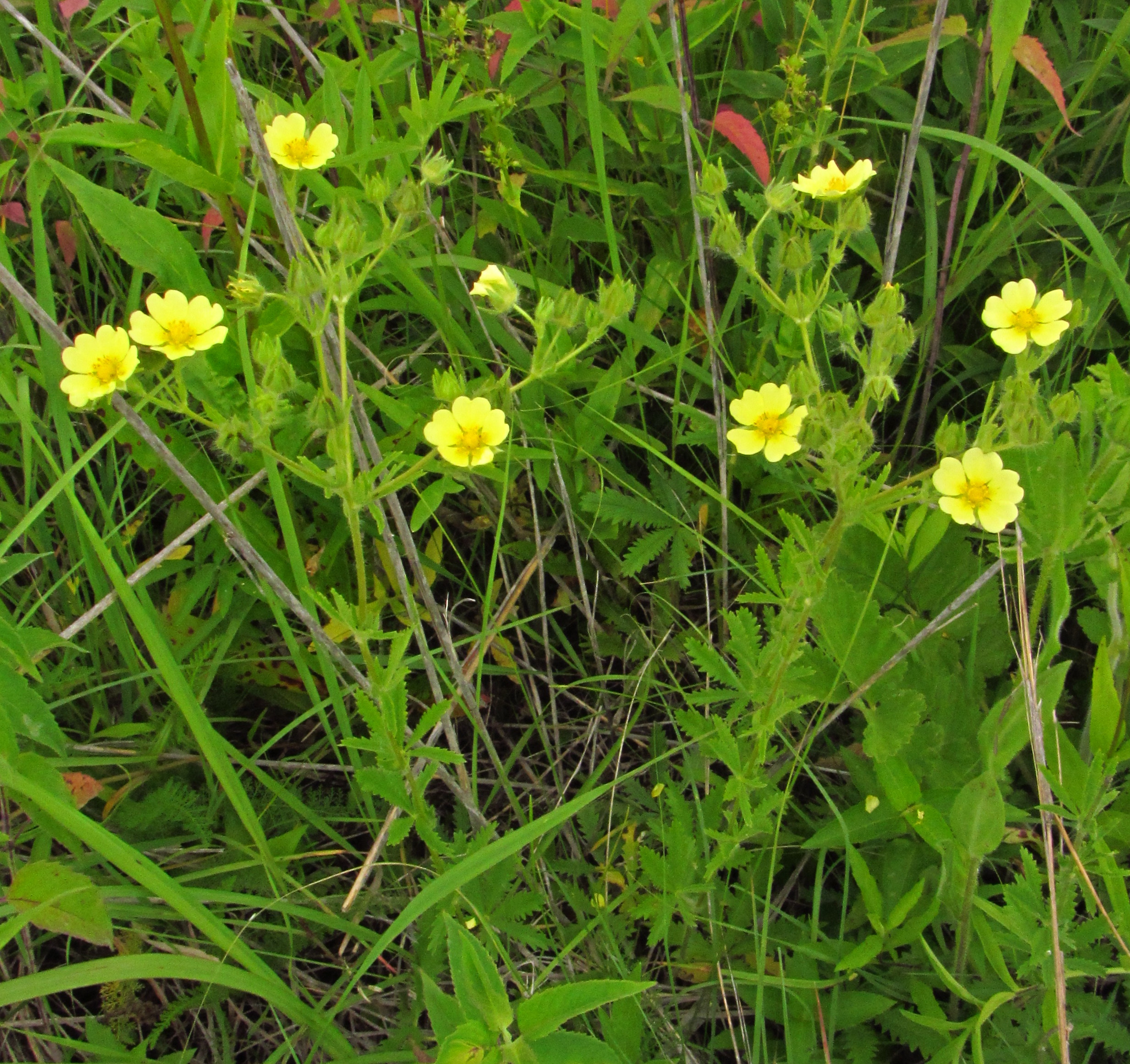 Sulfur cinquefoil does well in "partial to full sun, mesic to dry conditions, and soil containing loam, clay, sand, or gravel," the Illinois Wildflowers site writes. I prefer to photograph wildflowers when it's shady or overcast, but the sun was out when I took the next two shots. 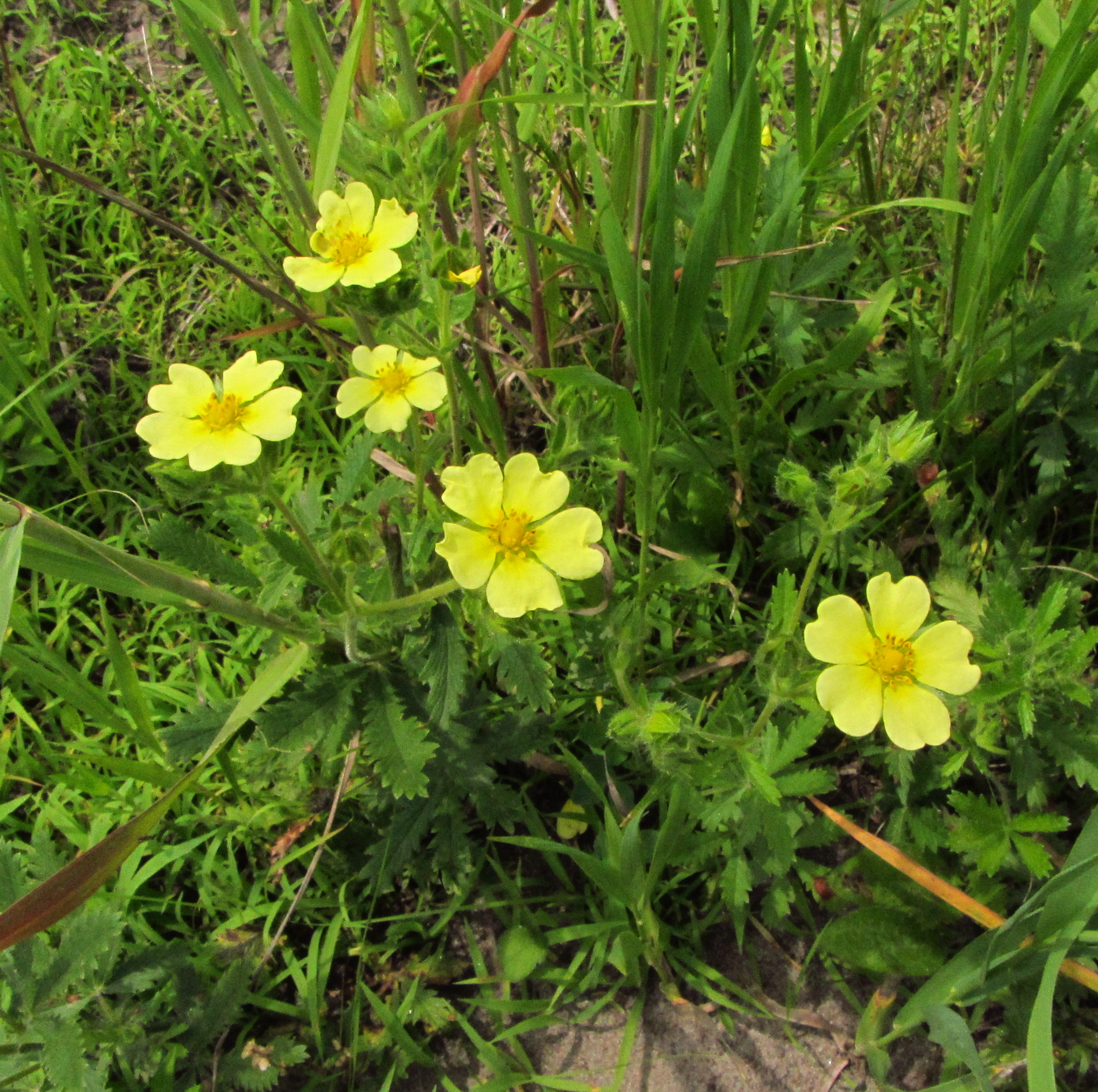 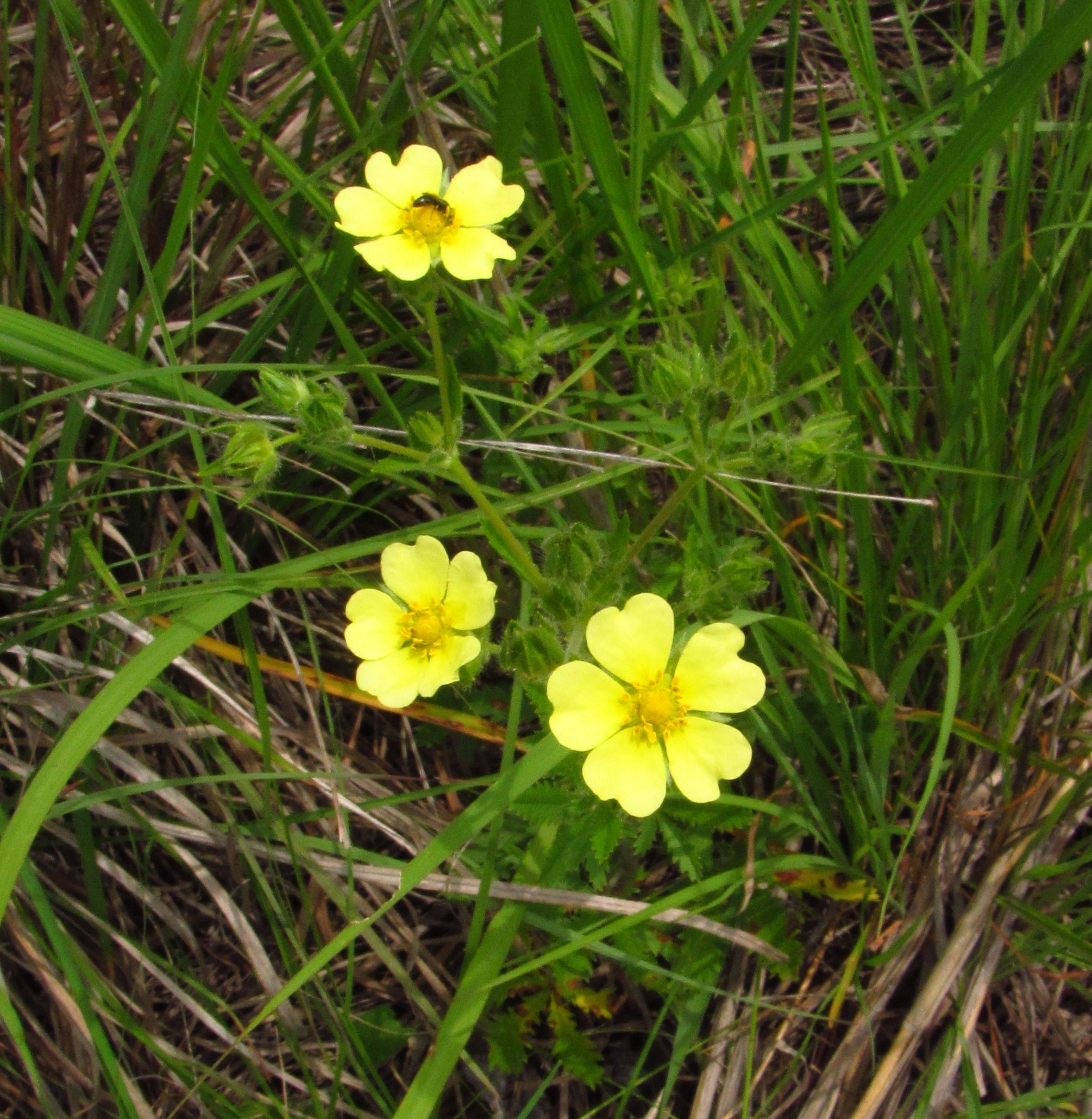 Here's sulfur cinquefoil growing near hoary vervain, which is also a common sight along roadsides. 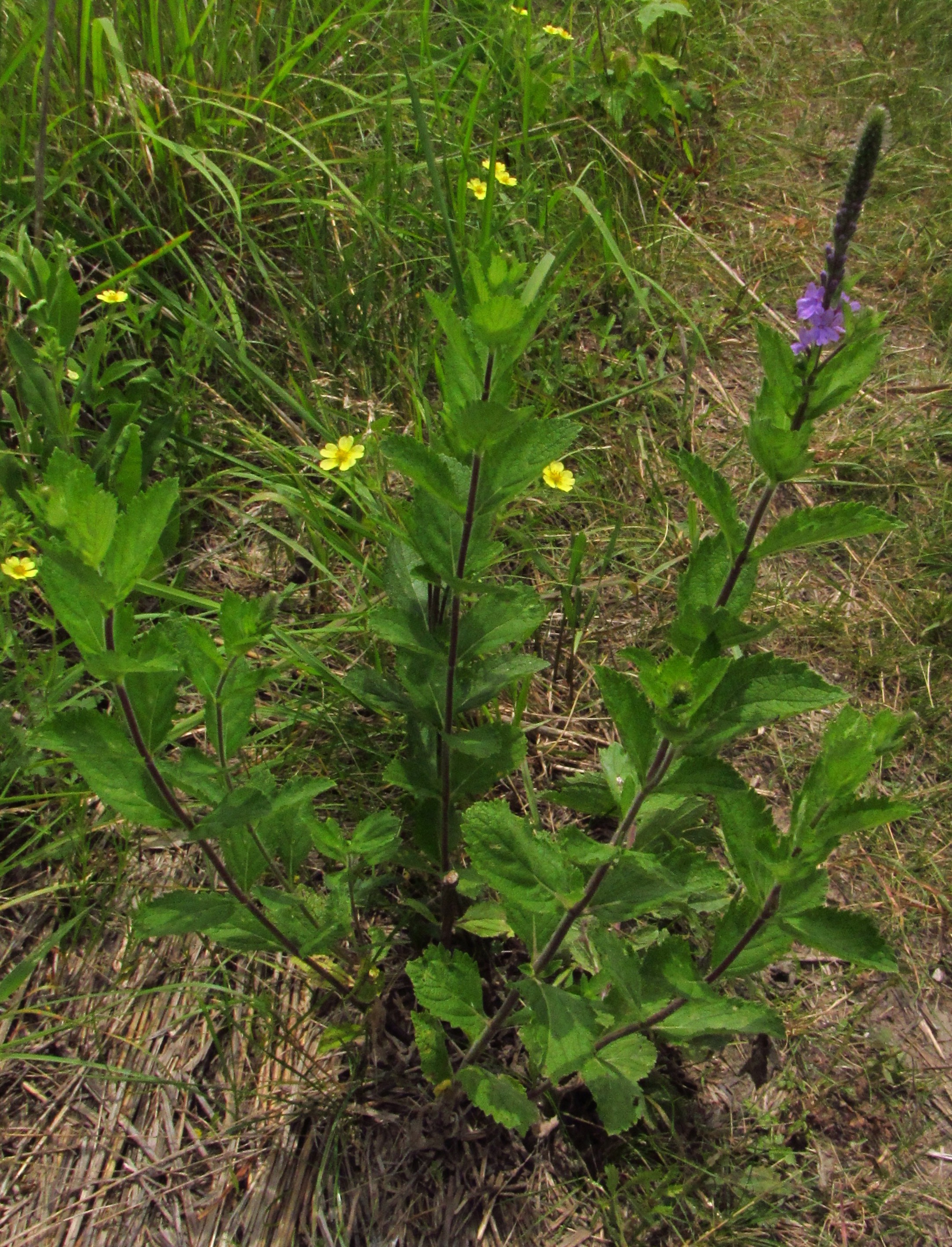 That's daisy fleabane in the background. 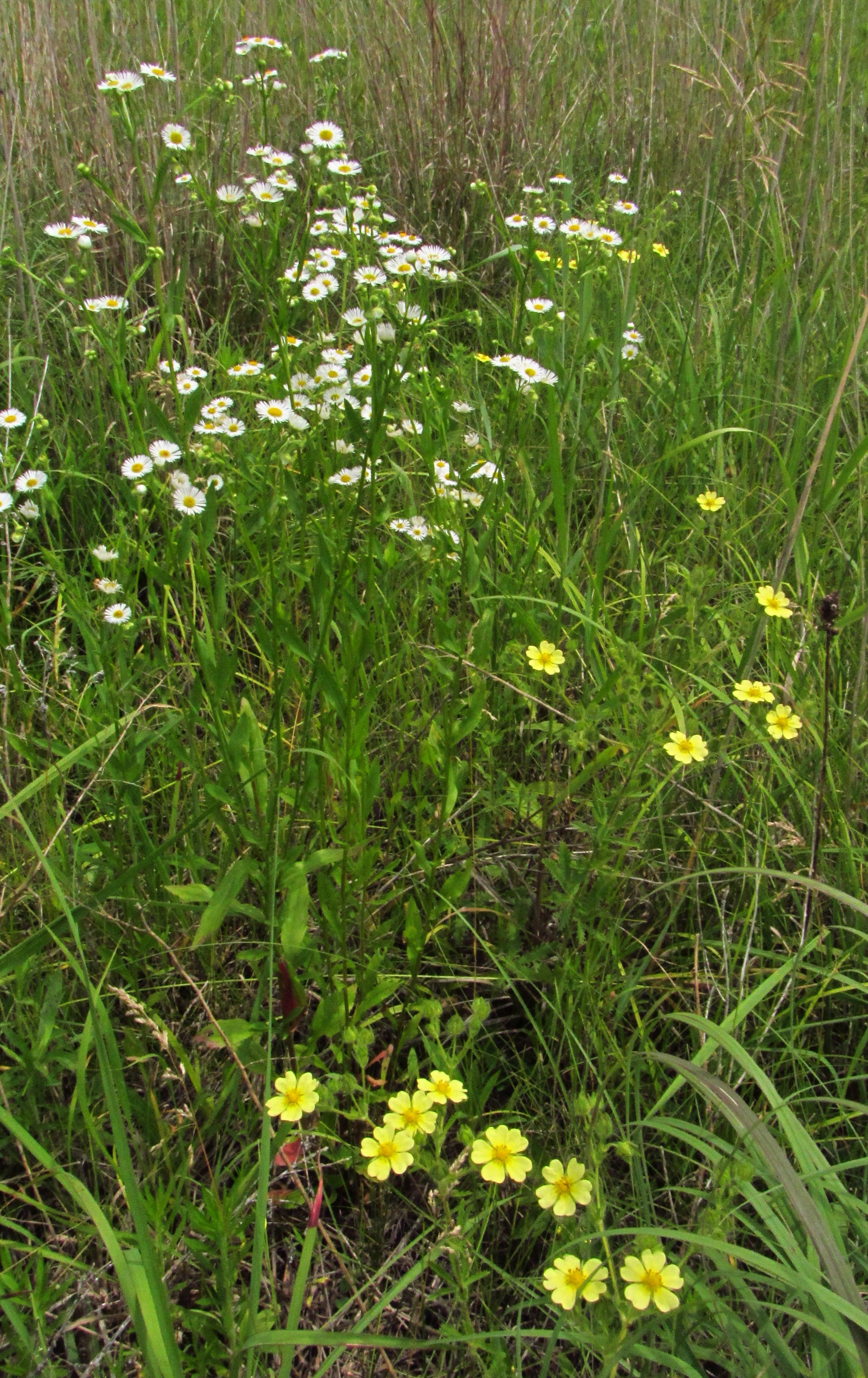 The drooping plants near the bottom of the frame are round-headed bush clover, which will bloom later in the summer. 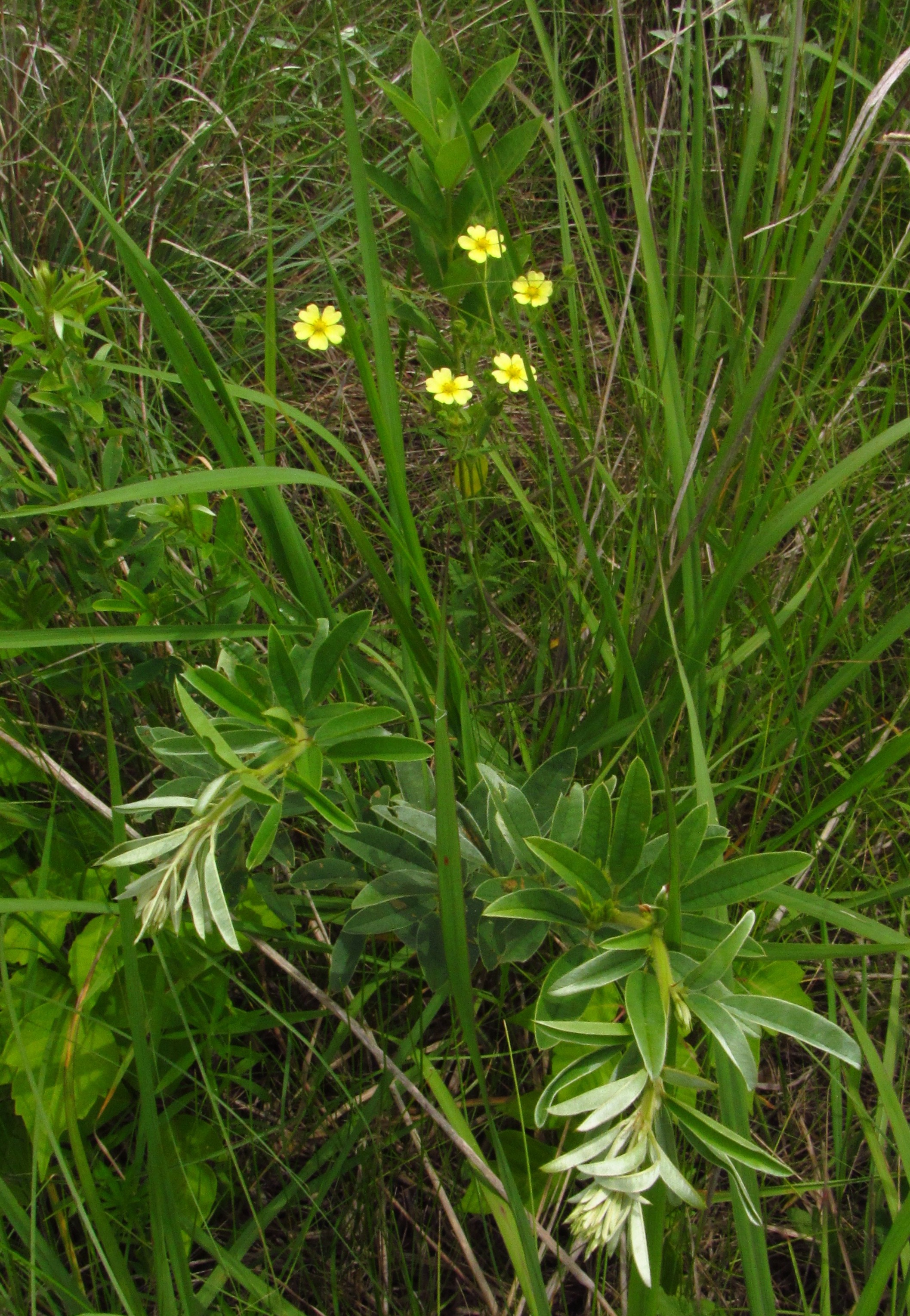 As the fruit develops, "The sepals fold up creating a capsule-like container. Inside are numerous brown seeds." You can see the fruit forming in this last photo, which I took at Delaney's prairie on July 23. I didn't find many sulfur cinquefoil plants that evening, probably because most had finished blooming. 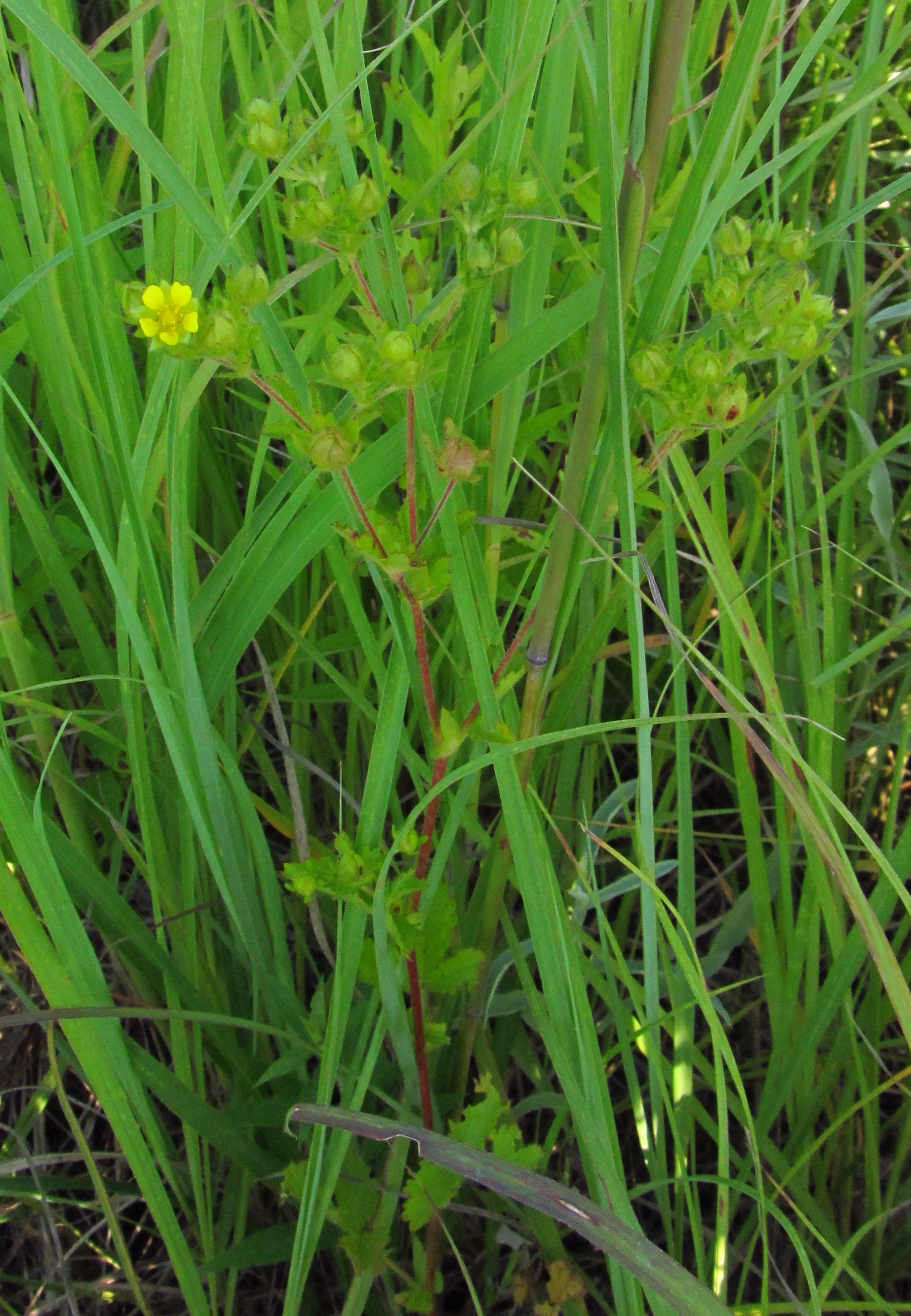