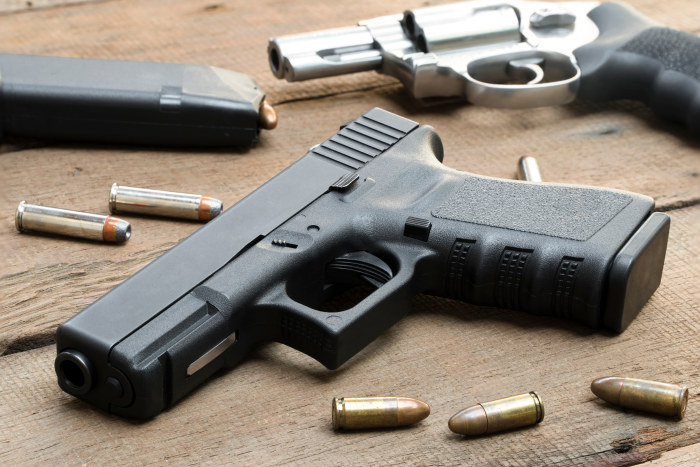 Ira Lacher: "Bump stocks and assault weapons notwithstanding, if we seriously want to reduce the number of gun deaths in this country, we need to have a come-to-Jesus debate about guns. But we're not seeing that debate." -promoted by Laura Belin

So, Republicans are finally and grudgingly moving forward on gun control. Consider these headlines:

From the Washington Times: Trump on gun legislation: 'Common sense things can be done'

Wow! Guess the public is getting to the president and Congressional Republicans after all. We can breathe easier, now that it seems we'll be getting some commonsense laws that will at least severely restrict gun violence in America.

As America and the world reacted in horror, shame and anger to the latest mass shootings, 81 people were shot to death throughout the country over a 72-hour period. That's about 50 more than were killed in El Paso, Texas, and Dayton, Ohio. And, according to research, many shooting victims are women, targets of domestic violence. Which means the women were killed not by a mentally ill person with an AR-15 but by someone they knew, with a handgun.

Others took their own lives with a gun. Half of all suicide victims result from gunshots.

You may ask, isn't a considerable proportion of gun violence perpetrated by criminals? Yes. But you also should ask: Where did the criminals get their guns?

Many are stolen. Nearly four hundred thousand each year. From lawful private gun owners. Who bought them legally. By passing background checks. Because there was no reason to prevent them from owning a gun. And no law requiring owners to secure them.

So the argument "if you criminalize guns, only criminals will have guns" is specious. Good people with guns are letting bad people get guns.

Bump stocks and assault weapons notwithstanding, if we seriously want to reduce the number of gun deaths in this country, we need to have a come-to-Jesus debate about guns. But we're not seeing that debate.

Sixteen candidates appeared Saturday at the "Presidential Gun Sense Forum" in Des Moines. Everyone called for more and better background checks. Many called on Walmart to stop selling guns. Andrew Yang proposed a federal buyback. Joe Biden called for a look-see at the Second Amendment but typically stopped short of proposing anything specific. It was more mush from the wimps.

Nor are we seeing a debate over laws requiring firearms to be "smart guns" -- capable of being fired only by one registered owner. This technology exists. But it has been stymied for more than 20 years by the National Rifle Association and their toadies in Congress. The same toadies, such as Senate Majority Leader Mitch McConnell, who told a Kentucky radio station recently that he would allow debate on wider background checks, prospective gun buyers' mental states, as well as “red-flag” laws, which would allow law enforcement to separate a gun from a person deemed likely to use one.

McConnell, and all gun advocates, would gladly bend on those proposals. Because gun advocates know those would keep gun control advocates happy . . . and deluded.

Research shows that a person is more likely to use a gun if they have access to one than if they are mentally ill. The president of the American Psychological Association, Rosie Phillips Davis, noted that America has no monopoly on the number of mentally ill individuals. What it has is a gun glut. "One critical factor," she said after the El Paso and Dayton carnage, "is access to, and the lethality of, the weapons that are being used in these crimes. Adding racism, intolerance and bigotry to the mix is a recipe for disaster.”

So the next time you hear Republicans graciously willing to "defy the NRA" and discuss "commonsense gun solutions," or Democrats decrying lax gun laws, treat those with the same disdain as you regard our president reading scripted words from a teleprompter: They do not matter. Wider background checks and red-flag laws won't make a difference to the woman who is shot by an abusive husband. Or a person who is killed by gun during a bar fight. Or a despondent teenager who wants to leave the world. Or a child who happens to be caught in the crossfire between gang members. Who very likely obtained their guns from law-abiding persons exercising their rights under the Second Amendment.

And now, for the next 72-hour death clock.

P.S. Many of you noted that in my last blog post advocating repeal of the Second Amendment, I did not state the text of the amendment. I intentionally did not do this because I wanted to point out that we have abused the so-called right, not call attention to how it has been misinterpreted by those who are deficient in the application of English punctuation. But here it is. And note the commas:

"A well regulated Militia {COMMA) being necessary to the security of a free State (COMMA) the right of the people to keep and bear Arms (COMMA) shall not be infringed."