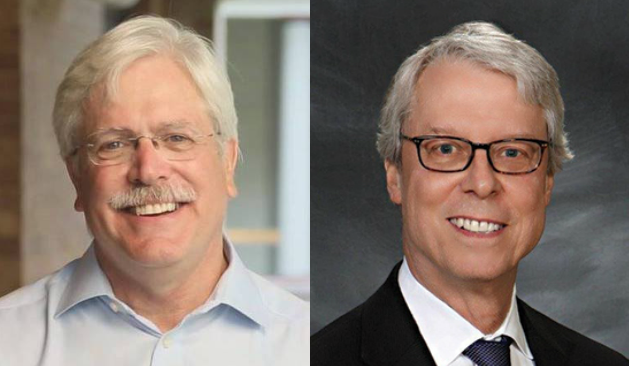 In recent days, numerous Democrats living in the capital city have received a lengthy telephone poll testing positive messages about Hatch and mostly negative messages about Mayor Frank Cownie, a four-term incumbent who has held the position since 2004.

Hatch did not immediately respond to a phone call and e-mail seeking comment on his plans and whether he commissioned the poll. I've paraphrased the questions below, based on detailed notes from a source who took the survey on September 9, and will update this post as needed when Hatch makes his intentions clear.

To qualify for the November 5 election ballot, Hatch would need to submit nominating papers by September 19.

Although Hatch has the means to self-fund a citywide campaign and plenty of time to collect the required 158 voter signatures, he would enter a mayoral race as the underdog. He is well-known locally as a longtime state legislator representing part of the city, a property developer, and the Democratic nominee for governor in 2014. But he has little time to build a case against Cownie, the longest-serving mayor in Des Moines history.

To win the election, Hatch and the other mayoral challengers, Joe Grandanette and Chase Holm, would first need to hold Cownie below 50 percent of the vote on November 5. Then the top two vote-getters (presumably Cownie and Hatch) would face each other in a December 3 election. Des Moines is among the Iowa cities with a runoff provision in their election codes.

This survey has all the hallmarks of a legitimate poll used to evaluate which arguments might persuade voters to support Hatch or oppose Cownie. The questionnaire is long, and the survey ends by collecting some demographic information that would aid in analyzing the results. Though some sources have described it to me as a "push poll" for Hatch, push polls are not genuine surveys. They are very short and have only one purpose: to spread damaging information about someone to a large group of voters, not a representative sample of the electorate.

The first few questions were typical voter screens. Respondents were asked to confirm their address, indicating that the pollster drew the sample from a file of voters, presumably those with a history of participating in local elections. Are you a registered voter? A Democrat or Republican? Are you very likely/somewhat likely/not at all likely to vote in the city council and school board races this fall?

Those who made it past the screen answered the rest of the survey.

Do you think Des Moines is moving in the right direction or wrong direction?

What issue is most important issue to you? (Open-ended question, the caller did not read a list of options)

What's the next most important issue to you? (another open-ended question)

What is your opinion of Frank Cownie, Joe Grandanette, Jack Hatch, and Chase Holm? Respondents were asked whether their view of each man was very favorable, somewhat favorable, or not favorable

First ballot test: If the mayoral election were held today, would you vote for Cownie, Grandanette, Hatch, or Holm?

Measuring opinions about the mayor and city government

Next, a series of questions about the mayor's job performance. Is Cownie doing an excellent job, good job, fair, poor job?

For the next eight questions, respondents were asked whether the mayor or the city of Des Moines was doing an excellent, good, not so good, or poor job.

How is Cownie handling the opioid epidemic in Des Moines?

How is Cownie handling the city of Des Moines and public schools?

How is Cownie handling affordable housing?

How responsive is the city to neighborhoods?

Testing messages about the candidates

For the next several minutes, the questionnaire focused on arguments that could be used for or against the candidates. The caller read a bit of biographical information on each. Hatch was described as a state senator who worked on Medicaid and opposed the state takeover of the water supply. Cownie's business background as the owner of Cownie Furs was mentioned. Grandanette was said to make listening to taxpayers a priority. My source didn't catch what the caller said about Holm, an army veteran who calls for ending homelessness, decriminalizing cannabis, lowering property taxes, and increasing the supply of affordable housing.

Second ballot test: if the election were held today, which candidate would you support?

Third ballot test, naming all four candidates: if the election were held today, which candidate would you support?

Fourth ballot test, naming all four candidates: if the election were held today, which candidate would you support?

The poll wrapped up with a few demographic questions (personal income, race). Then the caller asked the respondent to confirm his or her first name, again indicating the pollster was working from a list of voters who participate in city elections.

UPDATE: Hatch did not respond to Bleeding Heartland's inquiry. Cownie announced on September 11 that he will seek a fifth term. His campaign's news release following the event:

Mayor Cownie, who has served the city in various roles for more than 20 years, launched his re-election campaign on the steps of City Hall in front of a crowd of supporters from all over the city. Following the announcement, Mayor Cownie submitted his nomination petition signed by hundreds of residents representing each of the city’s four wards.

The election is Tuesday, November 5.

The longest-serving mayor in Des Moines history, Cownie was elected to the position in 2004. Previously, Mayor Cownie served as an at-large member of the City Council and chair of the city’s Plan and Zoning Commission.

Since Cownie took office as mayor, Des Moines has received numerous accolades, being recognized as a top place to live, work, and raise a family. The city has recently been named the No. 5 best place to live in the U.S., No. 2 city for young homebuyers, a hot spot for data and science jobs, the No. 6 best place to work in tech, the No. 3 most affordable place to live in the U.S., the No. 1 most popular city for millennial homebuyers, one of the best places to retire in the Midwest, one of the most recession-proof cities, and the No. 8 best job market in the country.

“During the past 15 years, Des Moines has become a truly world-class city,” Cownie said. “But our work is not finished. To thrive in the future, Des Moines must attract quality jobs, protect its natural resources, and provide safe neighborhoods, clean parks, and affordable housing for its citizens. I’m running for mayor because I want to ensure Des Moines is a city our children and grandchildren want to call home.”

During Mayor Cownie’s tenure, Des Moines has added numerous amenities for its residents, such as the Pappajohn Sculpture Park, the Principal Riverwalk, and the revitalized East Village. Thanks in-part to Cownie’s advocacy for environmental issues and sustainable growth, several LEED-certified buildings have been constructed, including the offices of Wellmark Blue Cross Blue Shield and Nationwide Insurance.

The improvements, however, have not been limited to downtown. With Cownie as mayor, the city has prioritized its neighborhoods, including new initiatives to improve roads, remove blight, and reduce flood risks.

A strong advocate for parks and recreation, Mayor Cownie has announced a goal for every resident of Des Moines to live within 10 minutes walking distance of a park or trail.

Mayor Cownie has also been a strong advocate for equality and social justice through programs such as the city’s Bridging the Gap initiative and the Des Moines Compassionate City resolution.

Mayor Cownie owns and operates Cownie Furs, which was founded by his grandfather and has been a Des Moines institution for more than 110 years. Frank and his partner Tina have six children and seven grandchildren.