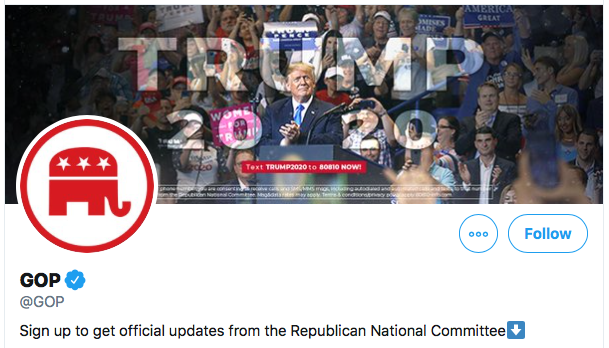 In a departure from past practice, the Republican National Committee no longer shares information about President Donald Trump's standing in states or Congressional districts with other Republican committees or candidates, ProPublica and the Texas Monthly reported today.

That could become a problem for down-ballot GOP candidates, especially the contenders hoping to flip three Democratic-held Congressional districts in Iowa.

The lengthy profile of Trump's 2020 campaign manager Brad Parscale by Peter Elkind with Doris Burke is primarily about Parscale's myth-making and "efforts to monetize his role in Trump’s victory" since 2016. But one passage sheds light on the influence Trump's campaign now exerts over the RNC, which is supposed to help elect Republicans at all levels.

[Parscale] has also spearheaded what appears to be the Trump campaign’s takeover of the RNC to the benefit of the president — and the seeming detriment of other Republican candidates. Other presidents have consolidated control over their party; similar criticisms were made of Barack Obama. But the extent of Trump’s takeover is unprecedented, according to experts. They say it inflicted damage on Republican congressional candidates in the 2018 elections, and could do so again in 2020.

One previously unreported example: Since Trump’s election in 2016, critical “voter scores” — sophisticated polling-based analytics that the RNC provides to party committees and candidates — have conspicuously omitted an essential detail for any down-ballot race: how voters in specific states and congressional districts feel about Trump. Republican insiders believe these analytics are being withheld to try and prevent GOP candidates from publicly distancing themselves from the president or leaking unfavorable results that embarrass Trump.

“They don’t want you to know if it isn’t good,” says former RNC chairman Michael Steele, a vocal Trump critic. “There’s a lot of data they’re sitting on that they’re not sharing.” Steele adds that today, “the RNC is not an independent actor; the RNC is now a part of the Trump campaign. The question now isn’t, ‘What do you need?’ The question is, ‘Do you support Donald Trump?’”

Greg Sargent wrote in his latest piece for the Washington Post,

To understand what this means, I spoke to Dan Sena, who ran the Democratic Congressional Campaign Committee’s 2018 recapture of the House. He said withholding such data would be unthinkable.

“The idea that you wouldn’t provide a blanket score about how people feel about the president is ridiculous, and really hamstrings how other campaigns will operate,” Sena told me, adding that this would deny candidates a crucial weapon in tough swing districts: “Anybody who is interested in moving swing voters has to have this kind of information.”

Sena said this info is crucial to how “modern” campaigns run targeted digital advertising in particular. “This information allows you to look for independents who like the candidate but have mixed feelings about the president,” he said. “These voters are going to be more persuadable.”

Sena opined that this omission of data was such glaring “malpractice” that it has to be “intentional,” adding: “They clearly don’t want anyone overperforming the president.”

A well-funded candidate like U.S. Senator Joni Ernst will be able to conduct plenty of internal polling next year. Ernst's campaign paid the Tarrance Group $45,875 for "survey research" in the second quarter of this year alone. It's standard practice for campaign-commissioned surveys to ask voters whether they approve of the president's job performance or have a favorable opinion of him. Nevertheless, Ernst's strategists would benefit from additional data the RNC has on Trump's standing in Iowa.

Other GOP campaigns may lack the resources to obtain high-quality analytics on a regular basis next year. Consider that:

Republican prospects for regaining the U.S. House already look shaky in light of Trump's historically low approval ratings. In a North Carolina Congressional district the president carried by 12 points in 2016, the GOP candidate won a September 10 special election by only 51 percent to 49 percent. By withholding important data from down-ballot candidates, the RNC could be digging a deeper hole for the party in Congress.