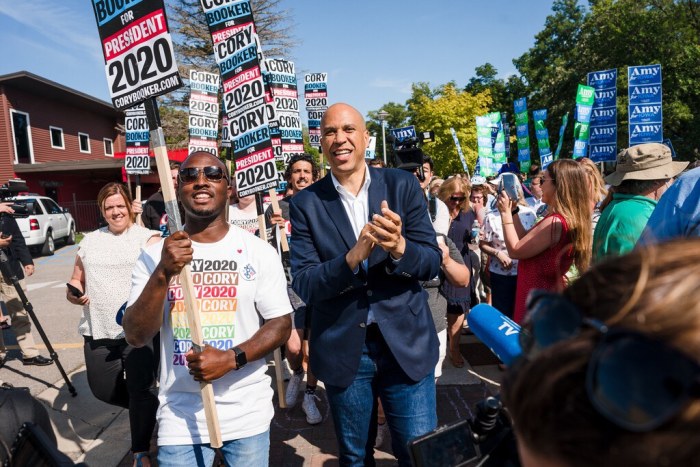 Why we need Cory Booker in this race

I first heard about Cory Booker in my political communications class in 2012. We watched a documentary about a young man, eager to change his community while battling a political machine. Looking back, Newark is a lot like Waterloo: a large minority population without a lot of opportunities for those minorities. Just last year, it was said that Waterloo is the worst place in America for African Americans.

It was difficult for me to get through that class and the rest of my classes, because I knew at the end of the semester I would be turning myself in to the Federal Bureau of Corrections.

I was born in 1987 in the blue collar town of Waterloo, Iowa. 1987 was a significant year because a few years before, we lost one of the four major employers in our town. To compensate for the loss, the drug trade replaced those jobs for many in the community. It was the beginning of the crack epidemic.

Growing up, my idols and role models were my older brothers and cousins, and they were drug dealers. They drove nice cars, wore nice clothes, and provided for me. I knew what they were doing was wrong, but I didn’t care about the consequences.

My mother was a Head Start teacher who was still in school working on her degree. While she was at school, I would be down hanging out on the block. As I got older, I felt like it was my turn to have my own block, so me and my friends set out to take over the neighborhood. One by one, we all ended up seeing the inside of a prison cell.

My senior year of high school, I got in trouble and ended up going to prison for two and a half years. When I got home, I was able to enroll in the Univerity of Northern Iowa and got good grades, but without any work history and a felony on my record, I wasn’t able to get a job. I was back where I started. In between being involved in student organizations and internships, I was still involved in “making plays” as we called it. Then, my senior year of college, I was arrested by federal agents.

I ended up doing four years in prison. It was a very difficult time for me. I left my children behind and broke my mother’s heart. I was sitting on my bunk one day when I heard someone calling my name. I walked out into the hallway and saw my hero, my idol, my older brother walking towards me. My older brother ended up becoming my cell mate, and I found out that he would be in prison well into his fifties, maybe sixties. I realized I couldn’t do that to my mother, couldn’t do that to my kids, and I couldn’t do it to myself. I had done more time locked up as an adult than I had free.

I’ve been home for two and a half years. I got my bachelor’s degree, worked on some campaigns, and now I have the privilege and honor to work for Cory Booker.

I’m working in politics because I want people who look like me and who have experienced what I’ve experienced to know that there are people in this system who want to help them. There is power in us turning out to the polls, and if we let our voices be heard, we can make the world a better place.

That’s also why I want to keep Cory Booker’s voice in this race.

Top photo of Ryan Stevenson with Cory Booker provided by the author and published with permission.