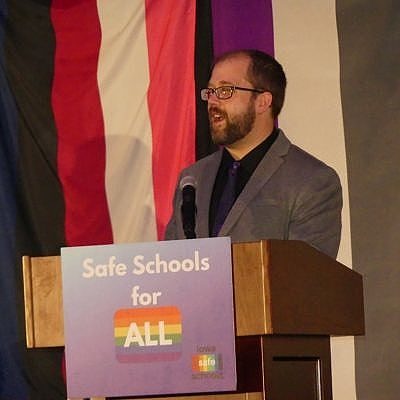 Nate Monson: “When Pete talks about his plans and vision for our country, I see four years of hope for a more united country where everyone can be part of the solution to our nation’s most urgent challenges.” -promoted by Laura Belin

Since 2007, I have served as the Executive Director for Iowa Safe Schools, one of the largest statewide LGBTQ organizations in the country. Our job is to create safe and supportive schools and communities for LGBTQ youth through education, advocacy, outreach, and direct services.

I believe every single candidate running on the Democratic side supports equality without question. But when I look at the 2020 field, only one candidate is working to build a culture of belonging in this country and that is Mayor Pete Buttigieg.

My top issue as a caucus-goer is whether a candidate makes LGBTQ youth feel safe. Feeling safe in the Trump era is a major concern I believe many LGBTQ people have. I’ve worked with students and parents who are victims of what is known as the Trump Effect, or bullying behavior that parrots the racist and hateful rhetoric of the president. As a queer individual, I have seen firsthand an uptick in being called slurs since the election of Donald Trump. Hate has become empowered and is seen as the norm, and LGBTQ youth do not feel safe or that they fully belong.

When Pete speaks, I don’t see four more years of division. When Pete talks about his plans and vision for our country, I see four years of hope for a more united country where everyone can be part of the solution to our nation’s most urgent challenges.

As someone who has worked for thirteen years for queer youth, I know that they are often left behind in the discussion around equality. Wedding cakes easily dominate the national conversation, while LGBTQ youth continue to face high rates of bullying, homelessness, and suicide risk.

A Buttigieg administration won’t leave our next generation feeling like they don’t belong. Pete is calling for a ban on conversion therapy, policies to support anti-bullying efforts, and real solutions on the homelessness epidemic facing LGBTQ youth. Pete is the only candidate asking for a mentoring initiative to support LGBTQ youth that will build the next generation of leaders we need.

A Buttigieg administration would also bring a teacher who cares about the well-being of youth into the East Wing. I’ve had a chance to spend a lot of time with Chasten Buttigieg, Pete’s husband. You can tell a lot about a person by who they spend their time with, and Chasten is the kindest, sweetest, and most caring spouse or politician I have ever met.

Beyond making me feel safe, I know that Pete is the best candidate to win. Many of my friends and family in my hometown of Algona were Barack Obama supporters who switched to Trump. And I’ve seen the way Pete is resonating with many folks like my parents and union members who are exhausted by the fighting in Washington. They are always bringing up how much they love Pete. They don’t want another D.C. insider or four more years of Trump. They want someone who is going to get things done for small towns and rural communities. They want someone who is comfortable talking about their faith, not as a litmus test, but as an authentic part of who they are as a person.

Pete is the best candidate to win these communities that we have lost as Democrats and create a path to taking back the majority in the Iowa legislature.

Pete has plans that can unite our country to tackle our most urgent challenges including healthcare, mental health, and empowering our rural communities. Electing Pete Buttigieg as president gives us an opportunity to end the reality show politics and work together to create a better future.

Pete Buttigieg will create a safe and united America where everyone knows that they belong, and that’s why I’m proud to be caucusing for him on February 3.

Top photo of Nate Monson provided by the author and published with permission.