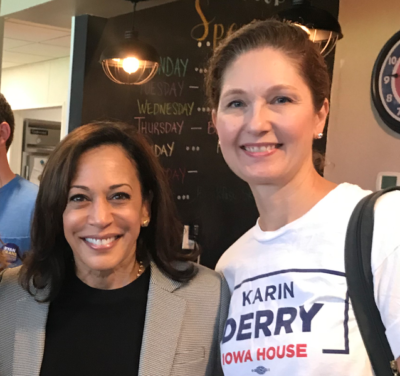 Warm, yet fierce: Why I am supporting Kamala Harris

“Be sure about your answer, sir.”

Senator Kamala Harris first got my attention at Brett Kavanaugh’s confirmation hearings. She was focused and prosecutorial. Her legal background was an obvious advantage. She can be simultaneously steely and smiling. Pressure doesn’t faze her—it empowers her. Wow, I thought, I hope she runs for president.

And here we are. While there is something to like (and even love) about most of the candidates, at the Polk County Steak Fry I was excited to commit to caucusing for Kamala.

The country has experienced a breakdown of social norms and threats to our democracy under the current president. Indeed, such breakdowns and threats often emanate directly from the president himself. We need a candidate who is not naïve, in any way, about what she or he is up against. Kamala is an expert at sparring and knows the legal landscape.

Kamala won’t play into Donald Trump’s hand. She is the only candidate for president with the strength and proven experience to prosecute the case against Trump. She’s taken on powerful interests – from the big banks to pharma companies to corporate polluters – and won. And she is committed and eager to take on one of the most important challenges in the country today: overturning the U.S. Supreme Court’s Citizens United decision.

While Kamala got a lot of people’s attention at the Kavanaugh hearings, she’s been a public servant for many years. As District Attorney of San Francisco and California’s Attorney General, she represented “The People.” She speaks about how the plaintiff named in such cases is not the victim herself or himself, but “The People.” That is because a crime against one of us is a crime against all of us. And that is why her campaign is Kamala Harris for the People—it’s a continuation of her ongoing service.

My 12-year-old daughter is a fan. She wanted to meet Kamala, had the chance, and then sat rapt through her town hall. This makes me think back to 2007, when my daughter was an infant and a certain candidate was slowly building support through Iowa. A month before the caucuses, Barack Obama was 18 points behind Hillary Clinton and plenty of people thought America wasn’t “ready” for him. Now, we hear the same question about Kamala. Are we ready for a woman, and a woman of color to boot? As Kamala points out, in every race she’s run, she’s faced that question–and won.

Then there are the issues. As Monica Potts wrote in a recent commentary about rural voters for the New York Times, “as long as Democrats make promises to make their lives better with things like free college and Medicare for all sound like they include government spending, these voters will turn to Trump again.” Government give-aways tend not to play well in middle America, whereas lower taxes and higher wages do. Kamala understands this. She supports very progressive policies, but frames them in a way that will bring in the votes in the general election.

I’ve had the chance to see Kamala speak in person a number of times, as well as chat with her personally. Each time my enthusiasm grows, as does my pride in supporting her. She is a special mixture of progressive and pragmatic, and I trust where she is taking us. Her confidence and optimism are inspiring. She can grill an opponent mercilessly but also have a warming heart-to-heart with a concerned kid.

When I see her engaging with people, when I see how people and crowds interact with her and respond to her messages, I get that feeling in my chest. Kamala’s the one I want to cheer for.

Top photo of Kamala Harris with Norene Kelly provided by the author and published with permission.