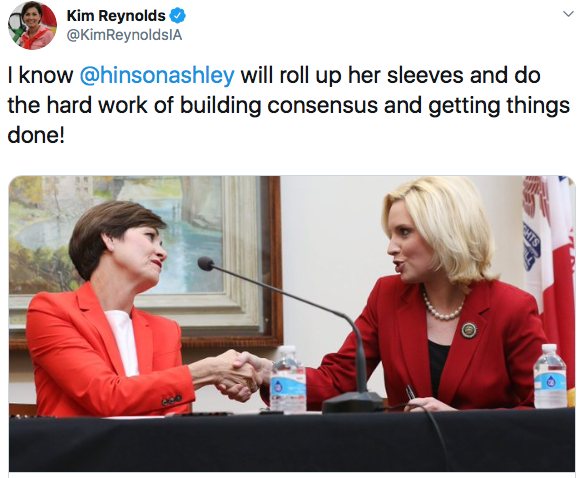 As James Q. Lynch was first to report in the Cedar Rapids Gazette, Reynolds and Gregg praised the work Hinson has done in the state legislature. Since 2017, she has represented Iowa House district 67, covering part of the Cedar Rapids suburbs. The governor tweeted about her support as well.

I know @hinsonashley will roll up her sleeves and do the hard work of building consensus and getting things done! https://t.co/TuI1Qb2mIb

Republicans began recruiting Hinson for this race soon after Democrat Abby Finkenauer defeated Blum last November. Hinson outperformed Blum in every precinct she represents and is the only Iowa House Republican to win re-election in a district both Hillary Clinton and Fred Hubbell carried. She also has ten years of experience as a reporter and anchor on the most-watched television station for news in the Cedar Rapids market, which covers fourteen of the twenty IA-01 counties.

The National Republican Congressional Committee previously gave Hinson their vote of confidence by adding her to their first batch of “on the radar” candidates in August.

At this writing, Hinson doesn’t have serious competition for the IA-01 nomination. One of the declared Republican candidates, Darren White, hasn’t reported any fundraising to the Federal Election Commission. The other, Thomas Hansen, reported $1,530.20 in contributions (about a third of which came from the candidate) during the third quarter and had only $538.56 cash on hand as of September 30.

Hinson’s latest FEC filing showed $317,967.40 in total contributions during the third quarter. That’s slightly below her intake during the previous quarter, but a solid number for a non-incumbent. Individuals donated $291,217.40, and ten corporate or conservative PACs gave a combined $26,750.00. A red flag for Hinson: she only collected $9,060.60 in unitemized donations during the latest reporting period, indicating relatively few small donors. Most of her larger donors have not yet maxed out, though, and could give again.

Hinson’s burn rate was fairly high. Her campaign spent $120,849.29 from July through September, with payroll, printing, and various forms of consulting as the biggest expenditures. Although she has plenty of cash on hand ($497,500.15) for a district-wide race, she is not keeping pace with the incumbent. That may not matter, however, as outside groups will pour millions into competitive House races like this one.

Finkenauer’s campaign reported $463,631.79 in total receipts during the third quarter, about 10 percent more than she raised during the previous quarter. Her total contributions from individuals ($287,057.34) was close to Hinson’s number, but Finkenauer raised much more from PACs ($172,250.00), as is typical for incumbents in battleground districts. The 80-some political committees that donated to the Democrat during the third quarter represent a wide range of corporations, industry advocacy groups, labor unions, and progressive organizations.

Finkenauer’s campaign reported $110,330.53 in operating expenses; the most costly items were for video production, digital consulting, databases, and staff salaries. The campaign also transferred $18,175 to the Democratic Congressional Campaign Committee. As of September 30, the campaign had $963,099.59 in the bank and $48,958.20 in debts and obligations, mostly win bonuses.

The Reynolds and Gregg endorsements may have been timed to discourage any other Republicans from joining the field in IA-01. New candidates often announce near the beginning of a fundraising quarter, and Blum has the ability to self-fund a campaign.

Having represented the district for two terms, he indicated earlier this year he hadn’t ruled out running for Congress again. Although Blum’s campaign reported no fundraising during the third quarter and only a few incidental expenditures, he spent $11,365 on polling in early 2019.

He’s still giving interviews on radio stations in northeast Iowa and appearing at events around the district. He’s been an outspoken defender of President Donald Trump and critic of Democratic steps toward impeachment.

Blum would likely have to put in a lot of his own money to match Hinson, since his campaign reported only $91,139.11 cash on hand as of September 30.

While establishment Republicans generally welcomed former Representative David Young’s comeback bid in IA-03, they would rather avoid a rematch between Blum and Finkenauer in a race most observers view as a toss-up. Blum’s constituent service and outreach wasn’t on Young’s level, and he had a tendency to explode when he perceived media coverage to be too critical.

Blum still feels aggrieved about the ethics investigation that hurt his 2018 re-election bid.

Laura – I didn’t list a $600 investment (which I wasn’t required to) and the Pelosi smear machine kicked into overdrive. Would you like to discuss the Clinton’s “pay to play” Foundation?

Last year, the nonpartisan Office of Congressional Ethics confirmed previously reported facts about Blum’s business dealings. The report asked the U.S. House Ethics Committee to further investigate possible violations of “federal law, House rules, and standards of conduct” and recommended that the House committee subpoena Blum and top associates, who refused to cooperate with the review. No such investigation happened, because Blum didn’t win a third term.

Any comments about the IA-01 race are welcome in this thread. According to the latest official figures, the twenty counties in the district contain 160,533 active registered Democrats, 139,005 Republicans, and 194,283 no-party voters.