The former executive director of the Polk County Democratic Party, Sharon had been ill for close to five years, with the last 18 months in a care facility. During that time, her husband devoted all his energy to taking care of Sharon and making sure she was comfortable. He retired from the Iowa Senate at the end of 2016 to continue those efforts.

On November 2, 2019, we lost the other half of the amazing duo: Dick Dearden, husband, father, grandfather, friend, and loyal outstanding Democrat.

I first got to know the Dearden family as a young Democrat in 1979. Their compassion, dedication, organizing abilities, and drive were impressive. On election day you wanted to stay out of their sight. Otherwise, they would have you door knocking until the polls closed. It was never about themselves - it was alway about electing someone else.

Every election day when I was the Polk County Auditor, I would receive a call from a disgruntled citizen with a disguised voice complaining about the election process. It didn’t take long to recognize it was Dick making the call. That became a tradition and served as my good luck call for the remainder of each election day.

Dick was elected to the Iowa Senate in 1994 and served in the legislature for 22 years.

I knew Dick as a kind, caring, and compassionate person. With him, it was not about always being politically correct, but rather doing what he believed was the best interest of others.

If I were to summarize Dick’s career, I would say he was everything you would want your elected official to be. He was a great friend to working people, a champion for organized labor, and a leader on environmental issues as chair of the Senate Natural Resources Committee.

The current Polk County Democratic chair Sean Bagniewski summed it up beautifully when he said Dick and Sharon helped make our county the Democratic powerhouse it is today.

I have the utmost respect for him because he served with so much dignity and dedication and never made it about himself.

I was honored to introduce him when he was inducted into the Iowa Federation of Labor Hall of Fame in 2015.

Dick and Sharon will be missed by our Democratic Party family.

Top image of Dick and Sharon Dearden provided by the author and published with permission, along with this photograph of Dick with his great-grandchildren Briar and Lilly Horn. Both pictures were taken in 2016, the last year Dearden served in the Iowa Senate. 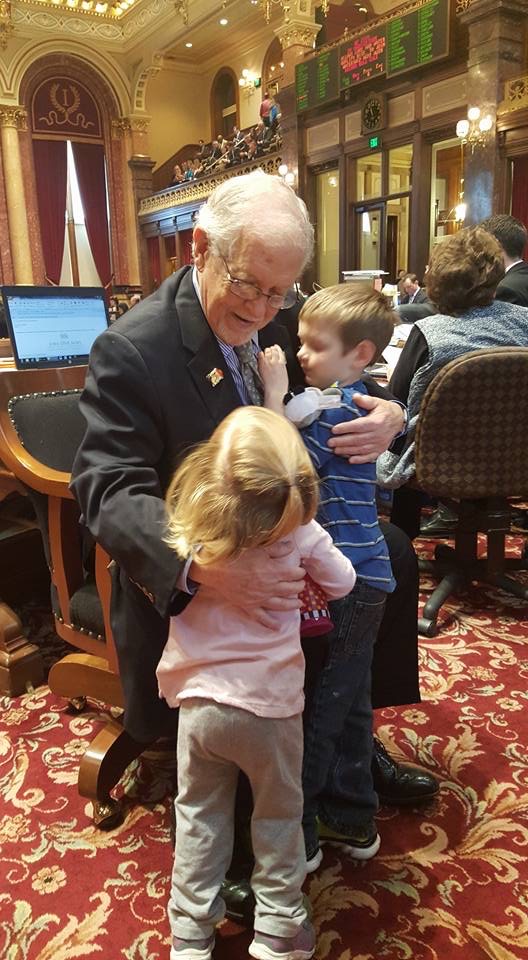