An Iowa Utilities Board rule intended to provide clarity for electric vehicle (EV) charging stations may face a legal challenge, bolstered by Republicans' action on an Iowa legislative committee this week.

WHY THE RULE IS NEEDED

The rule has been more than a year in the making. In July 2018, Iowa 80 Truckstops and Truckstops of Iowa asked the utility regulator to issue an order stating that EV charging may occur by the kilowatt-hour (kWh), a standard way of providing that service.

Iowa 80 Truckstops has been unable to install an EV charging station at the "world's largest truckstop" it operates in Walcott, because the tariff of its electricity provider Interstate Power and Light (a subsidiary of Alliant Energy) "precludes EV charging on kilowatt-hour basis."

Instead of granting the truckstops permission to charge by the kilowatt-hour, the Iowa Utilities Board embarked on a rulemaking process, recognizing that EV charging raised "significant legal and policy issues affecting the state as a whole."

All stakeholders agree that the developing market for EV charging requires a clear regulatory framework.

After receiving numerous written comments and hearing presentations at a workshop devoted to the issue, the utilities board expressed its intent in February “to remove EV charging stations from the definition of ‘public utility’" under Iowa law. Many more comments ensued, before and after the board modified its proposed rule in April. (All relevant documents can be found by searching for docket number "RMU-2018-0100" on the utilities board's website.)

An alliance of monopoly providers opposed the Iowa Utilities Board's approach. One would expect those in the business of selling electricity to support a clear legal framework for EVs, to help grow the market. Indeed, throughout the process the group of joint commenters--MidAmerican Energy, Interstate Power and Light, the Iowa Association of Municipal Utilities, and the Iowa Association of Electric Cooperatives--repeatedly expressed support for developing the state's EV infrastructure.

However, the utilities sought more restrictions on "behind-the-meter generation" by entities offering EV charging. They characterized their preferred language as a reasonable way to prevent others from producing electricity "in excess of their own needs in order to sell to the public in commercial transactions."

The impact would be to limit renewable energy investments by entities that want to offer EV charging to customers. As the Environmental Law & Policy Center and Iowa Environmental Council warned in a joint statement in March, "This language would prohibit ancillary charging services if those services were coupled with any on-site distributed resources."

Under the Joint Commenters’ and IPL’s proposed rule, the Hy-Vee in Urbandale that has charging stations under a few solar panels to draw in environmentally minded customers would be presumed to be a public utility even though that is a small amount of the store’s energy use and ancillary to the core business. The car dealership just off of the interstate in Ankeny that has charging stations for its electric vehicles under solar panels and allows use for customers/owners of electric vehicles would be presumed to be a public utility. The parking garage that has solar panels on its roof and four spots out of four hundred for electric vehicle charging would be presumed to be a public utility under this proposed rule. There are potentially countless other examples.

An alternate version of the rule, which the Iowa Utilities Board floated in July, incorporated language recently adopted by Kentucky's utilities regulator. That phrasing would have made more clear that EV charging stations are permitted to have "behind-the-meter generation" such as solar panels. The utility commenters strongly opposed that language.

It's worth noting that Republican Governor Terry Branstad appointed all three current utilities board members. Governor Kim Reynolds has reappointed two of them.

REPUBLICAN LAWMAKERS TO THE RESCUE

The legislature's Administrative Rules Review Committee (ARRC) meets monthly to consider proposed changes to state government regulations. Ten lawmakers serve on the panel, three from the majority party and two from the minority in each legislative chamber. They approve the vast majority of agency rules without controversy.

However, legislators may object to a rule if at least six committee members agree. The objection does not stop the rule from going into effect, but changes the presumption if a stakeholder files suit to block the regulation. Normally, courts presume government administrative rules are valid unless litigants prove otherwise. Once the ARRC has objected, the state agency has the burden to establish in court that the rule "is not unreasonable, arbitrary, capricious, or otherwise beyond the authority delegated to it.”

At its November 12 meeting, the rules review committee moved quickly through dozens of items on its agenda. In contrast, the EV charging rule prompted nearly an hour and a half of discussion, including public comments and questions from legislators. Consumer Advocate Mark Schuling, Pam Mackey-Taylor of the Sierra Club, and Josh Mandelbaum of the Environmental Law & Policy Center were among speakers who praised the rule's "balanced" approach.

Representing Iowa 80 Truckstop, Bob Rafferty also encouraged legislators to approve the rule as a "starting line for EV charging in Iowa." Equipment that can mostly charge a vehicle in about an hour costs more than $100,000 to install. Prohibiting a company from selling EV charging by the kilowatt-hour would be like banning sales of gasoline by the gallon, Rafferty argued. Consumers would have no idea what they are getting for their money and wouldn't be able to compare prices at competing charging stations.

Rafferty added that 28 states have resolved the same issue either through legislation or a utility board's rules. All have determined "that EV charging should not be regulated like a utility." So Iowa would be an "outlier" if it took the stance the utilities were advocating, creating a "government-controlled market."

Opponents of the rule led with representatives of municipal utilities, who may present a more sympathetic face than investor-owned, for-profit utilities. Don Kom, director of electric services for the city of Ames, and Tim Whipple, in-house general counsel for the Iowa Association of Municipal Utilities, asserted that they are not trying to undermine EV charging or prevent a business from putting up a few solar panels. Rather, they want to guarantee future electricity sales from a site, in order to recover the significant costs of installing a fast EV charger, with associated transformers and transmission lines.

MidAmerican's attorney was one of the last public commenters at the rules review committee meeting. Counsel representing Alliant/Interstate Power and Light did not speak, which may have been a tactful choice, since that company has faced sharp criticism in its service area lately for requesting a huge gas and electric rate hike.

Matt Oetker, Agency Rules Administrator for the utilities board, emphasized that board members thoroughly examined points raised by the utility commenters. They opted for an interpretation consistent with practice in other states.

To all appearances, no amount of discussion could have dissuaded Republican lawmakers from siding with opponents. They had a detailed objection to the EV charging rule printed before the meeting. The document reads as if it were drafted by attorneys for the utilities and tracks closely with arguments those commenters made during the rulemaking process. 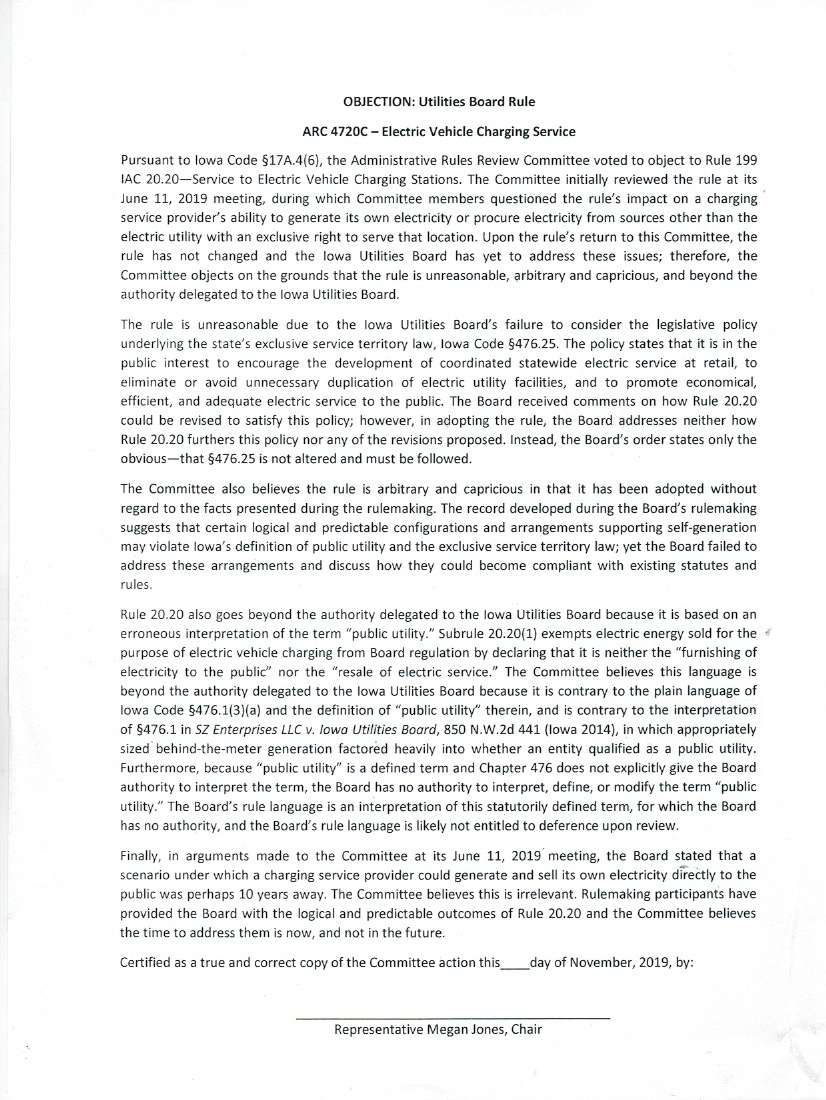 The committee's six Republicans--State Representatives Megan Jones (co-chair), Steven Holt, and Joe Mitchell, and State Senators Waylon Brown (co-chair), Mark Costello, and Zach Whiting--approved the objection with no amendment. None responded to Bleeding Heartland's inquiries about their reasoning or who drafted the document.

Democratic State Senators Pam Jochum and Rob Hogg and State Representative Rick Olson supported the utilities board rule by voting against the objection. The other Democratic ARRC member from the Iowa House, Amy Nielsen, abstained from the vote, citing an unspecified conflict of interest.

That no Democrats joined the GOP effort is significant, because with seven votes, the ARRC could have delayed the EV charging rule from taking effect until after the 2020 legislative session.

Although the rule will take effect on November 27, the legislators' objection adds a layer of uncertainty, which will likely discourage Iowa businesses from installing EV charging stations.

Speaking for the municipal utilities association, Whipple told Bleeding Heartland during a November 13 telephone interview that "we've not made a determination" on further legal action to get the rule amended or struck down in court. Utilities will decide later on next steps, whether that is petitioning the board for changes or filing a lawsuit.

Whipple declined to comment on who drafted the objection Republican lawmakers presented at the ARRC meeting. He emphasized that his organization wants "regulatory clarity" on EV charging. "We do want to see an electrified transportation system." On the other hand, "stranded investments pose a big risk" to small, nonprofit community utilities. If they are not able to recover the costs, all the other ratepayers in the town would "be left holding the bag."

Coupled with the punitive tax and fee legislation passed by the legislature in 2019, the message Iowa is sending here is a policy preference biased against EVs. It is perplexing that the utilities would want to be a part of that given all they have to gain from selling more electricity for EV charging. If this industry is finally allowed an open, transparent market in Iowa – as this proposed rule would create – the utilities stand to gain a lot. Instead, it appears they are trying to undermine the legitimacy of this rule and create uncertainty for the industry. I am very concerned that this level of regulatory uncertainty will severely limit investment in EV infrastructure in Iowa.

The "punitive tax and fee legislation" refers to a law that took effect in July. It increased registration fees for electric vehicles and applied new excise taxes on hydrogen used as fuel and electricity used as fuel for vehicles.

Iowa utilities continue their relentless attack on their customers’ use of solar energy. This is a perfect example of the utilities’ misguided efforts to attack solar. The utilities asked legislators to object to a rule that provides clarity to allow for the expansion of EV charging infrastructure – something the utilities claim to agree with and support. The utilities grounds for objection is based on the fact that the rule did not take the additional step of prohibiting customer generation. The utilities should focus on clean energy solutions such as expanding EV infrastructure and not misguided efforts to limit their customers’ ability to use solar.

Sometimes a state agency will amend a rule following an ARRC objection, hoping to avoid lengthy litigation. The Iowa Utilities Board had no comment on how it may respond to the committee's action.