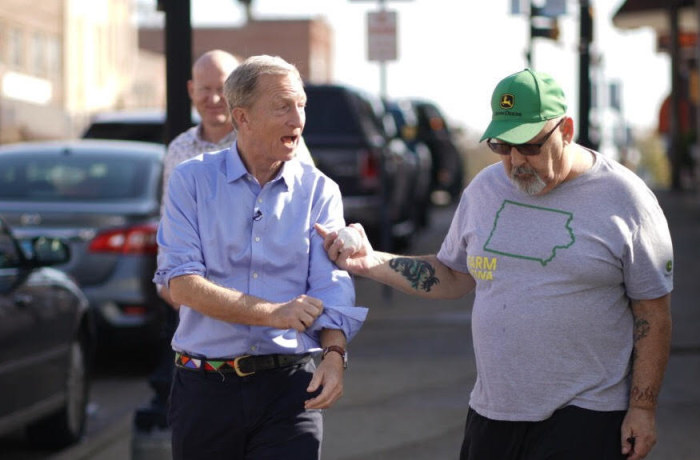 “YOU WANT BOLD CHANGE? YOU NEED NEW AND DIFFERENT PEOPLE”

“First of all, I know that can be true,” Steyer acknowledged. “My argument is, you want bold change? You need new and different people.” He points to the example of Nevada. “They have a majority female legislature that they would never have without term limits.” More broadly,

I’m looking at what I think is a broken government. And every time someone says, “Well, I don’t like the changes you’re having,” I’m sort of like, “I think this is an important change, and I think it really works. But the contrast is something that definitely doesn’t work.

In Steyer’s experience, term limits are important because that’s “really how you change leadership. You can get leadership that is there for a really long time and is really toxic. I would argue that’s happened.”

But as an Iowan, I wish I could keep voting for Senator Tom Harkin. He retired, and now we have Senator Joni Ernst. Why shouldn’t I be able to keep re-electing Harkin?

“Because I think there’s a dramatic incumbency bias, that you really develop these long-term symbiotic relationships, and it ends up being very bad for the overall workings of the legislature. And that’s actually what’s happened.”

Senator Bernie Sanders is a long-serving incumbent, and he’s for bold, progressive change. Is that not possible?

“Look, I think you are always going to be fairly able to point to individual legislators who you like and who have been in for a long time and have done a good job. I agree with you. But I think overall you can look at the system and say it’s failed.”

California used to have term limits that were changed when enough people concluded the limits were too short. But the policy has been “really helpful” in that state, Steyer argued.

“We have term limits for the president, and I’m very grateful for it.”

Speaking of California, do you feel the direct democracy/ballot initiative culture has served the state well?

“I do. I know that people outside the state don’t see it the way that people in California see it. But I can tell you that the way it gets reported on is very inaccurate.”

Steyer acknowledged some mistakes have been made in past ballot initiatives, but now Californians are “pretty damn good at props.” For context, he noted,

California as a government was bankrupt and failed ten years ago, literally, and probably for ten years before that. And we would not be solvent, we would not have an operating government in the state of California without propositions. Period. All of the money, all of the revenue-generating changes in California politics have gone through the ballot.

But haven’t there been some contradictory policies? Prop 13 (passed in 1978) said you can’t raise property taxes, but then people want more money spent on education.

Steyer wouldn’t call it contradictory. Some “bad” things passed, and Prop 13 was one of them. A new initiative on the 2020 ballot would undo part of Prop 13, and Steyer thinks it has a chance of passing.

The bottom line is, “You cannot get revenue increases through the legislature of the state of California. Full stop.” In contrast, he ticked off several examples of those policies passing through a popular vote. Prop 30 raised income taxes for higher earners in 2012. Prop 39, for which Steyer was a leading proponent, closed a tax loophole the same year.

California voters approved a $2 per pack tax increase on cigarettes in 2016. Advocates had tried to get that enacted for around 20 years, Steyer told me. The policy generates an additional $3.4 billion a year to the Medi-Cal program for low-income children and adults. “Never could have gotten it through the legislature.”

The only revenue increase the California legislature approved lately was a 25 cent per gallon gasoline tax. Republicans successfully recalled a state senator after that, so “They’re never doing it again.”

Last year, Steyer and others “worked really hard” on a bill to address water pollution, a major problem in California’s Central Valley. The legislation would have created an optional fee of ten cents per month on water bills–“otherwise known as one dollar and twenty cents per year. Optional. Legislature wouldn’t pass it.”

Do you envision that in a national referendum system it would be easier to get revenue increases passed?

“Look, I think what I’ve been talking about is not about revenues. But when you said to me, isn’t it true that the system doesn’t really work in California? And I said to you, actually, California wouldn’t work without the system. And that’s the truth.”

Imagining a national campaign for some kind of ballot initiative, wouldn’t the big-money groups dominate the national discourse? Who could afford to run a 50-state campaign on anything, whether it be guns, reproductive rights, or other issues?

Steyer believes groups like Moms Demand Action could wage an effective 50-state campaign on a gun-related ballot initiative, limiting the scope of the Second Amendment.

Do you envision that would be narrowly-tailored, like establishing universal background checks, or more broadly altering the text of the Second Amendment?

“As someone who’s drafted and passed propositions, it’s really important to draft it carefully,” Steyer said.

Very, very, very important. Correctly citizens are scared about passing stupid legislation, so that you have to be really careful about what you’re doing. Because you know that it’s going to get picked apart by big-money interests. You know that.

Advocates with experience in fighting for propositions understand the need for diligent planning. “There’s a reason that we’ve passed this stuff,” Steyer added. “We need to make sure that this is bullet-proof,” since the other will raise doubts about your motives.

For instance, “Liberals in California are trying to tell you how to live your life.”

That could be a easy campaign that might work all over the South and Midwest.

“If it were true,” Steyer countered. Before you put a ballot initiative out there, you have to think through what the other side would say and how you would respond during a national campaign.

He’s not deterred by that prospect. “I’m starting from a thesis that we have a broken government. So it’s like, there’s a low hurdle to cross.”

Steyer believes ballot initiatives change the nature of “how people think about government. It really does. Because obviously, you are participating in government, right?” When people become more involved, “it’s actually a democracy.”

In his stump speeches and advertising, Steyer has emphasized that he supported impeaching President Donald Trump from the beginning. During our interview, I read out the text from a typical online ad by way of example. 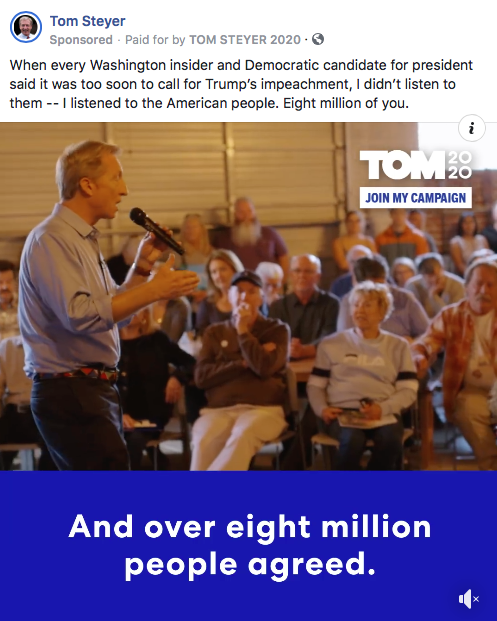 Isn’t that basically the Republican talking point against impeachment, that Democrats were always looking for a pretext to get rid of Trump, ever since 2016, and this isn’t really about law-breaking or obstruction or abuse of power? That’s what Senators Joni Ernst and Chuck Grassley say whenever it comes up (see here and here).

He’s a career criminal. He started breaking the law he day he came into office. He obstructed justice in plain sight. He was taking money from foreign governments from day one. He is a career criminal, and he has continued to break the law every single day.

So, bringing up the fact that he was breaking the law from day one–yeah. Was it obvious? Mm-hm. We said, look, this is incredibly obvious.

Does it concern you that there will probably be 8 million Republicans in favor of impeaching the next Democratic president from day one, regardless of the circumstances? Should popular support for impeachment be a determining factor for whether people pursue impeachment?

“It is a critical factor,” Steyer said. He recalled that public support for impeaching President Bill Clinton was really low, perhaps 29 percent of Americans. That was “100 percent a relevant factor” in how those proceedings turned out.

Although “Republicans will say anything at this point to try and protect this president, I don’t think there’s any question that he’s a career criminal, and it was obvious. Absolutely obvious.”

Steyer recommended Amy Siskind’s book The List: A Week-by-Week Reckoning of Trump’s First Year. Siskind chronicled Trump’s misconduct and authoritarian impulses. “When you read it, you’re like, oh my goodness. That is crazy,” Steyer said. Every day there’s something, starting before Trump was inaugurated. “From day one, he’s been taking money from foreign governments. He’s a crook.”

Steyer also finds it “amusing to see that his defense against obstruction of justice is to obstruct justice and to not allow anyone to testify.”

Republicans may argue that Trump’s conduct isn’t impeachable, but in Steyer’s mind, “this is not a close call,” and “there’s 180 things he’s done. He is a career criminal.” He has told Democrats from the beginning of Trump’s presidency, “You guys keep treating this guy like a politician. You do not understand this man. You deeply do not understand who he is. He’s a criminal, and his behavior is criminal.”

“THIS IS GOING TO BE A GENERATIONAL ELECTION”

Signs point to a high turnout next year.

Steyer agreed. “My thesis has always been, as a grassroots person, we don’t win as Democrats by convincing moderate Republicans that we’re just like Republicans, only nicer. We win by getting the 50 percent of American who think the system doesn’t work–but who agree with us on everything!–to vote.”

In terms of generating turnout, phone banking seems to be less effective, with people screening calls. With many people working different shifts, it’s hard to catch people at the door. How do you think voter mobilization efforts will change?

Steyer pointed to NextGen America’s vast experience working in many states. “So we’ve done all these things. So we can answer that question not based on what we think, but what’s actually worked.”

Still, “the closer you get to a person to person conversation,” the better, Steyer said. Moreover, door knocking is more effective if the canvasser is local and knows the area. “People are very skeptical about political people showing up from the outside, and rightfully so. People are not stupid.”

You think you’re a candidate who could drive historic turnout at the top of the ticket?

“I do. Look, I think we’re going to have this turnout, period.” The question is trust: “Do you think the person understands the problems that are affecting me and my family.” Can you trust the candidate to work hard and fight for solutions.

When you said “we’re going to have the turnout, period,” do you mean because the election will basically be a referendum on Trump?

Looking at the 2018 results, Steyer sees higher Democratic turnout compared to 2014 as the key. More Republicans voted too, “but it didn’t matter, because Democrats actually showed up.”

This year’s November election victories in Virginia, Kentucky, and Louisiana also can be chalked up to Democratic turnout. That element is a huge part of “how this whole thing is going to work” across the country.