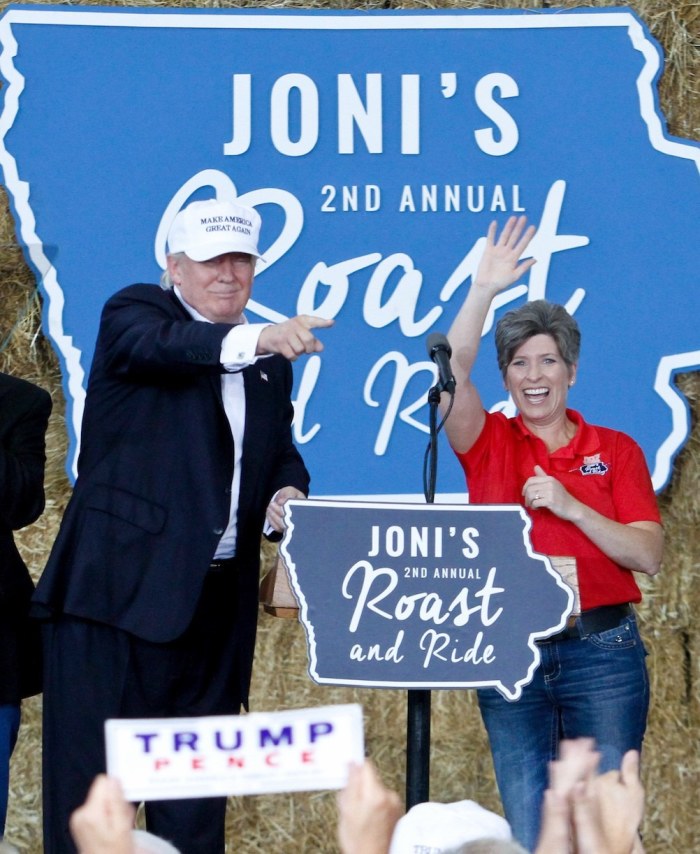 How vulnerable are Donald Trump and Joni Ernst in Iowa?

A new poll commissioned by a Democratic-aligned political action committee suggests President Donald Trump and U.S. Senator Joni Ernst are vulnerable in Iowa, which voted for Trump by more than 9 points in 2016 and last turned out a sitting U.S. senator in 1984.

How worried should these Republican incumbents be?

TOPLINES FROM THE NEW POLL

Public Policy Polling surveyed 944 Iowa voters between December 13 and 15 (margin of error plus or minus 3.2 percent) for the End Citizens United PAC. You can find the full questionnaire and cross-tabs here.

The respondents said they voted for Trump over Hillary Clinton in 2016 by 48 percent to 41 percent. But only 47 percent said they now have a favorable opinion of the president, while 51 percent had an unfavorable opinion. If the presidential election were today, they would support an unnamed Democratic candidate over Trump by 49 percent to 47 percent.

Whether a named Democratic opponent would do better or worse against Trump is impossible to guess from this survey. But it's notable that Trump's re-elect number was below 50 percent, a danger sign for an incumbent. While some national or state polls have found Trump's re-elect number lags behind his approval or favorable numbers, PPP measured both at 47 percent for Iowa voters.

Trump barely exceeded a 50 percent vote share in Iowa last time around. He beat Clinton by a wide margin here because a much larger than usual number of voters selected a third-party candidate. Support in the high 40s may or may not be enough to win our electoral votes in 2020, depending on whether Iowans who dislike Trump consolidate around the Democratic nominee.

Ernst's rating was barely above water in the PPP survey (45 percent favorable, 43 percent unfavorable). If the U.S. Senate election were held today, 47 percent of respondents would support the Republican incumbent, 41 percent would vote for Democrat Theresa Greenfield, and 12 percent were not sure. End Citizens United endorsed Greenfield in July, so PPP did not test other Democratic challengers against Ernst.

A statement from End Citizens United hailed signs of a "devastating blow to Ernst's standing." But it's never wise to draw sweeping conclusions from one poll.

Ten or fifteen years ago, some media organizations frequently commissioned surveys to measure the job approval of leading Iowa politicians. Unfortunately, such information is now hard to come by for those without access to internal polling by Iowa campaigns or political advocacy groups.

Some Republicans immediately discount all PPP findings, because the firm primarily works for Democratic candidates and progressive organizations. However, FiveThirtyEight's pollster ratings give the firm a "B" rating, better than most firms that conduct telephone polls with robocalls. (The top-rated pollsters generally use live interviewers.)

One of those top-rated pollsters is J. Ann Selzer. But Selzer & Co's most recent Iowa poll for the Des Moines Register, CNN, and Mediacom tested the popularity of Trump, Ernst, and other leading GOP figures only among Republican respondents, not among a sample drawn from the full political spectrum. A broader Selzer poll of Iowa adults from February 2019 found Trump's approval rating was 46 percent, with 50 percent disapproving--very close to the latest PPP numbers.

In January 2018, Selzer found Trump's job approval at 44 percent among Iowa adults, while 51 percent disapproved. At that time, Ernst's approval rating was 51 percent, solidly above her 33 percent disapproval. In February 2019, Selzer measured Ernst's best numbers yet: job approval of 57 percent/30 percent, favorability of 56 percent/29 percent. The senator received widespread and sympathetic media coverage in the weeks prior to that survey, with many news organizations reporting personal details from legal documents filed in her divorce.

Morning Consult has surveys in the field in all 50 states almost continuously and reports results on a quarterly basis. Their data suggest Trump and Ernst are even less popular in Iowa than PPP's findings indicate. According to Morning Consult numbers, Ernst was the country's fourth most unpopular senator during the third quarter of 2019 (39 percent approve/43 percent disapprove).

If you believe Morning Consult, Trump's approval has been underwater in Iowa since the summer of 2017. His approval number in this state was 42 percent in September, October, and November 2019, while disapproval was either 54 or 55 percent.

Whether or not you find PPP's numbers credible, they are not an outlier compared to the limited available data.

DID QUESTION WORDING SKEW THE RESULTS?

Reacting to the PPP findings, Republican Party of Iowa spokesperson Aaron Britt denounced what he called a "bogus partisan push poll," James Q. Lynch reported for the Cedar Rapids Gazette on December 18. That article failed to explain the difference between message testing and push polls.

Many legitimate polls test the impact of positive or negative statements on voters' support for a candidate. Britt's hyperventilating notwithstanding, Iowa Republicans routinely test unflattering messages about Democratic candidates, and the results inform GOP-funded direct mail and paid advertising.

In contrast, a "push poll" is "political telemarketing masquerading as a poll." No one records or analyzes responses. The calls exist solely to spread negative information to many thousands of people, not a representative sample of the electorate.

PPP's survey for End Citizens United was clearly a message-testing survey. The respondent pool (35 percent Democrats, 35 percent Republicans, 30 percent independents) was similar to the make-up of the Iowa electorate. Still, it's fair to ask whether the wording was so tendentious as to skew the results.

The ballot test in the fifth question was straightforward: "If the election for US Senate were held today, and the candidates were Democrat Theresa Greenfield, and Republican Joni Ernst, who would you vote for?"

Next, respondents heard a question that primed them to think about the influence of campaign contributions on members of Congress.

How often do you think politicians in Washington promote policies because they help corporate special interest groups who support or donate to their campaigns: most of the time, sometimes, rarely, or never?

The next question summarized a wide-ranging election reform bill that has stalled in the Senate.

This year the House of Representatives passed HR1 - the biggest anti-corruption bill in history that will crack down on corruption in both parties. Mitch McConnell and Joni Ernst have refused to allow a fair up or down vote on the bill, which prevents politicians from profiting off their offices by strengthening ethics laws and lobbying rules, limiting the influence of wealthy donors, and stopping secret corporate money from boosting their campaigns. Do you support or oppose HR1?

After hearing that question, 51 percent of respondents said they supported the Democratic bill, 15 percent opposed it, and 34 percent were unsure.

The hammer came down in question 8.

A recent AP investigation caught Republican Senator Joni Ernst arranging for $50,000 in dark money to benefit her campaign, breaking anti-corruption laws. The dark money group paid for ads to cover up Ernst’s votes that rewarded her donors by raising Iowans' healthcare costs. Ernst also took prohibited money and was charged with the largest federal election fine an Iowa politician has ever paid. Senator Ernst promised she would stand up to special interests, but instead she’s been collecting their money and putting their interests ahead of Iowans. Having heard this, let me ask you again: If the election for US Senate were held today, and the candidates were Democrat Theresa Greenfield, and Republican Joni Ernst, who would you vote for?

The first sentence alludes to reporting by Brian Slodysko of the Associated Press, who identified several signs that Ernst's campaign has illegally coordinated with Iowa Values, a group that does not disclose its donors. His article described "a degree of overlap that potentially violates the law" and facts that some campaign finance experts viewed as a violation (see also here). The "largest federal election fine an Iowa politician has ever paid" stemmed from some "excessive and prohibited contributions" to Ernst's 2014 Senate campaign, Elizabeth Meyer reported last week for Iowa Starting Line.

Obviously Republicans will take issue with the characterization of Ernst's votes on health care and allegiance to "special interests." But she has repeatedly voted for bills that would repeal the Affordable Care Act, raising costs and endangering coverage for many people with pre-existing conditions.

Whether or not you find the question wording unfair, it's indisputable that Iowa voters will hear such messages frequently before November 2020. Outside groups spent more than $60 million on Iowa's U.S. Senate race in 2014, and political advocacy organizations will likely spend many millions over the next eleven months to sway Iowans' views about Ernst and her eventual Democratic opponent. That's the reality of competitive Congressional elections.

By the same token, Iowa voters will be exposed to millions of dollars in advertising that bashes the Democratic nominee for Senate. The PPP survey can't tell us whether those claims will resonate more than potential hits on Ernst.

Many other unknowns could affect the standing of Ernst and Trump in Iowa between now and next November, such as trade talks with China, a Senate impeachment trial, and who wins the Democratic presidential nomination. While signs point to a high-turnout general election, with great enthusiasm among both party bases, it's too early to know whether Republicans or Democrats will have the wind at their backs in Iowa next fall.

For now, I still consider GOP candidates slightly favored in the presidential and Senate races. That view is subject to change as more snapshots of the Iowa electorate emerge from public polls.

Top photo of Donald Trump with Senator Joni Ernst at her "Roast and Ride" fundraiser in 2016 posted on Ernst's Facebook page.