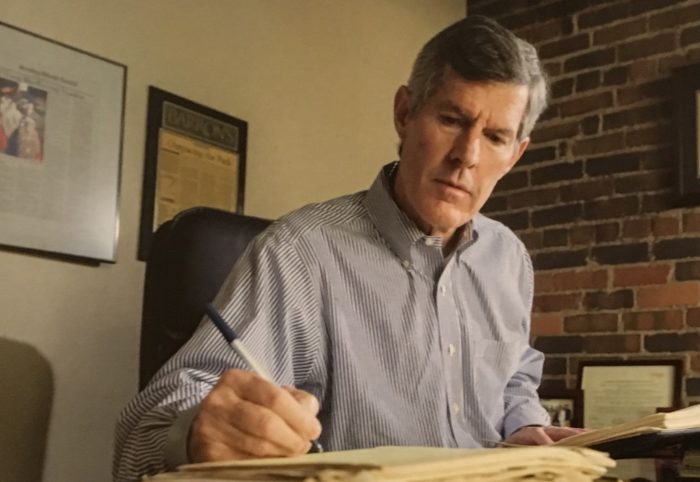 Are Iowa Democrats more impressed by Fred Hubbell’s work in business and government, or by his long history as a donor and community leader? How bothered are they by criticism of Hubbell’s stances on labor issues, or by hearing that he is a wealthy former corporate executive? Are they reassured after learning more about his beliefs, philanthropy, treatment of employees, or commitment to creating jobs in Iowa?

Whereas the Hubbell campaign’s first message-testing poll last August focused on voters’ priorities and reasons to support the candidate, a lengthy survey in the field this week explores potentially damaging cases against the candidate as well as points in his favor.

A Bleeding Heartland reader recorded the nearly 20-minute call and shared the sound file. Follow me after the jump for the full questionnaire, which did not include any positive or negative statements about other candidates for governor.

The poll began with a series of standard questions to confirm that the respondent was at least 18 years old, registered to vote, and likely to vote in the Democratic primary.

The caller then asked for the respondent’s second choice.

Next, I’m going to read you a list of different ways you may have heard or read something about the candidates for governor. After each, please tell me whether you have seen or received any information about that candidate for governor in that way.

What specifically do you recall seeing or hearing about gubernatorial candidate Fred Hubbell? (open-ended question)

Now I’m going to read you a list of words or phrases that some people use to describe political figures. After each, please tell me whether you believe the statement describes Fred Hubbell very well, somewhat well, not too well, or not well at all.

Next, I’m going to read you two more statements about potential Democratic candidates for governor. Please tell me which candidate you prefer.

Next, I’m going to read you some information that critics of gubernatorial candidate Fred Hubbell might say about him. After, please tell me whether the statement raises very serious doubts, serious doubts, minor doubts, or no real doubts for you about Fred Hubbell.

Fred Hubbell is a corporate CEO who is anti-labor union. He supports right-to-work laws that weaken unions and prevent workers from unionizing, and recently even called labor unions “corrupt.”

Now, I’m going to read a response to the information you just heard about Fred Hubbell and get your reaction. After, please tell me whether you find Fred Hubbell’s response on this issue very convincing, somewhat convincing, not too convincing, or not at all convincing.

Fred is a strong supporter of workers’ rights and collective bargaining, and strongly opposes the Republicans’ attack on unions. But he says the status quo isn’t working, and we need to work to root out corruption in all parts of the political system. As a businessman, Fred has learned that there are those at the top who take advantage of everyone else. As governor, Fred won’t take a salary, won’t be beholden to anyone, and will only look out for the people of Iowa.

Fred Hubbell was a corporate Wall Street lawyer and was even quoted saying, “I know about hard work. I used to be a Wall Street lawyer, and those people work hard.” He is out of touch and is worth millions of dollars and does not understand what life is like for most working Iowa families. Does it raise very serious doubts, raise doubts, minor doubts, or no real doubts about Hubbell from the critic?

Response: Fred Hubbell briefly worked on Wall Street before he returned to Iowa to raise his family, grow the business his family started, and create good jobs in Iowa. He tried to live by his father’s motto: to [those whom] much is given, much is expected. For decades, he’s personally donated his own money and time to support Planned Parenthood, to fund mental health services, and create college scholarships. His values are Iowa, not Wall Street. Is this very convincing, somewhat convincing, not too convincing, or not at all convincing?

Fred Hubbell is a former corporate executive worth hundreds of millions of dollars who has no idea what real people go through to make ends meet. When Hubbell ran Younkers, he put profits over his employees and customers, slashing his employees’ benefits and laying off workers while taking massive bonuses. Now he is spending millions trying to deceive voters about his record to buy the governor’s seat. The last thing Iowa needs is a rich corporate executive as governor. Does it raise very serious doubts, serious doubts, minor doubts, or no real doubts?

People who have worked for Fred call him the best boss they ever had. Fred truly cared about his employees and their families and invested in their personal growth and advancement in the company. And when employees had personal and family emergencies, they had the comfort of knowing their jobs would still be there after time away. Hubbell’s companies have received numerous awards for their ethics, philanthropy, and for being a good place to work. Does this response sound very convincing, somewhat convincing, not too convincing, or not at all convincing?

Now that you have heard more information, if the Democratic primary election for governor were held today, and the candidates were Andy McGuire, Cathy Glasson, John Norris, Ross Wilburn, Jon Neiderbach, Fred Hubbell, and Nate Boulton, who would you vote for? (if undecided, ask how the respondent is leaning)

Regardless of how you are voting, what concerns you most about Fred Hubbell? (open-ended question)

Next, I’m going to read you a list of some of the responses you’ve heard to the attacks made on Fred Hubbell. Please tell me which stands out and makes you feel most favorably about Fred Hubbell.

• he was the caring boss who provided his employees with good benefits, pay, and opportunities for growth
• his companies received awards for ethics, philanthropy, and being a good place to work
• he has donated millions of his own money to support causes like women’s health, mental health funding, and education
• when he sold his business, he insisted the company add jobs in Iowa
• he was a labor union member and will fight to restore collective bargaining rights

Now that you have heard more information, thinking back to the critique of Fred Hubbell, does that criticism raise very serious doubts, serious doubts, minor doubts, or no real doubts for you about Hubbell?

The poll concluded with a standard set of demographic questions:

• year of birth
• liberal, moderate, or conservative (very or somewhat)
• last year of education completed
• employment status: working full-time, employed part-time and would like a full-time job, employed part-time and would not like a full-time job, unemployed and would like a job, retired, student, stay at home parent/homemaker
• what best describes your work or work you most recently did: white-collar job such as office worker, blue-collar job such as factory or agriculture, service industry job such as a restaurant or retail store
• did you participate in the 2016 Democratic presidential caucuses
• which candidate did you caucus for in 2016: Bernie Sanders, Hillary Clinton, Martin O’Malley
• first name and phone number, for verification purposes

Some context underlying these poll questions: Attorney General Tom Miller has not endorsed any candidate for governor; former Lieutenant Governors Judge and Pederson are both backing Hubbell. The favorability questions near the beginning are designed to indicate whether it would be helpful to make their preferences more widely known to likely Democratic primary voters.

Supporters of competitors more closely aligned with labor unions have been pushing a narrative about Hubbell’s alleged hostility to organized labor. A January 31 article in the Daily Iowan fueled such criticism, because of this passage.

Fred Hubbell, a Democratic candidate for governor and a retired insurance executive from Equitable Life Insurance Company of Iowa, said large corporations are not harmful single-handedly; they have to be run by the wrong person to negatively affect smaller businesses.

Hubbell emphasized that each side of the spectrum, from CEOs to labor unions, can be at fault or can work for the “better good.”

Hubbell posted this statement defending his labor record on his campaign’s Facebook page on February 1.

I strongly support labor unions and the hardworking men and women in the labor movement. I was a proud member of a labor union myself, and my daughter and her husband are both union members. Labor unions have been an engine for tremendous progress in our country and in our state, fighting tirelessly to ensure hardworking Iowans receive good wages and fair working conditions.

Earlier last year, my wife and I were considering how we could best serve Iowa during these troubling times of gross mismanagement and unsteadiness. There are a lot of reasons why I chose to run for Governor, but it was when I saw what the Republican legislature did to collective bargaining rights that I finally decided to toss my hat into the ring. What happened to Chapter 20 was politically motivated and wrong. Republicans went after some of our hardest working families to score cheap political points with their own party. And everywhere I go across this state, I say that. My position has never changed and won’t change.

In this campaign, there have been many mischaracterizations of my stance on labor. Most recently an out of context quote in which I was trying to say that there are bad actors in every sector of life, including, and especially, in big business. It’s why I’ve been so strongly outspoken about this terrible Apple deal Governor Reynolds has subjected our state to while underfunding education and making a mess of our healthcare system.

I am seeking further information on the labor union to which Hubbell belonged. That was news to me.

Other candidates for governor or outside groups hoping to influence Iowa’s election will likely commission message-testing polls before the June 5 primary. If you are asked to participate in a political survey, please do not hang up the phone. Rather, take detailed notes or record the call and share the information confidentially: desmoinesdem AT bleedingheartland.com.

Top image: cropped photo of Fred Hubbell from one of the candidate’s direct-mail pieces.