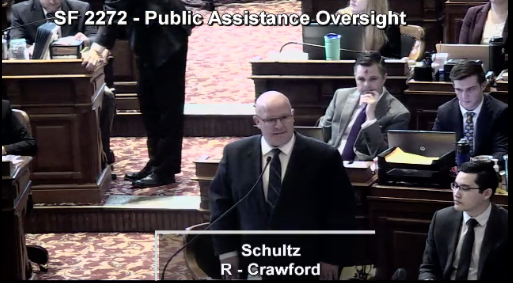 Senate File 2272, which passed along party lines February 26, would require the state to contract for extra screening, looking for evidence of Iowans enrolled in more than one state. Labor and Business Relations Committee chair Jason Schultz introduced and floor-managed the bill. He has been attempting to pass versions of this legislation for years and sponsored five bills in a similar vein in 2019.

The vendor that would receive the contract, LexisNexis, does similar work in other states, often flagging 15 percent of beneficiaries as possibly fraudulent. In the five southern states that have adopted this screening, further checks have confirmed dual participation by just 0.1 percent to 0.2 percent of enrollees, on average.

You can watch the nearly three-hour Senate debate on the chamber's official video, starting around 4:14 pm.

The only organizations lobbying for Senate File 2272 are Americans For Prosperity (a Koch-funded group aligned with the American Legislative Exchange Council), Iowans for Tax Relief, and the Opportunity Solutions Project, a prominent advocate of the bills Schultz introduced last year.

Schultz started the Senate floor debate by noting that the U.S. Department of Agriculture fined the state of Iowa $1.79 million last year for overpaying SNAP benefits by 9 percent and underpaying by 1 percent. (In an interview with WOI TV-5 last summer, Democratic State Representative John Forbes said the high error rates could be caused by staff cuts, which have eliminated roughly 1,000 positions at the Iowa Department of Human Services in the past ten years.)

Schultz then described a visit to DHS to learn more about the current process for checking on those who apply for public assistance. While he praised the agency's staff for their hard work, he asserted that there are more efficient and effective ways to verify eligibility.

The many organizations registered against this bill fear that eligible children or adults will get falsely flagged by LexisNexis and struggle to reapply. Folks with physical and/or mental injuries already have enough barriers. For those Iowans, the "churn in the system" where Medicaid becomes a revolving door would be harmful.

Schultz also spent some time talking about the meatpacking plants in Denison, which is part of his district. He claimed that undocumented immigrants have told their co-workers about buying fraudulent papers and applying for "welfare." Schultz has long used anecdotes about undocumented workers or people cheating to receive government benefits as a wedge issue to rile up his voters. It's part of his world view and fits into the political narrative he promotes.

If those employing undocumented workers were held accountable, immigrants without authorization to be in Denison would leave, and and the issue would be solved. Except the meatpacking plants need cheap labor, which is why policy-makers pretend to address illegal immigration with bills like Senate File 2272.

Schultz then shared some statistics from an October 2019 National Conference of State Legislators report on the National Accuracy Clearinghouse, which the 2018 Farm Bill charged with preventing "multiple issuances of SNAP benefits."

He started with the table below, figure 7 from a 2015 report on the National Accuracy Clearinghouse's work. Notice they removed the month of November because it had some "abnormalities." That's red flag number one. 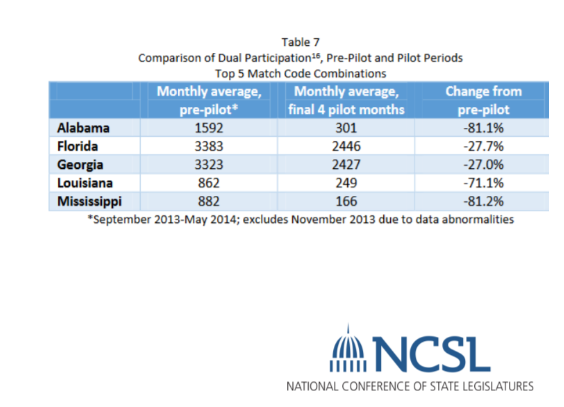 Schultz said Alabama removed 81.1 percent of alleged dual participation offenders. He noted Florida and Georgia didn't apply themselves as much, only removing 27 percent of recipients who were dually enrolled.

81 percent sounds like a big number. But Schultz omitted table 1 of the study. When you see that table, you understand that the percentage of SNAP recipients confirmed to be enrolled in more than one state is between 0.087% and 0.171%. Red flag #2. 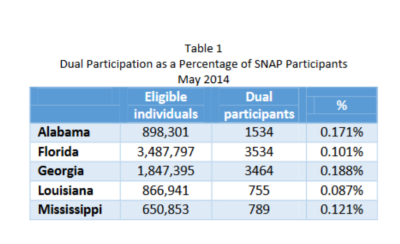 The only amendments Republicans approved were offered by the floor manger Schultz. One would give beneficiaries only ten days instead of thirty days to respond to any action made on their benefits.

Another was to open up third party vendors to do research for the state. While the senators debated that language, Senate Minority Leader Janet Petersen asked Schultz about protection against identity theft. What data would the third-party vendor receive from the agency? Schultz confirmed the vendor would receive information from the application.

She then listed all the personal information required on an application for food assistance, would be shared between LexisNexis and DHS:

Schultz said that whoever was in charge of the data would keep the information "locked down," and the vendor would not be able to sell it. Yet a while earlier he had shared an anecdote about undocumented workers buying fake credentials, to justify running one-third of Iowans through this system. Petersen argued that there is no guarantee a third-party vendor would be able to keep Iowans' data and personal information secure.

Democrats including Senators Nate Boulton and Zach Wahls offered several good amendments to keep Iowans who need help from getting wrongly kicked off the rolls. Wahls had it right when he said folks should be innocent until proven guilty. His amendment would keep the benefits going while any discrepancies are being investigated.

Supporting that proposal, State Senator Liz Mathis expressed concern Senate File 2272 would create a system with many false positives, which would keep Iowa's children from getting nutrition. The SNAP allotment per meal is about $1.50.

Fellow Democrat Amanda Ragan runs a soup kitchen in Mason City and knows "how critically important" food is for people in need. She warned colleagues about "unintended consequences" from the bill, especially kids going hungry.

Schultz argued that Wahls' proposal went against the current DHS process, adding that it would be a less humane way to go, because the state would have to claw back any monies paid to people determined to be ineligible.

Republican Senator Tom Greene wanted to add to the discussion, starting around 6:13 pm. Greene said when he decided to run for the legislature in 2016, he campaigned on what he called "the Chicago migration."

The race-baiting concept is that folks are coming from Chicago to apply for benefits in Iowa as well as Illinois. Greene heard about the alleged problem frequently from constituents and wanted to do something about it.

If someone came from Chicago to Iowa, the shortest trip would be to Clinton or the Quad Cities. Since Des Moines County (containing Burlington) has a high percentage of residents on SNAP, I can understand Greene's desire to blame the suffering of his constituents on the Chicago migration. It's easier than taking responsibility for Republican policies like lowering the minimum wage in five counties in 2017. A wage where his constituents didn't need SNAP to get by would go a long way to fix this, and he certainly could have sponsored a bill to raise wages for his district and all of Iowa.

Greene recalled speaking to the head cashier at a Hy-Vee grocery store, who told him of two men who came in and used SNAP cards to buy king crab, lobster tails, giant shrimp and a $60 dollar cake for a Super Bowl party. He said another grocery store owner told him about a man who wanted to buy Alpo for his pit bull. After being told SNAP benefits can't be used for dog food, the man allegedly bought ground chuck meat for his pit bull.

Greene's speech wasn't a dog whistle, it was a foghorn.

He concluded by telling Mathis he was sure those lobster tails weren't going to children.

During the final hour of debate, Republican Senator Brad Zaun called a point of order on Democratic Senator Joe Bolkcom, who had said Schultz is "obsessed" with this issue and keeps "grinding away" at poor people and those with disabilities. Senate President Charles Schneider found the point well-taken and instructed Bolkcom to stick with the matter being debated and not question anyone's personal motives.

Democratic Senator Rob Hogg noted that Schultz had hailed the fiscal note on the bill, which estimated Iowa would save $12 million per year. But Hogg noted that the projected savings would come from people being kicked off the Medicaid rolls. Nonpartisan analysts don't expect the state to save money by cutting food assistance.

Boulton emphasized that both Democrats and Republicans are against fraud. But this bill "isn't about fraud. This discussion is about people who are not abusing the system getting caught, getting caught in a mechanism that cuts off their health care and basic food that they need to get by."

I want to give a special shout out to Democratic Senator Pam Jochum. The highlight of the debate for me happened around 6:45 pm when she asked how well Medicaid privatization has worked with third-party vendors, and why we haven't had a meeting of the Medicaid oversight committee, if we're so worried about fraud.

Wage theft costs Iowa workers an estimated $600 million a year, but the Democratic bill to address that problem has "been buried for years," Jochum said. She also mentioned that according to the Internal Revenue Service, one out of every 30 Americans don't pay taxes, and the "worst offenders" are businesses pocketing payroll taxes. She expressed hope that when the Iowa Senate debates tax bills later this session, Republicans will go "just as aggressively at the tax cheats" in the business community as they target poor people with this bill.

Wahls later called a point of order on Schultz, as the Republican used his closing remarks on Senate File 2272 to call Democrats socialists and bring presidential politics and Medicare for All into the discussion. It sounded like a campaign commercial to me. Schneider ruled the point well-taken. When Schultz resumed, he seemed a bit flustered but made his points and moved the bill. Republicans approved it by 32 votes to 17.

Senate File 2272 has been referred to the House Human Resources Committee, which must approve it by the second "funnel" deadline on March 20 to keep the bill alive for this session.

Between Schultz echoing President Donald Trump's claims about undocumented immigrants getting benefits and Greene talking about the so-called "Chicago migration," a thread of bigotry runs through this legislation.

Here's hoping Senate File 2272 never makes it onto the House debate calendar. Leave that stain on the upper chamber.

Update/Editor's note from Laura Belin: Iowa legislative leaders decided on March 15 to suspend the session for 30 days. When lawmakers return, I anticipate they will relax the funnel deadline. But even so, I would be surprised if the House and Senate take up many bills not related to the state budget.