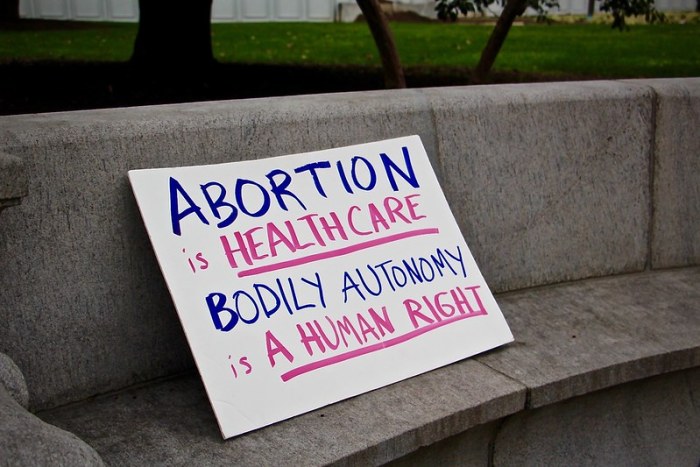 Only three days after staff for Governor Kim Reynolds confirmed surgical abortions are among the "nonessential or elective surgeries" now prohibited in Iowa under a public health emergency proclamation, several groups went to court to block the governor's action.

Plaintiffs are asking the court to declare that the part of the governor's March 26 proclamation, "as interpreted to ban abortion procedures, violates the Iowa Constitution," and to prevent the state from enforcing the temporary ban on surgical abortions.

They note that Iowa clinics "have already been forced to turn away patients in need of time-sensitive abortion care scheduled for this week," and must do so as long as the governor's proclamation remains in effect. Its restrictions are set to expire on April 16 but could be extended, perhaps for months, as COVID-19 infections increase.

The Iowa Attorney General's office confirmed they will represent the state in this matter but otherwise deferred comment to the governor's office, where staff did not reply to Bleeding Heartland's inquiries.

This post summarizes the main legal arguments. The documents filed in court on March 30 are enclosed at the end of this post.

"IT IS UNCONSTITUTIONAL TO BAN ABORTION PRIOR TO VIABILITY"

The Iowa Supreme Court held in 2018 that the state constitution protects a woman's right to an abortion. Although four of the five justices who concurred in that opinion no longer serve on the high court, the precedent stands. The lawsuit filed today maintains,

The Proclamation, as interpreted by the Governor’s office to ban all abortion by procedure (“abortion procedures”), flagrantly defies clear and binding constitutional precedent recognizing that patients have a protected liberty interest in terminating an unwanted pregnancy, most recently confirmed by the Iowa Supreme Court in Planned Parenthood of the Heartland v. Reynolds, 915 N.W.2d 206 (Iowa 2018), and applied in Planned Parenthood of the Heartland, Inc. v. Reynolds, 2019 WL 312072. No such law banning previability abortion care has been upheld, either federally or in Iowa, since the U.S. Supreme Court recognized in 1973 in Roe v. Wade, 410 U.S. 113 (1973), that women have a protected right to end an unwanted pregnancy. To the contrary, decades of unanimous precedent is clear that it is unconstitutional to ban abortion prior to viability.

The governor's order does not affect medication abortions, administered through a prescription. However, the petition notes,

Since Iowa already bans almost all abortions after 20 weeks of pregnancy, many affected people will be forced to carry pregnancies to term.

Specifically, plaintiffs assert Reynolds' proclamation is unconstitutional in three ways. First, it violates the due process rights of "Petitioners’ patients seeking and obtaining abortions" under Article I, Section 9 of the state constitution.

Second, it violates "Petitioners’ and their patients’ rights to equal protection of the laws" in Iowa, under Article I, Sections 1 and 6, by

(a) singling out abortion from all other time-sensitive medical procedures; and
(b) discriminating against women on the basis of their sex and on the basis of gender stereotypes.

Third, the abortion restrictions violate the "inalienable rights of persons to liberty, safety and happiness, as guaranteed by article I, section 1 of the Iowa Constitution."

The lawsuit and supporting documents argue at length that surgical abortions, which are also called "procedural abortions," should not be grouped with nonessential or elective procedures. At least eight organizations representing medical professionals have recognized that "abortion care is essential care because it cannot be delayed without risking the health and safety of the patient."

In a joint statement issued on March 18, "group of preeminent national medical organizations" said abortion should not be categorized as a procedure that can be delayed due to the COVID-19 pandemic, "because it 'is an essential component of comprehensive health care' and 'a time-sensitive service for which a delay of several weeks, or in some cases days, may increase the risks [to patients] or potentially make it completely inaccessible.'"

As pregnancy progresses, abortions can become more complicated and lengthy procedures. Some patients will bump up against Iowa's 20-week ban and be unable to terminate the pregnancy. That's more risky because whether administered through medication or other procedures, abortions "are substantially safer and require substantially fewer medical interventions than continuing a pregnancy through to childbirth."

Even with an uncomplicated pregnancy in an otherwise healthy individual, carrying a pregnancy to term and giving birth poses serious medical risks, often requiring substantial medical care, and can have long-term medical and physical consequences. For a person with a medical condition caused or exacerbated by pregnancy or for a person who receives a diagnosis of a severe or lethal fetal anomaly, these risks are increased.

Denying abortion to a patient seeking to terminate a pregnancy can be especially risky for reasons grounded in the current health crisis.

The social-distancing policies that have been put in place to combat the pandemic have isolated many victims of intimate partner violence from social support organizations or friends or family who may otherwise provide support and protection from violence. As family members spend more time in close contact and cope with the stress of the pandemic and its attendant effects, the likelihood that individuals in an abusive relationship will be exposed to violence is “dramatically increased.”18

In addition, the American College of Obstetricians and Gynecologists says "pregnant women should be considered an at-risk population for COVID-19," because research has shown they are more likely to have complications or die from respiratory infections like influenza.

If a person is forced to continue a pregnancy against their will, particularly during a global pandemic, it can pose a risk to their physical, mental, and emotional health, as well as to the stability and wellbeing of their family, including their existing children. Pregnancy, childbirth, and an additional child may exacerbate an already difficult situation for those who have suffered trauma, such as sexual assault or domestic violence.22

The petition addresses the stated purpose of the governor's action as well.

"ABORTION PROCEDURES DO NOT REQUIRE EXTENSIVE USE OF PPE"

Reynolds denied on March 29 that she suspended surgical abortions because of her "personal ideology." She said she had not singled out any one procedure and that she halted nonessential surgeries in order to preserve the personal protection equipment (PPE) health care professionals will need to care for COVID-19 patients.

The court filing notes, "As responsible healthcare providers, prior to the Governor’s statement, Petitioners had already taken numerous steps to conserve PPE, including by reducing patient volume and suspending certain non-essential procedures."

More to the point, the governor's pretext rests on a faulty premise.

While sometimes referred to as “surgical abortion,” an abortion procedure is not what is commonly understood to be “surgery”; it is a straightforward outpatient procedure involving no incision, no need for general anesthesia, and no requirement of a sterile field.

Abortion procedures do not require extensive use of PPE. While physicians use some PPE for abortion procedures—such as non-sterile gloves for each procedure, one face shield per shift, and a washable, cloth lab jacket—only a small number of health care staff are physically present for these procedures or their preparation/recovery and therefore in need of PPE. Petitioners do not use N95 respirators, the PPE in shortest supply during the COVID-19 pandemic.

Whereas abortion "is a straightforward outpatient procedure requiring little PPE," forcing women to continue pregnancies will mean "more encounters with an already overtaxed medical system, including encounters with a hospital system that is in crisis. All of these encounters could require more PPE, not less, than an abortion would have required."

The vast majority of abortions in the United States are provided in an outpatient setting. In comparison, more than ninety-eight percent of births in the United States take place in a hospital.3 Complications from both medication and procedural abortion are rare, and when they occur, they can usually be managed in an outpatient clinic setting, either at the time of the abortion or during a follow-up visit. Major complications—defined as complications requiring hospital admission, surgery, or blood transfusion—occur in less than one-quarter of one percent (0.23%) of abortion cases: specifically, such complications arise in just 0.31% of medication abortion cases, 0.16% of first-trimester procedural abortion cases, and 0.41% of procedural cases in the second trimester or later.4 Abortion-related emergency room visits constitute just 0.01% of all emergency room visits in the United States.5 By comparison, as many as ten percent of women who carry to term are hospitalized for complications associated with pregnancy aside from hospitalization for delivery.6

To obtain a temporary injunction blocking Reynolds' policy while the lawsuit is pending, the plaintiffs need to show they and their plaintiffs will suffer irreparable harm if the order goes into effect, and that they are likely to prevail when a court considers the merits of their claim. The motion for a temporary injunction lays out the arguments in detail. Patients "forced to continue pregnancies against their will, particularly during a global pandemic," may suffer damage "to their physical, mental, and emotional health, as well as to the stability and wellbeing of their family, including their existing children." They will have no legal remedy.

Moreover, under the "strict scrutiny" standard the Iowa Supreme Court used in its 2018 ruling, the state would need to show the abortion restriction "is narrowly tailored to serve a compelling state interest." Reynolds' policy fails, because

Planned Parenthood and the ACLU have filed similar lawsuits in four other states where Republican politicians seized on the COVID-19 crisis to restrict abortions. Federal judges in Alabama, Texas, and Ohio ruled on March 30 that abortion clinics can continue to provide services in those states while litigation is pending.

In that light, I will be surprised if the Johnson County District Court doesn't issue a temporary injunction blocking this part of the governor's policy.

If the suspension of nonessential surgeries continues long enough for this case to reach the Iowa Supreme Court, we will find out whether Reynolds' four appointed justices will join the two dissenters from the 2018 case to overturn the idea that our state constitution protects a right to an abortion.

Petition for declaratory and injunctive relief

Exhibit B was the March 27 Des Moines Register article by Barbara Rodriguez.

Exhibit G: Letter to Governor Reynolds from the legislative chair of the Iowa Section of the American College of Obstetricians and Gynecologists

Top image: Photo by Robin Marty, taken outside the U.S. Supreme Court on January 22, 2016, available via Flickr and published with permission.