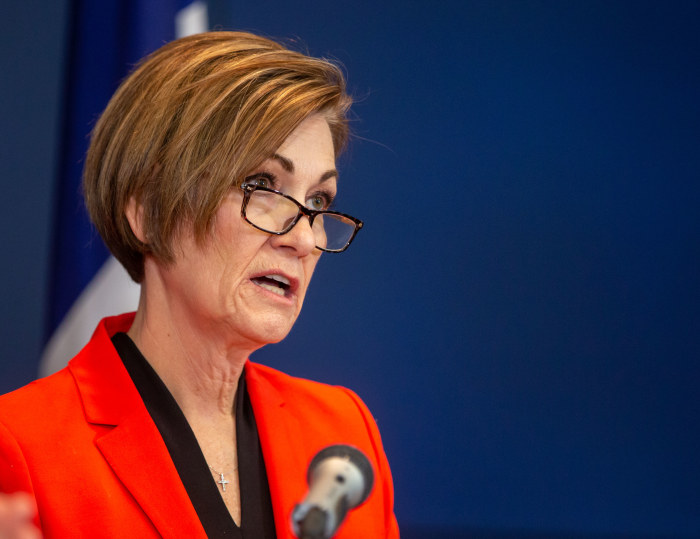 UPDATE: The ACLU of Iowa, Planned Parenthood, and the Emma Goldman Clinic filed suit to block this policy on March 30.

All nonessential or elective surgeries and procedures that utilize personal protective equipment (PPE) must not be conducted by any hospital, outpatient surgery provider, or outpatient procedure provider, whether public, private, or nonprofit.

Reynolds' staff released that statement in the late afternoon, after the governor's final news conference of the week.

The latest proclamation defines a nonessential surgery or procedure as

one that can be delayed without undue risk to the current or future health of a patient, considering all appropriate factors including, but not limited to any: (1) threat to the patient’s life if the surgery or procedure is not performed; (2) threat of permanent dysfunction of an extremity or organ system; (3) risk of metastasis or progression of staging; and (4) risk of rapidly worsening to severe symptoms.

Bleeding Heartland emailed some follow-up questions to the governor's office. Can a physician perform a surgical abortion if the doctor believes not doing so will risk a pregnant person's health, even if a life is not immediately threatened?

Has the governor suspended D&Cs after a miscarriage? Medically, D&Cs are defined as abortions. In most cases, a patient's life is not in danger when a doctor removes remaining tissue from the uterus. However, the proclamation might be interpreted as allowing the procedure because without it, infection could develop following an incomplete spontaneous abortion.

I will update this post in the unlikely event I receive clarification from Reynolds' staff.

I also sought comment from the Emma Goldman Clinic in Iowa City and from Planned Parenthood of the North Central States, which operates several Iowa clinics. Had any state officials informed them of a temporary ban on surgical abortions? I was unable to reach anyone at Emma Goldman. Planned Parenthood had no comment beyond this statement: "We are assessing the executive order in light of the Governor’s comments today."

Iowans can still access medical abortions, administered through prescribed medication rather than surgery. The American College of Obstetricians and Gynecologists considers that approach safe and effective through nine weeks gestation. After that point, surgical abortions are usually the only option for someone wanting to terminate a pregnancy.

Reynolds' proclamation is set to expire at 11:59 pm on April 16, but she could extend it indefinitely, depending on how COVID-19 infections progress. The number of confirmed cases in Iowa jumped to 235 on March 27, affecting residents of 46 counties.

An Iowa Supreme Court majority ruled in 2018 that the state constitution protects a woman's right to abortion. That precedent stopped Reynolds from enacting a near-total abortion ban she had signed into law.

This week, the governor found a back-door way to restrict Iowans' reproductive rights through a public health emergency.

UPDATE: During the governor's March 29 news conference, Lee Newspapers reporter Erin Murphy asked Reynolds whether she received "medical expert guidance" before declaring abortions to be elective procedures, or whether the decision stemmed from "your personal ideology." My transcript of her response:

No, it was not. The proclamation suspends all nonessential and essential [sic] surgery procedures until April 16, and we believe that that does include surgical abortion procedures. The decisions that I have made have been made in the vein of really helping us strategically use our PPE stockpile that we have. That has been an issue from the very beginning of this.

I believe at every press conference I have stated that the two things that, you know, we are really are worried about, is making sure that we have the personal protective equipment to take care of those Iowans who are on the front line serving Iowans and those in need, as well as our first responders, and then just the workforce, to make sure that we have our health care providers and our first responders healthy so that they can take care of Iowans. And you know, it's the same thing that I've applied to everything.

Reynolds explained that she didn't order restaurants and bars to stop offering in-house service "to go after the hospitality sector." That decision was grounded in data. She didn't suspend church services of more than ten people "to go after our faith community." It was part of a strategy to slow the spread of the virus. "Everyone is making sacrifices. Everyone. And so this is a decision that we're making on a daily basis, and that was no different."

The governor added that suspending nonessential surgery was important because it will free up anesthesia machines to be converted to ventilators if necessary.

She didn't acknowledge that most surgical abortions are not performed under general anesthesia.

Murphy followed up to say the governor will get "pushback" from people saying abortion is not optional or elective. How would she respond?

Well, you know, we kept it broad. I didn't specifically address everybody. We kept the language broad, we, you know, so if they have a question, any of the--you know, does a kidney stone apply? You know, there are those kind of questions that are happening with everything. [...]