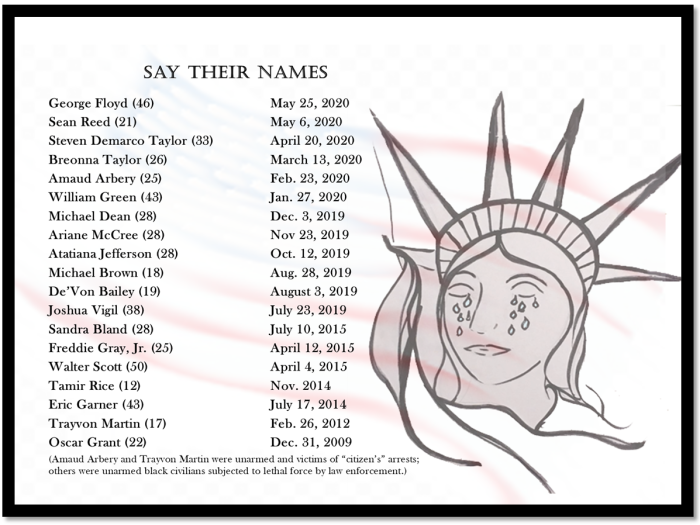 Perhaps Justice should rear its head, too

Ten reactions to the killing of George Floyd and protests around the nation, including, of course, in Des Moines:

2. The print edition of the Sunday Des Moines Register had what I would call a white person’s headline on Rekha Basu’s column: “Across America racism rears its ugly head.” For millions of our fellow citizens racism never “rears its ugly head.” Doesn’t have to. It confronts them 24/7. Never goes away.

3. The news coverage, as usual, treats peaceful protests and disruptive violence as part of the same package, seldom distinguishing people of anguish seeking to pull us together from the people of violence seeking to tear us apart.

4. Can you ever recall someone saying of white supremacists or Klansmen, “You know, these people have concerns to express, but they’d get more support if they did it peacefully.” No. Because of silence and fear, the Klan and similar types often get an “Oh well!” than an “Oh Hell” reaction.

5. When we say, “In America people have a right and often a good reason to protest, but do they have to be disruptive?,” what we mean is, “We wish these people would protest in a way we can ignore.”

6. We’re doubly cursed these days because the president, instead of offering unity, leadership, and sanity, offers divisiveness and tantrums, stoking the outrage, adding fuel to the fire.

7. As is the case in other arenas, the work, compassion, and dedication of most police and public servants are sabotaged by fellow workers who disgust them, too. And then we rush to put “We support the police” signs in our front yards — as though that should be a novel or even controversial idea.

8. In our places of worship and other public gatherings, prayers, support and sentiments are often rightly expressed on behalf of those in the armed forces, those in government, first responders, and others who serve on our behalf. As for those striving for peace and justice, protesting peacefully and suffering martyrdom–well, it’s kind of nice to have them around, too, but not in public prayers or thanks.

9. Which brings us back to Addie Mae, Cynthia, Carol, and Carol Denise, the four African-American Sunday school children killed in the 16th Street Baptist Church bombing in Birmingham, Alabama on September 15, 1963. And I’ll mention the Reverend James Reeb, too. He was a white minister who served in Presbyterian and Unitarian churches and was fatally clubbed by white segregationists because he went to Alabama to participate in the Selma-Montgomery civil rights march in March 1965. The black hospital in Selma did not have the facilities to treat him. The white hospitals refused.

10. A thought about how justice might rear its head, too. Perhaps meetings of the civil rights or human rights commissions in our cities, counties, and states could open each meeting, marking that session as being held in tribute to named persons like the Sunday school children, clergy. and lay persons who suffered in the cause of justice and equality. There are enough names to go around.