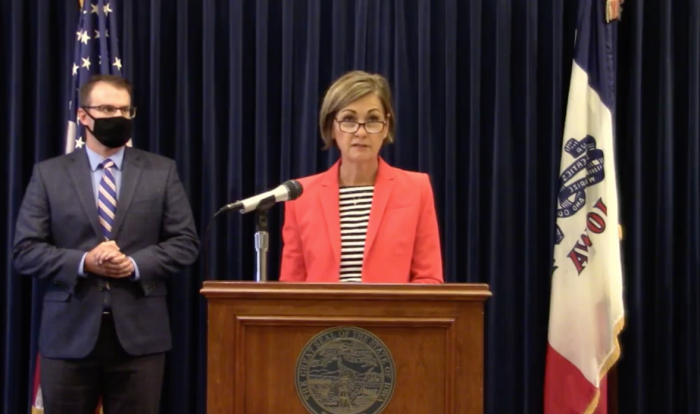 The old saying, the “The Devil is in the details,” applies to Governor Kim Reynolds' July 30 press conference in more ways than just the policy she announced.

First, I’d like to discuss the details of the press conference logistics, because that matters almost as much as the substance.

The sound quality was horrible. Almost anyone who has fielded questions knows you either have to repeat the question or make sure there is a microphone available for questions. The governor did neither. I would suggest that instead of having Lieutenant Governor Adam Gregg standing in the background like a praying statue, she could have him take the microphone to reporters asking questions, so the public can hear the question and perhaps understand the response.

I would also suggest that any written guidance to be discussed at a press conference be distributed ahead of time, and that the governor use that document as the starting point.

People with a hearing impairment have children in school too, and they deserve to have some communication. There was no sign language interpreter.

[Editor's note: Reynolds announced that beginning next week and at least through the month of August, she will go back to holding news conferences on Tuesday and Thursday at 11:00 am, to be televised on Iowa PBS. That should address the sound quality and accessibility problems.]

Now to the substance.

Here's the Iowa Department of Education and Department of Public Health guidance on "Reopening Iowa's Schools Safely and Responsibly":

Although difficult at times to understand, the main idea of the governor's press conference was: school districts will not be granted permission for a building or the whole district to transition to remote learning until the county where they are located has a positive COVID-19 testing rate exceeding 15 percent within the past fourteen days, and the district absenteeism rate is 10 percent or higher.

On a chart provided, the above guidance was labeled as “Substantial Controlled.”

I don’t think parents, teachers, and students will believe anything is under control if 10 percent of their friends from school have coronavirus.

The next category mentioned on the chart is “Substantial Uncontrolled.” The actions a district is directed to take are the same ones mentioned under the category of “Substantial controlled,” even though the positivity rate is at 20 percent or higher. That’s just confusing.

All of the above will be based on the ability to test and get results in a timely fashion. That has certainly not been the case so far.  I would have loved to hear Reynolds speak about how she is going to assure that local county health departments and hospitals can turn around the results of testing within hours and not days or weeks.

The guidance includes a short paragraph about "Identifying Close Contacts for COVID-19 Cases" if a student tests positive. It does not say whose responsibility it is to begin contact tracing. If we are relying on the memory of a kindergartner or first grader--or for that matter, a high school sophomore--to determine with whom they spent more than fifteen minutes less than 6 feet apart, good luck.  Most experts believe contact tracing in a timely and accurate manner is as essential as testing.

Under this guidance, if a student tests positive, he or she is required to isolate for ten days, even though the recommended time of isolation is fourteen days.

If a student tests negative after being exposed, he/she will still be required to quarantine for 14 days prior to returning. I am concerned that some parents will not take this directive seriously and will send their children back to school. Districts will need a firm policy on how to handle these students, and there is no mention of this in the directives.

Educators are treated differently from students, and this is the most chilling sentence on the chart: "Staff may be considered critical personnel and can be allowed to return to work if there are staffing shortages as long as they remain asymptomatic.”

This advice flies in the face of good medical science. We already know that asymptomatic people can spread the virus.

In addition, it sets up a dilemma for educators who want to protect their students from the spread and the demands of a district to return to work because of staff shortage. There may be legal battles, with educators caught in the middle.

If we wait until there is a 15 to 20 percent test positivity rate in a county, it’s too late. Schools will spread the virus much like we saw happen in the meatpacking industry. We need to be following the guidance of medical professionals when they say a 5 percent positivity rate is the threshold for opening schools safely.

Reynolds spent a great deal of time talking about being flexible in a fluid situation. She needs to do the same. The governor should be flexible enough to mandate face coverings in Iowa.

Moreover, the local school situation may certainly change and the people best able to make changes quickly as circumstances dictate are local school officials. Yet under the state's guidance, "Only the Departments of Education and Public Health can make the determination and provide temporary authorization to move to 100% online or remote learning." Tying the hands of local leaders is not being flexible; it’s ignoring science and replacing it with political ideology.

If one child or educator dies, that’s one too many. We can talk about percentages and essential workers all we want, but it all comes down to the lives of our friends and neighbors. We need to listen to health experts and protect both our kids and our educators.  Governor Kim Reynolds is not doing that with these directives.