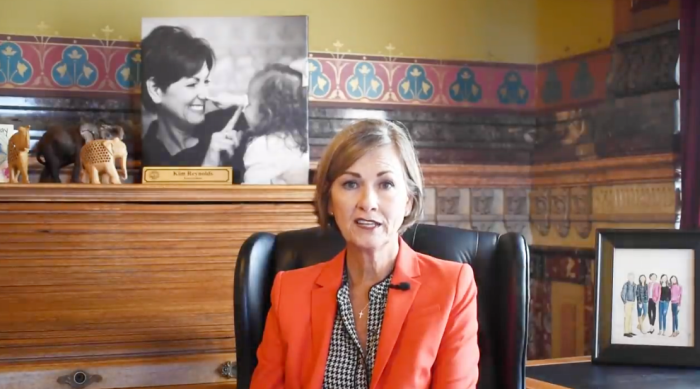 Bruce Lear responds to Governor Kim Reynolds’ recent open letter to Iowans, enclosed in full at the end of this post. -promoted by Laura Belin

Thank you for your letter to all Iowans. I thought I’d take a minute to respond, certainly not for all Iowans, but for one very concerned citizen.

The theme of your letter seems to be that we are all in this together. We are. But there are different levels of “together.” It’s a lot like the old story of the chicken and the pig asked to contribute to breakfast. The chicken drops off her contribution and leaves, and the pig sacrifices everything.

You drop a proclamation, while educators and students face sacrificing everything to meet your demands. It’s not a media “scare tactic.” It’s real.

Don’t get me wrong, I don’t think you are evil or even mean. I see two possible motivations for your decisions. I believe you are either stuck in a political quagmire called “Trumpism,” and you haven’t found a way to escape, or you are auditioning for a second act in a second Trump term that may never come.

I hope neither of my explanations are correct, but they do explain a couple of your recent decisions. For one, your decision to be one of only a few governors not to issue a mask mandate is troubling. Iowa is the only state where schools must open in person but face coverings are not required in public. While that decision must have earned you quite a few figurative hugs from the president, it created deep anxiety and outright fear in the education community.

You say in your letter that, “Iowans dug deep and did their part.” Some did. But once you said bars could open, and never mandated face coverings, you sent a mixed message to those poised to party. The virus exploded in Iowa again, not in a second wave but a sequel to the first. June and July felt more like March and April.

You decided to use artificial percentages in order to force unsafe schools to remain open, even if their county is flooded with COVID-19 cases. During your press conferences earlier this month, you often referred to a matrix used to determine the spread of the virus.

I’ll admit, I never understood the movie The Matrix, and I sure never understood what numbers you were using. When Dr. Caitlin Pedati, the state epidemiologist, tried to make it clearer, she sounded a lot like that teacher in the Charlie Brown cartoons.

Now, the magic percentages for schools to be allowed to request remote learning seems to be a 15 percent positivity rate in the county and a 10 percent absentee rate for students over a 14-day period.

But wait. That might only be if the positive rate is not caused by a prison or a nursing home outbreak. Depending on the “community context,” the state might not approve school closures even if the positivity rate were above 20 percent.

Why not try local control instead?

I know you are convinced it’s better for kids to be in school. I agree. But kids shouldn’t be in a place that could kill them. We wouldn’t ask kids to return to a school building if part of the building were on fire, and we shouldn’t ask educators to be the canaries in the coal mine for this. It’s too risky.

In closing, let me offer one more piece of unsolicited advice. Educators are very patient people. After all, they work with kids every day. But they are not huge risk takers who throw caution to the wind.

They are resourceful and devoted, but that devotion is being taxed mightily by the decisions you are making. Some are ready to walk away and call it a career. Still others have faith that you will find a foothold and emerge from the Trump shadow to reconsider your decisions, and base them on science and a good deal of that small-town Iowa common sense you campaigned on.

Tomorrow marks five months since we learned of the first positive cases of COVID-19 in Iowa. Since then, our lives have been disrupted in ways we couldn’t have imagined. Schools and businesses closed. A record number of Iowans were suddenly out of work. And our normal daily routines were turned upside down as we prioritized doing things differently to mitigate the spread of the virus.

From the start, we’ve each had a role to play to protect our own health, and that of our families, friends and fellow Iowans.

Early on, as cases were on the rise, Iowans dug deep and did their part. And it made a difference. Positive cases trended down, hospital capacity remained stable, businesses began to reopen and life started to feel a bit more normal.

But normal during a pandemic isn’t the same normal as before. COVID-19 is still a reality, and circumstances still demand we do everything within our control to contain and manage it.

Over the last several weeks, we’ve seen case counts ebb and flow, just as many other states across the nation have. And while we know that the majority of them are driven by young adults gathering socially, it’s the unintended consequences of those activities that are cause for concern. Especially the potential impact to vulnerable Iowans.

Now is not the time to let our guard down.

Iowa has a lot to gain by working together to keep our communities healthy. Especially now, as we’re preparing to safely return to school.

Our individual actions will either keep us moving forward, or put the progress we’ve made at risk.

Preventive health measures are still the best defense against COVID-19. Wash your hands often and disinfect frequently used items. When you’re in public, maintain social distance and wear a face mask if you’re able. Stay home if you’re sick. And please… carefully consider whether certain social or recreational activities are worth the risk.

Just as importantly, if you or someone you were in close contact with tests positive for COVID-19 and you’re told to quarantine, take it seriously. You have the ability to effectively stop the spread of the virus by isolating yourself from others during the full 14-day incubation period.

These sacrifices seem small when compared to what’s been asked of other generations of Iowans and Americans over the decades, but that doesn’t mean it’s easy.

COVID-19 has tested each of us, and it will continue to. But we can’t let it deter or divide us.

When emotions are high and opinions are strong, it’s important to take a step back and realize that we’re all working toward the same goal.

And even though we may not always agree on which path to take to get there, we are united in our desire to get back to the way of life we value as Iowans.

We’re all in this together.

Bruce Lear, lives in Sioux City and retired after 38 years of being connected to public schools. He was a teacher for eleven years and a regional director for the Iowa State Education Association for 27 years until retirement. He can be reached at BruceLear2419@gmail.com.

Top photo: Screen shot from the video of Governor Reynolds’ open letter to Iowans about COVID-19.