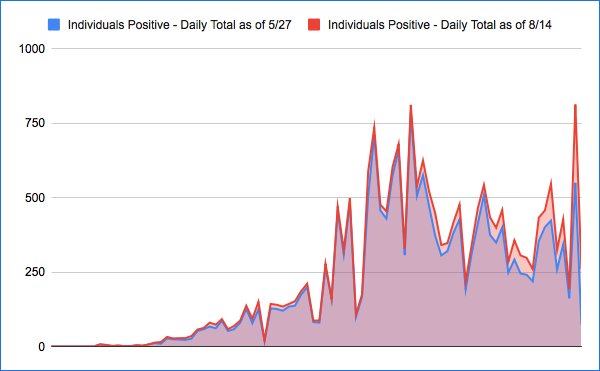 Iowa's COVID-19 website has backdated some cases for months

Rob Ramaekers, the lead epidemiologist for the department's Surveillance Unit, acknowledged in an August 14 email that Iowa's coronavirus website has recorded some recent cases as occurring weeks or months in the past. According to Ramaekers, state officials are aware of the problem and working on a fix.

The backdating means that publicly available numbers underestimate the positivity rate for COVID-19 tests conducted over the past two weeks, a key metric for measuring community spread.

"WE RECOGNIZE THIS IS A PROBLEM"

Many people tracking Iowa's COVID-19 numbers have noticed that case counts on the state's website keep changing, even for dates in March or April. While some delay in recording cases might be understandable, there is no reason it would take weeks or months for data to reach the IDPH. Hospitals and clinics that conduct COVID-19 tests are required to report their positive and negative numbers to the state daily.

IDPH communications staff have not answered journalists' questions about the discrepancies.

Nurse practitioner Dana Jones obtained an explanation in email correspondence she shared with Bleeding Heartland. She contacted the IDPH last week, saying she had been watching publicly available numbers since mid-May.

I would like to know why new positive COVID cases were added to dates as far back as March over the last week. This has been a consistent occurrence since I started following the data.

Jones noted that state education and health officials will use 14-day positivity rates for counties "as one of the main factors" in determining whether it is safe for schools to continue to teach students on site.

If cases are just being added as far back as the start of the pandemic on a regular basis, how can this information be trusted as our guidance? What are the specific reasons why there is a lag of 4-5 months on some case reporting?

Ramaekers replied to Jones on the morning of August 14. Full text of his email:

Thank you for your question. As of this email the x-axis of the positive chart is the date first reported to IDPH. This is a system generated date that never changes once a case is made in our system. So if I tested negative in March and was reported to IDPH, I would have a 'Reported to IDPH' date of March. If I was tested again today and came back positive, my 'Reported to IDPH' date does not change and now suddenly I appear on the graph in March. We recognize this is a problem and have been working on logic to handle it. We are shifting to using the first positive lab collection date. This change could happen as early as today.

At this writing, nothing has changed.

Jones shared with Bleeding Heartland one of the spreadsheets she has been maintaining. Two columns show daily positive case numbers and 14-day rolling totals from the beginning of March to May 27, as they appeared on the state website when Jones first downloaded the data on May 27.

Two other columns show daily positives and 14-day rolling totals for the same time frame (March 1 through May 27), as they appeared on the state website on August 14.

All told, the more recent version of the website showed 2,396 more COVID-19 cases as having occurred through May 27.

Case totals for most dates in March had increased by single digits, but the discrepancies grew larger in April and larger still in May. For some days in late May, the official numbers now show hundreds more positives than had been recorded closer to that time. I created this table to illustrate some of the anomalies.

Jones gave permission to publish these graphs, which she created to show how many COVID-19 cases the IDPH had erroneously backfiled between May 27 and August 14. 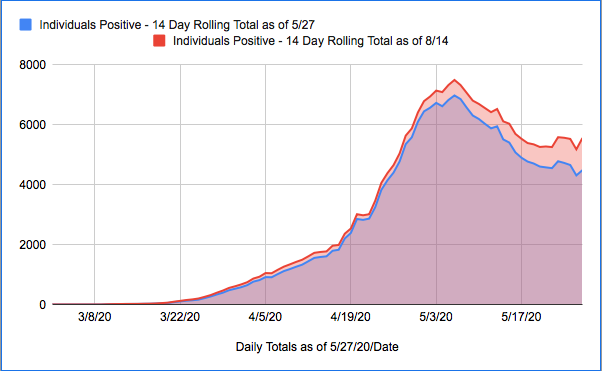 HOW BACKDATING DISTORTS THE POSITIVITY RATE

More Iowans have been getting tested for COVID-19 since late May, with daily test numbers often exceeding 5,000. The state website is not backdating information about tests conducted each day. But some new cases continue to be added to dates weeks or months earlier.

In an August 17 email, Jones told me she has begun analyzing discrepancies in datasets she downloaded from the state website on July 31 and August 14. Her preliminary finding is that the more recent numbers show 5,132 more COVID-19 cases recorded between May 28 and July 31, compared to figures that appeared online July 31.

Some of those could reflect reasonable delays (tests conducted during the last few days of July, with results reported to the IDPH in early August). However, many appear to stem from the "system generated date" problem Ramaekers described.

Early this month, the state website began publishing positivity rates for COVID-19 tests conducted in each county during the previous fourteen days. Many observers have questioned how the IDPH is deriving those percentages after their own calculations produced a different positivity rate for some counties.

I sought comment from the department on Jeff Montgomery's August 12 article for the Dubuque Telegraph-Herald, which raised concerns about the state's methodology. Spokesperson Amy McCoy replied via email on August 14, "There's now a box on that page that shows the way it's calculated."

That error would reduce the positivity rate, giving Iowans a false sense of security about how quickly COVID-19 is spreading in their community and statewide.

At her news conferences, Governor Kim Reynolds has occasionally cited a supposedly declining positivity rate as a sign of Iowa's success in slowing the spread of COVID-19.

Dr. Megan Srinivas, an infectious disease specialist in Fort Dodge, commented via Twitter on August 16 that the anomalies Jones highlighted, "combined with the fact that they are relying on positivity rate to determine all of their policies completely invalidates every decision our state leaders have made."

The publicly available figures on coronavirus in Iowa are flawed in other ways as well.

As Bleeding Heartland first reported last month, the state website does not include positive results from COVID-19 antigen tests. Although the U.S. Food & Drug Administration has approved such tests for diagnostic purposes, the IDPH considers people who receive positive results on antigen tests to be "probable" cases, not "confirmed" cases.

That policy leads to undercounting in communities where hospitals or clinics conduct antigen tests, like Van Buren County in southeast Iowa. As of August 14, that county's public health department was reporting 83 total COVID-19 cases, of which 55 were active. Two residents have died of the virus, according to local data.

Meanwhile, the state website (reporting only results from PCR tests) indicated on August 17 that a total of 42 Van Buren County residents have tested positive for coronavirus, of whom 22 have recovered and one has died.

I am seeking further information on which Iowa communities have a health care provider using rapid point-of-care antigen tests ("Sofia" or "Veritor" machines) to screen for COVID-19 in 30 minutes or less. Please contact me confidentially if you are aware of antigen testing in your area. Note that antibody (serology) tests, which are not suitable for diagnosing active coronavirus cases, are not equivalent to antigen tests.

Another worrisome problem: daily numbers on COVID-19 testing rarely add up. I took this screen shot near the top of the "case counts" page on August 15. 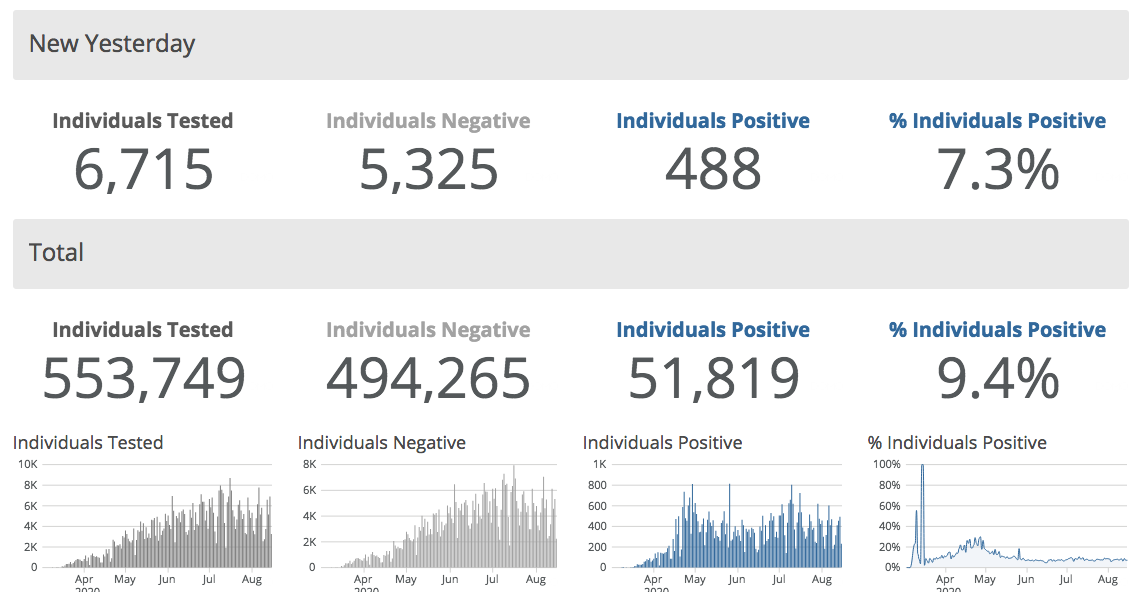 Here are the corresponding numbers for August 16. It's the same story. 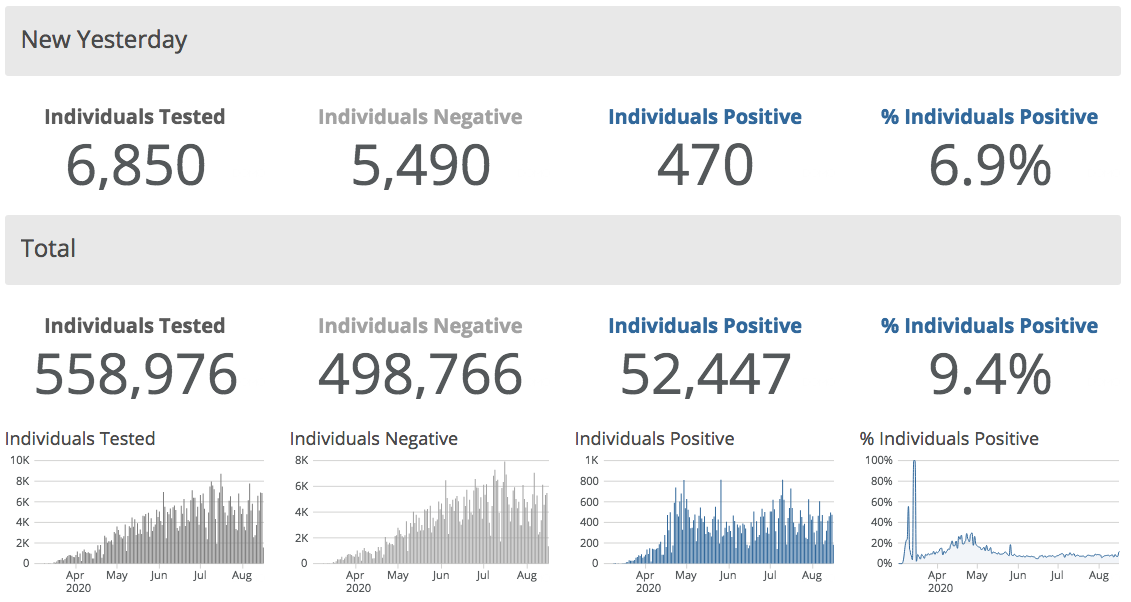 Sara Anne Willette, who maintains the Iowa COVID-19 Tracker website, has flagged other problems, such as how the state counts recovered cases and does not promptly disclose outbreaks in long-term care facilities.

The state's page on long-term care outbreaks does not include any information about cases in assisted living facilities or senior communities with memory care units.

Final note: No one from the department has ever answered my questions about how Iowa is counting COVID-19 deaths. The U.S. Centers for Disease Control releases two sets of numbers for coronavirus fatalities in each state. Depending on which method Iowa uses, the total deaths reported on the state website could be leaving out several people each week for whom COVID-19 contributed to their passing.

UPDATE: Two readers pointed out that this glitch creates potential inaccuracies in the official figures on "recovered" COVID-19 cases. Reynolds announced on June 30 that the state would consider anyone with COVID-19 to have recovered from the virus 28 days after a positive test, in the absence of confirmation that the person is still hospitalized or ill.

I sought comment from the IDPH: If I tested negative in May but positive last week, and the coronavirus website recorded my positive test as happening in May, would that mean the state would immediately count me as a "recovered" person, because the (wrongly dated) positive test was more than 28 days ago? As of the evening of August 17, spokesperson Amy McCoy had not responded.

From Ryan Foley's article for the Associated Press:

“It’s one of the worst data errors that could be happening right now,” said Megan Srinivas, an infectious disease physician in Fort Dodge, Iowa. “We are making these policy calls based on completely flawed numbers and that needs to be acknowledged.” [...]

Mike Beranek, the president of the Iowa State Education Association, a union representing teachers, said Monday that school districts should put their reopening decisions on hold until the data is fully corrected. [...]

Eli Perencevich, a top infectious disease researcher at the University of Iowa, said the state’s target for reopening schools is dangerously high to begin with, and the data errors only make the situation worse. He said the state’s case count was already artificially low because it excludes the results of antigen tests that some local hospitals use.

“There are a lot of small things like this that are adding up to huge things, where we are massively underestimating the cases in the state,” he said. “Both of those should be announced and corrected and cleared up immediately.”

Sara Konrad Baranowski has been investigating the backdating of cases for weeks, she reported for the Iowa Falls Times Citizen on August 17.

The Times Citizen began tracking daily COVID-19 cases in May, using case announcements from Greenbelt Home Care/Hardin County Public Health, and the information made available by the state at coronavirus.iowa.gov. That tracking revealed discrepancies. While the county’s and the state’s cumulative case counts for Hardin County were almost always identical, a portion of the cases being reported by the state as recently as this weekend were being added to dates as far back as April and May.

The Times Citizen reached out to the Iowa Department of Public Health in late July, seeking answers to questions about the inconsistencies. IDPH Spokeswoman Amy McCoy replied: “The state is constantly updating the data at coronavirus.iowa.gov and adjusting it for duplicate tests, reassignments based on county of residence, etc. New information becomes available as case investigation continues, and adjustments are made as needed.” [...]

In Hardin County, the erroneous date reporting can result in a significant difference in “new” COVID-19 cases. For example, on Aug. 10, Hardin County Public Health Coordinator Rocky Reents reported that the county had seen 20 new cases in the previous seven days (Aug. 4-10). But according to the state website, only 11 Hardin County residents had tested positive for COVID-19 during that seven-day span. Despite the discrepancy, both the county and the state were reporting the same total cumulative case count on Aug. 10: 187. A review of the daily case reports for Hardin County going back to March 26 (the first positive case in the county) revealed that the nine unaccounted for cases had been added to May 3 and 20 and June 20, 22 and 23 – a full seven to 13 weeks earlier.