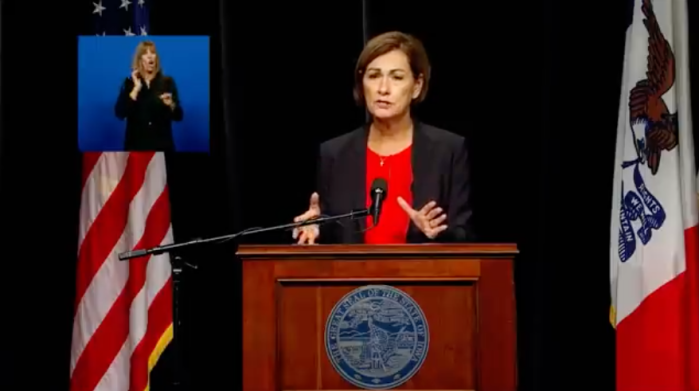 Governor Kim Reynolds erred in directing that $21 million in federal funding from the Coronavirus Aid, Relief and Economic Security (CARES) Act be used to cover the cost of a software system purchased before the COVID-19 pandemic, according to State Auditor Rob Sand.

Sand announced on October 19 that he and the U.S. Treasury Department’s Inspector General “have advised Iowa Governor Kim Reynolds that her decision to use millions of CARES Act dollars to help implement a new software system for state government was not an allowable use of the funds.” The Treasury Department and governor’s office did not respond to requests for confirmation and comment.

Sand also described as “questionable” the use of CARES Act funds to pay the governor’s permanent staff. Bleeding Heartland was first to report last month that Reynolds directed $448,449 in COVID-19 relief funds to pay a portion of salaries and benefits for 21 of her staffers from mid-March through June 2020. Sand warned that a federal audit may eventually determine that the payments did not meet requirements, so reallocating the funds to purposes clearly allowed under the CARES Act would be less risky for taxpayers.

SOFTWARE SYSTEM COSTS NOT “DUE TO THE PUBLIC HEALTH EMERGENCY”

Under U.S. Treasury guidance, payments from the Coronavirus Relief Fund “may only be used to cover costs that”:

1. are necessary expenditures incurred due to the public health emergency with respect to the Coronavirus Disease 2019 (COVID–19);

2. were not accounted for in the budget most recently approved as of March 27, 2020 (the date of enactment of the CARES Act) for the State or government; and

The Governor has chosen to spend $21 million on Workday, an HR/accounting computer system intended to replace the State’s legacy mainframe system. The State contracted with Workday in 2019, which put in place at that time a regular payment schedule. The CRF dollars would be used to meet those regular payments contemplated in the 2019 contract. To justify the expenditure, the Governor’s Office stated “with Workday, the State of Iowa will be able to act quickly to assist essential government employees, giving them flexibility in a number of ways, such as requesting COVID-related hardship help, easier ways to request Family and Medical Leave Act leave types, and automate processes for donating leave, and borrowing leave.”

These expenditures are not “due to the public health emergency.” The State signed a contract in 2019 for these expenditures prior to the emergence of COVID-19. The statement regarding how Workday affects state employees, a portion of whom are themselves working on the public health emergency, is essentially a restatement of the purpose of Workday in general, which did not change with the emergence of COVID-19.

That this expenditure does not meet the first requirement means that there is no need to address whether it meets the other two requirements. Spending $21M on Workday is not an appropriate use of CRF funds. If the Governor does not redeploy these dollars to a lawful use, they will have to be repaid to the federal government. That will result in a $21M loss for Iowa taxpayers.

This is a slam-dunk case. The state signed the Workday contract–without going through a competitive bidding process, incidentally–long before anyone had heard of COVID-19.

Moreover, “It’s unclear how useful the system would be during COVID-19 because it’s not scheduled to be implemented until next summer for human resources and July 2022 for finance,” Erin Jordan reported for the Cedar Rapids Gazette in August. CARES Act funds must be used for costs incurred between March 1 and December 31, 2020.

State Senator Claire Celsi, the ranking Democrat on the budget subcommittee responsible for the governor’s office, asked Sand to investigate the use of COVID-19 relief funding for Workday earlier this year. In a statement enclosed in full below, she criticized the governor’s “misappropriation of taxpayer dollars.”

Celsi called on Reynolds and Roederer “to immediately rectify this situation and use the COVID-19 funding for COVID-19 expenses, not as a supplement to our normal Iowa general fund budget.”

UPDATE: David Roederer confirmed via email on October 20, “I have seen a letter from Treasury” regarding the use of CARES Act funds for Workday. Asked whether Iowa will redirect that $21 million toward another purpose, he replied, “I do not have any additional information.”

“SALARIES MAY QUALIFY ONLY WHEN CERTAIN CONDITIONS ARE MET”

Regarding the governor’s use of CARES Act funds to compensate her staff, Sand wrote to Roederer that it “is not entirely accurate” to say that money can cover salaries.

Most importantly, whether those conditions are met will only be judged in hindsight, upon an audit of the timekeeping records and supporting documentation. That means an inadequate focus on pandemic by those employees, or an indirect focus, and/or an inadequate record-keeping effort, could result in those funds also having to be repaid to the federal government. That would result in a loss for Iowa taxpayers.

As Bleeding Heartland discussed here, it will be important for the governor’s office to demonstrate not only that her staff were spending time on COVID-19 matters, but also that their job duties were “substantially different” from what was normally expected of them. That’s because CARES Act money is designated for “costs that were not accounted for in the budget most recently approved as of March 27, 2020.”

Reynolds did not hire additional staff to handle the pandemic. All 21 people whose salaries were partly covered this way were already employed full-time by her office. Personnel expenses for a chief of staff, deputy chief of staff, communications director, legal counsel, and so on were all accounted for in a budget line item.

Sand recommended redeploying the $448,449 toward pandemic relief efforts “that do not risk a net loss to Iowa taxpayers upon audit, and that more directly help Iowa address the pandemic,” such as:

The governor’s office has yet to answer other questions I’ve raised about the use of CARES Act funds to pay her staff. Bleeding Heartland will follow up on that angle in a forthcoming post.

UPDATE: State Representative Chris Hall, the ranking Democrat on the Iowa House Appropriations Committee, pointed out that Reynolds decided to allocate $21 million from the CARES Act toward the Workday system “AFTER the legislature declined to fund this contract. We held committee hearings and it was not viewed as a worthwhile expense.” 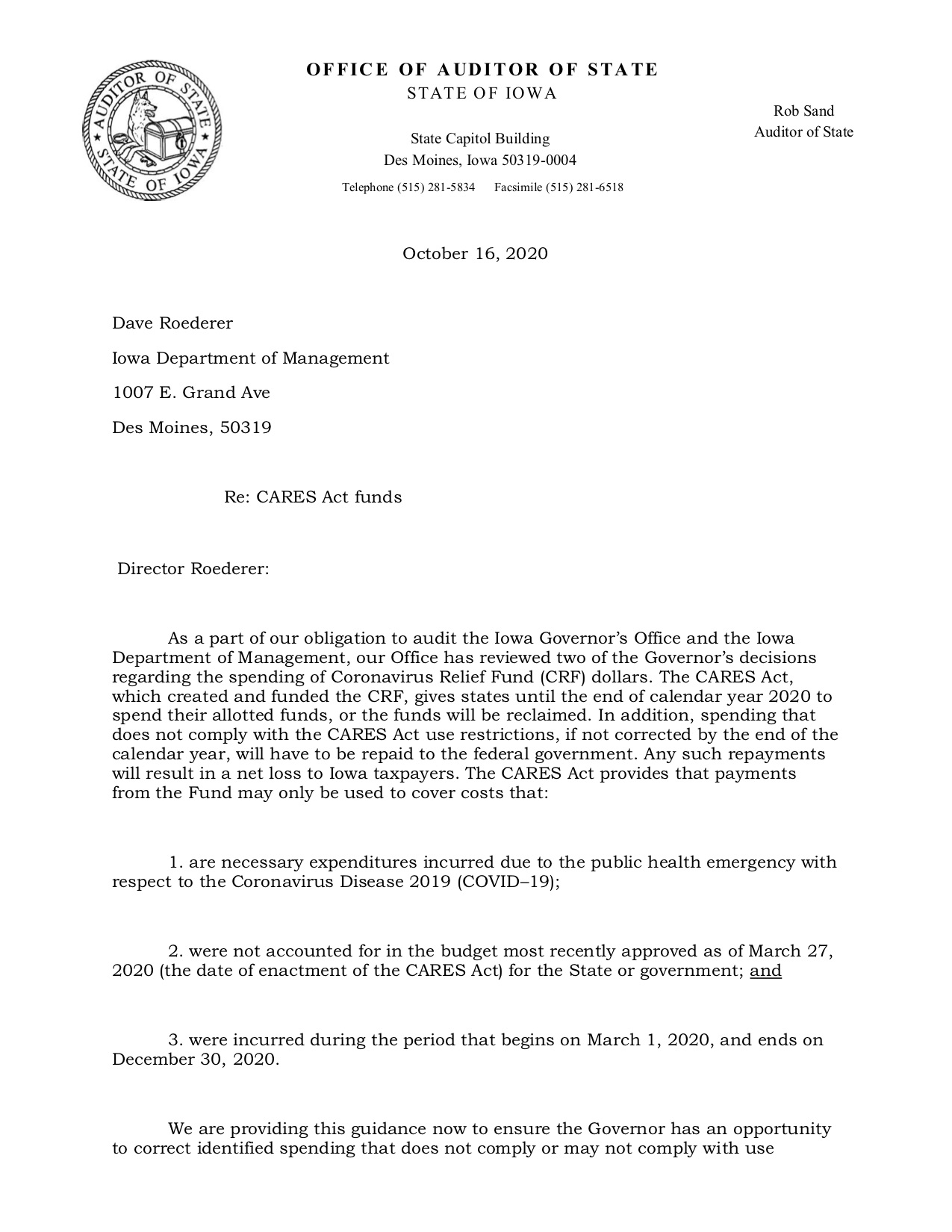 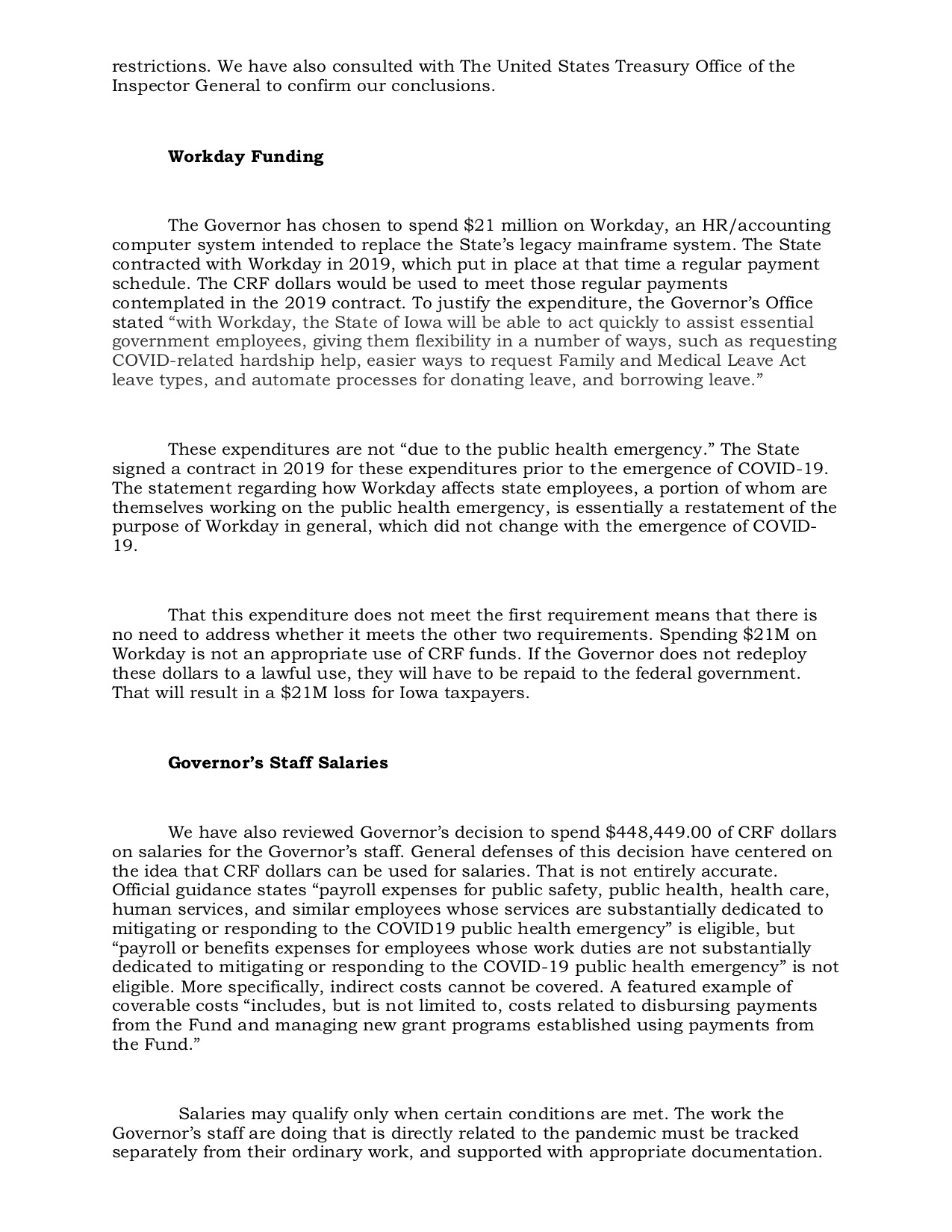 “These findings, discovered during Auditor Rob Sands’ review and confirmed by the U.S. Treasury Department, prove that Governor Reynolds misused more than $20 million of federal funds the state received to fund COVID-19 relief measures that are desperately needed in our state.

“The U.S. Treasury had explicit rules on how this money could be used, and upon examination, it appears those rules were ignored.

“A few months ago, I asked Rob Sand to investigate the use of COVID-19 relief money to fund Workday, an IT project that was already underway before the pandemic.

“Normally, the Senate Oversight Committee would investigate this type of action, but Auditor Sands’ independent investigation is the only option we have at this time. I fully support his critical examination of this misappropriation of taxpayer dollars.

“I urge Department of Management Director Roederer and Governor Reynolds to immediately rectify this situation and use the COVID-19 funding for COVID-19 expenses, not as a supplement to our normal Iowa general fund budget.”

Top image: Screen shot from the video of Governor Kim Reynolds’ September 16 news conference, where she discussed the use of CARES Act funds to pay some of her staff.