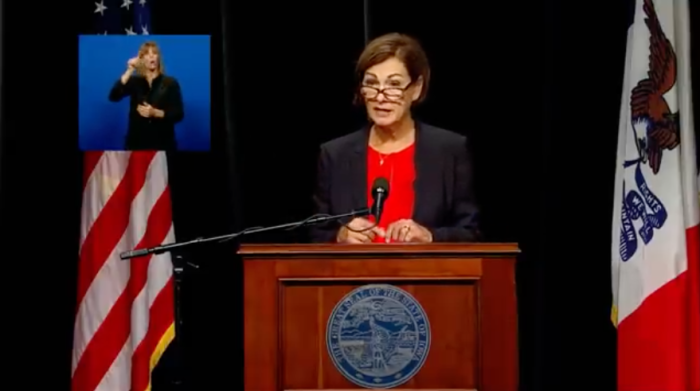 The state of Iowa's contract with Workday to upgrade computer systems "is not an allowable expenditure" under the Coronavirus Aid, Relief, and Economic Security Act (CARES Act), the U.S. Treasury's Office of Inspector General informed Iowa Department of Management Director David Roederer on October 16.

The State Auditor's office released a copy of the letter on October 21. State Auditor Rob Sand announced two days earlier that he had also informed Governor Kim Reynolds and Roederer that spending $21 million on Workday-related costs was "not an appropriate use" of the Coronavirus Relief Fund.

Based on our review, we determined that the contract with Workday is not an allowable expenditure as it does not meet the CARES Act criteria. The contract with Workday for a computer system upgrade was already planned and budgeted for prior to the CARES Act, and as such, does not meet the requirement that “costs were not accounted for in the most recently approved budget as of
March 27, 2020.”

Treasury's Office of Inspector General also concluded that "the system upgrade does not meet the 'necessary expenditure incurred due to the public health emergency' requirement for the uses of funds." Iowa's Office of Chief Information Officer had asserted in communication with federal officials, "Workday will play an integral role in the State’s response to COVID-19 and the demands the pandemic has placed on state government," improving the state's ability to "assist essential government employees" as well as budget forecasting models "that allow for better managing of COVID-19 impacts on state government operations."

But Delmar wrote to Roederer,

While the new and modern Workday system may provide additional functionality, these upgrades are not necessary to address the public health emergency and were already planned before the COVID-19 pandemic outbreak. A reasonable alternative is the continued use of Iowa’s current legacy system. As such, funding the Workday contract with Coronavirus Relief Fund proceeds is not a reasonable, allowable use of funds.

The Office of Inspector General instructed Roederer that any payments already made toward the Workday contract "should be returned to Iowa’s Coronavirus Relief Fund for eligible uses," and additional CARES Act funds "should not be used" for that purpose. He requested a response by October 26, to include "Iowa’s corrective action plan and the estimated date of completion."

The governor's office has not responded to Bleeding Heartland's inquiries about this matter. Roederer confirmed via email on October 20 that he had seen communication from Treasury's Office of Inspector General. Asked whether Iowa will redeploy that $21 million from the Coronavirus Relief Fund for some other use, Roederer replied, "I do not have any additional information."

UPDATE: Reynolds told reporters on October 21 that she believes it's appropriate to use CARES Act funding for the software upgrade, "and so we're going to talk about why we believe that" in a reply to the OIG later this week. Channel 5 news posted the video. Reynolds claimed other governors have asked the federal government to give them more flexibility in how they spend CARES Act money.

State Rep. Chris Hall, D-Sioux City, is the ranking member of the Iowa House Appropriations Committee, which is controlled by Reynolds’ colleagues in the Republican Party.

The panel turned down Reynolds’ request for $21 million in state gambling revenues for the cloud-based Workday accounting and human resources system, which also handles budget documents, Hall said. That decision came because the pandemic-related temporary closures of casinos had reduced the amount the state had in the fund Reynolds had eyed for the software service, he added.

“After the Legislature declined to fund the Workday contract, the governor’s office indicated they would find the money another place (in the state budget),” Hall said. “Instead, they found it in the CARES Act.” [...]

Hall said state lawmakers were unwilling to back Reynolds’ request, which named Workday specifically, in part because the administration didn’t go out for bids.

“The Workday contract raised flags because it circumvented the competitive bidding process,” Hall said. “That process is there to avoid corruption.”

It’s not unusual for the state to approve a no-bid contract a few times a year, perhaps, Hall said. But a $21 million request for a project that turned out to be $50 million over two years almost always would mean going out for bids, he added.

UPDATE: In an October 26 letter to the Office of Inspector General (enclosed below), the governor's senior legal counsel Sam Langholz argued that the expenditure was allowable because the Iowa legislature did not approve funding for the Workday contract.

Your office appears to conclude the opposite—that the “upgrade was already planned and budgeted for prior to the CARES Act”—because the contract was signed on October 30, 2019, for a five-year term. The State concedes that the upgrade was “planned” and contracted for before March 27, 2020. But planning and contracting does not equate with being “accounted for in the budget most recently approved as of March 27, 2020.” These expenditures were not.

The State did use one-time state funds from the Department of Administrative Services’ I/3 internal service fund to pay expenses under the contract with Workday from October 2019 until March 2020. These funds had been allocated by the Department of Administrative Services for the purpose of this technology upgrade. But once this one-time money had been used, there was no other line item, allotment, or allocation that could be used for these expenditures without being a substantially different use than the expected use of the funds.

Langholz also asserted the software upgrade was "necessary due to the public health emergency."

In reaching the contrary conclusion, your office appears to again rely on the fact that the upgrade was already planned. Yet the fact that the State had begun planning for such an upgrade does not preclude the upgrade becoming necessary due to the public health emergency. The urgency and necessity of having remotely accessible and more robust and agile human resources systems and budgeting systems arose because of the public health emergency. And because no other funding was allocated, if the State had not proceeded with using these funds, the need would not have been met despite the prior plans. [...]

True, another governmental official could exercise her judgment to conclude that an alternative, such as what you proposed, would meet the State’s need. But the same could be said about countless allowable expenditures. For example, Treasury FAQs highlight that it could be an allowable expense to reimburse public universities for tuition refunds they issued;10 but one could conclude that a reasonable alternative would be for a university to bear those costs or pass them on in future tuition increases. This alternative does not make it any less reasonable for a Governor to conclude that such a reimbursement is necessary. These are judgment calls. And the Treasury guidance appropriately places those judgements with “governmental officials responsible for spending Fund payments.” In this case, that is the Governor of Iowa.

The State Auditor's Office declined to comment on the governor's justification for the expenditure.
______________

Appendix 2: October 26 letter from Sam Langholz, senior legal counsel for the governor, to the Treasury's Office of Inspector General