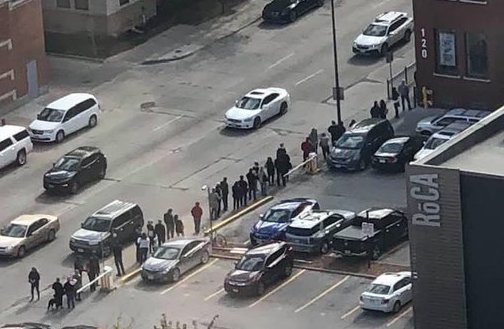 Iowans are voting early in larger numbers than ever, due to the COVID-19 pandemic and high levels of interest in the presidential race.

Democrats have good reasons to feel optimistic about the votes banked so far.

1. Democrats have a larger lead over Republicans in absentee ballots cast than in any previous Iowa election.

These are the latest available figures from the Iowa Secretary of State’s office.

Democrats have cast 135,769 more ballots than have Republicans with nearly two weeks to go.

In other words, if voters from both parties have comparable return rates, Democrats could slightly expand their lead in votes banked.

Election day turnout does typically favor the GOP, but that’s a lot of ground for Republicans to make up on November 3.

3. Most independents who will cast a ballot this year have not done so yet.

Iowans affiliated with neither party have been less likely to vote early in past elections than have Democrats or Republicans, and that pattern is holding this year. In 2016, only 157,048 of the 481,770 no-party voters who cast ballots voted before election day. Similarly, 497,496 independents participated in the 2012 general election, of whom 178,837 voted early.

Iowa’s independents favor Democratic candidates for president and U.S. Senate, according to several recent polls (see here, here, here, and here). So if the bulk of them vote on November 3, Republicans will have a steeper hill to climb to overcome the Democrats’ absentee ballot advantage.

4. Democrats are not merely “cannibalizing” their reliable voters.

Because the COVID-19 pandemic has prompted so many Americans to vote early, some analysts have speculated that early voters don’t represent net gains for Democrats. Rather, they reflect a shift by reliable voters from election day to absentee voting.

TargetSmart’s analysis of early voting shows that of the Iowans who had cast ballots through October 20, an estimated 16.2 percent (92,003 people) did not vote in the 2016 election. 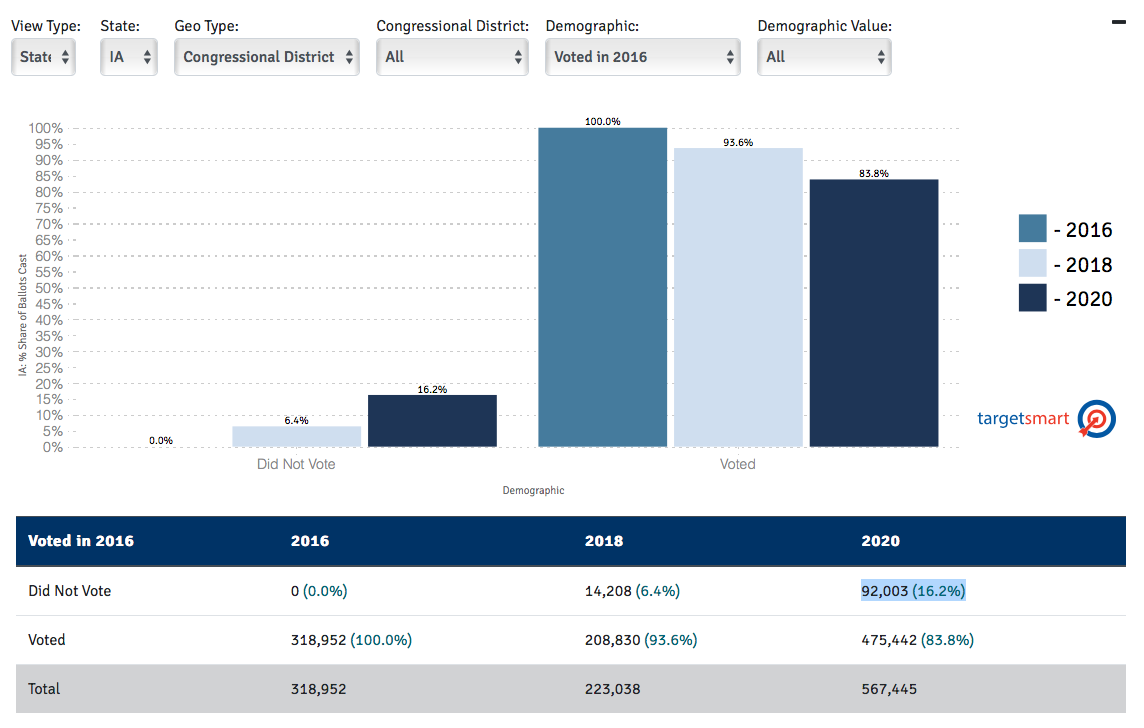 About 26,012 of those were first-time voters. The rest were infrequent voters. 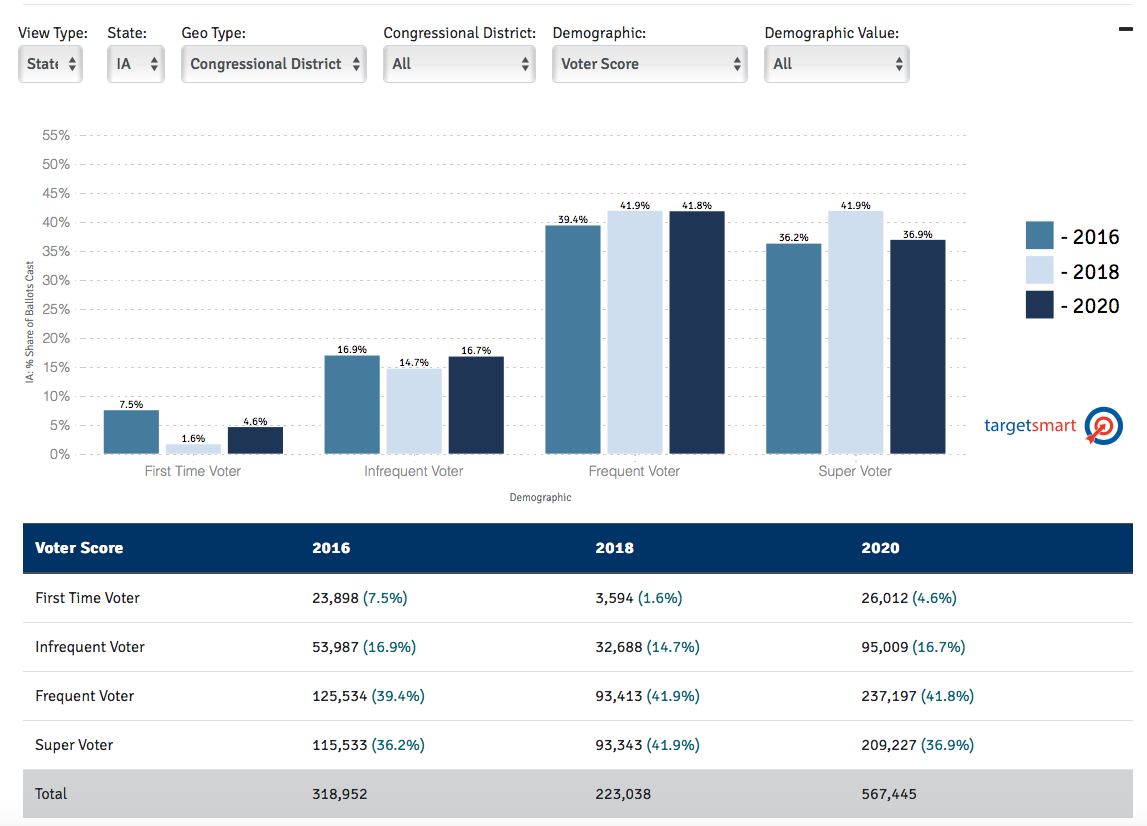 Most Iowans who had voted by October 20 were over age 50. 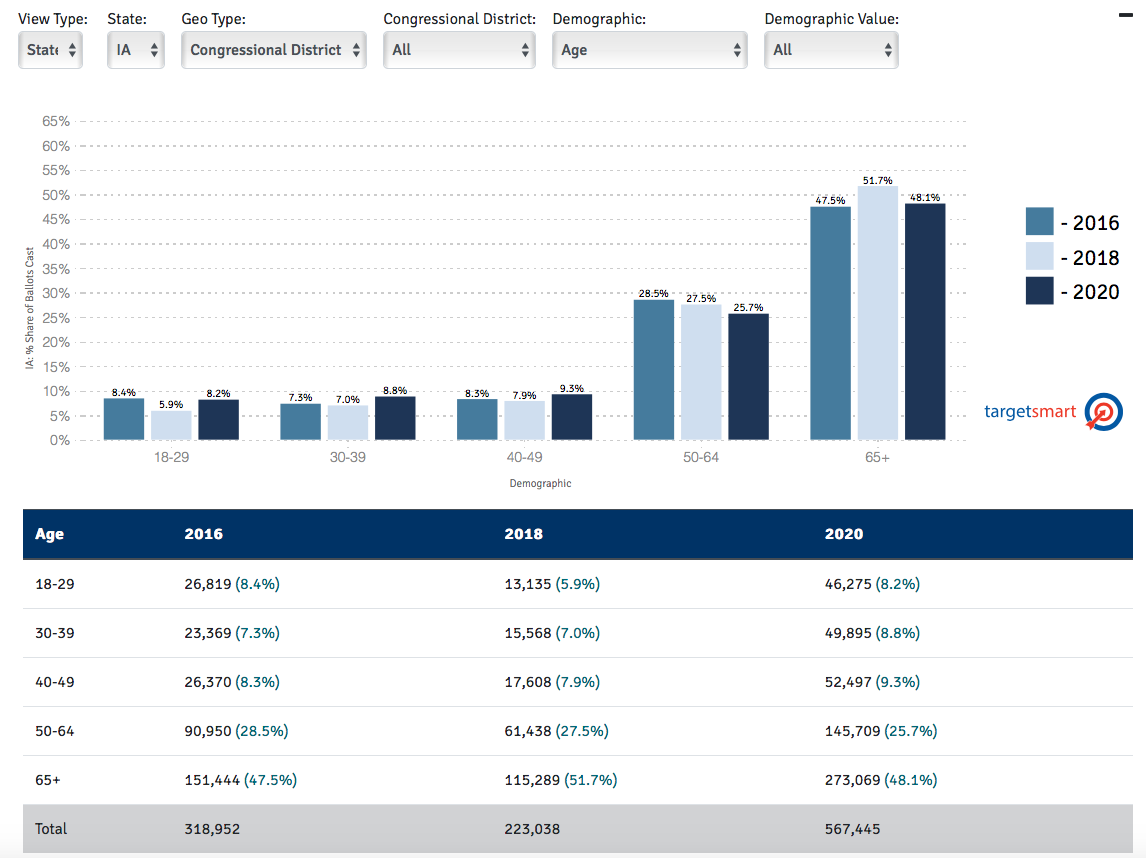 Iowa Democrats will be able to focus much of the late GOTV on younger voters, who are less reliable participants. The large early vote makes that task somewhat easier by shrinking the “universe” who need to be contacted on or shortly before November 3.

Traditionally, high turnout scenarios are thought to benefit Democrats. But the best chance for Iowa Republicans now would involve an enormous election day turnout, which could help them overcome their deficit in absentee ballots. The certified results from 2016 show that Trump received 800,983 (50.63 percent) of the 1,581,371 ballots cast in Iowa. He lost the early vote by 331,964 to 270,900, but more than made up for it on election day.

Signs point to greater interest in this year’s presidential election, but we can only guess how many more voters will participate, compared to 2016. Republicans would probably have a better chance with a total vote exceeding 1.7 million, rather than turnout in the 1.6 million range. On the other hand, if independents break for Democratic candidates, even very high turnout probably wouldn’t save Trump or Senator Joni Ernst.

Absentee ballots requested by Iowa voters as of October 23, 2012

Absentee ballots received by Iowa county auditors as of October 23, 2012