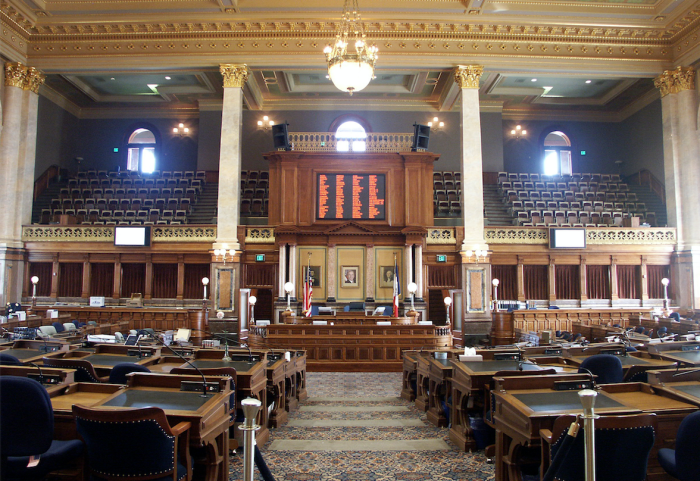 Jon Green is a former mayor of Lone Tree, where he resides. He works in information technology. -promoted by Laura Belin

“I don’t have the same recollection,” he told the Register. “But I am not going to offer any additional context to this, other than to say if someone’s perspective is that it was inappropriate and I crossed a line and I misread a situation in a social setting, I do apologize.”

He declined to comment on or discuss the specific incidents, saying, “I think if I add context it quickly becomes victim-blaming, and I don’t want to go down that path.”

Only a lawyer could find that statement satisfying. While Boulton did drop out of the governor’s race soon after, he retained his Iowa Senate seat.

In exactly the only Do-the-Right-Thing moment of this sordid mess, then-Minority Leader Janet Petersen stripped Boulton of his committee assignments after asking for his resignation.

In politics the only thing harder to do than the right thing, is to continue to do the right thing once it becomes clearly unpopular. Petersen would eventually reinstate some of Boulton’s committee memberships, after the Senate Ethics Committee forgot to put their dentures in and heard Boulton’s case, dismissing it for lack of jurisdiction.

Boulton ran for reelection in 2020 and won after no one opposed him in the Democratic primary, and Republicans failed to field a challenger. ToyA Johnson, a Libertarian, offered Des Moines-area voters an alternative and received almost 23 percent of the vote.

Plenty of blame to go around here. Iowa Democrats should have mobilized to ensure Boulton would not seek a second term, and someone should have stepped up to offer a primary challenge. The GOP could’ve contested the seat. (This is an exceptional circumstance.) But alas.

Were that the end of it, it would be bad enough. But.

“Obviously we saw this year that labor issues—specifically the corporate legal liability law that was passed to give large employers immunity, employers like Tyson—was a big priority for Republicans,” Wahls said. “So as we get ready to go into 2021, we wanted to make sure that we had an attorney who understands this part of the law able to speak to these issues on the Senate floor and in committee. And Boulton is the only labor attorney in the Iowa Senate, and the [Senate Democratic] caucus felt that he was the right person to do that.”

IPR asked if that sends the wrong message to victims and perpetrators of sexual harassment.

“I think the people of his Senate district felt like he was the right person who they wanted to fight for them,” Wahls said, though Boulton had no major party challenger. “I think there may be more work for Nate to do on the question that you just raised, but in terms of him being a member of the Iowa Senate, I think that the view of our caucus was that he would be a good voice on these issues of labor law.”

The Iowa Senate Democratic Caucus is interested in power, not responsibility. Winning a few concessions in labor law might be smart, but doing so by elevating Boulton isn’t wise. “I think there may be more work for Nate to do” is a cop-out, not justice.

Wahls didn’t snap his fingers and put Boulton into leadership. Some majority of the caucus had to agree to do so. But to the best of my knowledge, only one other Senate Democrat has had the gall to attempt a public defense of the indefensible: Rob Hogg.

Second, [Boulton] was sanctioned by our party leader in the Iowa Senate, by losing committee memberships and his status as a ranking member from mid-2018 through 2020.

Third, voters re-elected him to the state senate through both the primary and the general election in 2020.

Fourth, the misconduct took place well before he was elected to the Iowa Senate in 2016.

Fifth, he has attended and completed the Iowa Senate’s annual sexual harassment prevention training. During his service in the Iowa Senate, I have not seen or heard of any harassing behavior by Senator Boulton. He has acknowledged he previously had a problem with alcohol and has given it up.

“First, sexual and other harassment is unacceptable.” That’s it! That’s the statement. It should be a bedrock value of Iowa Democrats. But since the caucus promoted Boulton to leadership, Hogg needed to at least try and explain why those two things aren’t in tension.

All the education and training in the world won’t mean jack if there isn’t something with teeth on the other side of clear infractions. I’d argue the Iowa Senate’s annual sexual harassment prevention training is a joke.

“I have not seen or heard of any harassing behavior by Senator Boulton.” This is insulting, Senator. The absence of evidence, especially if you’re not sleuthing for it, is not evidence of absence.

Boulton has acknowledged “he previously had a problem with alcohol and has given it up.” This, too, reeks.

I know a thing or two about booze. I’ve had two drunken driving convictions, one of them right before I was elected mayor of Lone Tree three years ago. I believe in and am a byproduct of second (and third…) chances. But second chances should require some degree of wrestling with your error. “I don’t have the same recollection.” “But I am not going to offer any additional context to this, other than to say if someone’s perspective is that it was inappropriate and I crossed a line and I misread a situation in a social setting, I do apologize.”

That’s neither an apology nor any sort of introspection.

There’s nothing magic about alcohol. It reveals you. Sometimes that can be terrifying. As if you’re wandering around pressing your erection on women.

Senator Boulton, you are who you are. You can change. I hope you do. But giving up drinking isn’t a get-out-of-jail-free card. As one who’s been: going to jail is the point. Paying the fines is the point. Seeing the therapists is the point.

Accepting responsibility is the point.

The final sad coda to this enraging stew of penis problems is that I’ve got to write this at all. First, the women who have done the reporting: Brianne Pfannenstiel at the Register, Katarina Sostaric of Iowa Public Radio, Laura Belin here, and others I’m sure I’m missing. Second, women also have opinions, by golly: Lyz Lenz wrote a piece on December 16 that goes deeper; Sydney Devine was ringing the bell way back on December 5.

Listen to women, we hear over and over. I’ve said it myself. But this is for those at the way back of the room, where the Iowa Senate Democratic Caucus must be hiding. If you absolutely have to hear it from someone with a dick in their drawers, here I am:

Promoting Nate Boulton to Senate leadership was a grievous mistake, multiplied by your failure to address, let alone correct it. You have undermined Iowans’ confidence in you, in the process (the pro forma anti-harassment training, the Ethics Committee), in the party and in ourselves. How could we have supported you? Now what?

We will each have to grapple to answer the first question. How you govern yourselves will answer the second.

An early draft of this story was presented via email to Wahls, Hogg, and Boulton two days prior to publication, with an invitation to comment or correct.

I am sorry to hear about your drunk driving offenses. I hope no one was hurt, and I am glad to hear you are overcoming your problems with alcohol.

On your essay, I am disappointed it takes my statement to my constituent out of context. As I said, I recognize people want more discussion, and I welcome them to contact me with their thoughts and concerns, including any concerns they want to share confidentially. Constructive dialogue and multiple avenues for reporting are essential if we want to prevent future sexual harassment and create a culture that is safe, diverse, inclusive, and welcoming.

I asked Hogg if he had any additional context he wished to share. I have not heard back from him, or from Boulton, or Wahls, as of publication.