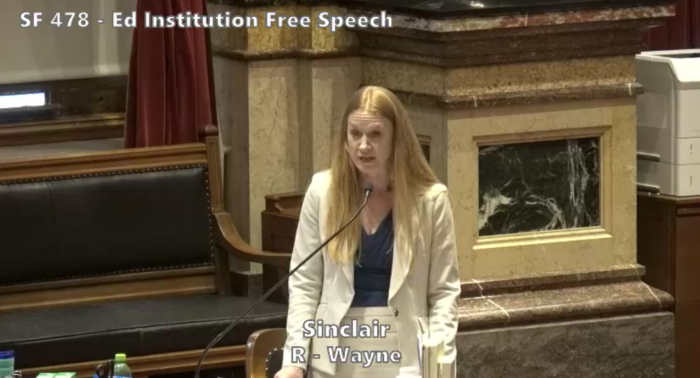 It's all about censorship

Bruce Lear covers a bill that didn’t get much attention this week. -promoted by Laura Belin

But in their never-ending quest to break what isn’t broken, majority Republicans pushed Senate File 478 through the Iowa Senate. This bill masquerades as a free speech, but it actually penalizes professors and teachers who exercise a freedom we hold sacred.

The bill has two parts. The first section requires public colleges, universities, and public schools to provide a mandatory free speech training for all faculty and staff.  On its face, this sounds innocuous, because after all, who doesn’t support free speech? But as always, the devil is in the details.

The reason for the training isn’t quite so harmless.  Republican lawmakers believe conservative ideas are suppressed on college campuses and in public school districts.  So, requiring this training seems the first step in getting back at what they perceive to be ultra-liberal professors and teachers.  That’s also what’s behind banning tenure in Iowa public universities (Senate File 41).

This type of mandatory training is not only an unfunded mandate forced upon already cash-strapped school districts colleges and universities, it blows a hole in any semblance of local control.

Even if you buy into the idea of a liberal conspiracy to stifle conservative speech, you also have to have no faith in local school district school boards, community college boards, and the Iowa Board of Regents. I can say from experience, those boards aren’t filled with raging liberals.

Yes, it’s an unfunded mandate that smashes local control, but the bill is also highly prescriptive on what cannot be covered in the training.  The training cannot include:

“That an individual by virtue of the individual’s race or sex is inherently racist, sexist or oppressive whether consciously or unconsciously.”

“That the state of Iowa is fundamentally racist or sexist.”

The goal of this language is the same as the bill banning the teaching of the 1619 Project supplemental curriculum in history and social studies classes (House File 222, which didn’t make it through the legislature’s “funnel” deadline). It’s really another blatant effort to whitewash history.

Are there even training and trainers who will ignore white privilege, systemic racism, lack of diversity in Iowa, and LGBTQ discrimination? I hope not.

The second part of the bill requires a free speech statement on every public college and university syllabus. Again, this requirement seems harmless on the surface.  But it creates another way to play “gotcha” with professors.

I don’t know about you, but when I was in college, I looked at the syllabus for one reason, and that was to see how much work I was going to have to do. My guess is that’s what the majority of this generation will do too

But there is always an exception. Teachers, you know what I mean. There is always that one student who wants to push the envelope and see if he/she can get under your skin, so they can get mommy or daddy riled up enough to scream over the phone or even sue. This requirement will make that easier.

This is not about free speech. It’s about seeking revenge on what Republicans believe is wrong speech and thought. Like the new law that suppresses voting in Iowa, this one suppresses both thought and speech while damaging local control.