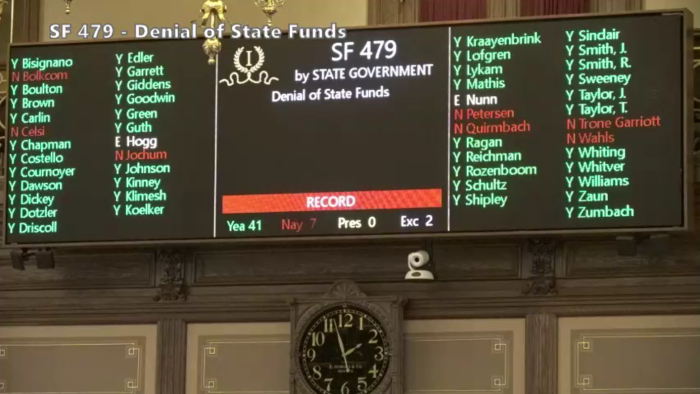 The bill would make local governments "ineligible to receive any state funds" if they reduced a law enforcement agency's budget by a larger percentage than the reduction in the government entity's total budget. While floor managing the measure, Republican State Senator Chris Cournoyer said, "This is not the time to cut funding" for law enforcement. She claimed the bill would "keep our communities and our citizens safe" and asked colleagues to "show their strong support for law enforcement with a yes vote."

This concept grew out of Governor Kim Reynolds' so-called "Back the Blue Act," which combined a ban on racial profiling by Iowa law enforcement with pro-police measures. Republicans in control of the Iowa House and Senate had no interest in addressing racial profiling. However, they have advanced separate legislation to convey their support for law enforcement.

Under Senate File 479, any local government reducing a law enforcement agency budget would have to provide "written justification" to the Iowa Department of Management. Only four circumstances would allow the reduction to proceed without a total loss in state funding:

During the Senate floor debate, which begins around the 1:19:00 mark of this video, Democrats sought unsuccessfully to amend the bill in several ways. Boulton noted that the Des Moines Police Department stands to lose millions of dollars a year under a different GOP bill, which would ban the use of traffic cameras.

Democratic State Senator Herman Quirmbach, a former Ames City Council member, warned that Senate File 479 would produce "unintended consequences." It would discourage cities from increasing their police budgets to pursue pilot projects or other innovations, because committing to any new expenditure would lock in that spending forever. It would prevent efficiency measures other than merging or consolidating services with other departments. Such concerns probably explain why no law enforcement groups (or any other lobbyists) registered in favor of this bill.

Speaking to reporters on March 11, Senate Minority Leader Zach Wahls said his caucus wasn't divided on the substance of Senate File 479. Yet only seven senators had the guts to vote against it: Joe Bolkcom, Claire Celsi, Pam Jochum, Janet Petersen, Quirmbach, Sarah Trone Garriott, and Wahls. Worth noting: Trone Garriott won her 2020 race by the smallest margin of any currently serving senator (164 votes or 0.4 percent of ballots cast). In contrast, six of the Democrats who voted for the bill are in such safe districts that they didn't have a Republican opponent the last time they were on the ballot (Bisignano, Boulton, Dotzler, Taylor, Lykam, and Mathis).

So why did ten Democrats support the bill? Wahls told reporters the legislation was part of a broader GOP effort to "play political games." All Democrats want good policing, he said, but “We had some folks who obviously had concerns in terms of the potential for Republicans to run ads and try to basically turn that upside-down.”

Responding to a Facebook post by a disappointed Black Hawk County Democrat, Dotzler explained, "Democrats are in a deep minority and this bill is designed to do one thing, keep us in the minority." He added that "If you poll our constituents you would find a super majority of them do not support defunding the police and I do not either." In defense of his caucus, Dotzler noted that every Democratic senator voted against a different Republican bill on March 10, which was drafted to target the Black Lives Matter movement and would impose severe penalties on certain forms of protest.

Look, I'm a pragmatist. I understand that elected officials sometimes vote for bad ideas that are popular. But let's get real: Iowa Republicans ran false ads five elections in a row claiming Democratic legislators voted for heated sidewalks. They put the "socialist" label on Democrats who are far from the party's left flank. If GOP strategists see an advantage in accusing someone of hating law enforcement, they'll put that false claim in their direct mail and tv ads. It won't matter who voted for or against Senate File 479.

“We’re going to want to work with local law enforcement,” Grassley said in a Thursday call with reporters. “We don’t want to impact our small communities or communities that may increase their budget, and then just naturally have to reduce it because of the revenue.”

House Minority Leader Todd Prichard told reporters the same day that Republican colleagues had told him the chamber was not planning to take up Senate File 479. He described the bill as "political theater" addressing "a problem that doesn't exist."

Democrats can't stop the majority party from bringing terrible bills to the floor. But they shouldn't reward bad faith legislating with bipartisan support.