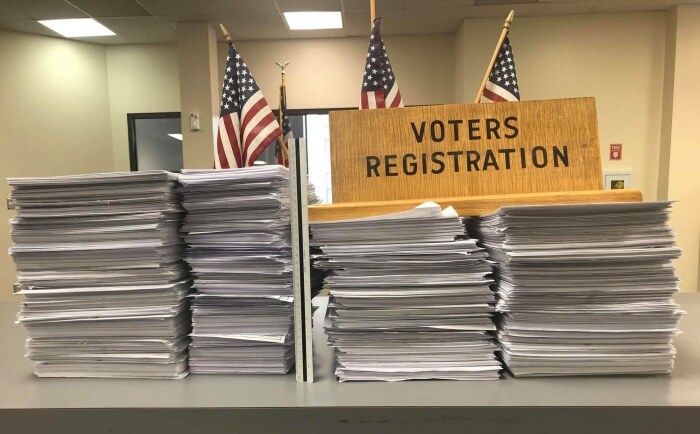 Iowa has a rich tradition of voting integrity, from the way we draw legislative districts, to our access to early voting, election day voting, and ways in which to register to vote. We might call the system the "Iowa Nice" part of the U.S. election system.

Sadly, Iowa's GOP-led legislature recently approved and Governor Kim Reynolds signed yet another bill full of voting restrictions, labeled "voter suppression" by Democrats and hailed as "election integrity" by some Republicans. This comes just a few years after the GOP-led legislature in Iowa passed sweeping voting rights changes and restrictions in 2017.

Republicans across the country have no plan for how to become more competitive in the national popular vote, so they have focused on keeping power by making it harder for those who don't support them to cast ballots.

With no clear path to enact a federal Voting Rights Act, given the Senate filibuster, how can Democrats defend democracy in GOP-controlled states?

How Iowa fits into the national GOP strategy

Republicans enacted a law in 2017, later upheld in court, that restricted voting in many ways. Notably, it reduced Iowa's early voting window from 40 days to 29 and required a voter ID.

Attempts to suppress voting further were mostly unsuccessful during the 2019 and 2020 legislative sessions. But this year, on party-line votes in the Iowa House and Senate, Republican lawmakers passed an even more restrictive bill. Among other things, the law cuts early voting days from 29 to 20, reduces the number of days county auditors can mail ballots, and requires voters to return absentee ballots to their county auditor by election day. (The previous law allowed late-arriving absentee ballots to be counted if they were mailed before election day.)

In addition, the new law prohibits county auditors from sending absentee ballot request forms unless requested by the voter. Iowans who choose to vote on election day will have less time to do so, since polling locations will close at 8:00 pm instead of 9:00 pm. One additional component to this bill moves anyone who did not vote in the last general election to "inactive" status--the first step toward removing someone from the voter rolls.

Republicans in at least 43 other states have proposed new barriers to voting, especially early voting. This past week, Georgia's GOP legislators and governor enacted a bill even worse than Iowa's.

How do these laws help Republicans?

Some Republicans have claimed the new bill will prevent fraud, which historically has been a non-issue in Iowa with fewer than a dozen confirmed cases in the last decade. During the Iowa House and Senate debates, the GOP floor managers argued that the new law reduces the time needed to campaign and reduces the public's annoyance with the length of campaigning. But as plaintiffs argued in a lawsuit filed this month, the new law does nothing to address those issues.

Republicans know that less time for voting means fewer people vote. When turnout is lower, Republicans often benefit. We also know that certain GOP legislators have a vendetta against local government in large, Democratic-leaning Iowa counties. The law creates new criminal penalties that could be used against Democratic county auditors.

Republicans may believe they will benefit from the provisions moving more voters to inactive status, since GOP turnout was nearly 85 percent in Iowa's 2020 general election, compared to just over 80 percent of registered Democrats. also see fewer voters purged from the voter rolls under this law. That could mean more Democrats than Republicans will become "inactive" voters in 2022, and could potentially be removed from the rolls if they fail to vote in 2024.

While many believe no-party voters voters decide Iowa's most competitive elections, only 64 percent of no-party registrants voted in the 2020 general election. Independents are also far less likely to vote in midterm elections than are Democrats or Republicans.

Here's where Iowa Democrats can take our grassroots organizing and capitalize on these new changes and restrictions in 2021 without waiting for 2022, as we prepare for redistricting and a very competitive 2022 general election cycle:

It's long past time that we, as activists and Democrats, hit the pavement and organize a mass re-registration drive across Iowa. We must step up and make sure each and every eligible Democrat, regardless of their current voter status, gets re-registered to vote.

Why? Having spent countless time utilizing voter data, using VAN (the Democratic Party's database), and door knocking, I know our data is outdated. One of the only solutions is to get to work registering and re-registering all eligible Democrats again, at their correct address. This not only ensures that voters are ready to vote in the next election, but it also updates very important contact information. This is our reward for doing the person-to-person grassroots organizing it will take to register and re-register Democrats across Iowa.

Tens of thousands of Democrats who have voted regularly for years at their current address have outdated contact information. A simple example is, many older Iowans when first registering to vote ten or 20 years ago had only a landline phone. But less than 5 percent of Iowans live in "landline only" households now. Many people who once listed their landline as their primary phone number on their registration form no longer have that number.

Since many people didn't provide an email or secondary phone number when originally registering, we often lack accurate data needed to contact Democrats and make sure they have every chance to vote. A stumbling block for Democrats is that many times volunteers or field organizers update the VAN after voter contacts, but no one changes the voter's address on file with the Secretary of State's office. We often hear of activists and volunteers from different campaigns and counties making changes to VAN, but not seeing those changes when volunteering on future campaigns.

In the ever-changing data-driven campaigning of the 21st century, we as Democrats must harness and utilize our full potential when it comes to voter data and how we win future elections.

Where do we start?

2021 is already 25 percent over. With the 2022 election cycle starting, we have no time to waste in making sure each and every Democrat in Iowa is properly and accurately registered to vote. Many county Democratic parties find the "odd/off-year" hard to keep supporters active. This could be a great opportunity to give our dedicated Democrats realistic, achievable goals.

Each county party, and each campaign, has access to their county auditor's voter file as well as access to the Democratic Party's VAN. Those tools can be used to target and find "vulnerable" Democrats: those who have been moved to "inactive" status, people over a certain age, or other groups we need to target to ensure voters are accurately registered.

We can start with the registered Democrats who did not vote in the 2020 general election. We can start a dialogue with these irregular voters on why it's so important to vote and get your voter registration brought up to date.

We also need to meet Democrats where they are. We cannot get complacent sitting in front of storefronts, holding Democratic events, or relying on our secretary of state to grow our party. We must organize and hit the doors of Democrats, instead of waiting for them to come to us.

We can take key successes in recent years to steer our efforts moving through 2021 and into 2022. U.S. Representative Cindy Axne closed the margins in many of her toughest counties by small percentages, which added up to enough to help her secure her first re-election in 2020. She did so by going to the voters. Axne regularly held town halls and spoke to local radio stations and newspapers in some of the reddest parts of her district. She took questions and listened. Her office did hard work securing flood relief along the Missouri River, a traditionally Republican area.

State Representative Kenan Judge of Waukee equates his successful re-election to the Iowa House in 2020 due in large part to his 3,000+ doors he knocked on in 2019, before the pandemic, and in an odd/off-year. We know campaigning has changed due to the pandemic and we also know that the other party disregarded all health and public safety during the 2020 election cycle. This goes to show that when we, and our Democratic candidates go to where the voters are, they win. This also means we must regain our foothold on data and utilizing it to our advantage. Person-to-person campaigning is a key aspect to success and one important factor is how we collect and use data.

It is up to Iowa Democratic Party leadership, all 99 Democratic county parties, and each and every Democratic elected official and candidate to use 2021 to our advantage and update our data. Meeting voters where they are and making sure Democratic activists have the resources to go out and achieve the goal of mass re-registration is crucial as we plan to win in 2022. Grassroots campaigning and activism are the "Iowa Nice" we all need more of, and it will pay off for democracy too.