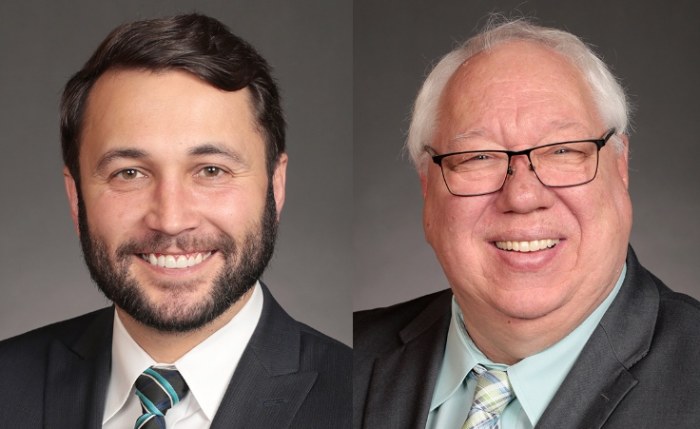 House members approved the amended bill by 95 votes to 2 on the evening of June 11. The Senate took up the bill around 12:45 am on June 13. Following a brief debate, during which three Democratic senators spoke against the House version, senators concurred with the House amendment and approved the bill by 31 votes to 16. However, some of the disenfranchising provisions related to absentee ballots surfaced again on June 14, attached to a budget bill. Bleeding Heartland covered that debate here.

After a contentious debate on June 10, the Iowa Senate approved by 30 votes to 19 a bill including controversial changes to election law. The proposal has drawn extensive local and national media coverage for a provision that would ban Iowa’s secretary of state from sending absentee ballot request forms to any voter who did not request one.

House File 2486 now goes to the lower chamber, where an amendment filed the evening of June 10 suggests Democrats and Republicans have agreed to strip out much of Senate State Government Committee Chair Roby Smith’s handiwork.

House State Government Committee Chair Bobby Kaufman and Democratic State Representative Bruce Hunter filed the new amendment, enclosed in full below. It eliminates most of the Senate-approved version, reducing a 27-page bill to a little more than five pages.

Hunter worked with State Government Committee Republicans last year to craft a compromise on an election bill that ended up passing both chambers unanimously.

Most of the bipartisan amendment to HF 2486 addresses procedures related to selecting presidential electors and alternate electors.

The amendment would not prohibit the secretary of state from sending absentee ballot request forms to the entire electorate. As Bleeding Heartland previously reported, the Iowa Attorney General’s office has said Secretary of State Paul Pate acted within his legal authority when he did so before the 2020 primary.

Instead, the new language states that the Legislative Council, comprised of lawmakers from both chambers, must approve the secretary of state’s “decision to alter any conduct for an election using emergency powers,” adding,

In another conciliatory gesture to Smith, the House amendment preserves language the senator added that would limit county auditors’ ability to consolidate polling places.

Many Iowa county auditors dramatically reduced the number of sites for in-person voting on June 2, since most voters had cast ballots by mail, and the COVID-19 pandemic made it more difficult than usual to find poll workers to staff the sites.

Other provisions axed under the House amendment include:

An amendment Smith submitted on June 10 (before the Senate gave final approval to the bill) struck out several pages of the amendment he had introduced last week, including language that could have forced county auditors to move thousands of voters to “inactive” status after they missed just one general election.

Assuming the House State Government Committee and the full chamber approve the Kaufmann/Hunter proposal, the amended HF 2486 would go back to the Senate. There is no guarantee Senate Republicans will go along with the House version, like they did last year. However, even yesterday it was clear the GOP caucus was not united behind Smith’s effort.

Two Republicans voted against the bill on final passage: retiring Senator Tim Kapucian and Senator Mark Lofgren, who is running for re-election this year in what will be a targeted race. It’s rare for anyone in the majority caucus to defect on a high-profile vote.

I will update this developing story as needed.

UPDATE: Several readers have asked whether this compromise would allow the Legislative Council (where Republicans now hold a majority of seats) to stop Pate from sending a universal absentee ballot request mailing before the 2020 general election. Maybe. However, as discussed here, the secretary of state arguably has the authority to take that step even in the absence of an emergency, under an Iowa Code section giving that official broad authority to “prescribe uniform practices and procedures.”

SECOND UPDATE: Speaking to James Lynch of the Cedar Rapids Gazette, Kaufmann said House Republicans told him “loud and clear that they wanted a bipartisan election bill that made it easier for people to vote.”

“I presented the entirety of the bill to my caucus and the amendment that you see was what was palatable” to House Republicans, Kaufmann said. The message from his caucus members was “we want this to be a bipartisan effort, we want to show the people that we can come together and have a bipartisan legislation that expands voting rights.”

The two dissenting House members were Democrats Chris Hall and Tim Kacena. They represent parts of Sioux City, and the compromise limited the ability of county auditors to consolidate polling places, as Woodbury County’s auditor did before the June 2 primary.

LATER UPDATE: Smith spoke briefly when he brought the amended bill to the Senate floor after midnight on June 13. Democratic Senators Pam Jochum and Janet Petersen urged no votes, arguing that the legislature should not constrain the secretary of state’s powers. State Senator Todd Taylor also spoke against the House amendment, highlighting the limits on consolidating polling places. He represents part of Cedar Rapids and explained that the measure would force Linn County to keep at least 55 polling places open for election day. That would likely be difficult during a pandemic, Taylor argued.

The vote on final passage was 31 to 16, sending the bill to Governor Kim Reynolds. She has not indicated whether she is open to limiting the secretary of state’s authority to change election procedures during an emergency.
__________________

Appendix 2: Amendment containing the text approved by the Iowa Senate, which would be amended by the Kaufman/Hunter proposal