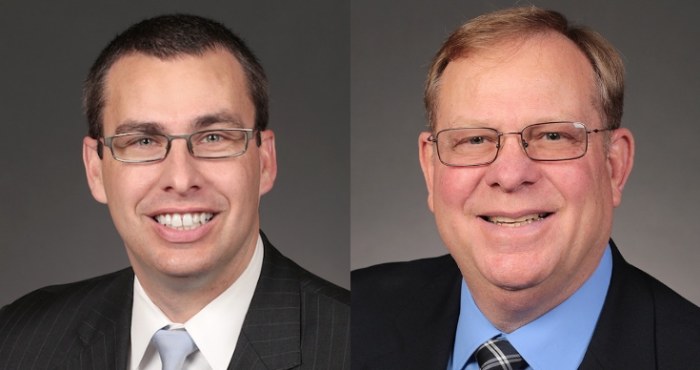 A wide-ranging election bill is eligible for Iowa Senate debate on June 10. Judging by the party-line vote in the State Government Committee on June 5, the Republican majority seems likely to rubber-stamp House File 2486 and send it to the Iowa House.

State Senator Roby Smith proposed many bad ideas in his 30-page amendment to that previously innocuous bill. The most controversial would prevent Republican Secretary of State Paul Pate from sending an absentee ballot request form to any voter who did not ask for one. Pate's decision to send such forms to every registered Iowa voter contributed to record-setting turnout for the June 2 primary.

Smith has denied he is trying to suppress voting by mail. But talking points he and a Republican ally floated in recent days do not withstand scrutiny. Pate didn't need lawmakers to appropriate state funds for the mass mailing, didn't need legislative approval to send the forms, and didn't exceed his authority under Iowa law.

Erin Murphy of Lee Newspapers paraphrased Smith as saying "the ban on such actions was necessary because the Legislature did not appropriate funding for it, and because duplications occurred in some counties where local elections officials also sent out absentee ballot request forms."

Republican State Senator Michael Breitbach, who chairs the Senate Appropriations Committee, expressed a similar view in a letter to some of his constituents over the weekend. Bleeding Heartland obtained a copy of the letter, and I've enclosed the full text at the end of this post.

Pate's office "does not have a sufficient budget to fund" the mass mailing of absentee ballot request forms, which cost about $500,000 before the primary, Breitbach asserted. The legislature would "have to come up with additional funding" to pay for a similar mailing before the general election.

The CARES Act Congress approved in March provided for "new Help America Vote Act (HAVA) emergency funds, made available to states to prevent, prepare for, and respond to the coronavirus for the 2020 federal election cycle."

The secretary's April 8 letter to the U.S. Election Assistance Commission explained his plans for the $4.86 million Iowa was requesting.

We will use the funds to prevent, prepare for, and respond to coronavirus, domestically or internationally, for the 2020 Federal election cycle. To address the effects of the coronavirus on the 2020 election cycle, we intend to encourage voters to utilizes [sic] Iowa's no excuse absentee voting process and purchase personal protective equipment and cleaning supplies to be used at polling places.

Why Senate Republicans seem to think Pate was spending money he didn't have is unclear. Neither Smith nor the Secretary of State's office responded to Bleeding Heartland's requests for comment.

Second we have been informed that our current laws do not give the Secretary of State, even in an emergency, the power to make this mailing. I know a lot of people feel it was a good decision but it does not follow our election laws. To allow the mailing the Legislature would have to take some kind of action to do it again in the fall.

Breitbach is not an attorney, nor does he serve on the Senate State Government Committee.

Who "informed" him and his Republican colleagues that Pate was acting outside his legal authority? Not the Iowa Attorney General's office, communications director Lynn Hicks told Bleeding Heartland.

Secretary Pate has emergency authority under 47.1(2) and Admin. Rule 721.21.1 to make modifications to election procedures in the event of a natural or "other disaster." Our office believes his actions were not only legal, but were also the right response to keep voters, precinct election officials, and volunteers safe and allow record participation in the primary.

The state commissioner of elections may exercise emergency powers over any election being held in a district in which either a natural or other disaster or extremely inclement weather has occurred.

Under the emergency powers, the SoS may make “reasonable and prudent modifications that will permit the election to be conducted.” 721 IAC 21.1(4). “Other disaster” is defined in administrative rules to mean “an occurrence caused by machines or people, such as fire, hazardous substance or nuclear power plant accident or incident, which threatens the public peace, health and safety of the people or which damages and destroys public and private property.” 721 IAC 21.1(1).

I think most reasonable people would consider a pandemic to be a disaster. Certainly, the Governor does because she has issued several “public health disaster emergency” proclamations related to COVID-19. And, mailing an absentee request form is a reasonable modification to allow the election to be held.

Dickey argued that even in the absence of a disaster, Pate's statewide absentee ballot request mailing would be allowed under code section 47.1(1).

I do not believe the code expressly authorizes the SoS to mail absentee request forms to every voter. It doesn’t expressly prohibit either. The fourth sentence in section 47.1(1) give[s] the SoS pretty broad authority to “prescribe uniform practices and procedures.” I think most users of the English language would conclude that mailing an absentee request form statewide to every voter is a “uniform practice and procedure.”

As for the idea that no statewide mailing can go out without legislative approval, Dickey said,

The Secretary of State has inherent authority to send a request out to all voters in his statutory mandate to “prescribe uniform election practices and procedures.” And, if the pandemic is still occurring, he certainly would have emergency authority.

Dickey noticed a contradiction in Breitbach's logic as well. On the one hand, the Republican asserts “our current laws do not give the Secretary of State, even in an emergency, the power to make this mailing.” But near the end of the letter, he claims, "The biggest thing to remember is if the legislature takes no action there can be no automatic absentee ballot request forms sent out in the fall."

UPDATE: Please contact Laura Belin to share other examples of Republican lawmakers making inaccurate claims to support this proposal. For example, GOP State Representative Brian Lohse asserted in a June 6 email to a voter, "Secretary Pate exceeded his authority without any consultation with the Legislature or Governors office."

SECOND UPDATE: The Iowa Senate approved the amended bill on June 10 by a party-line vote of 30 to 19.

There is a lot of misunderstanding in the public about what is going on with mailing out of absentee ballot request forms. In March or April the Secretary Paul Pate made the decision to mass mail absentee ballot request forms to primary voters at an extra cost of about $500,000. In the past this form needed to be requested. There are a couple of items the legislature will have to address because of this. First his office does not have a sufficient budget to fund this, he did it for the primaries and we would also have the cost for the fall election. Second we have been informed that our current laws do not give the Secretary of State, even in an emergency, the power to make this mailing. I know a lot of people feel it was a good decision but it does not follow our election laws. To allow the mailing the Legislature would have to take some kind of action to do it again in the fall. If we make this change we will have to come up with additional funding to pay for the mailing.

Most people forget all of the mailings that come to us during the fall campaign season. All political parties spend millions of dollars to get their voters to the pols. They identify voters that they feel will vote for their candidates and make sure they mobilize them. When door knocking, if a [sic] they find a person that supports the candidate they represent, most campaigns will give them an absentee ballot request form. They will even offer to help them fill it out and return it to a polling site to request the ballot. In this situation the state incurs none of the upfront cost because the door knocker pays to have the forms printed, delivers to the voter and takes it to the courthouse to request the ballot.

The biggest argument against sending the forms out in mass will probably be cost. People can down load the form, they will probably get several from the party they are registered within the mail and more than likely they will have one dropped off at their door during the campaign. I know door knocking will probably be different this year. Rather than actually knocking on the door to have a face to face with voters campaigners will probably hang information on door knobs. If the virus is not as much of a threat in the fall many people may prefer to go to their polling place.

The biggest thing to remember is if the legislature takes no action there can be no automatic absentee ballot request forms sent out in the fall.

I hope this clears up some of the information that is being published.