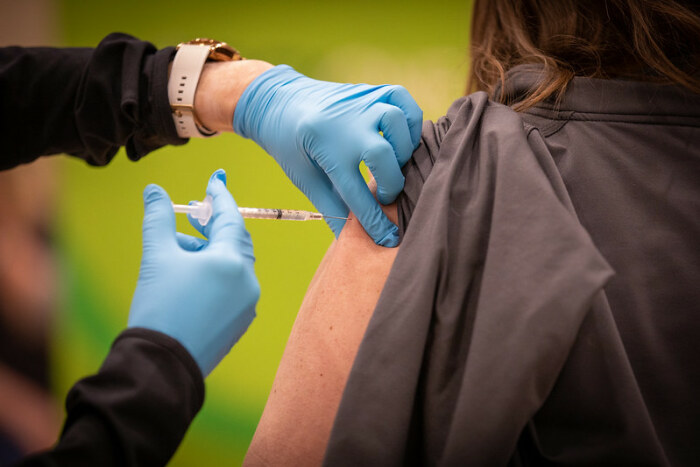 As Iowa prepares to expand COVID-19 vaccine eligibility to all adults on April 5, racial and ethnic disparities in the state's vaccination rates have narrowed slightly since Bleeding Heartland last reviewed this data four weeks ago. However, people of color have still received far fewer vaccine doses per capita, compared to white Iowans.

At least 1,588,117 COVID-19 vaccine doses have been administered to Iowa residents, according to the state's vaccination dashboard on April 4. At least 662,885 Iowans have received all required doses of a COVID-19 vaccine (that is, two shots of the Pfizer or Moderna vaccines, or a single shot of the Johnson & Johnson vaccine). Another 368,646 Iowans "have received one dose of a two-dose COVID-19 vaccine series, but have not completed the series."

Breaking down the numbers by race and ethnicity, it's apparent that Iowa has a long way to go to achieve equity in vaccine distribution.

Per capita vaccinations still far higher for white than Black Iowans, and for non-Latinos compared to Latinos

The state's website provides data on total doses administered for various racial and ethnic groups. Here are the latest numbers, as presented on coronavirus.iowa.gov: 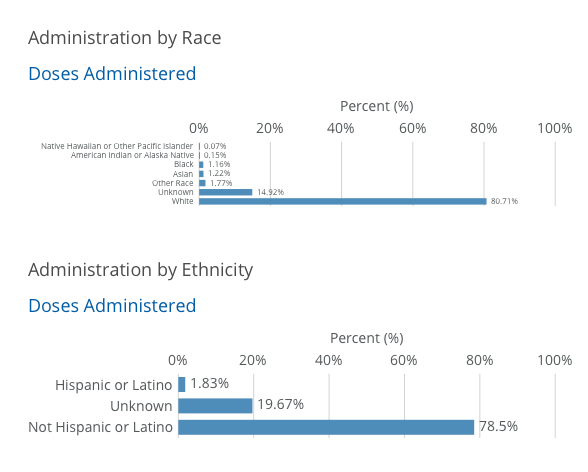 To understand potential disparities, though, you need to know not only absolute numbers of vaccine doses administered, but how those correspond to the population of various demographics. Sara Anne Willette’s Iowa COVID-19 Tracker website continues to be an indispensable resource in this regard.

Her latest calculations, based on data downloaded on April 4, indicate that:

In early February, the data showed Black Iowans had received less than half as many doses per capita as white people. The disparity had grown to more than 3 to 1 by early March. Now the gap is shrinking, but still wider than what Willette calculated two months ago.

In early February, Asians and Native Americans had been vaccinated at about half the rate of white Iowans. Those gaps widened over the following month. But recent outreach to Iowans of Asian descent seems to have been effective, because Asians went from below 40 percent of the vaccination rate for white Iowans in early March to about 56 percent now. However, Native Americans are still being vaccinated at below 50 percent of the per capita rate for white Iowans.

Native Hawaiian or Pacific Islanders had received about 60 percent as many COVID-19 vaccine doses per capita as white Iowans in early February. By March, Willette's calculations showed Iowans in those groups had received less than half as many doses as white Iowans. But the situation has improved: now Native Hawaiian or Pacific Islanders have received about 302 vaccine doses per 1,000 people, which is roughly 65 percent of the vaccination rate for white Iowans.

Four weeks ago, Willette's data showed a 4 to 1 disparity for vaccination rates of non-Latino Iowans, relative to Latinos. Now the disparity is a little less than 3 to 1.

The Iowa Department of Public Health directed tens of thousands of single-shot Johnson & Johnson vaccines in March to counties containing significant populations of "frontline essential workers in food, agriculture, distribution, and manufacturing sectors, and who live or work in settings that make social distancing unfeasible." That initiative may have begun to reduce the disparities, since people of color disproportionately work in some manufacturing settings, especially in agriculture and food processing.

The state public health agency is also trying to reach more Iowans who lack internet access by expanding COVID-19 vaccination scheduling over the phone. Iowans over age 65, or adults under 65 with underlying health conditions, can reach vaccine navigators by dialing 211 or (800) 244-7431, seven days a week from 8:00 a.m. to 5:00 p.m. Translation services are available for non-English speakers.

As appointments become available to all Iowa adults on April 5, it will remain important to reach out to those who lack cell phones or internet connections, or whose work schedules don't permit spending hours scouring vaccine hunter websites or social media feeds. Now is an excellent time for internet-savvy Iowans to contact friends, relatives, or neighbors in high-risk groups to see if they've gotten their shots.