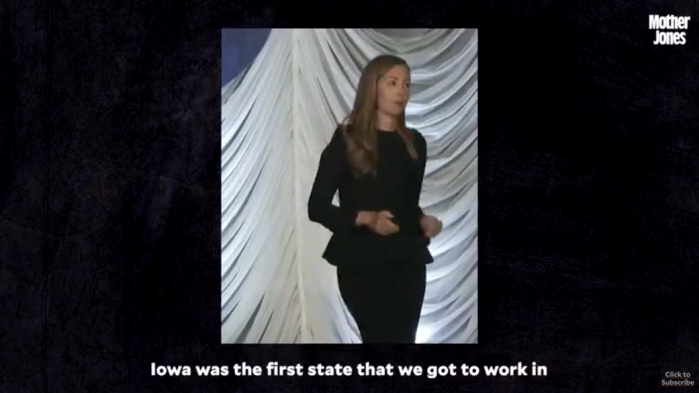 A leading Republican author of Iowa's new election law has denied that Washington, DC-based Heritage Action for America helped write or pass any part of the bill.

In a leaked video obtained by Documented and published by Mother Jones on May 13, Heritage Action's executive director Jessica Anderson claimed the group worked "quickly" and "quietly" on the bill Governor Kim Reynolds signed in March, which limits voting in many ways.

State Representative Bobby Kaufmann, who floor managed Senate File 413 in the Iowa House, told Bleeding Heartland in a May 13 telephone interview, "Any insinuation by Heritage that they had anything to do with this bill is a bald-faced lie."

Ari Berman and Nick Surgey broke the news about the explosive video, recorded during a presentation by Anderson to Heritage Foundation donors in April.

From Berman's and Surgey's report for Mother Jones:

"Iowa is the first state that we got to work in, and we did it quickly and we did it quietly,” Anderson said. “We worked quietly with the Iowa state legislature. We got the best practices to them. We helped draft the bills. We made sure activists were calling the state legislators, getting support, showing up at their public hearings, giving testimony…Little fanfare. Honestly, nobody even noticed. My team looked at each other and we’re like, ‘It can’t be that easy.’”

A slide shown to donors during Anderson's presentation cited three "Heritage priorities" that were included in Senate File 413: "Verify accuracy of list," "Cross reference voter records with other states," and "Remove inactive and ineligible voters." (Iowa's Secretary of State's office recently moved about 294,000 voters to inactive status, following changes to state law; that action erroneously swept up some registrants.) 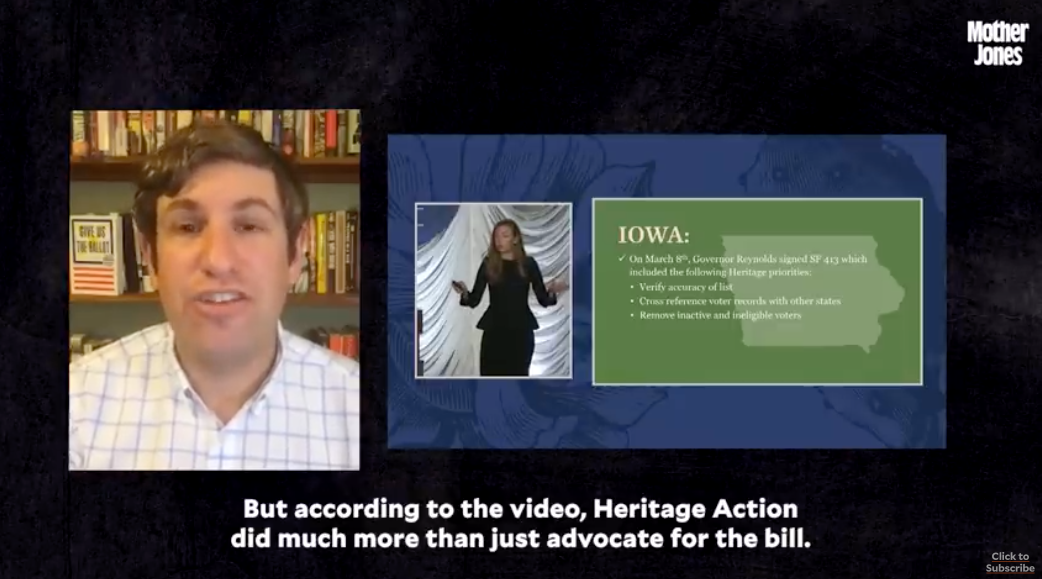 Kaufmann worked extensively on Senate File 413 with State Senator Roby Smith, the lead architect of most recent Iowa Republican efforts to restrict voting. Kaufmann told Bleeding Heartland, "I have had zero conversations" with Heritage Action and "have seen zero pieces of their language, if it even exists." He said he had received no phone calls, emails, texts, or social media messages from the group, "literally zero with a capital Z interaction with them. Any inference that they had anything to do with this bill is a bald-faced lie."

In the video, Anderson referenced Heritage Action's "sentinel" program of training supporters to advocate for bills directly with lawmakers or "give them the model legislation so it has that grassroots, from-the-bottom-up type of vibe.”

I asked Kaufmann whether he might have heard from people who had some connection to Heritage Action, unbeknownst to him. He said it was possible Iowans emailed him asking for an election bill, but as far as specific provisions later included in Senate File 413, "that is also an unequivocal zero."

What about the language moving Iowans to inactive status more quickly, after missing just one general election? Kaufmann said,

Their claiming credit for it is a lie. All of that language came from numerous meetings between Senator Smith and myself [...]

We came up with all of that language based on our years of working on election law. They had nothing to do with the voter rolls, inactive status on my end. Absolutely zero. Not a little, not a tiny bit, zero.

Others who advocated for the bill also were unaware of Heritage Action's involvement.

Berman and Surgey quote Anderson as saying in the video, “We’re working with these state legislators to make sure they have all of the information they need to draft the bills,” and in some places, “we’ve also hired state lobbyists to make sure that in these targeted states we’re meeting with the right people.”

Iowa's legislative website shows no lobbyist representing Heritage Action. The group has not registered a position on any legislation in this state.

As with several high-profile Republican bills, a broad-based coalition of about two dozen organizations registered against the voting restrictions, while a much smaller number lobbied for them. Only three entities registered in favor of Senate File 413: the Florida-based Opportunity Solutions Project, the Iowa Minuteman Civil Defense Corps, and the Kirkwood Institute, a nonprofit registered in Altoona.

Opportunity Solutions Project's Iowa lobbyist Andy Conlin said in a telephone interview that as far as he knows, the organization he represents is in no way affiliated with or supported by Heritage Action for the purpose of Iowa's election bill. "In the time that I spent working on the bill, I never interacted with Heritage Action or heard of them interacting with legislators."

Robert Ussery, state director for the Iowa Minuteman Civil Defense Corps, said in a telephone interview he had no contact with Heritage Action or any other national group on the election bill or any other legislation.

Kaufmann mentioned that if Heritage Action was not registered on the bill, but now claims to have lobbied for it or provided model language to legislators, "not only are they bald-face lying, but potentially implicating themselves in an ethics violation." Iowa House ethics rules require organizations attempting to influence state lawmakers to register their positions on bills.

The day after Reynolds signed Senate File 413, prominent Democratic election attorney Marc Elias filed suit in state court representing the League of United Latin American Citizens. That lawsuit challenges many provisions, most of which Heritage Action is not claiming credit for. But the court filing did mention the accelerated process of moving Iowa voters to "inactive" status, which "may ultimately result in their removal from the voter rolls."

UPDATE: Many readers have expressed doubt that Republican lawmakers or lobbyists would acknowledge any role played by Heritage Action. Wouldn't they have incentive to deny an outside group was pulling the strings on this or any other bill? It's reasonable to be skeptical, since Iowa Republicans have passed some model legislation drafted by national organizations such as the American Legislative Exchange Council.

By the same token, Anderson has incentive to exaggerate her group's influence in Iowa, as a way to impress the Heritage supporters who bankroll her activities. So I would caution against assuming everything she said at a private donor meeting must be accurate.

SECOND UPDATE: Kaufmann has spoken to several reporters but Smith has not commented publicly on whether he communicated with Heritage Action while drafting election bills. In a May 14 news release, Iowa Senate Democrats called on Smith to disclose any conversations he had with the group or its representatives and any campaign contributions he has received from anyone connected to Heritage Action.

"I feel confident in saying that no one from Heritage was a part of any piece of that legislation," he said Friday. "I think the accountability and the question for them would be they’re either lying to impress their donors or they’re in a situation where they’re potentially in violation of the House ethics rules."

Heritage Action said in a statement on May 14 that the group “is proud of our work to make it easier to vote and harder to cheat. That work begins at the state level through our grassroots and continues in state legislatures throughout the country.”

The statement added, "Thanks to the hard work of the Iowa legislators who advanced this legislation and grassroots Americans who supported them, Iowa swiftly passed a strong election reform bill and kicked off the nationwide grassroots movement to save our elections."

The Des Moines Register's Stephen Gruber-Miller noted, "A spokesperson for Heritage Action did not immediately detail what actions the group took in Iowa to advocate for the election law and did not respond to Kaufmann's comments about potentially violating the state's lobbying rules."

THIRD UPDATE: Late in the day on May 14, Smith provided a statement to the Des Moines Register.

"The Heritage Foundation had no part in the drafting of SF 413. I worked with Rep. Kaufmann, other legislators and constituents to draft this election reform proposal," Smith said. [...]

"In fact, a number of the policy provisions in SF 413 were also in previous pieces of legislation long before the Heritage Foundation even knew to take credit for something they did not do," he said in the statement.