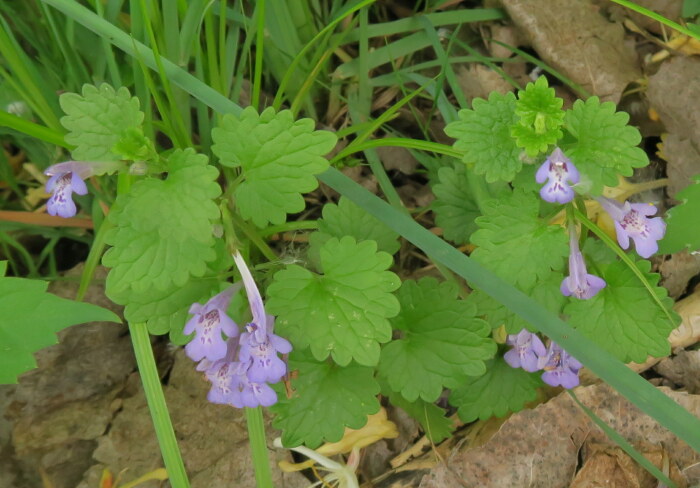 My editorial bias is to feature wildflowers that are native to Iowa or at least to North America. But I make some exceptions for non-native plants that are prevalent here.

Ground ivy (Glechoma hederacea), more commonly known as creeping Charlie, is an invasive species with origins in Eurasia. European settlers brought these plants to this continent, probably for use in creating medicines. According to the USDA's Forest Service website, this species was reported in Indiana as early as 1856 and in Colorado in 1906, "suggesting its westerly introduction and/or migration did not occur recently."

Most Iowans who are familiar with creeping Charlie know it as a "common lawn weed problem." The University of Illinois Extension notes,

Shady lawns with poorly drained fertile soil are typical sites for ground ivy to develop into a major problem. This plant may form extensive patches as it creeps along the soil and moves into sunny areas.

I would suggest either digging out these plants (makings sure you get the whole roots), or learning to live with creeping Charlie. Many kinds of bees visit the flowers, and other insects feed on the foliage. I took most of the pictures enclosed below in my Windsor Heights yard or in partly shaded areas near North Walnut Creek.

The Illinois Wildflowers and Minnesota Wildflowers websites provide botanically accurate descriptions of ground ivy, which forms "a low-growing mat of stems and leaves across the ground" before tubular flowers (usually purple) bloom in the spring and early summer.

The scalloped edges on the leaves are distinctive. 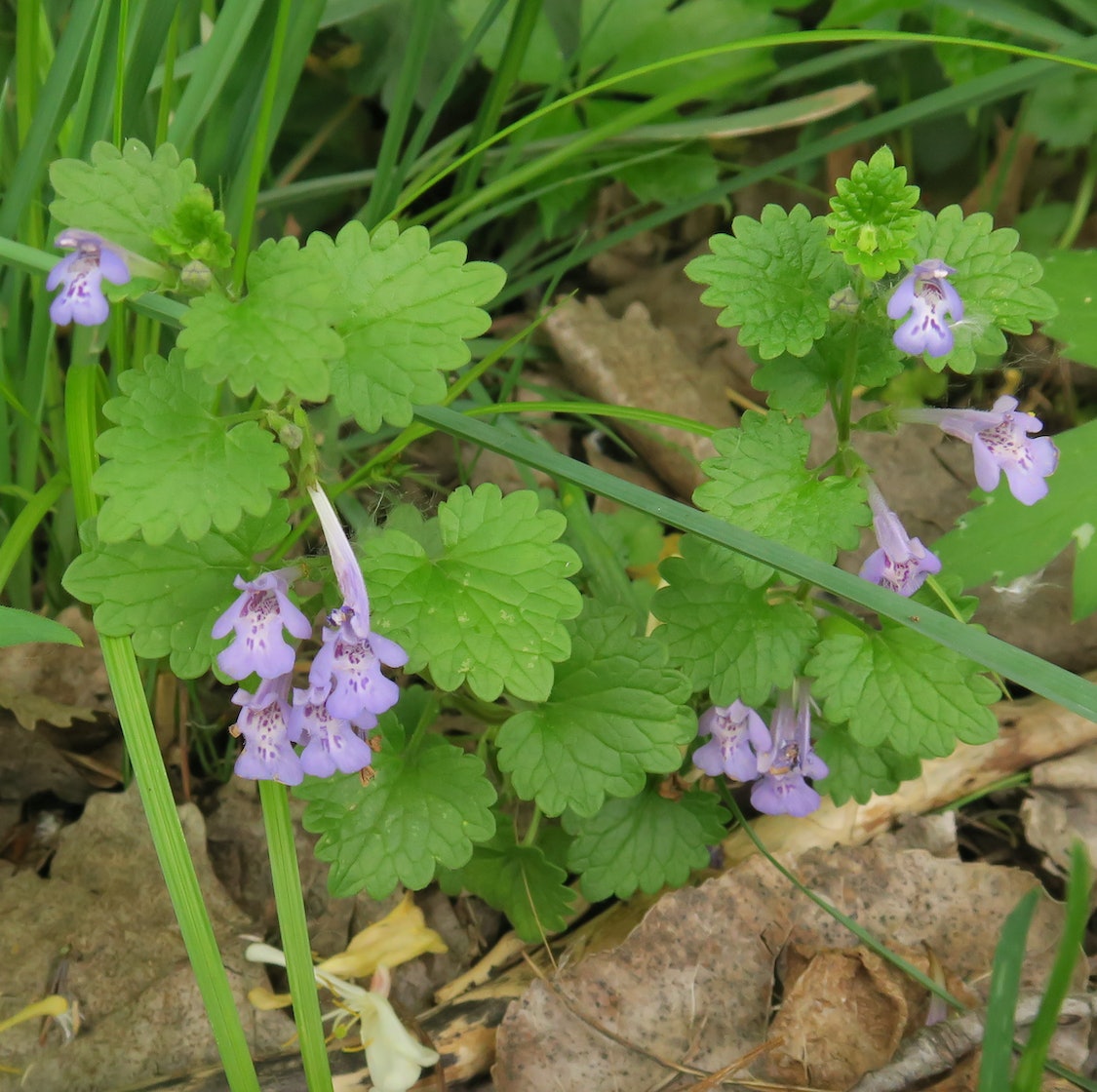 Katie Byerly gave me permission to publish the next two pictures, which she took in early May in northeast Iowa. 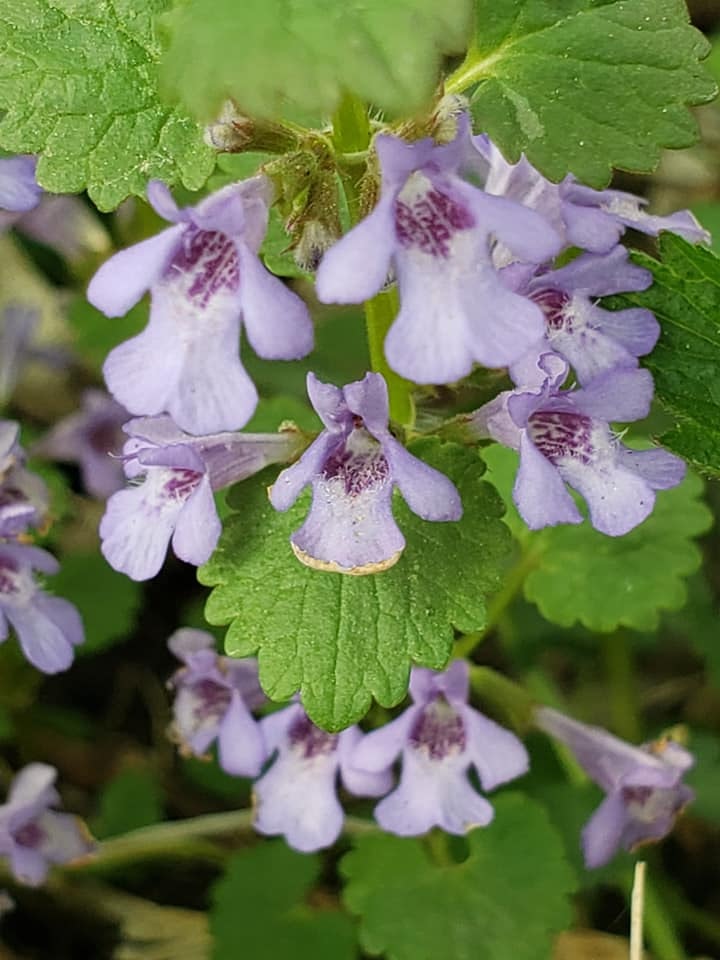 Kim El-Baroudi photographed one of those "extensive patches." 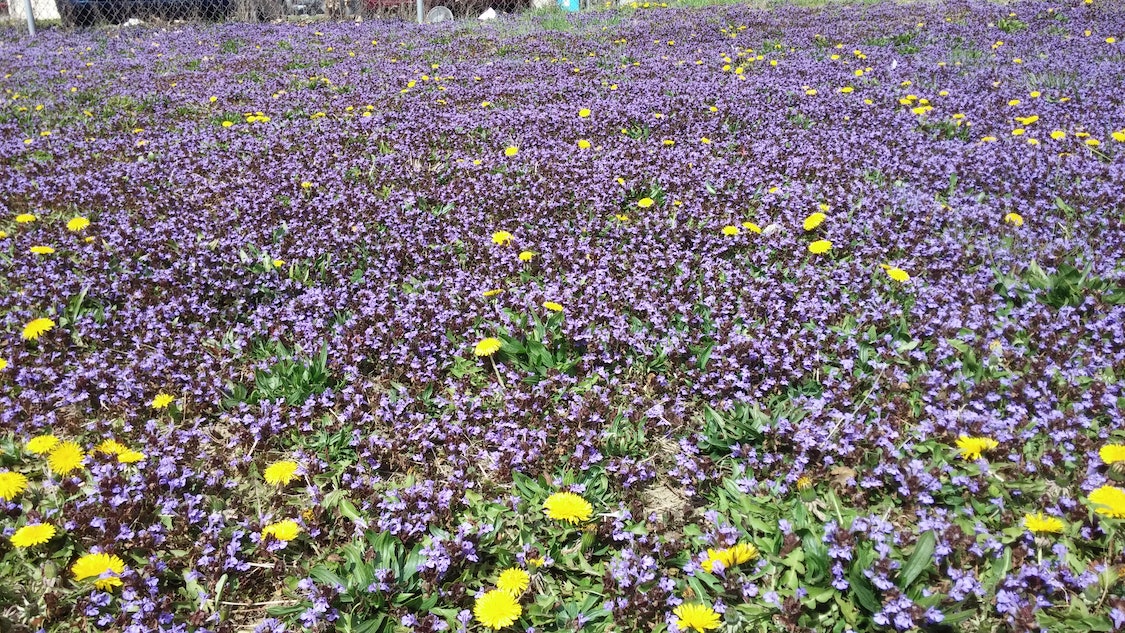 "Within the throat of the corolla, there are fuzzy hairs," Illinois Wildflowers notes. You can see them in this close-up by Kim. 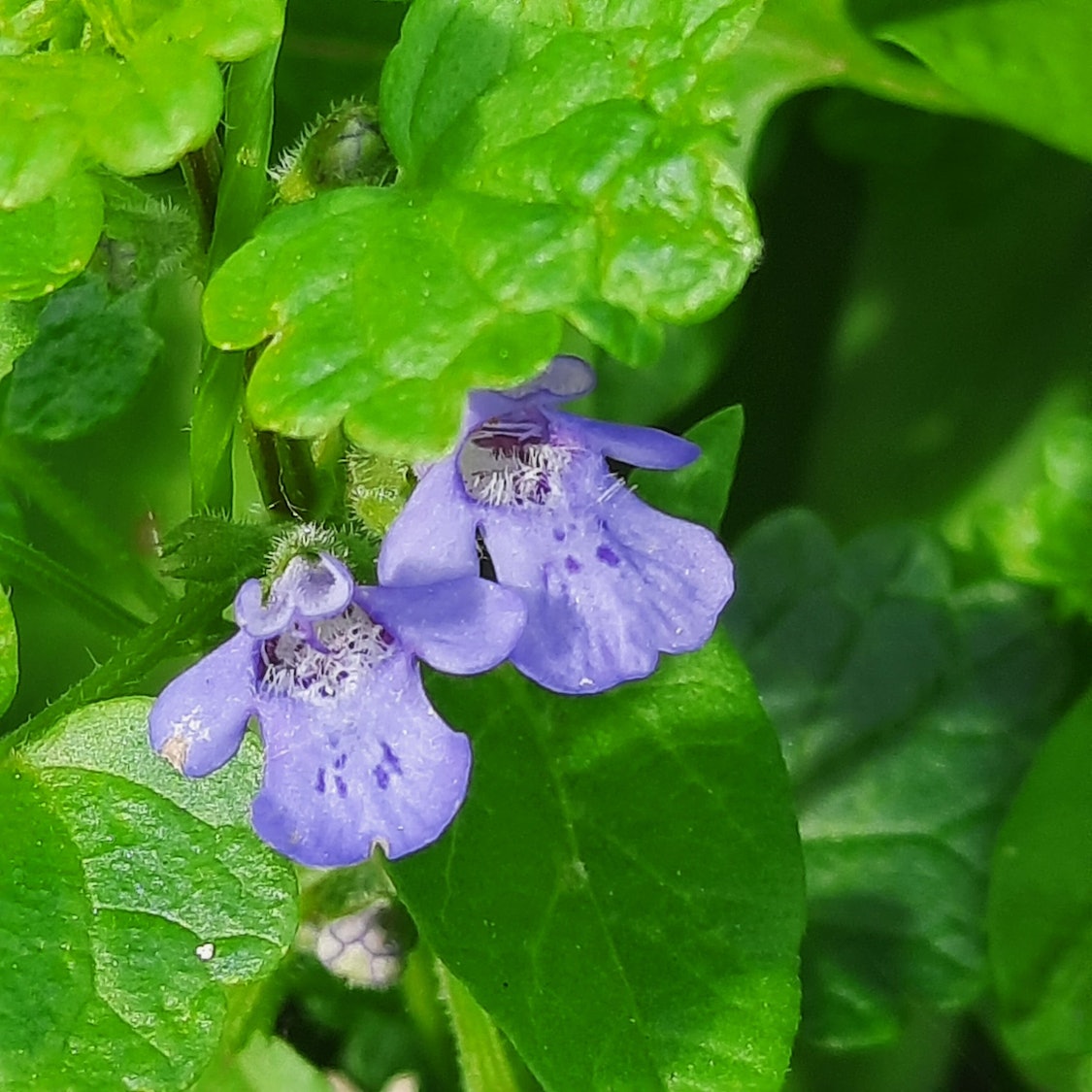 Here's a side view of the flowers, also by Kim. 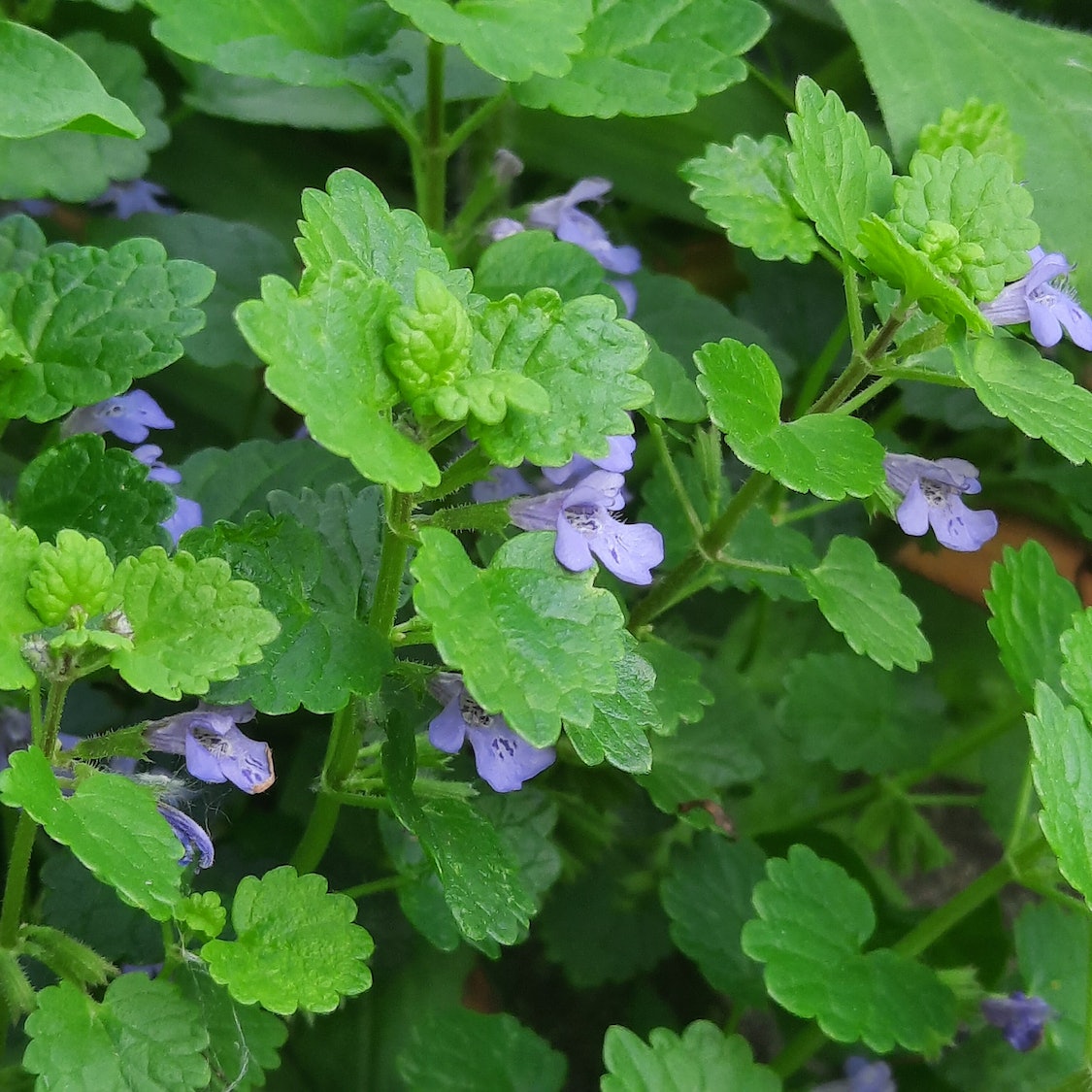 Back to my pictures. These plants are usually close to the ground (reaching heights of five to eight inches) but can grow a bit taller than that. 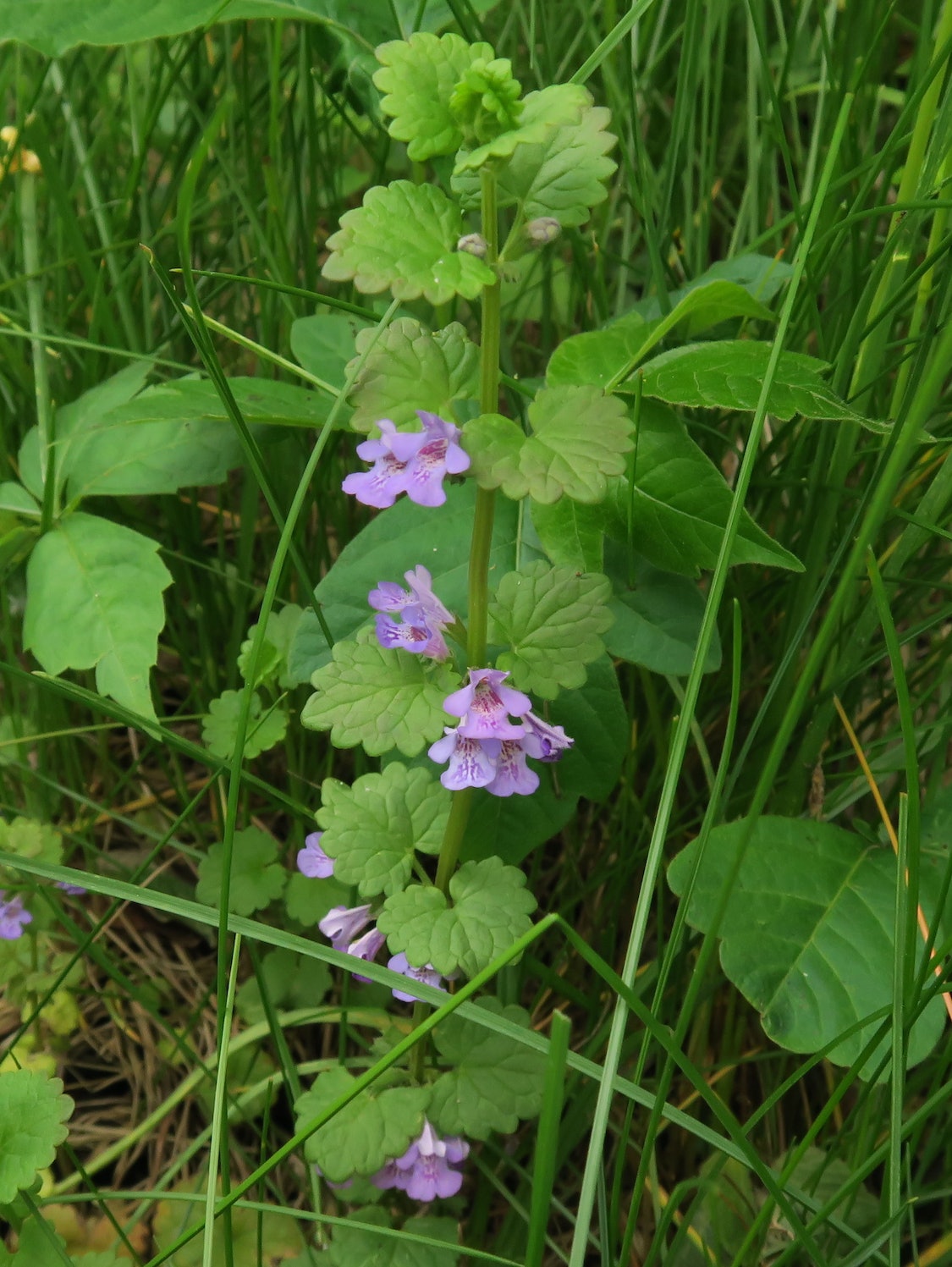 Some much taller common horsetail are growing in the background. 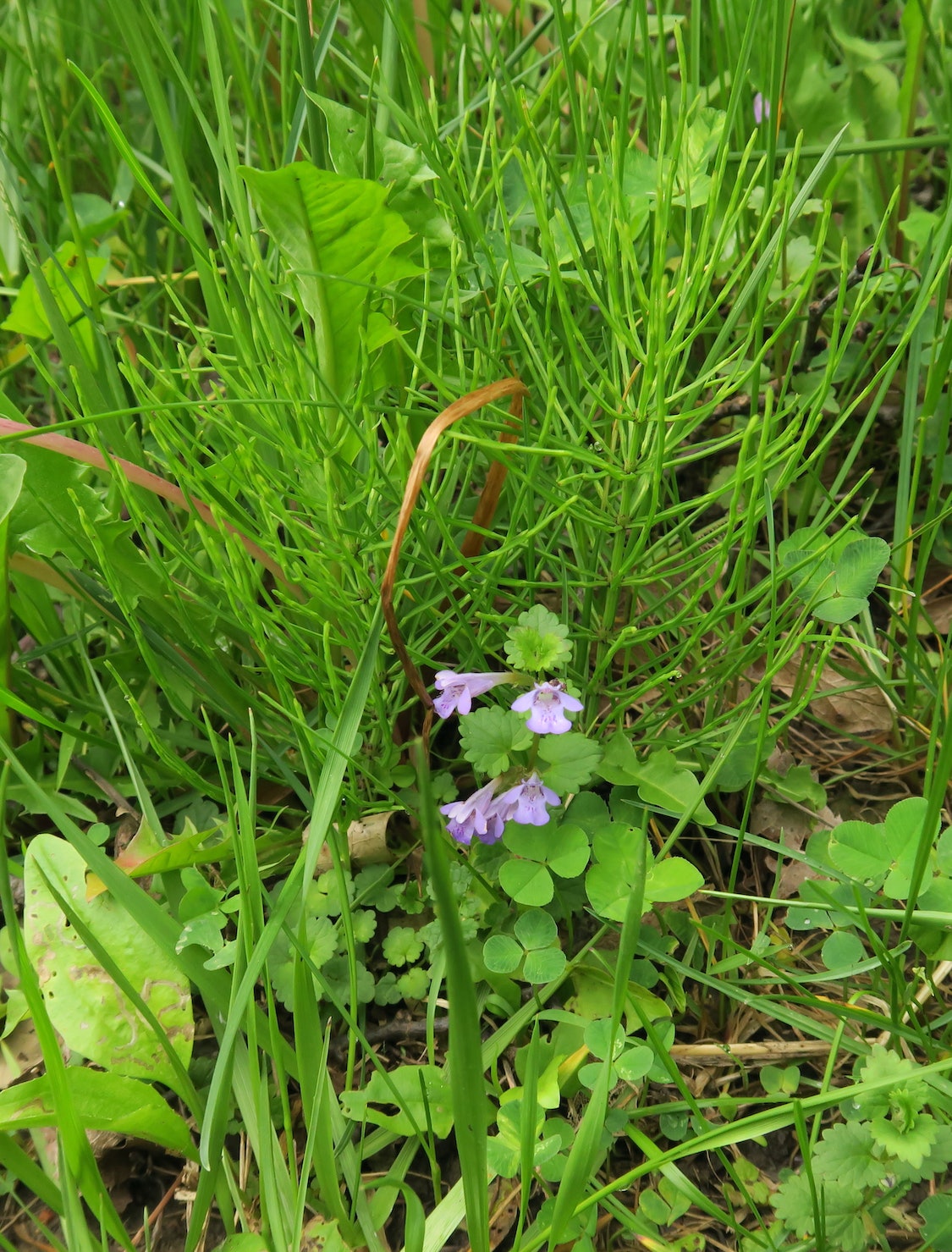 The yellow flowers are some kind of buttercup. I think the leaves taking up much of the right side of this picture are honewort. 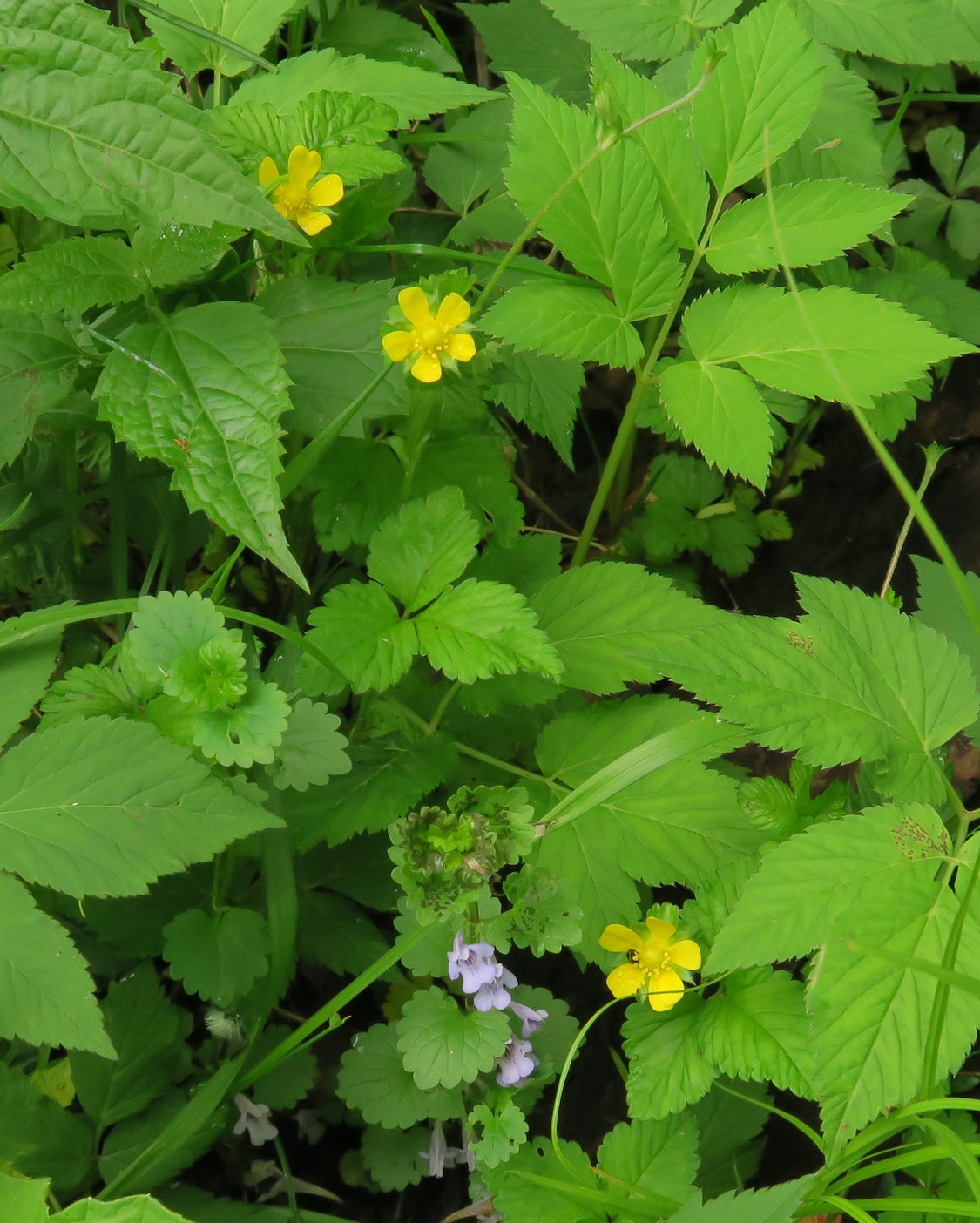 This common black snakeroot plant is about twice as tall as the ground ivy and is just starting to bloom, though the tiny yellow flowers are hard to see in this shot. 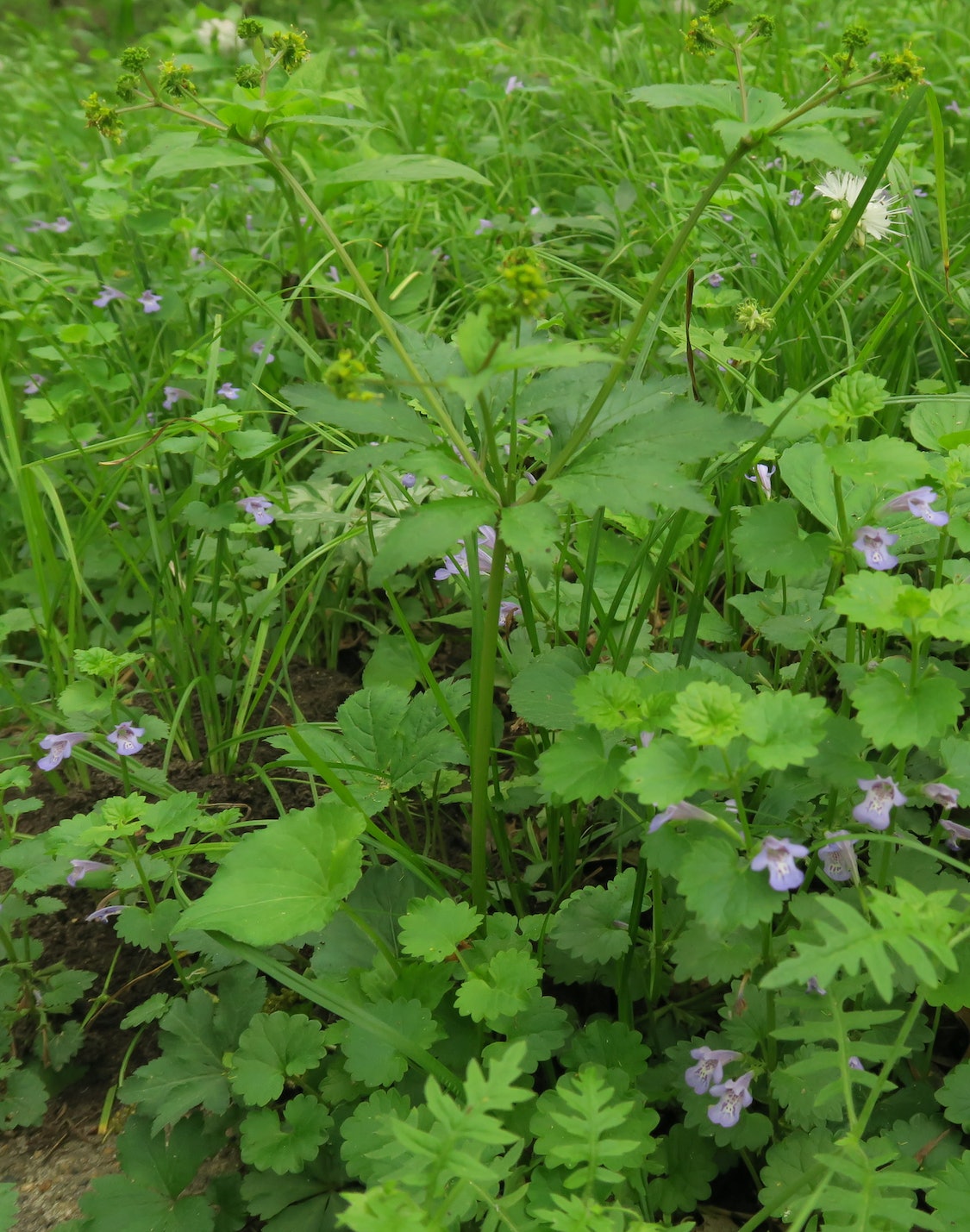 Creeping Charlie flowers are only about a half-inch long, but they look massive next to the tiny white bedstraw flowers near the center of this picture. 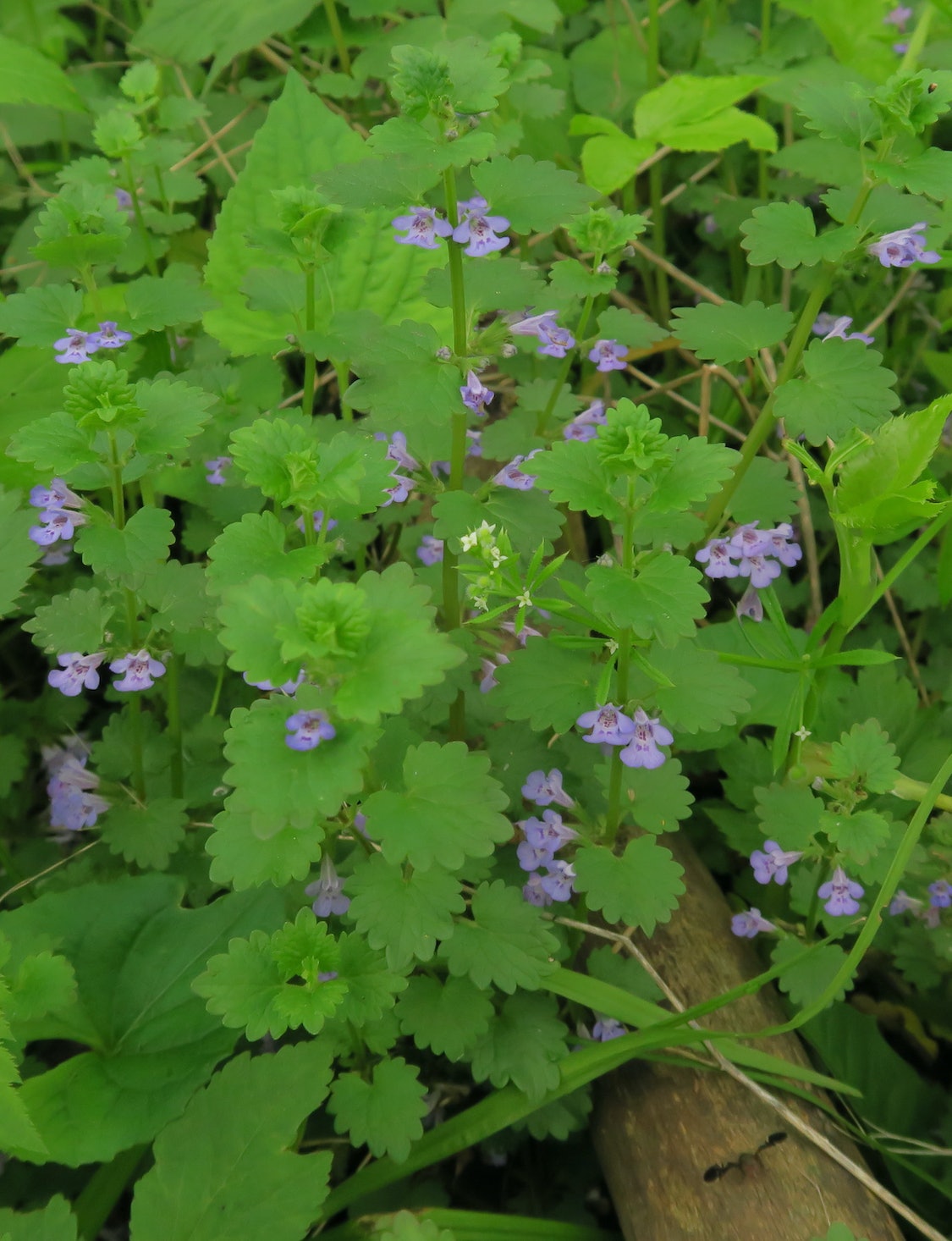 The plants flowering in the foreground here are Aunt Lucy, a native species. 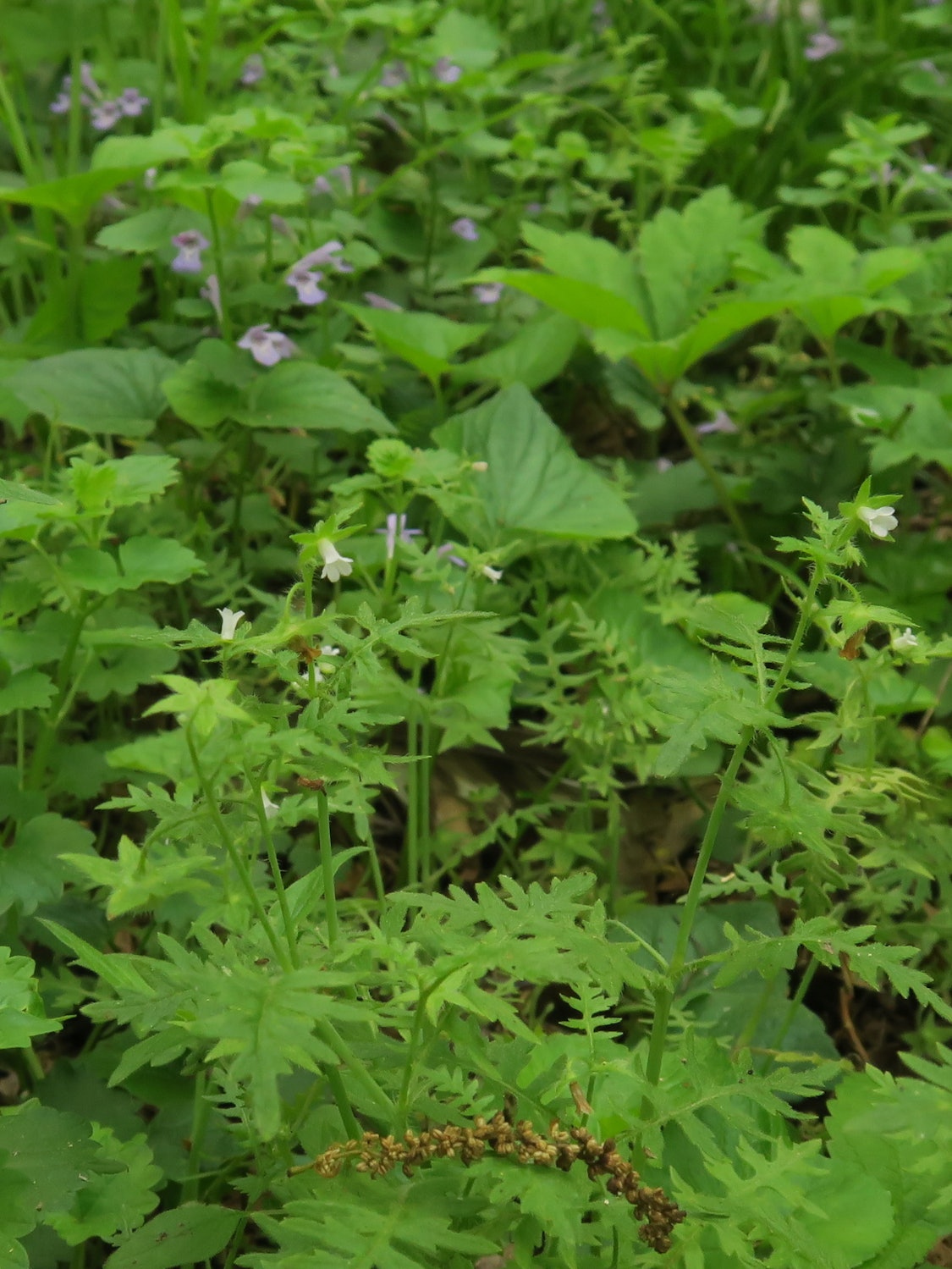 I think the white flowers on the left are common chickweed, which like ground ivy came from Eurasia. 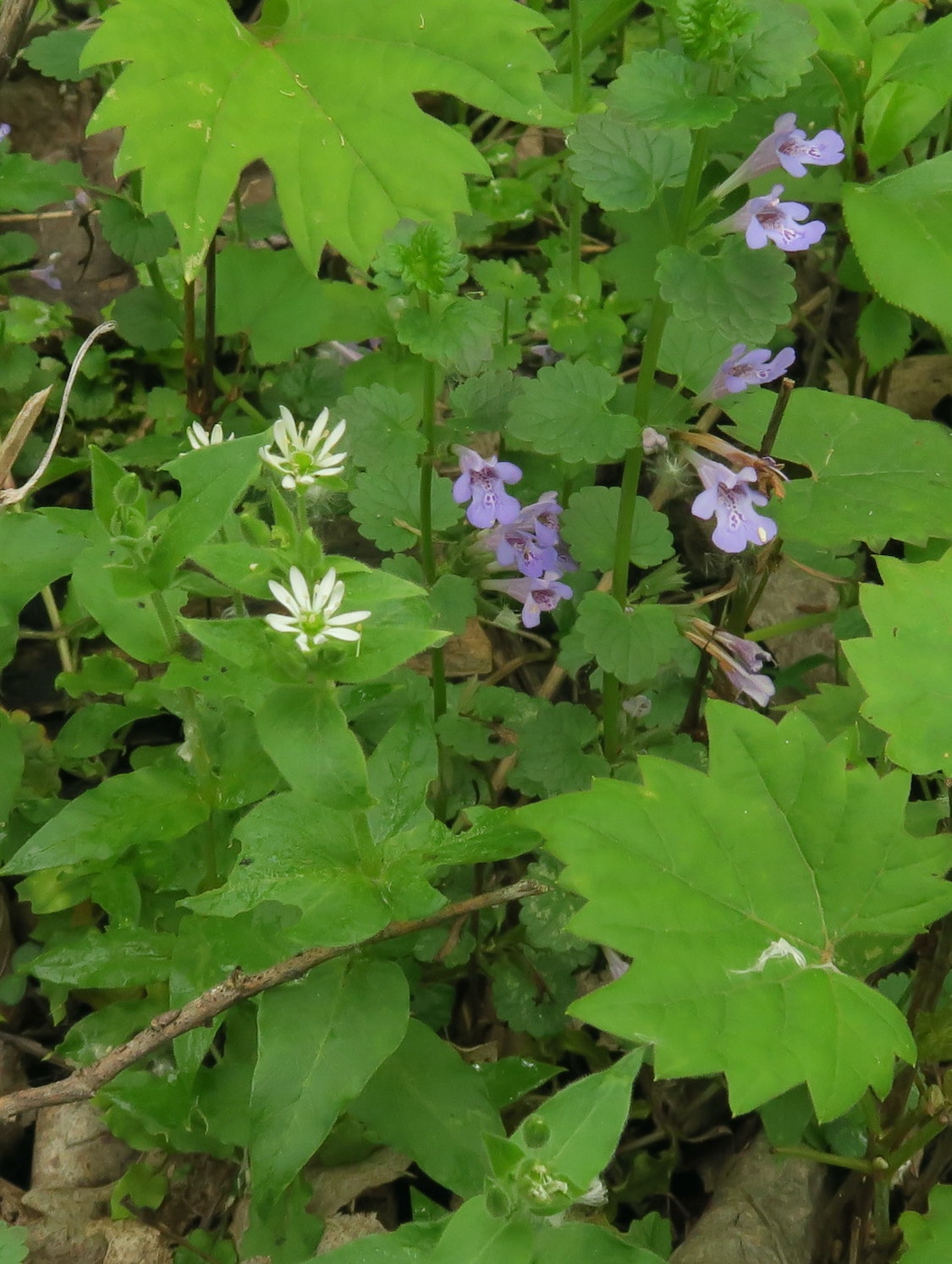 I will be back in a few weeks, when these black raspberry flowers should develop into ripe berries. 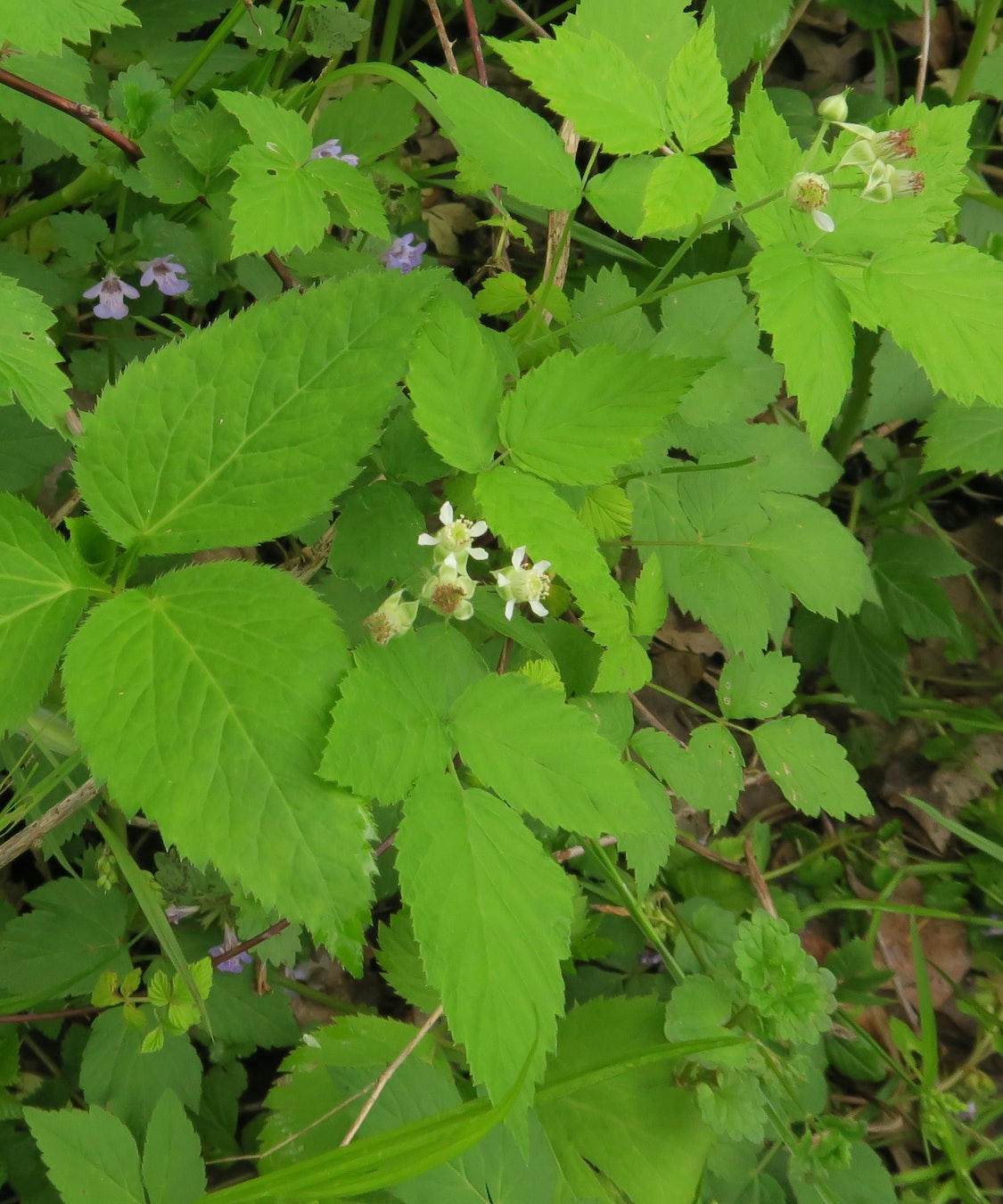 I believe the large leaves dominating most of the frame here belong to Jerusalem artichoke plants. 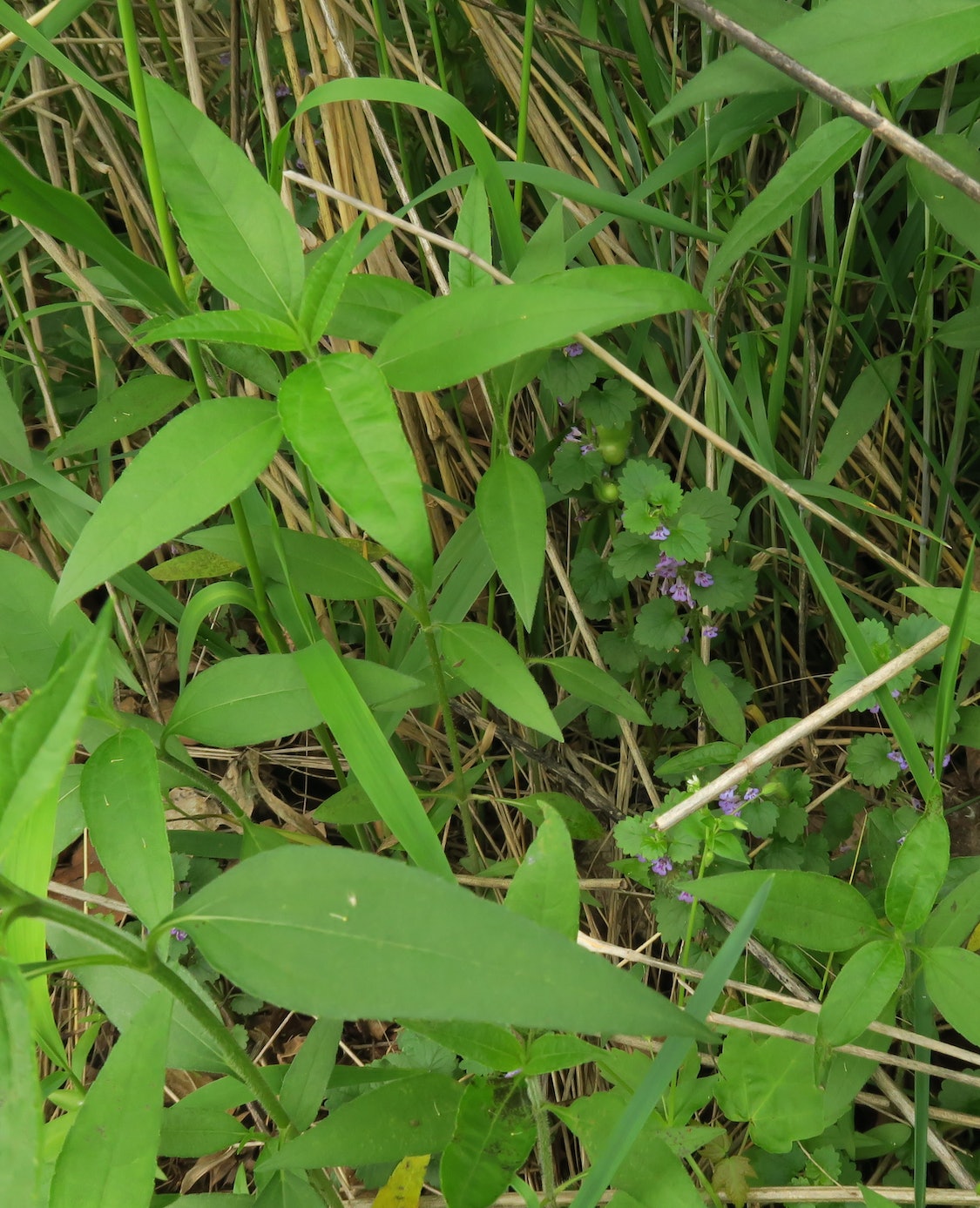 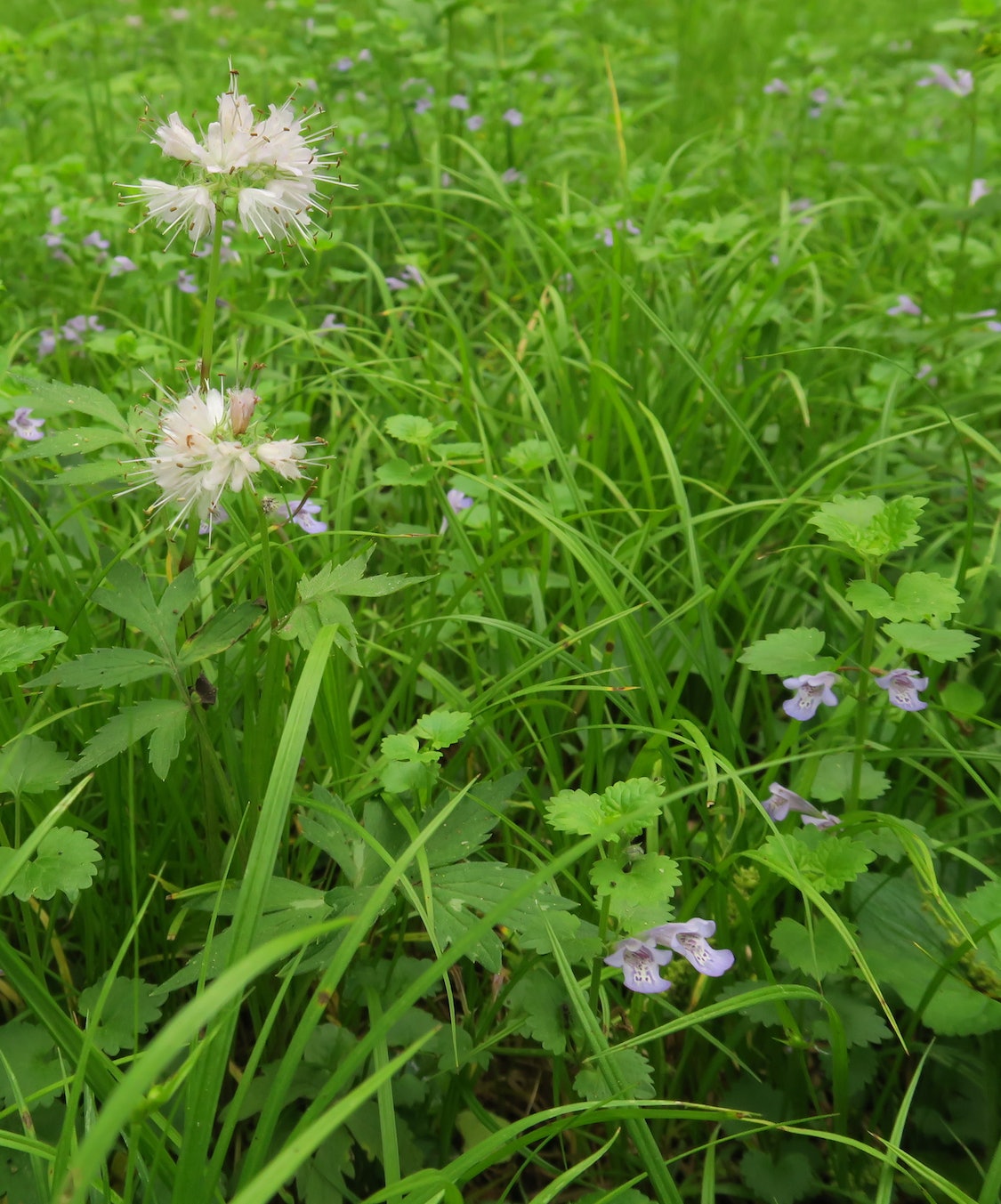