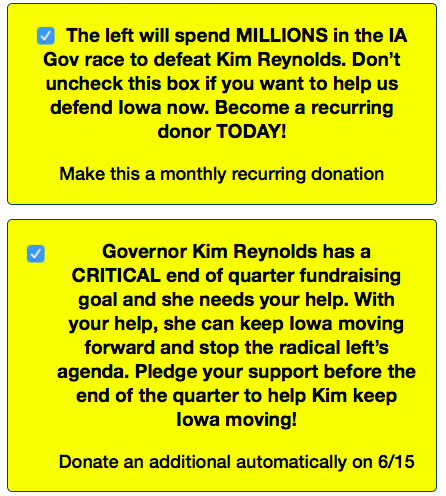 The Iowa Ethics and Campaign Disclosure Board may discuss whether to regulate campaigns pre-selecting recurring donation options, according to executive director Mike Marshall.

In May, the Federal Election Commission unanimously recommended that Congress ban the practice, which Donald Trump’s campaign used to raise enormous sums in 2020. Many of Trump’s supporters did not realize they were committing to recurring gifts and later asked for refunds or filed fraud complaints.

At least three Iowa Republican office-holders–Governor Kim Reynolds and U.S. Representatives Ashley Hinson and Mariannette Miller-Meeks–adopted the tactic this year. Some of their fundraising pages on the WinRed platform have two boxes pre-selected: one for a recurring monthly donation, and one for an additional contribution on a specific date in the near future.

Marshall told Bleeding Heartland in a May 13 email, “The Board has not discussed this issue, but based on the unanimous recommendation of the FEC the topic certainly is worthy of consideration for a proposed bill next legislative session.” The topic wasn’t on the agenda for the board’s May 26 meeting. Marshall said said board members usually discuss policy ideas at their summer meeting (scheduled for August this year) and approve draft bills to submit to the state legislature in the fall (they will meet again in November).

Marshall confirmed that any legislation Congress might approve to address the fundraising practice “is highly unlikely to apply to state campaigns.” In other words, even if a new federal law prohibited campaigns for federal offices from pre-checking the recurring donation boxes, the Reynolds campaign could continue to do so in the absence of a new state law or rule.

However, Congressional action “could have an impact if national online platforms chose to comply across the board and not just with respect to federal campaigns,” Marshall said.

I sought comment from the six members of the Iowa Ethics and Campaign Disclosure Board on whether they might address pre-selected recurring donation options, either through a non-binding advisory to Iowa candidates and committees, or by introducing legislation to restrict this practice. None answered questions submitted by email.

I enclose below screenshots of some Reynolds campaign fundraising pages. The “money bomb” date for an additional contribution has been shifting forward about every two weeks and is currently set for June 15.

The governor’s campaign also recently edited the text in the first pre-checked box from a simple “Make this a monthly recurring donation” to a harder sell: “The left will spend MILLIONS in the IA Gov race to defeat Kim Reynolds. Don’t uncheck this box if you want to help us defend Iowa now. Become a recurring donor TODAY!”

Other GOP committees have adopted similar tactics. For instance, the National Republican Congressional Committee has been warning donors, “If you UNCHECK this box, I’ll be forced to tell them you’ve deserted Trump for Socialism.”

Bleeding Heartland’s review of Iowa campaign pages on ActBlue, the most popular fundraising platform for Democratic candidates, did not turn up any that automatically select recurring donations. ActBlue has allowed user pages to make that the default option but may soon change that policy.

An ActBlue spokesperson confirmed via email on May 17,

Fundraising page for Kim Reynolds’ campaign, viewed on a computer on June 8: 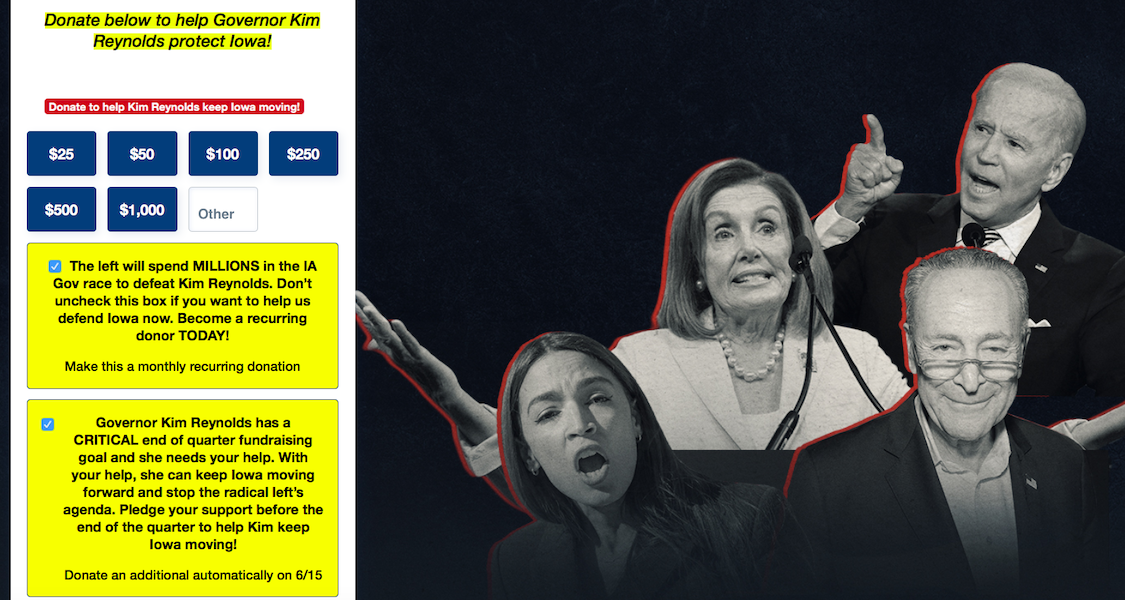 Fundraising page for Kim Reynolds’ campaign, viewed on a computer on June 4: 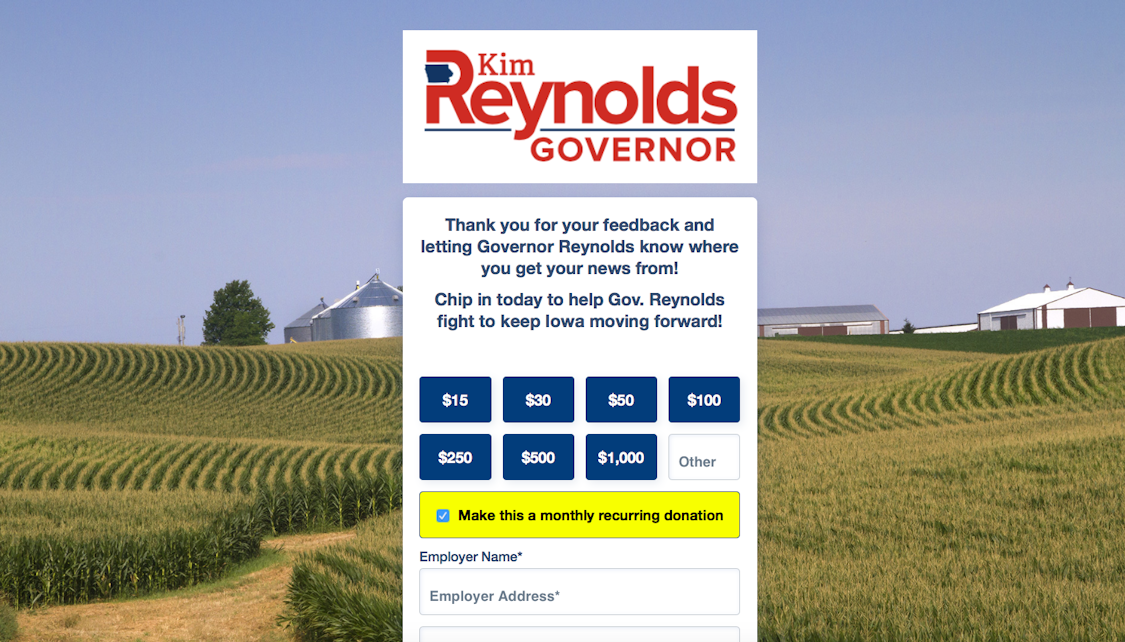 Fundraising page for Kim Reynolds’ campaign, viewed on a computer on June 1: 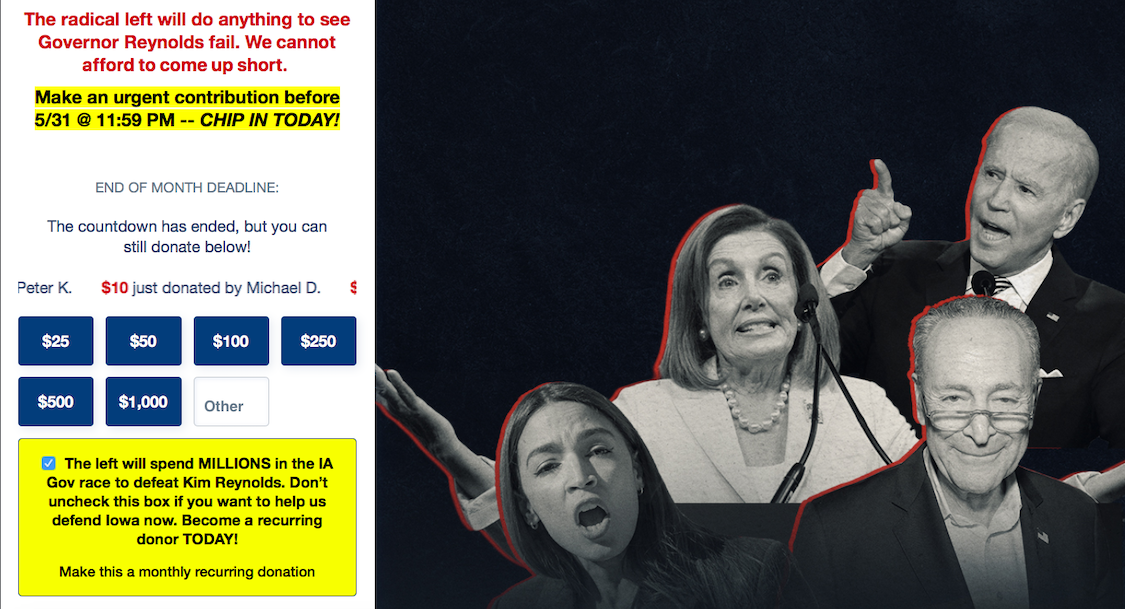 Fundraising page for Kim Reynolds’ campaign, viewed on a phone in late May 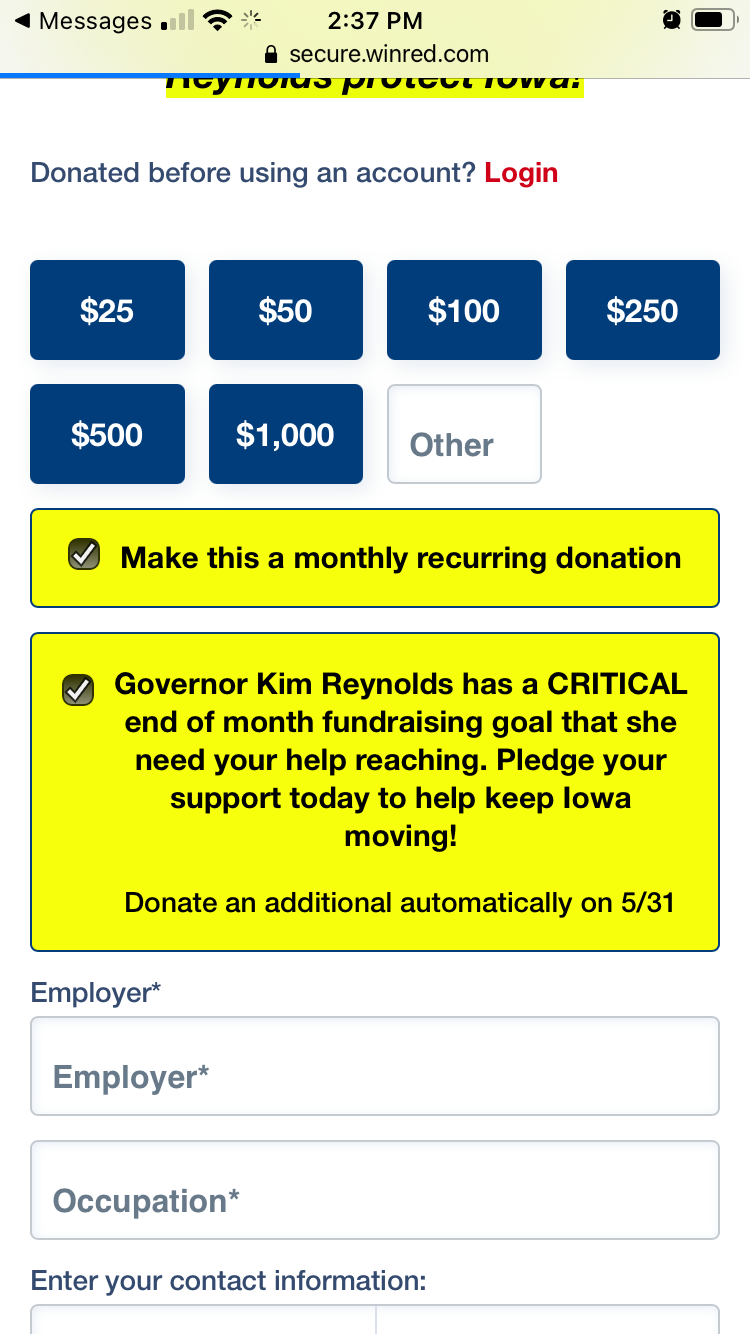 Fundraising page for Kim Reynolds’ campaign, viewed on a computer on May 17: 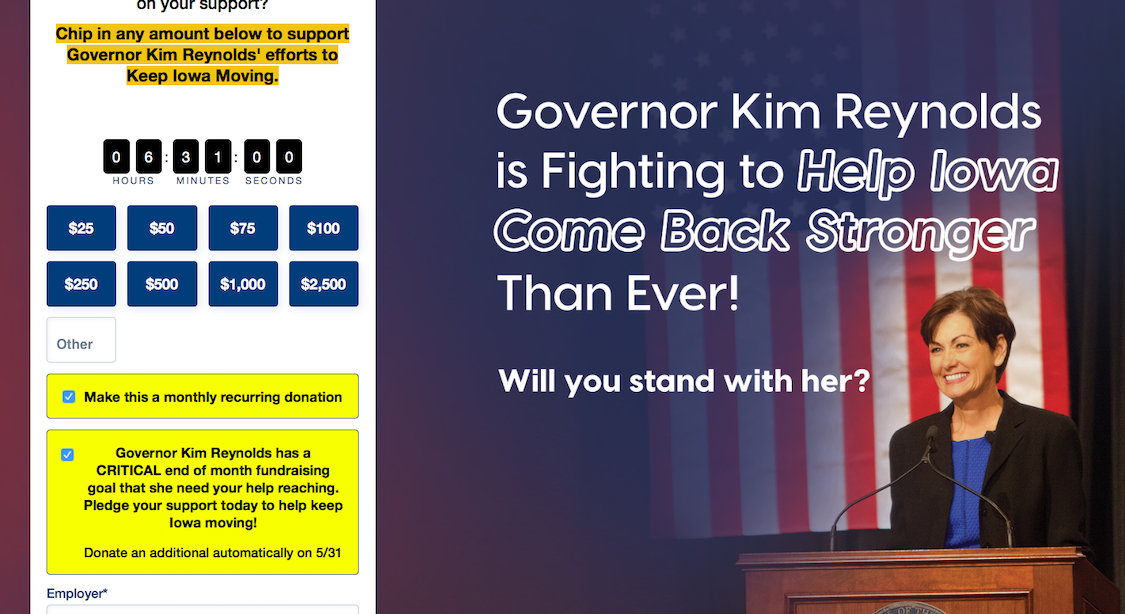 Fundraising page for Kim Reynolds’ campaign viewed on a cell phone on May 14: 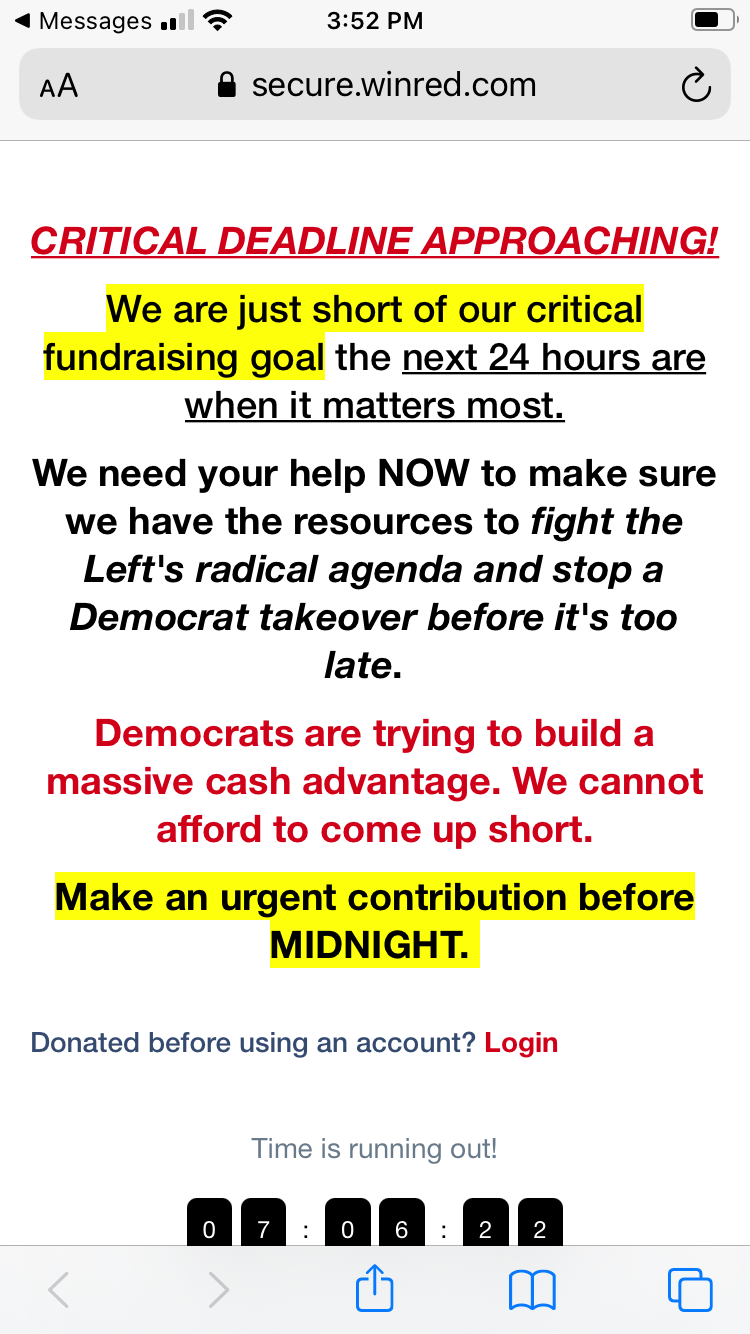 Scrolling down the screen: 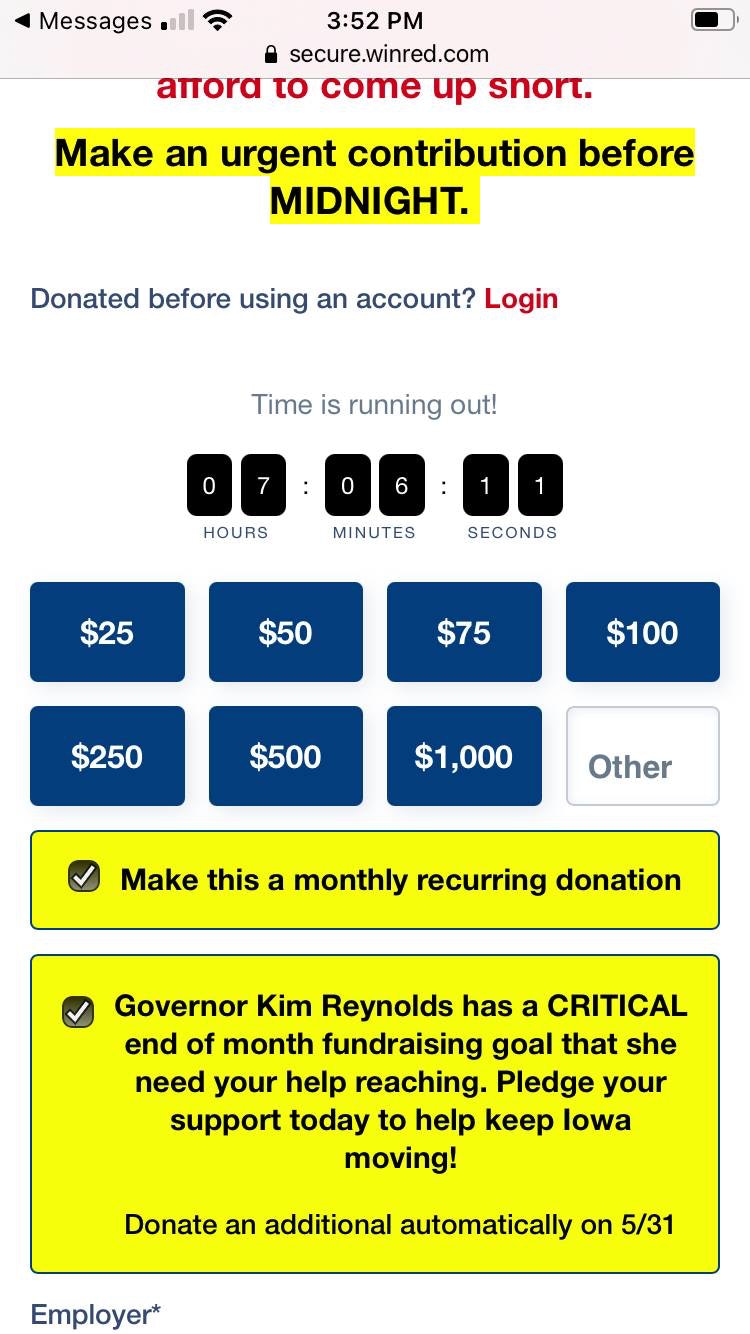