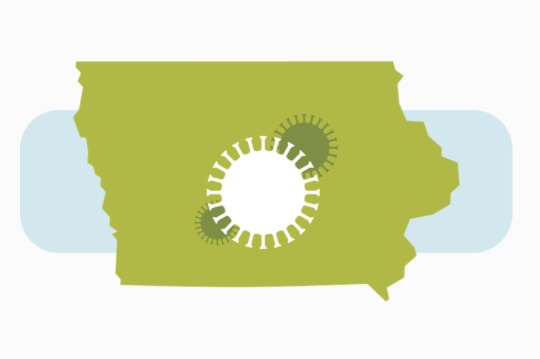 Records obtained and sources interviewed by Becker indicated that Co-Diagnostics went to a small regional hospital in Utah to validate its PCR tests while seeking Food and Drug Administration approval, instead of using equipment at Utah’s Public Health Laboratory. Senior state officials pushed for allowing the tests to be used in the Test Utah program prior to FDA emergency use authorization. In addition, the FDA issued the emergency approval more quickly than expected, even though officials within the federal agency reportedly “had concerns because Co-Diagnostics tests were manufactured in China.”

The SEC began asking Utah officials questions in late April, Becker’s reporting shows. That was a few weeks after Test Utah launched and one week after Governor Kim Reynolds announced her administration had partnered with the same Utah-based companies for Test Iowa.

Infectious disease specialists in Utah were already sounding the alarm because state data showed people using Test Utah were testing positive for COVID-19 at less than half the rate for Utahns tested elsewhere. (The same phenomenon was noticed in the Test Nebraska program, involving the same companies.) An attorney with the SEC’s Enforcement Division had questions about the Test Utah contracts and subcontracts, and asked specifically about “concerns that have been raised about the reliability of the tests manufactured by Co-Diagnostics.”

The company’s chief science officer asserted in a May 2020 press release, “In countries where we have been evaluated against other [COVID-19] tests, we have consistently and repeatedly achieved 100% clinical sensitivity and specificity. And you can’t do better than that.” Becker reported last week,

Any findings and the status of that [SEC] investigation are among the legal and ethical questions still unresolved today, as three pending federal lawsuits (consolidated into a class-action and two other complaints from six) accuse Co-Diagnostics of “manipulative and deceptive practices.”

While negotiating new Test Utah contracts last August, public health officials “forced TestUtah to stop working with the two testing partners it had chosen — Salt Lake City company Co-Diagnostics Inc., which had supplied its testing kits, and Orem’s Timpanogos Regional Hospital, which had processed them,” Nate Carlisle and Erin Alberty reported for the Salt Lake Tribune last October. Federal inspectors had determined in May 2020 that the small hospital’s lab was “not in compliance” with certification guidelines.

Health officials in Tennessee pushed back hard against that state’s $26.5 million no-bid contract with Nomi Health, Phil Williams reported last year for Nashville’s News Channel 5. A deputy director of the Tennessee Public Health Laboratory warned that “Using a less sensitive test has the potential to give false-negative results,” and said “Nomi laboratory equipment is not novel or groundbreaking technology.” The Tennessee governor’s administration ended up paying the Utah company “almost $6 million to get out of the contract.”

The original $26 million Test Iowa contract called for Nomi Health to provide 540,000 PCR tests over six months. Those were sourced through Co-Diagnostics and processed at the State Hygienic Laboratory in Coralville. Iowa didn’t bail on the tests, despite a high percentage of “unusable” results in the early months. The Test Nebraska program also continued to use the tests, at least through early December 2020.

The Iowa Department of Public Health refused to segregate Test Iowa data from other results reported on the state’s COVID-19 website, so outsiders were never able to confirm whether Iowans using the Co-Diagnostics tests received fewer positive results than those taking PCR tests through other health care providers.

In July 2020, senior Iowa officials including the governor filmed a promotional video for Domo, one of the Test Iowa subcontractors. Talking points distributed to Reynolds and others before those film sessions encouraged leaders of Iowa’s COVID-19 response to mention several companies working in partnership with Domo–Nomi Health, Qualtrics, and Chatfunnels–but did not mention Co-Diagnostics.

The Co-Diagnostics company logo still appears on the Test Iowa website at the bottom of the front page. However, Iowa Department of Public Health spokesperson Sarah Ekstrand told Bleeding Heartland on June 22 that the program has not used the company’s test kits since early January.

TestIowa switched to ThermoFisher TaqPath in January so that both the molecular lab and the Test Iowa lab would be using the same product. We did this when the initial purchase of CoDiagnostics test kits ran out, and the switch was made to streamline inventory control. From Tuesday, January 5, 2021 forward Test Iowa has used the ThermoFisher TaqPath assay exclusively.

Ekstrand did not reply to a follow-up question about whether state officials had any concerns about the accuracy or sensitivity of the Co-Diagnostics tests.

Test Iowa is winding down its operations. Drive-through sites in Council Bluffs, Cedar Rapids, and Waterloo will conduct their last tests this week, and the remaining Test Iowa clinics and drive-through sites will close no later than July 16. The Iowa Department of Public Health has said Iowans will be able to receive “at-home COVID-19 test kits free of charge to Iowa residents following the closure of the Test Iowa sites.” Details about those tests are not currently available.