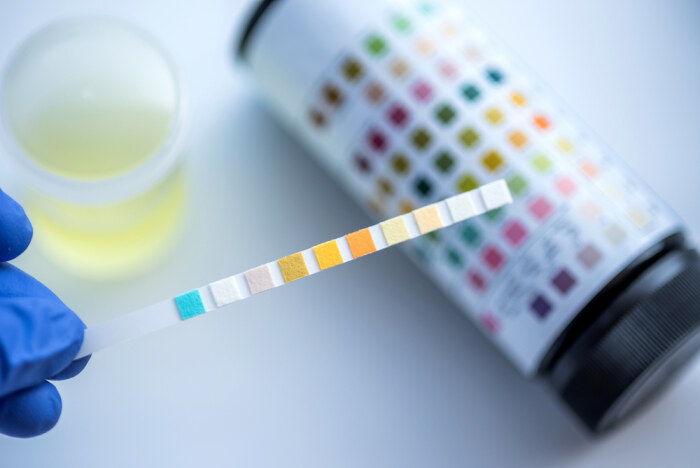 A private sector employee from Iowa goes across the border on a Friday after work to Illinois. His friends offer a blunt, and he takes a hit. He thinks nothing of it, because recreational use of pot is legal in Illinois. On his way home on Sunday, he realizes that there could be a random drug test early in the week. He's heard marijuana will stay in his system for up to 30 days, so he purchases a package of fake urine at a vape shop.

Monday morning, he is asked to take a drug test. He manages to get the fake urine into the beaker without anyone seeing him.

Days later, a lab result indicates that he may have used fake urine. Depending on a union contract, an employee handbook, or company policy that has been posted conspicuously, the employee may be disciplined, or in a severe case terminated. Now, he can also be arrested for a simple misdemeanor.

House File 283 creates “the criminal offense of defrauding a drug or alcohol test,” and establishes the penalty for the offense as a simple misdemeanor for the first offense and a serious misdemeanor for subsequent offenses, punishable by up to one year in prison as well as a fine.

The Iowa House approved the bill by 61 votes to 30 in February, after only a few minutes of debate. Of course, what’s the sense in debating a bill that is rammed down the minority party’s throat? Seven Democrats (Wes Breckenridge, John Forbes, Eric Gjerde, Steve Hansen, Kenan Judge, Kristin Sunde, and Phyllis Thede) joined most Republicans in support, while GOP State Representatives Jeff Shipley and Joe Mitchell joined most Democrats in voting no.

The governor signed the bill in March, and it took effect on July 1.

This must be one of the most wasteful uses of legislators’ time. It reminds me of two other bills I saw enacted over the years. In the 1990s, an Iowa law created the crime of not returning a video cassette to a movie rental business. I know of no law enforcement officer who has ever been engaged in arresting someone for not returning “Back to the Future” or any other videos. It’s not worth their time. They will tell you that.

Then, not that long ago, the Iowa legislature made it a crime to fail to return farm equipment to an implement rental provider. As a lobbyist, I argued that such a matter is for a civil court, not a criminal court. I have no idea how many law enforcement hours have been used to corral lost implements of husbandry, but I’m sure it doesn’t happen often.

This law falls into the category of law enforcement saying, “this is not worth our time to proceed with acquiring evidence, showing up in court for preliminary hearings, trials, etc.” But the real question is whether due process has been afforded to the employee.

The statutory presumption of innocence is found in the Iowa Criminal Code. It requires a person's guilt be proven beyond a reasonable doubt in criminal proceedings. Iowa Code § 701.3. We do not believe this statute implies a public policy applicable in the employment context. While a defendant charged with a crime is presumed innocent until proven guilty, this right is limited to criminal proceedings.

Why do Iowa lawmakers continue to pass bills without researching constitutional case law? One answer might be that the majority party believes the Borschel case is just an opinion, and only the legislature may create laws. But my hunch is that the word “fraud” has a powerful political pull.

As I have claimed for more than thirty years, a urine test will not indicate impairment. It will show only that there are metabolites of a substance in the body.

Have you ever had a hangover? You may not be drunk, but a urine test will show that you may still have traces of alcohol in your system. This idea of thinking that employees will conduct themselves properly without using drugs or alcohol during their private time is superfluous. The irony can be found with executives who hit the golf course or have a drink or two during the day to entertain prospective clients, but condemn the worker who tries to hold on to employment when the circumstances and odds are against her.

At the least, a conspicuous notice of some sort should be posted where employees can see it, warning them of the criminal act and its consequences. In the long run, it might lead to a less expensive practice. Not giving proper notice to a crime could lead to a dismissal of the criminal case and cost an employer punitive and compensatory damages. A notice requirement should have been included in the bill.

If the employee is at-will, which most Iowa employees are, why don’t employers just fire them? Why is it necessary to have these feel-good laws that a lobbyist may have sold to a client to show that they can get a law passed?

Next up: Iowa National Guard troops searching vehicles for liquor that was purchased across state lines, in order to avoid paying Iowa’s higher booze taxes.

Editor's note: This post first appeared at the author's blog.